So the next James Bond movie will be here soon, we’ve been seeing photos emerging across the internet of the cast on location shooting various scenes for the new film No Time to Die. To be clear, though this is being dubbed a 50th Anniversary watch, it’s not the 50th anniversary of James Bond movies, which started with Dr No in 1962. It is the 50th anniversary of the film On Her Majesty’s Secret Service, but exactly what impact that has on this watch is unknown. I feel it may be Omega’s marketing finding something else to celebrate 50 years of, they’ve already done the moon landing. Not to say this is a bad product, because I think it looks great, but the influence of that movie is missing in this tribute. Aston Martin’s OHMSS DBS Superleggera is a nice modernisation that takes cues from Bond’s DBS in the film. The difference is that George Lazenby wasn’t wearing an Omega in the movie, so there’s not much for them to pay tribute to. 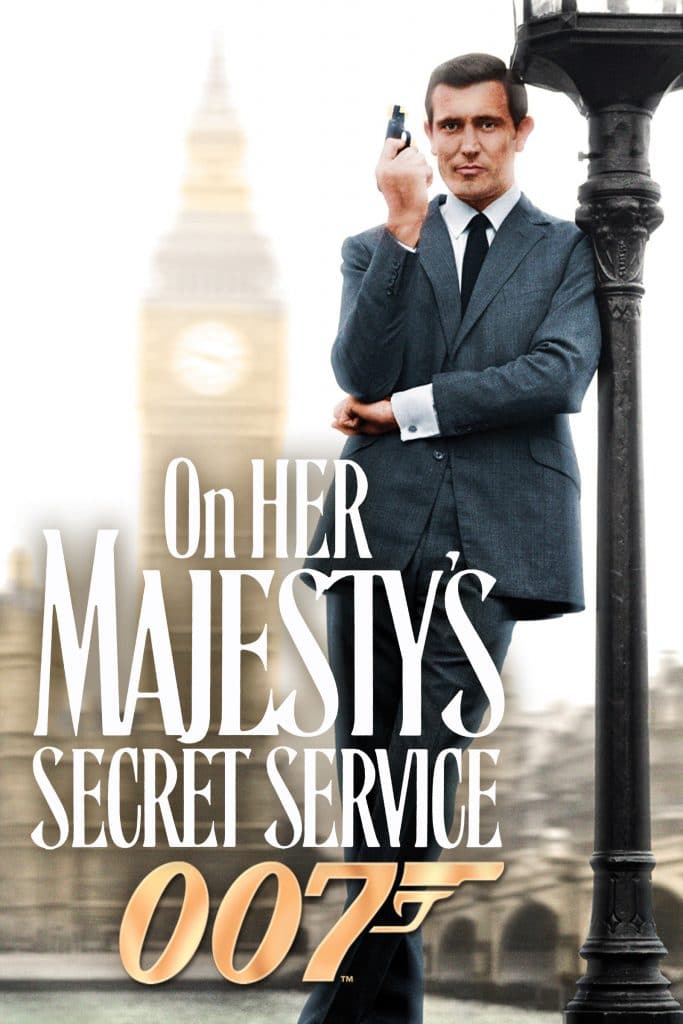 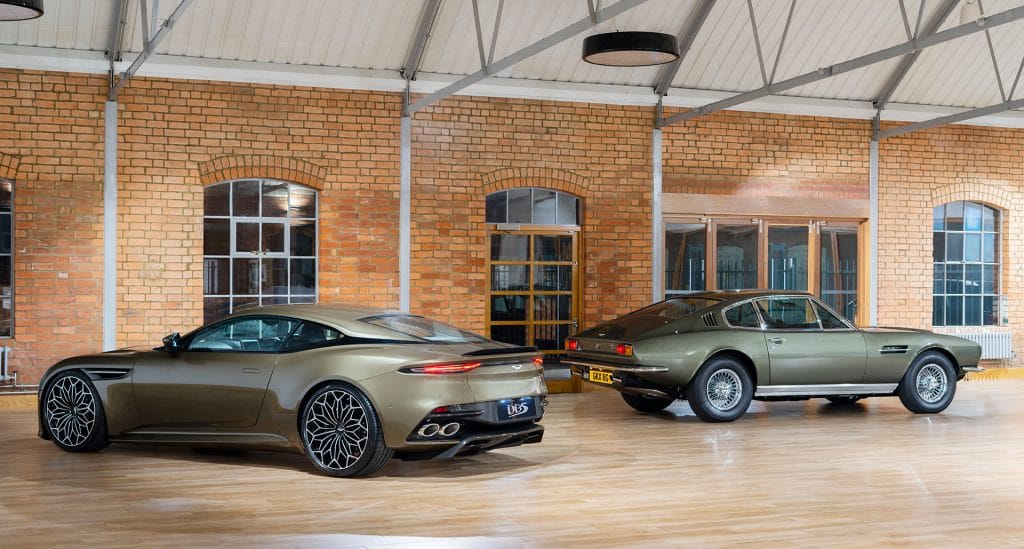 An Omega has been on 007’s wrist since Pierce Brosnan took over the role in his first film, Goldeneye, which was back in 1995 before I was even born. Viewed as one of the better Bond films, Goldeneye saw Bond teaming up with a Russian agent tracking down the corrupt MI6 agent Alec Trevelyan, played by Sean Bean. One of the triumphs of Omega’s collaboration with the James Bond franchise is that it allows the fans to buy the watches worn by Bond. Don’t get me wrong, Bond doesn’t wear the Bond variants of the watches in most of the films, but rather the standard-issue watches Omega makes. However, in the movie Spectre, we saw him escape Blofeld’s dentist chair of doom thing by using his Seamaster 300 as a countdown timer with a built-in bomb, in true Bond style. That watch was the Bond variant, so we might see him sporting another Bond watch in the next film. 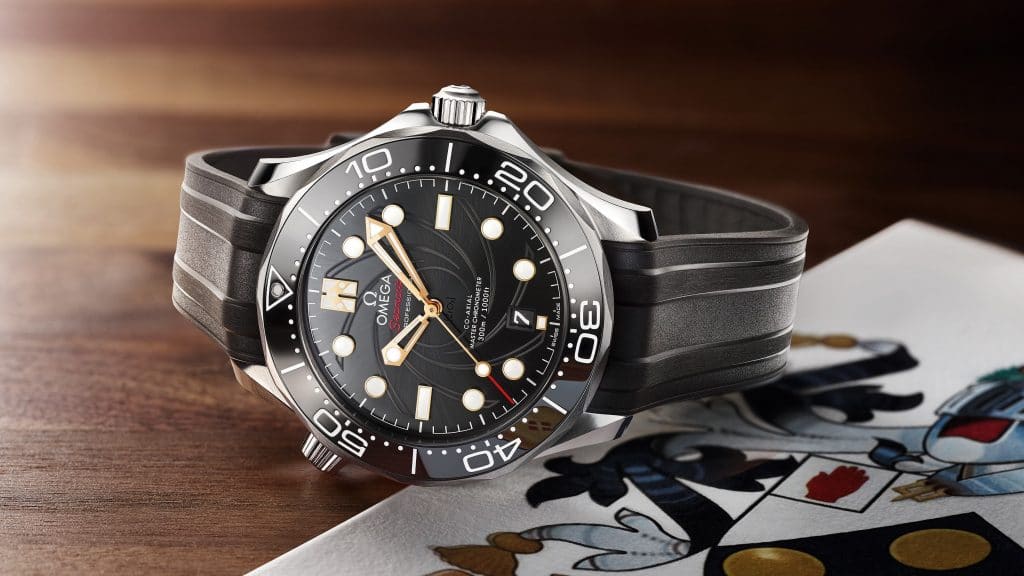 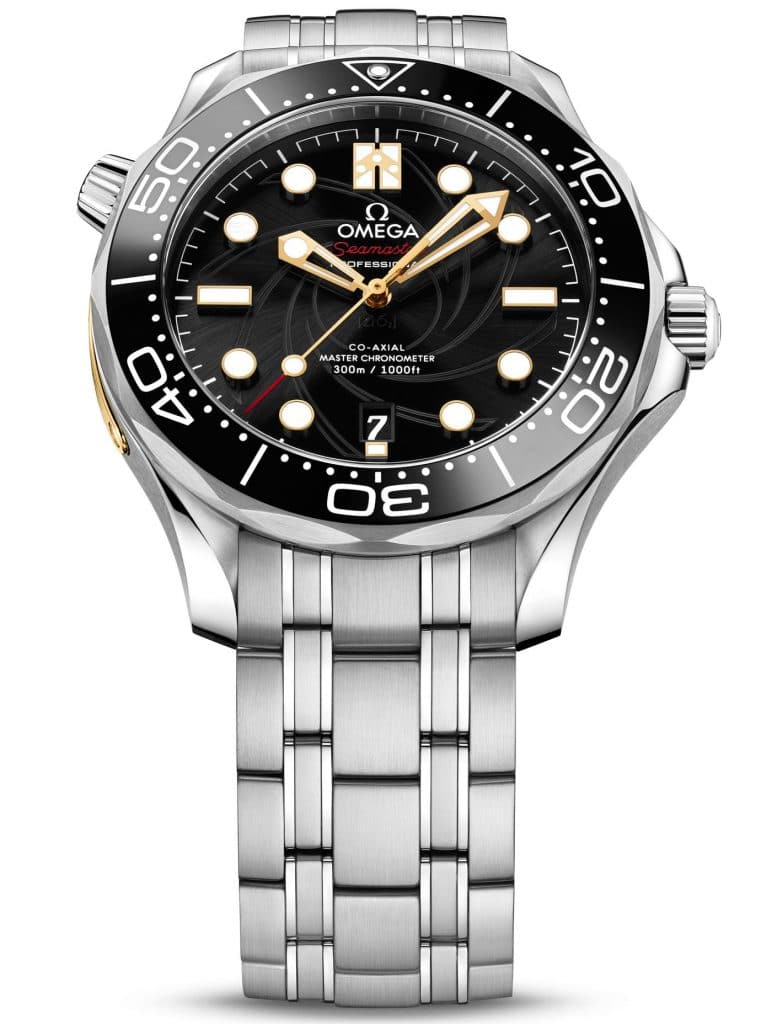 For this Bond variant, Omega used the recently revamped Seamaster Diver 300 as their base, a watch they’ve used in the past with great success like the reference 2226.80.00 for example. That watch replaced the characteristic wave dial with barrel rifling, which returns on this new Seamaster. The 12 O’clock marker now bears the Bond family crest, and the font in the date window at 6 O’clock is the 007 franchise font, rather than the standard used by Omega. While it’s not a criticism per se, it is worth noting that this all-steel watch uses 18K yellow gold for the hands and markers. That can go either way, I’ve seen watches that look good with gold hands and markers and some which look terrible, so it’s worth seeing this one in the metal before you jump in. There’s also a secret 50th-anniversary reminder here, in the 10 O’clock lume marker, the number ’50’ appears in the dark when the lume glows and disappears in the daytime. Neat. 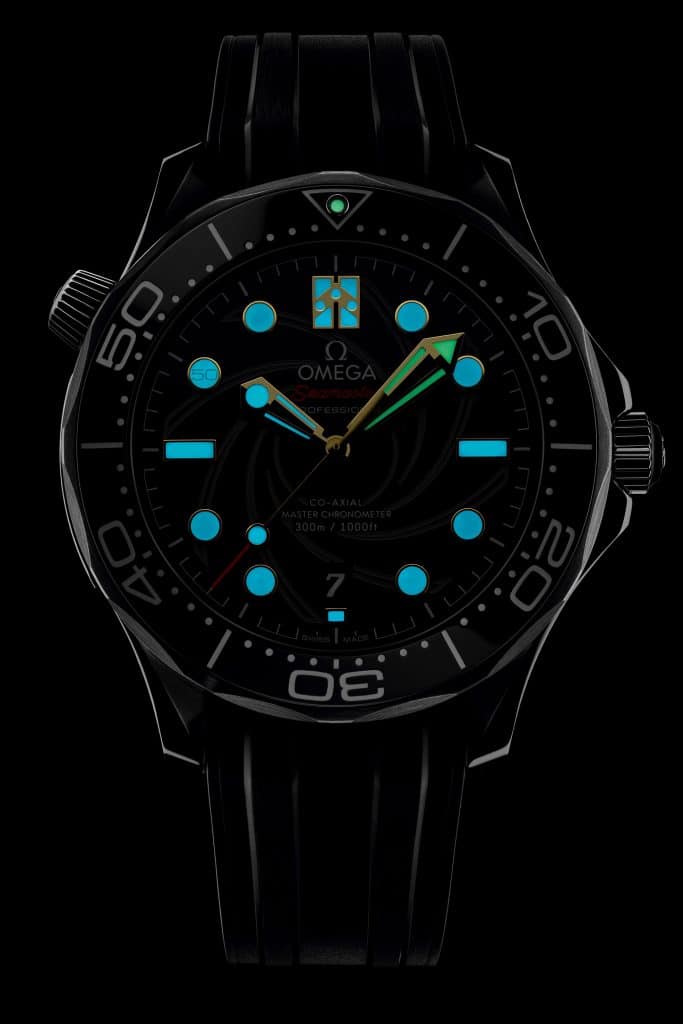 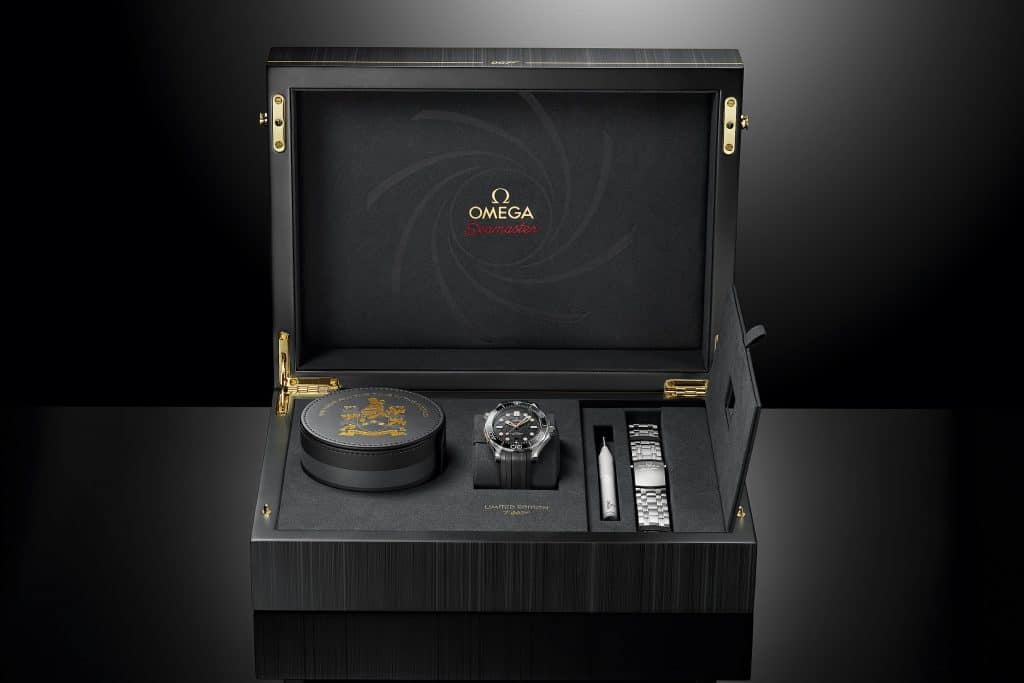 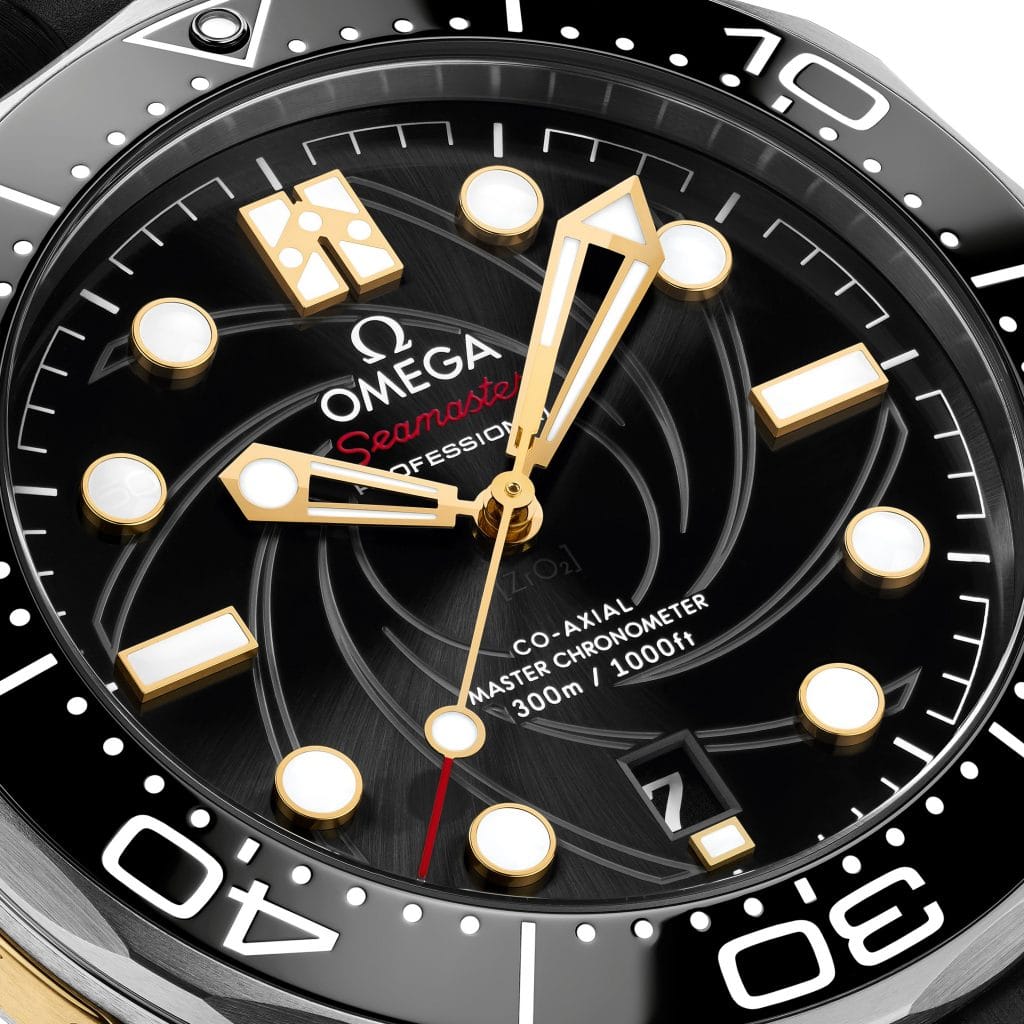 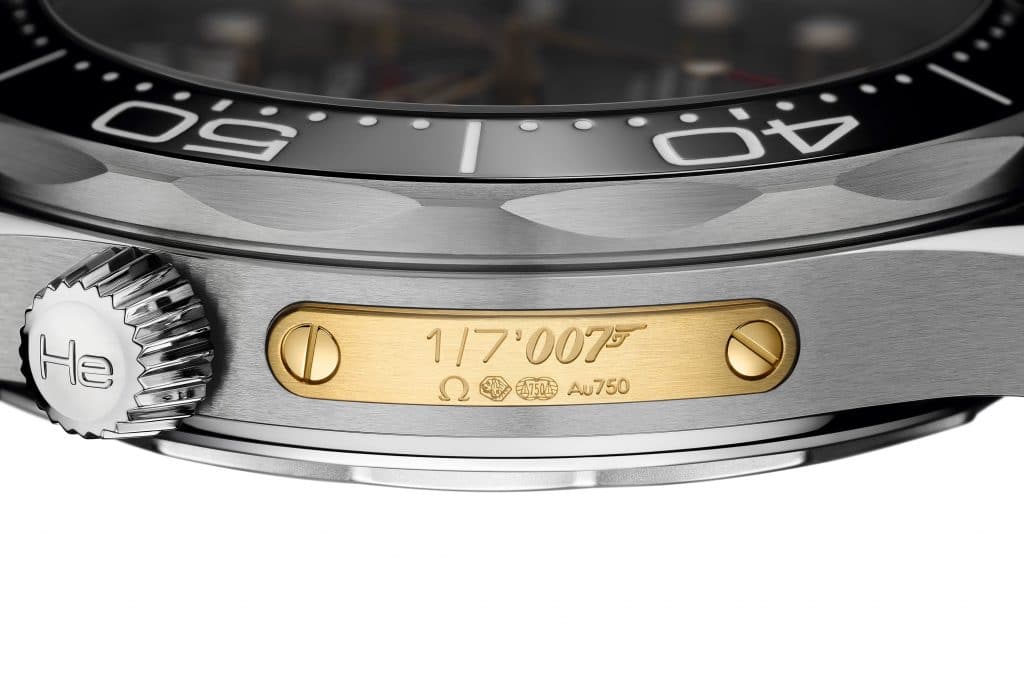 The side of the watch features an 18K gold plaque, featuring the hallmarks of the gold used and the Omega logo. It also shows you which number out of the ‘limited edition’ 7007 watches you have. How limited edition that actually is I’ll leave to you to debate. The back of the watch is the part that frustrates me the most. When Omega relaunched the Diver 300 line they introduced an open caseback which is nothing new for them, in fact, it brought it into line with the rest of their watches. But, this invites them to do what I think is a shortcut which is to print stuff on the back crystal, which they’ve done here. Covering the movement is a colourful print of the Bond family crest. I’d have liked to see a closed caseback with the crest engraved, that would be a signature touch to end on. 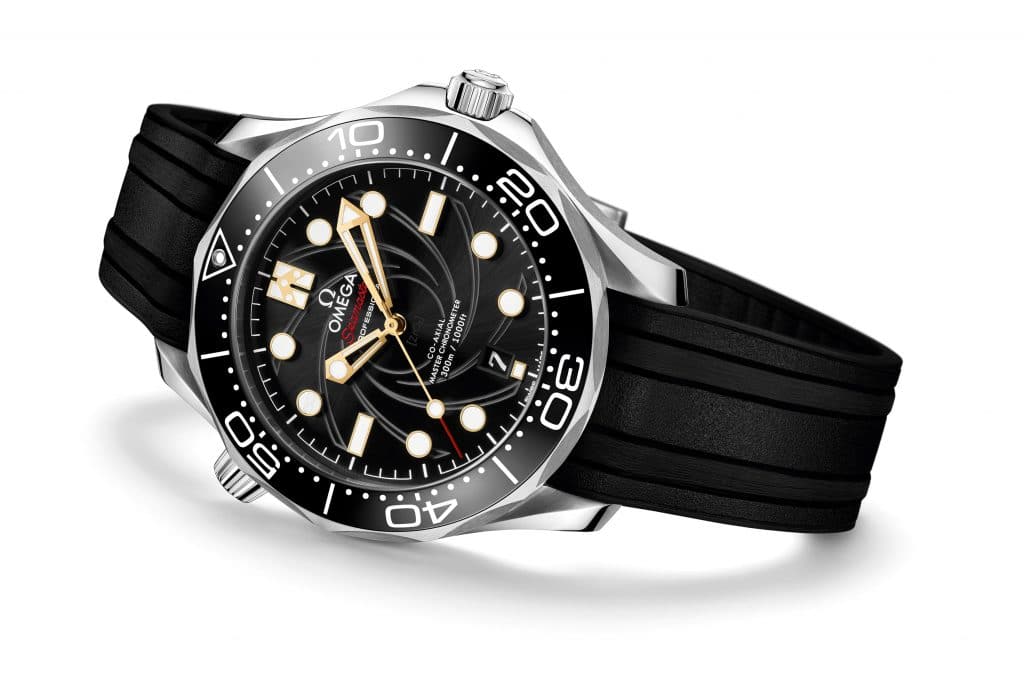 Nevertheless, I recognise there may be cost factors involved, or merely the Bond fans. One of the things I feel is essential to remember with these Bond watches is that they are not necessarily targeted at us die-hard horology lovers, but more to the film buffs and casual viewers. Sure, they may not always be the kind of people spending thousands on a wristwatch, €6100 in this case, but they’re more likely to get the word out and become buyers. With that in mind, this watch is a pretty good Bond edition.