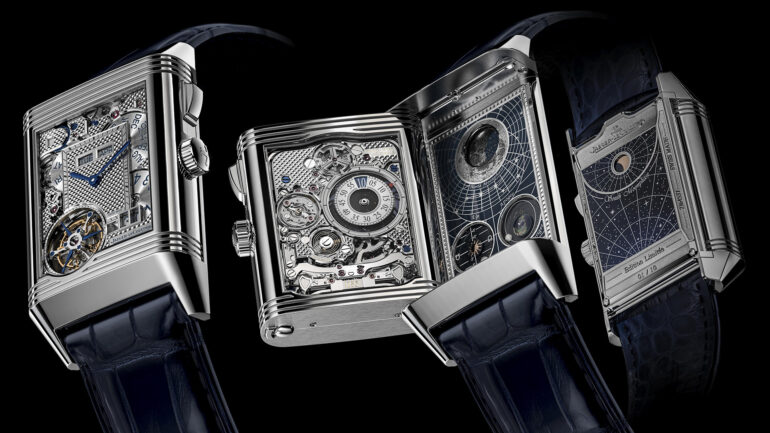 This is the most complicated Reverso Jaeger-LeCoultre has ever made.

Every so often, a watch company flexes its muscles and produces something truly unique. We’ve seen it quite a few times in the past decade, from A. Lange & Söhne’s Grand Complication, Breguet’s Tradition 7047 Tourbillon and Vacheron Constantin’s 57260 (the most complicated watch ever made). Those are all absolute beauties, but they don’t come along very often. Jaeger-LeCoultre has been a lot more active, we’ve seen a fair few complex watches from them in the last few years, and this new Reverso Hybris Mechanica Calibre 185 Quadriptyque is the latest. 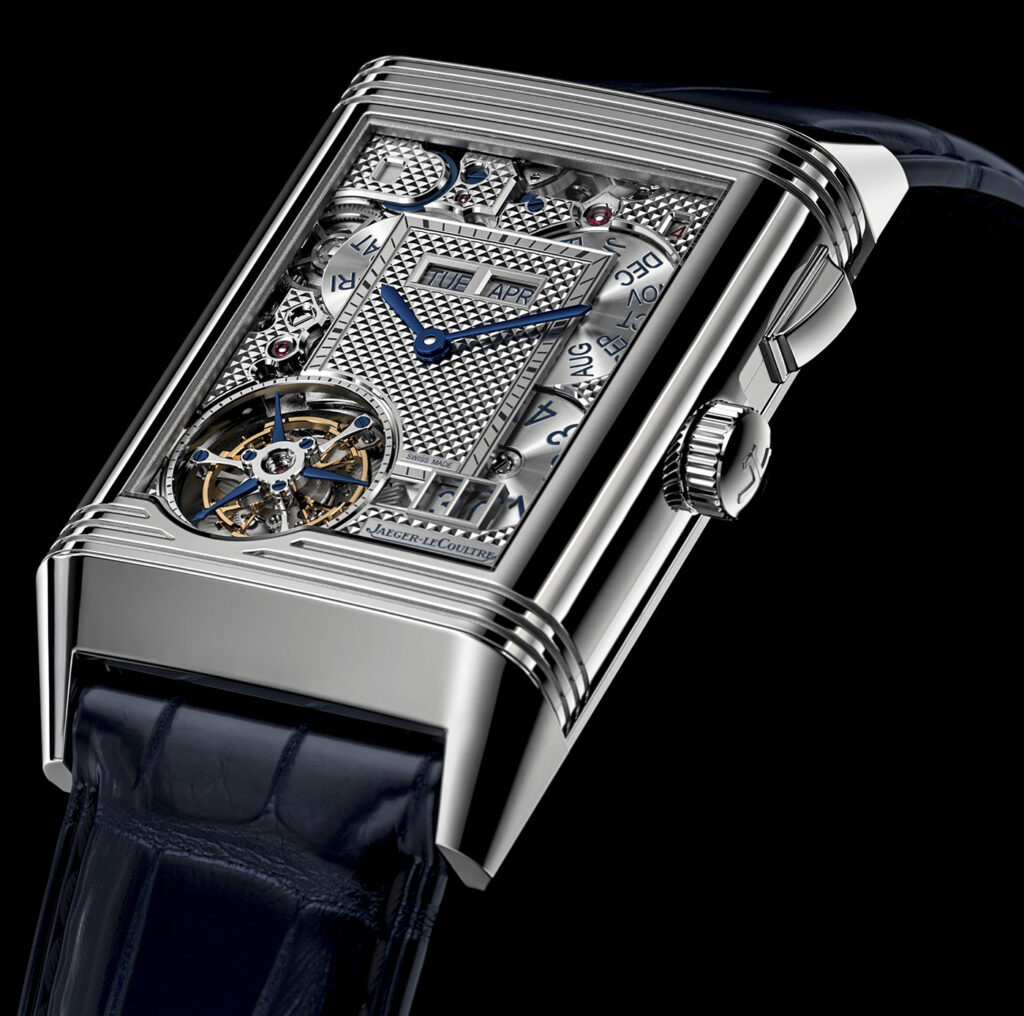 This is the most complicated Reverso model Jaeger-LeCoultre has ever made, and it has four dials and eleven complications. For comparison, the previous most complex Reverso, the Reverso Grande Complication à Triptyque, had three dials and eight complications, making it relatively pedestrian compared to this. 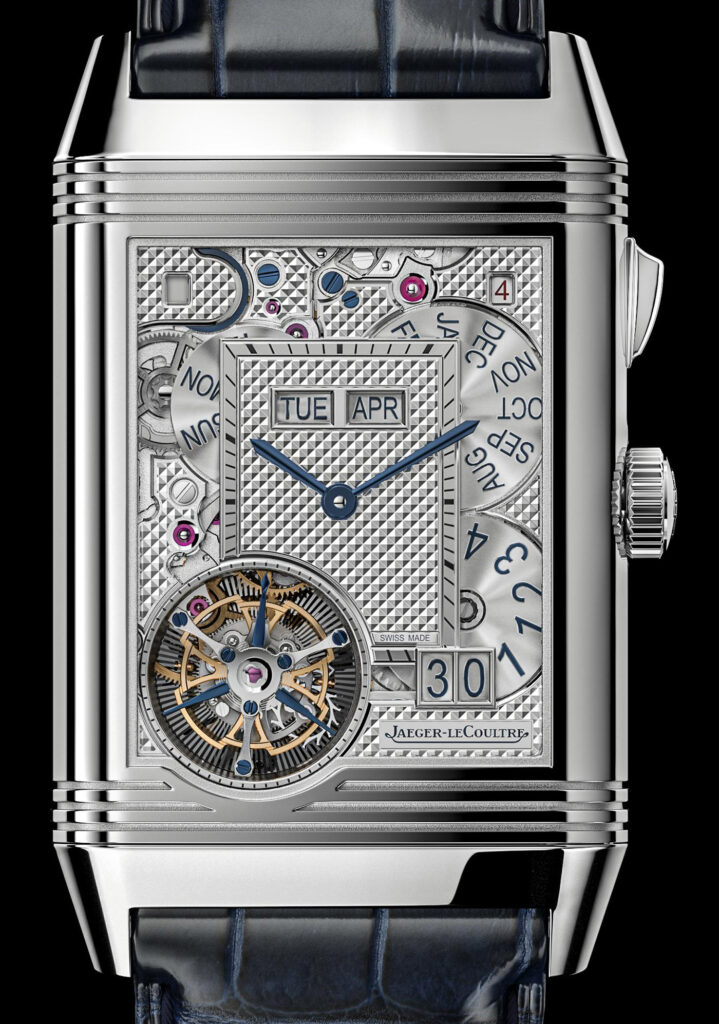 The watch retains Jaeger-LeCoultre’s classic art deco case and style, but its movement has somewhat overshadowed it. The calibre 185 is displayed on both sides of the reversible case. On the main dial are the perpetual calendar displays, including the date and a flying tourbillon for good measure. Around the back, there is the time displayed again with a digital jumping hour. The main thing that’ll catch your interest is the repeater setup. This watch has a minute repeater to chime the time on demand. In this instance, Jaeger-LeCoultre has eliminated the delay between requesting the time and the watch chiming it, as you see on other repeating watches. 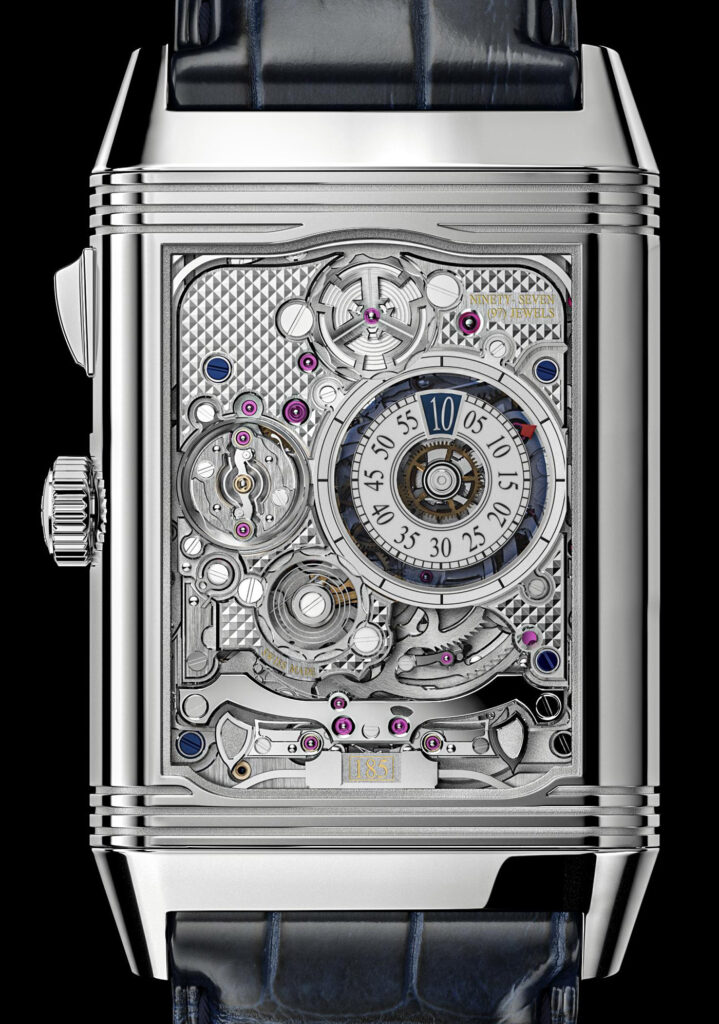 These are the parts of the watch that are constantly active. The other two dials are passive until midnight when the watch does something clever. As with the Reverso à Triptyque, the Reverso Calibre 185 Qaudriptyque features a gear train inside the bracket that secures the reversing case in place (the part that straps to your wrist). The watch extends a small pin from the case at midnight, which depresses a pusher within the bracket. This, in turn, advances the displays on the bracket one step forward as required. After that, the displays are inactive again but always on time. 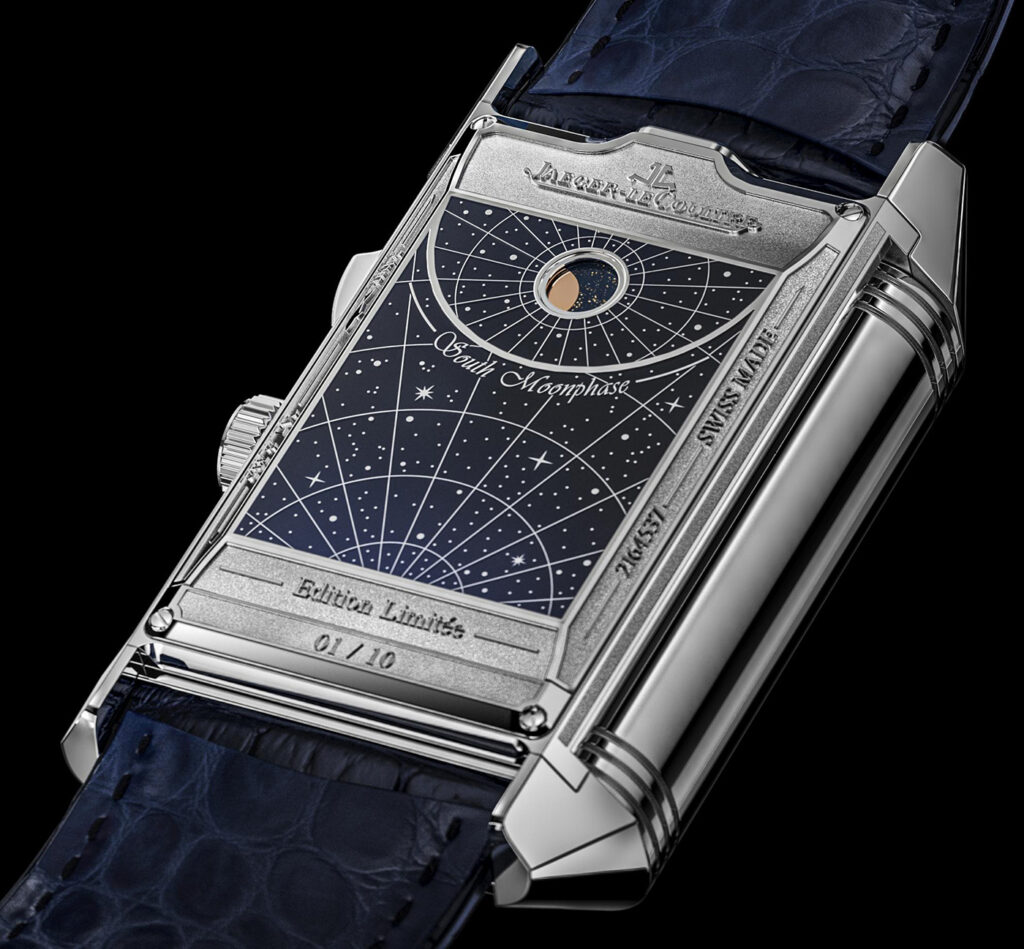 These particular displays are the Synodic cycle, Anomalistic and Draconic cycles of the moon, and a year indicator. The Synodic cycle is what we call the lunar cycle, which is the length of time to go from one new moon to the next (the Oris Dat Watt piece we looked at recently displays this too). The large laser-cut moonphase displays this on the ‘third dial’. An opaque lacquered disk moves across the moon to display the moon phase.

To the bottom left is a display of the Draconic cycle. This cycle is based on the moon’s orbit being connected to the sun’s track through the sky. The moon’s orbit around the earth is not parallel to that of the sun’s; otherwise, we would see a lot more eclipses (when the moon perfectly blocks out sunlight from reaching the earth). The moon’s orbit is off-kilter by just over 5 degrees. Therefore, the moon does not block out the sun’s light entirely (and cause an eclipse) very often. The points that the moon does perfectly block the sun’s light are called nodes. These nodes move within the moon’s orbit, taking 18.6 years to go back to the same place. Because the nodes move in the opposite direction to the moon as it orbits the earth, a Draconic month is quicker than the synodic cycle, taking 27.2 days to return to the node it started from. 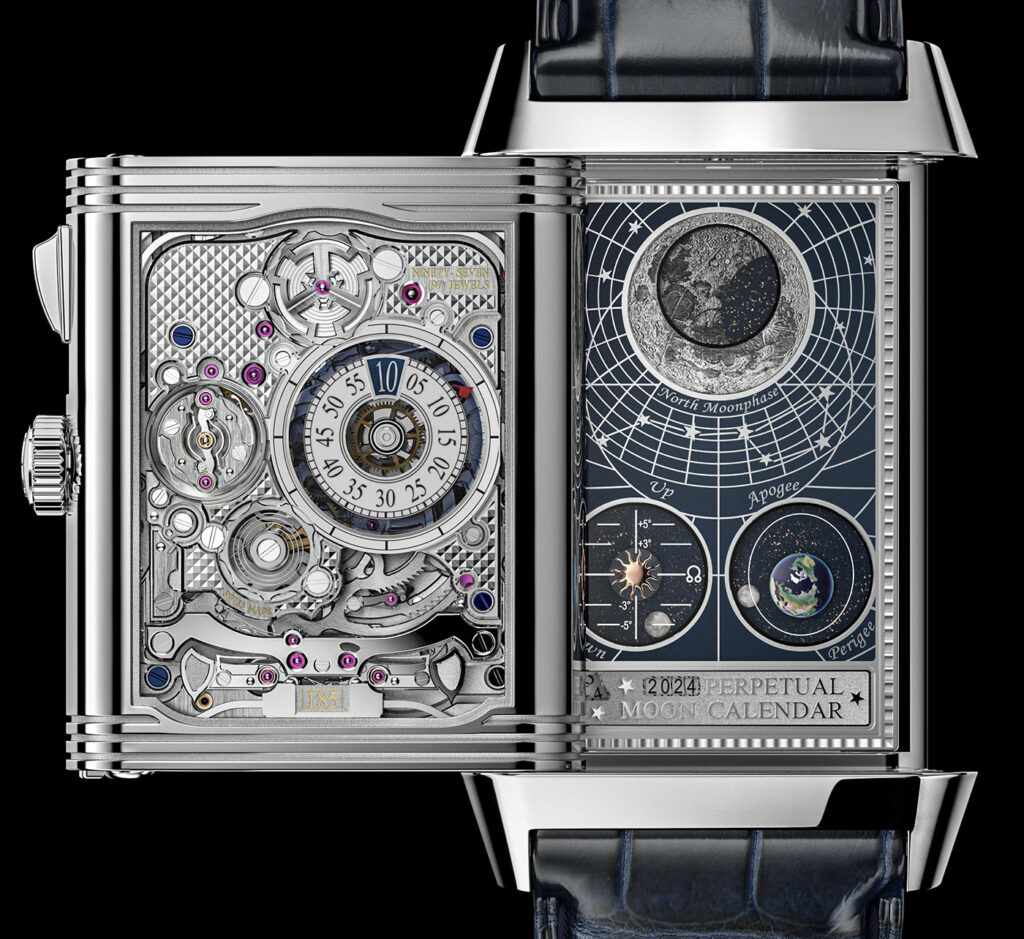 At the bottom right is the Anomalistic cycle. This is the length of time it takes for the moon to return to a thing called an Apsis. The moon’s orbit around the earth is elliptical, and the moon will at some points be closer to the earth than others (the difference between the moon at its closest and the moon at its furthest is 26,200 miles). Just like how the nodes in the moon’s orbit move, the apsides (called apogee and perigee) also move in their own orbit. It takes an apsis 8.85 years to return to the same place in the orbit. Unlike the nodes in their orbit, the apsides’ orbit is in the same direction as the moon’s, so the Anomalistic month is slightly longer than the Draconic month at 27.5 days, on the very back of the watch (the ‘fourth dial’) is the moonphase as seen from the southern hemisphere. 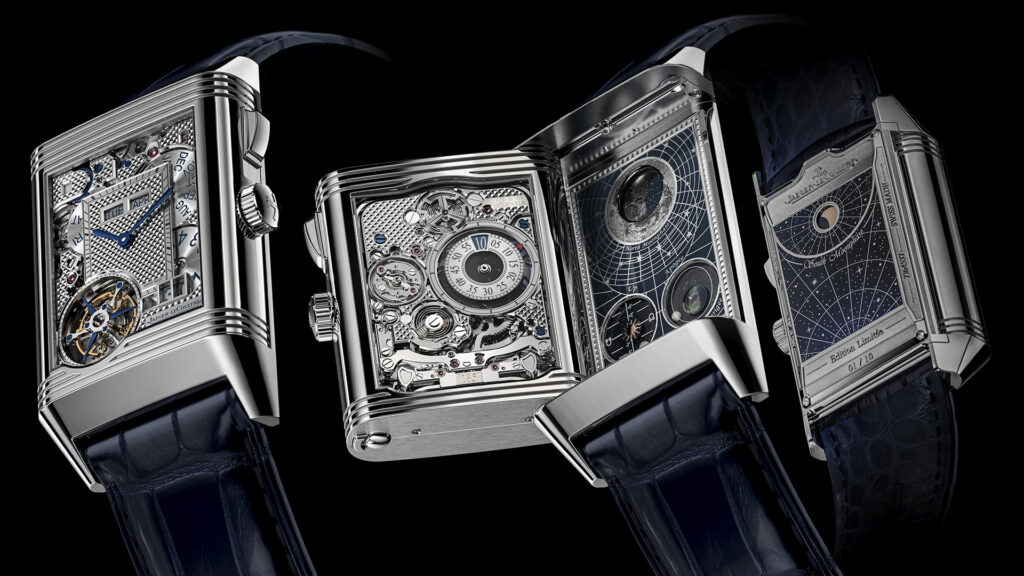 To get all this working and working accurately takes an enormous amount of time and a biblical amount of calculations. No wonder then that the price is €1.35m and they’re only making ten of them. Despite all these gizmos, it still has a 4Hz beat rate and a 50-hour power reserve. It’s pretty well-sized, too, measuring at 51.2mm x 31mm x 15.15mm, which is smaller in every way than the gargantuan Reverso à Triptyque.