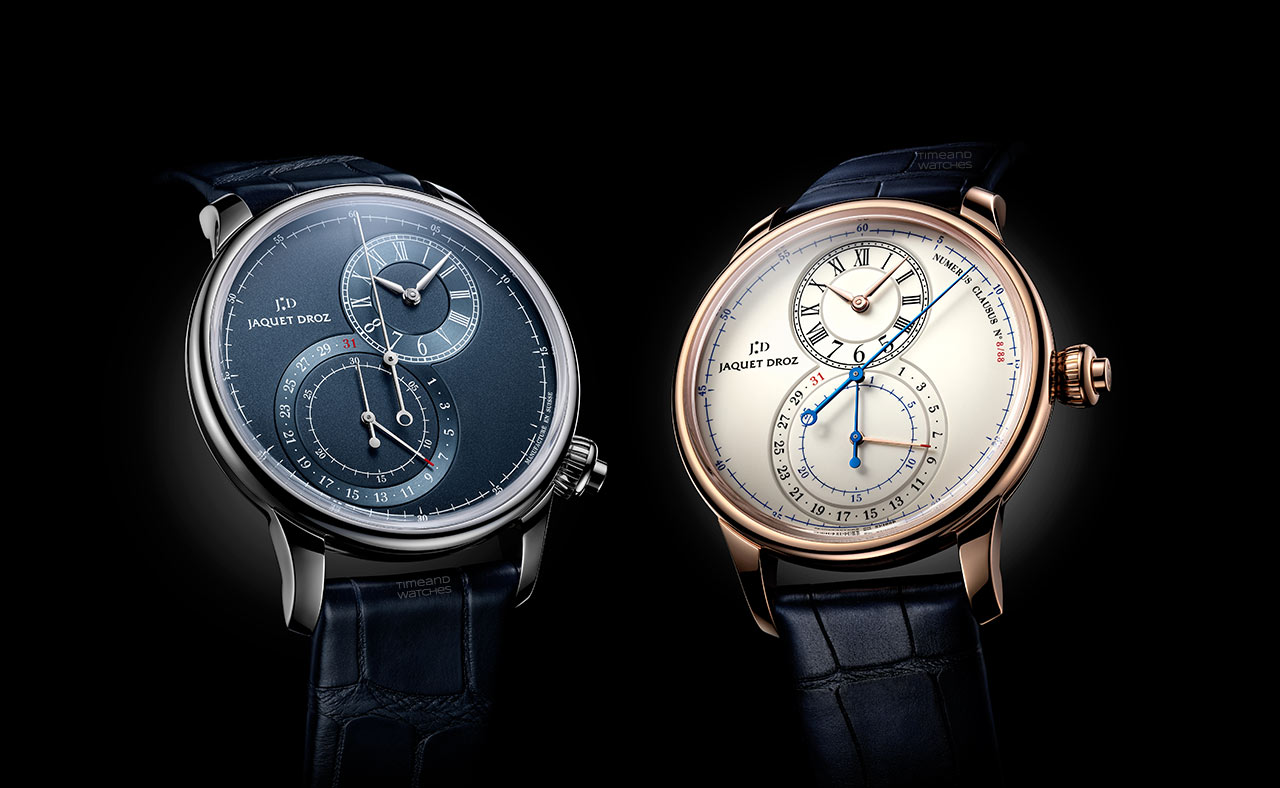 Pierre Jaquet Droz was highly regarded during his lifetime for the automata he designed and built. These machines could act out a sequence of simple or compound movements by themselves and were powered by none other than clockwork. While Jaquet Droz himself has long since passed, you can still see his influence in the watches made by the company today. The Charming Bird watches feature an animated bird which is powered by pneumatics to create a lovely tune, all of this inside a wristwatch. But, not everyone can afford such a technical marvel, but for those who want to stick to more traditional watches yet want a piece of the Jaquet Droz history, the Grande Seconde line of watches is poised to take on the role. 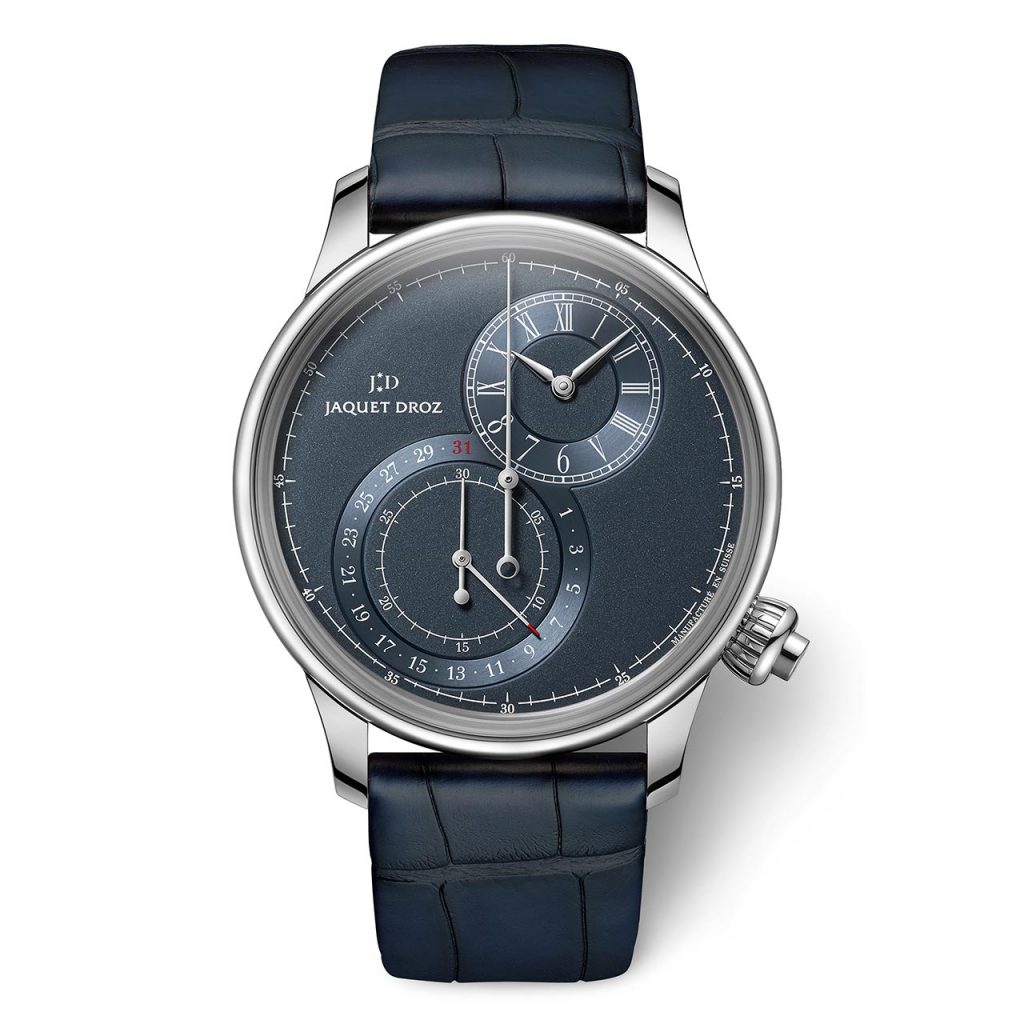 The new watch is a chronograph dress piece, a rotor automatically wounds it, so it’s not set to compete with the hand wound super high-end dress chronographs such as Datograph from A. Lange & Söhne, but it’s impressive nevertheless. The dial layout features the chronograph seconds placed in the centre and marked with an extraordinarily long and thin hand, the chronograph minutes are on the lower subdial and are overlaid by the date. On both versions of the new watch this date is a retrograde date, meaning that rather than completing a full rotation, the hand moves back the way it came to return to the ‘one’ position when the days move over from one month to the next. 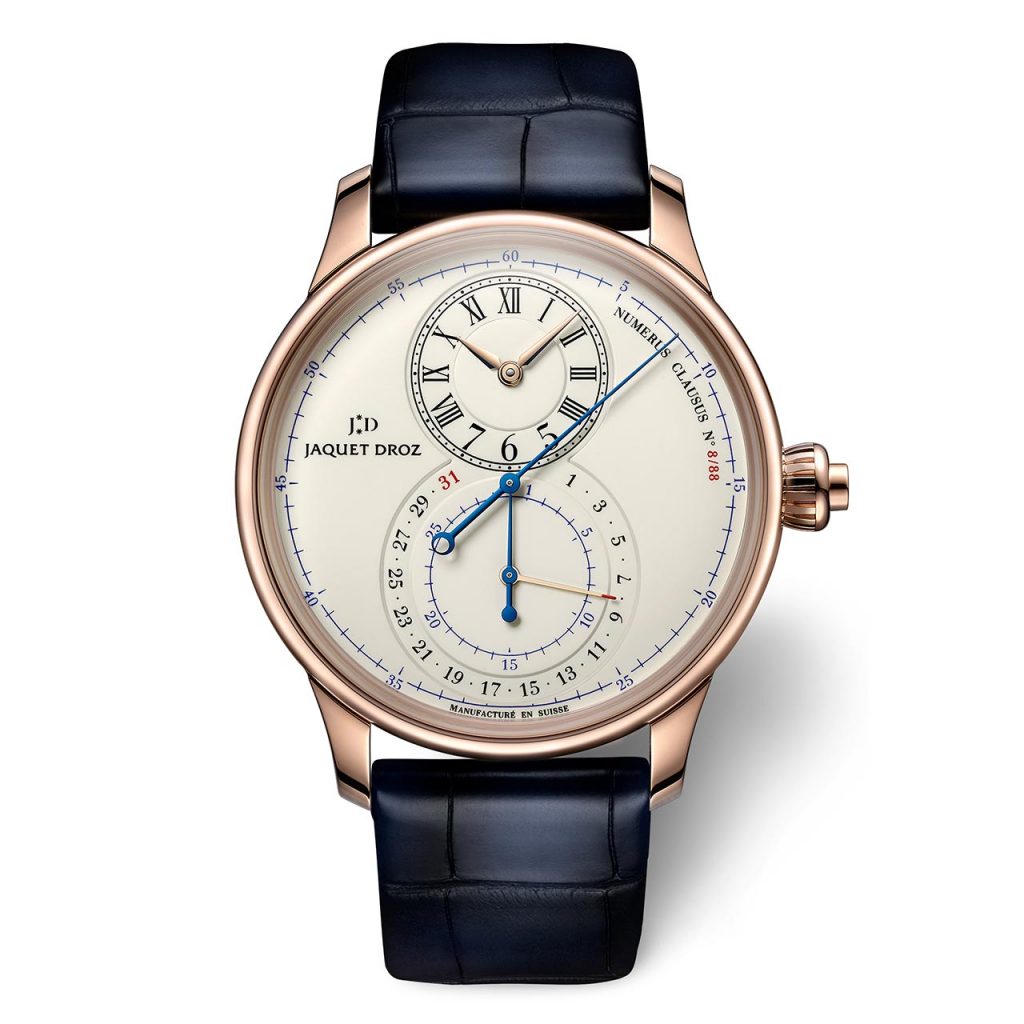 The time is measured via two smaller hands sat above the lower subdial. You might have noticed that there’s a difference between the two watches. The blue dial watch features a steel case and an offset dial with the crown at 4 O’clock. This version is not a limited production watch and costs €18,500 + tax; there are a grey dial variant and a silver dial version of this watch as well. The other watch includes an 18K red gold case, and that costs a whopping €29,500 + tax. For this watch, the movement has been rotated inside the case to vertically stack the dials and put the crown back at 3 O’clock. 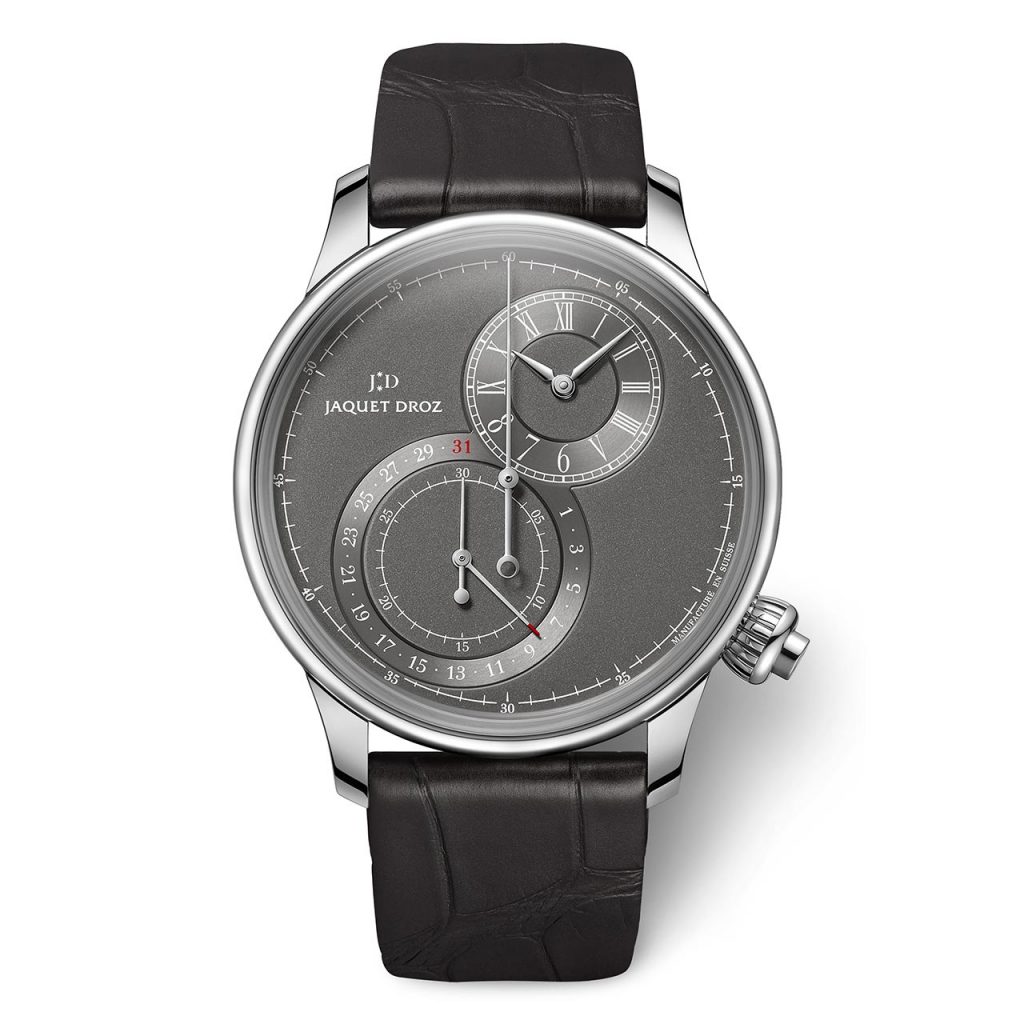 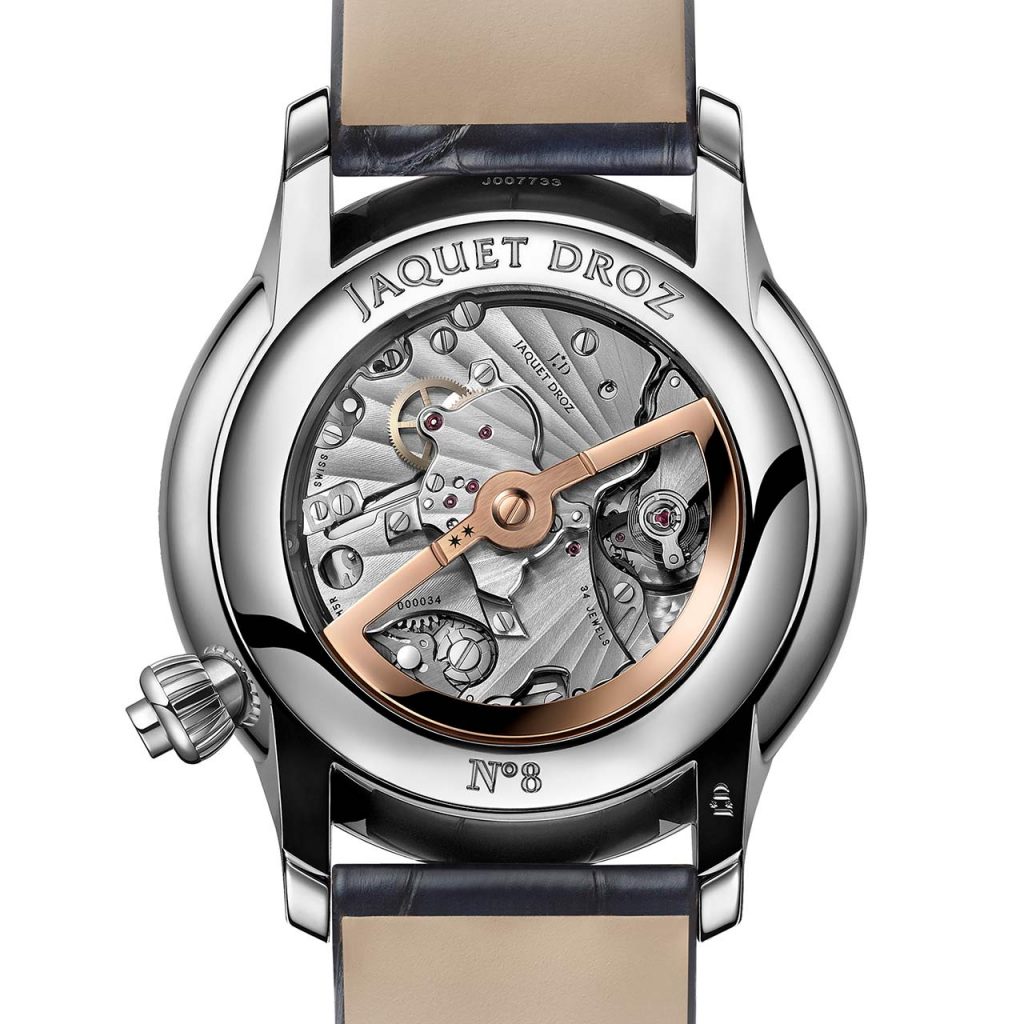 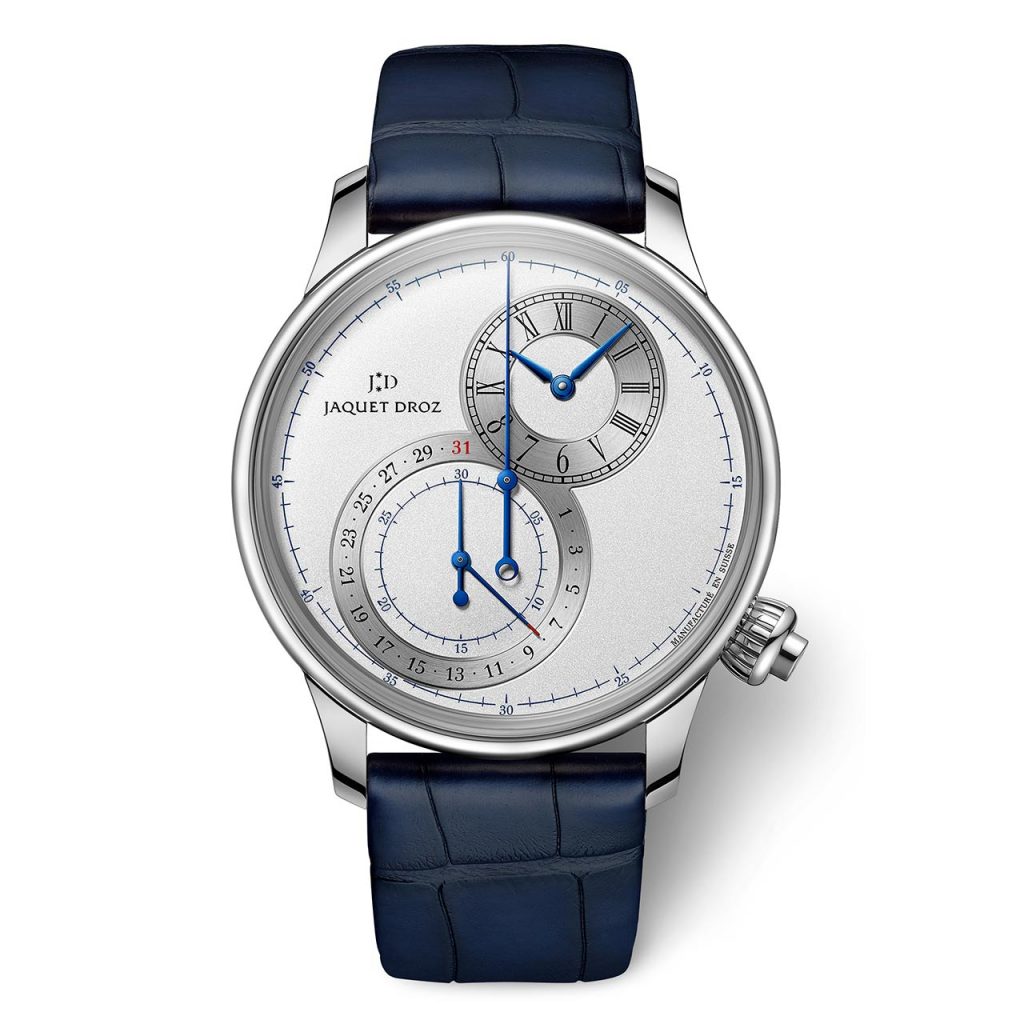 The movement inside these watches is the calibre 25M5R, with a 3Hz operating speed and a 40-hour power reserve this monopusher chronograph looks resplendent through the caseback. Thanks to the skeletonised gold rotors found on all the watches, you can admire the view of movement uninterrupted by any winding rotor. It also features a silicon balance spring, too. The movement has been designed for this watch and will be used exclusively in it, although there isn’t a mention I suspect this to be made by Manufacture Blancpain given the style of finishing. It’s exquisite in this case and helps provide the watch with an alternative appeal compared to the more traditional watch brands. The limited version in gold will have only 88 examples made.