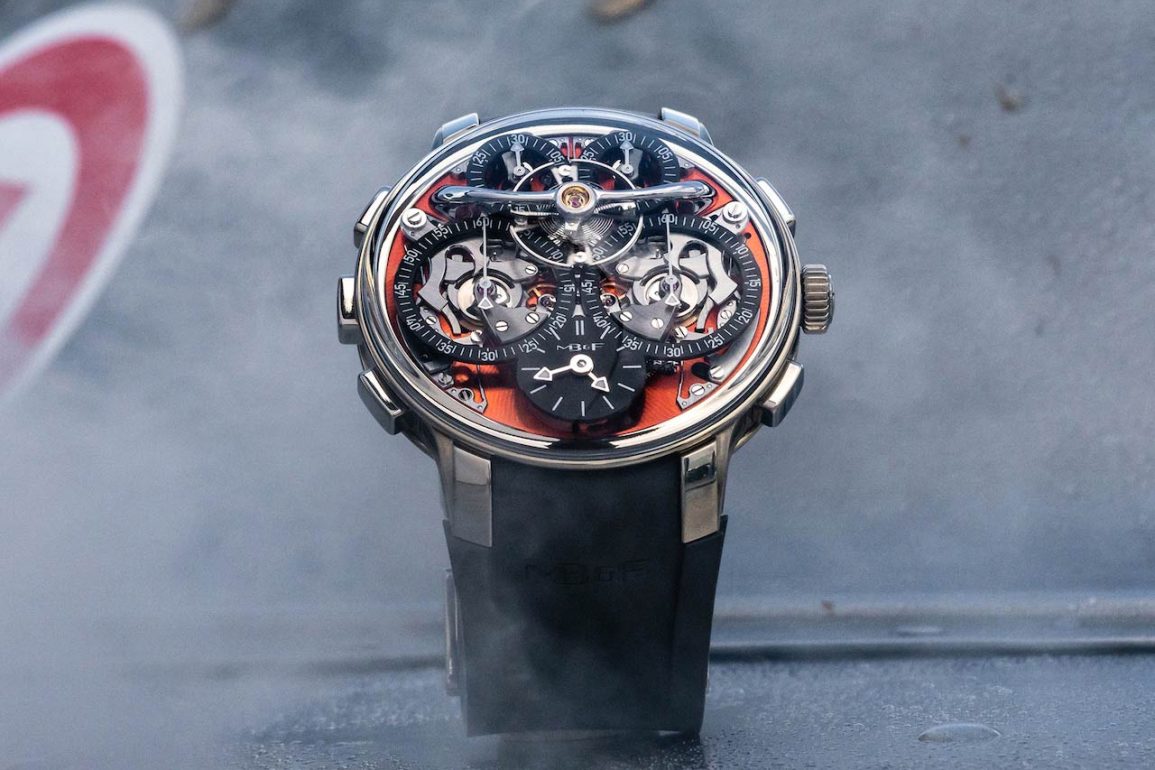 MB&F is a brand that is well known for producing products that are both technically and visually impressive, and their latest launch is no different. Featuring not one but two separate chronographs with multiple timing modes powered by a single movement, the new Legacy Machine Sequential EVO is the brand’s first-ever chronograph watch that elevates the Legacy Machine concept to a whole new level. 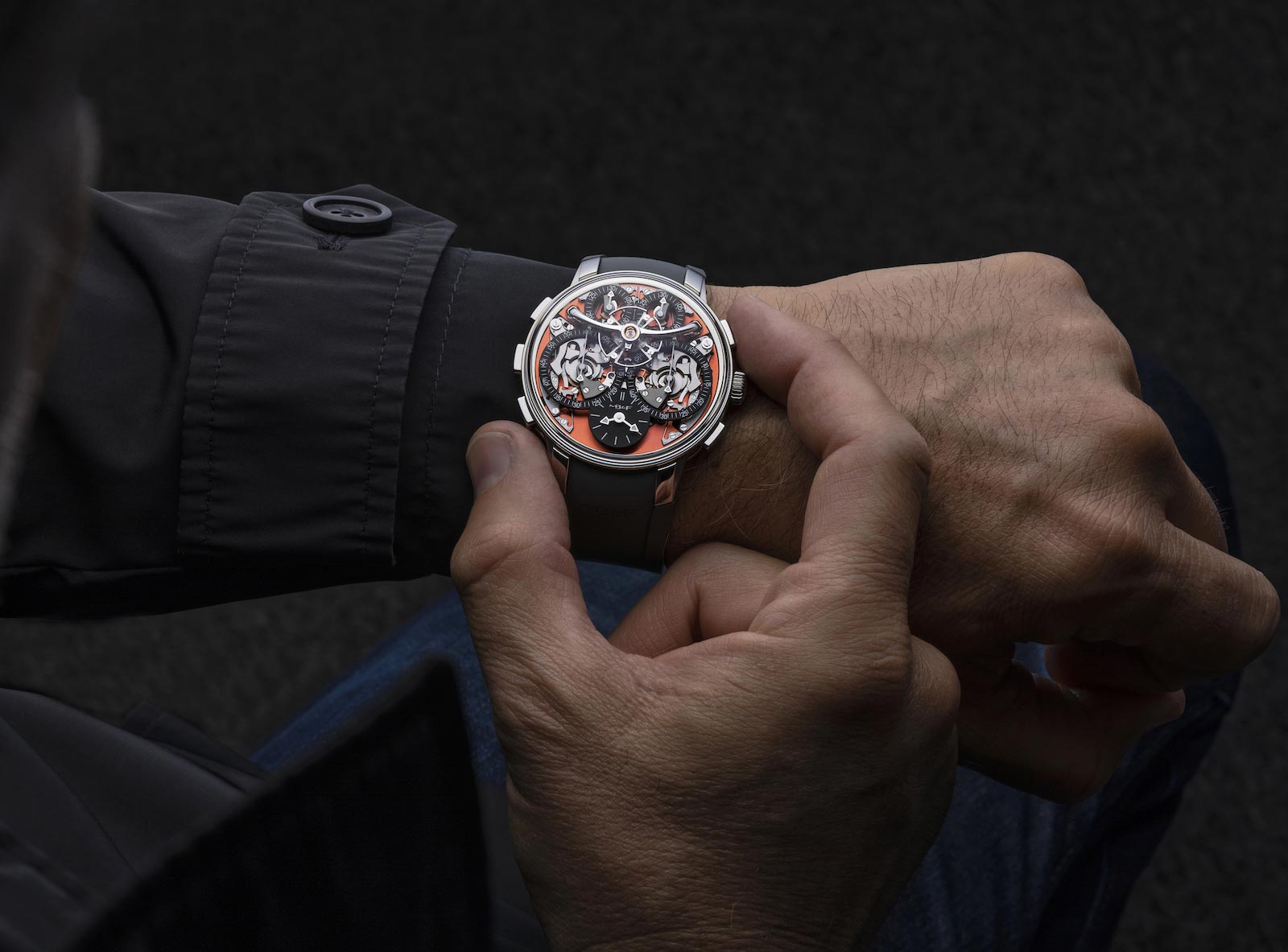 Striking and complex are the two words that immediately come to mind when looking at the new Legacy Machine EVO. Offered with an anthracite or sporty orange base, the LM Sequential EVO is designed to give the wearer a clear and expansive view of its jaw-dropping complicated mechanics. Speaking of mechanics, the watch is powered by a hand-wound movement that comprises a whopping 585 components that include the signature Legacy Machine flying balance wheel with regulating screws and Breguet overcoil (visible at 12 O’clock), Geneva waves on the back of the movement, hand-done engravings, darkened bridges with NAC finish and much more. The movement offers an autonomy of around 72 hours, and as I said above, it incorporates a dual column-wheel-based chronograph mechanism that makes it special and stand out from the crowd. 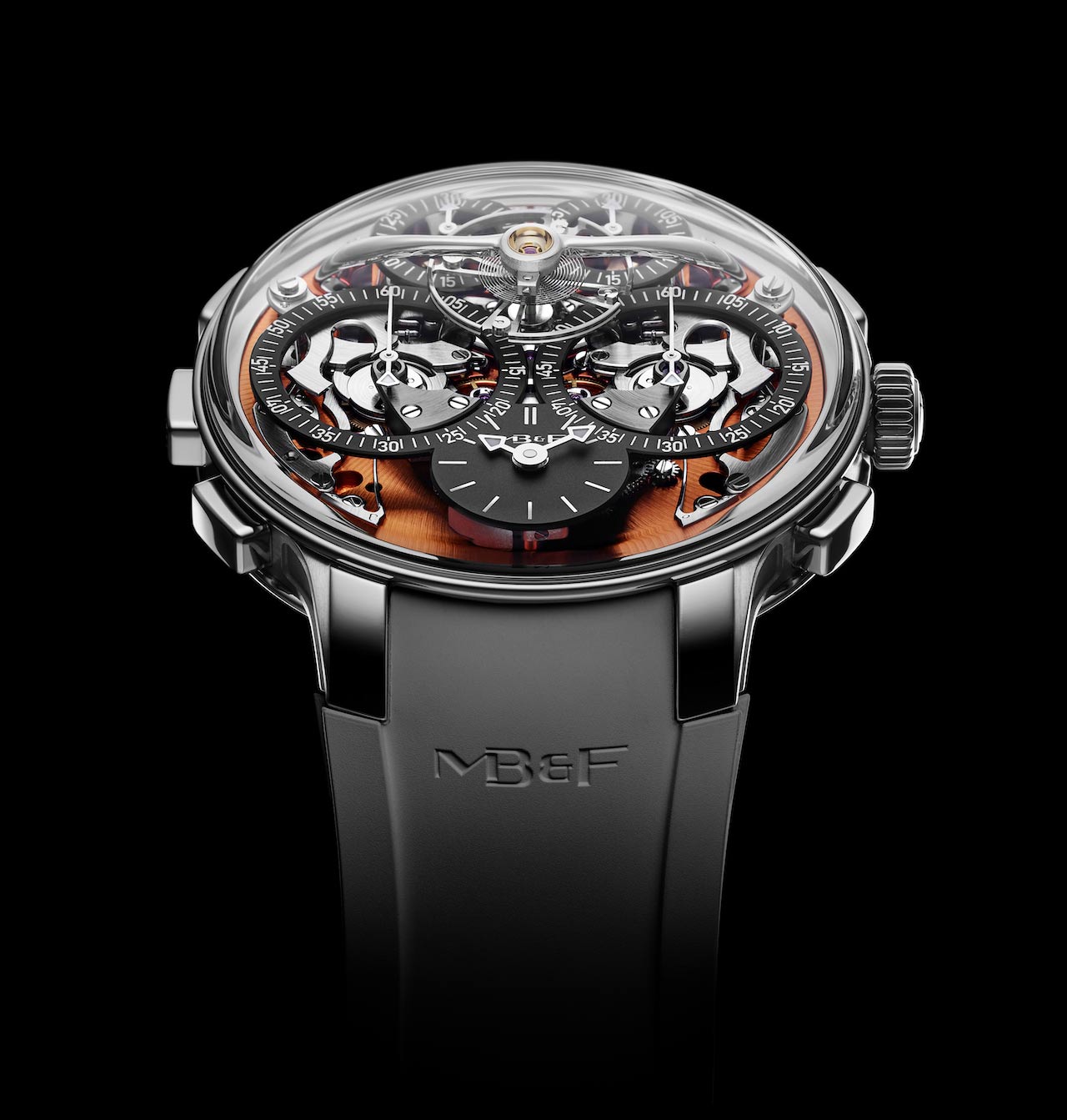 There are two 30-minute chronograph counters on the top, followed by two big chronograph seconds displays in the middle. All sub-registers feature high contrast white printing on a black base to improve legibility. The chronograph minute registers use arrow-tipped hands, whereas the chronograph seconds are recorded using a simple baton with a rounded triangular counterbalance. Finally, at 6 is another circular disc, that displays the hours and minutes. 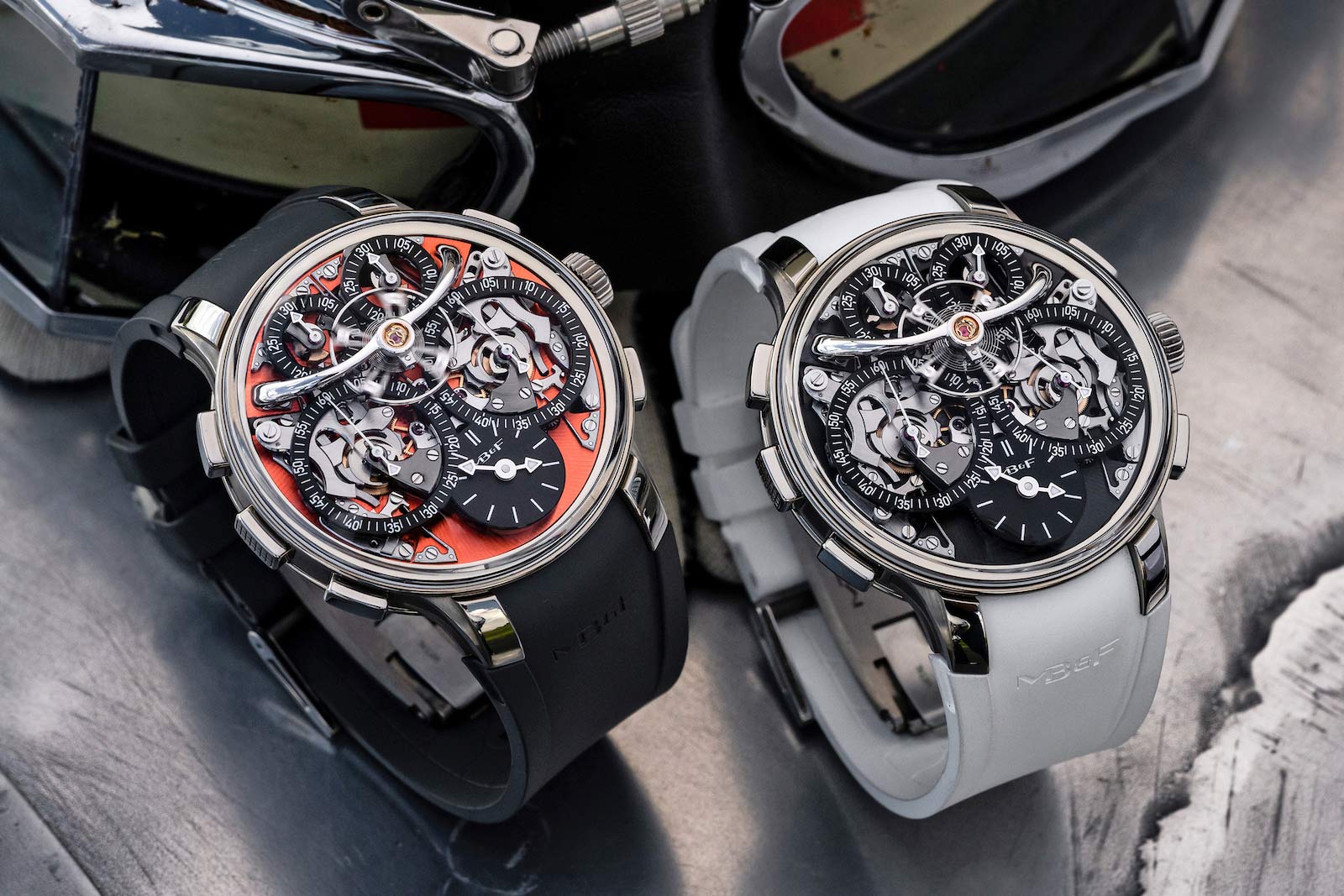 All the technical wizardry on the LM Sequential EVO is packed inside a case made of Zirconium that measures 44mm in diameter and has a height of 18.2mm to the top of the dramatically domed sapphire crystal that protects the dial. The case is flanked by multiple pushers on each side to control the chronograph functions. The pushers at 10 and 8 start and stop the chronograph layout on the left, whereas the chronograph layout on the right is controlled using the pushers at 2 and 4. The crown at 3 is used to set the time and wind the movement. 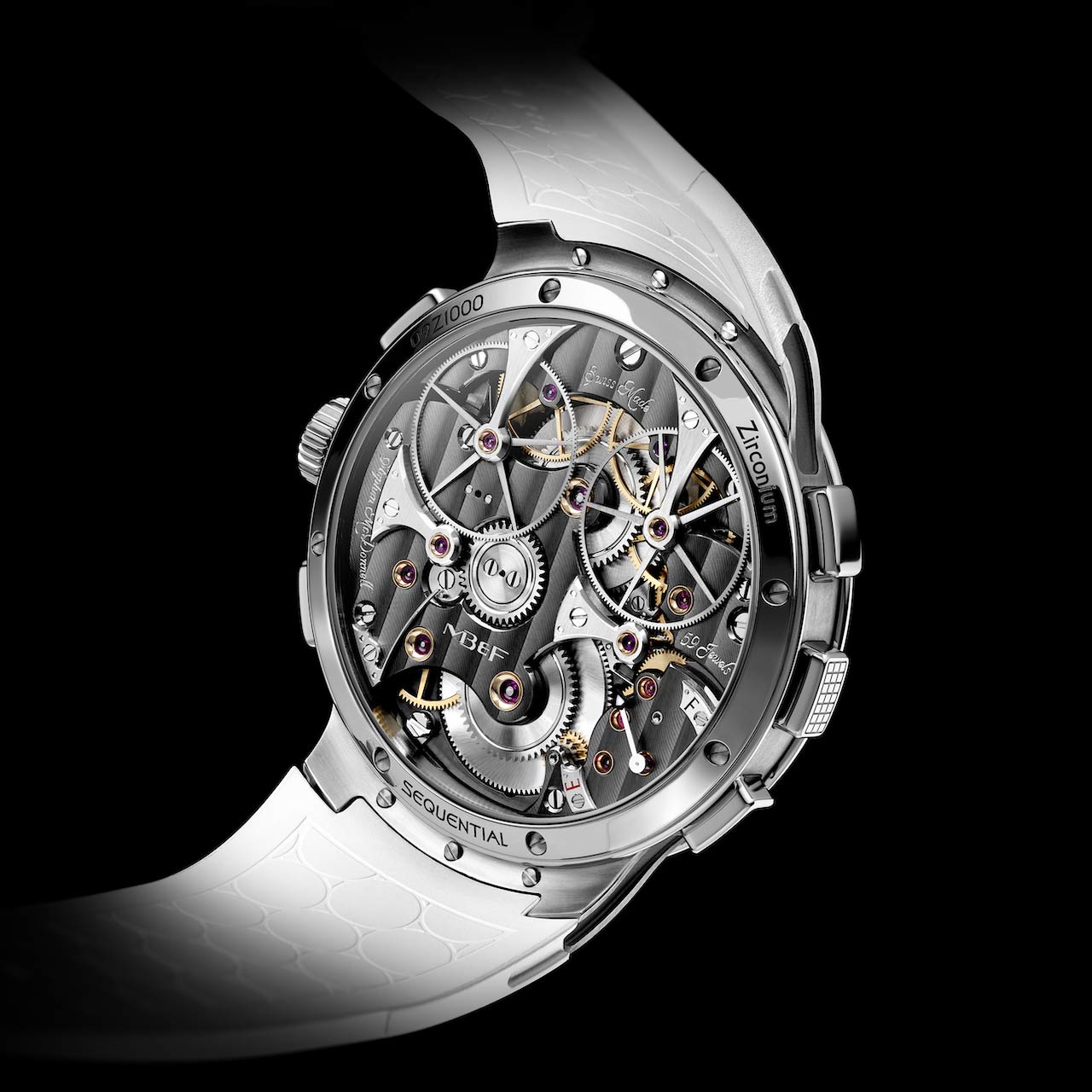 But the fun does not end there as this isn’t your conventional everyday chronograph watch. Look closely, and you will see a pusher at 9. It is this pusher that unravels the true capabilities of this watch. The ‘Twinverter’ as it is being called, inverts the current status of each chronograph. E.g if both chronographs are at zero position, pressing the pusher at 9 would make them start together. Similarly, if both are currently running, the ‘Twinverter’ will make both chronographs stop. Furthermore, if one chronograph is running and the other is stopped, it will bring the first one to a stop and start the second one. This clever function helps the watch achieve multiple timing modes: independent timing, split seconds, sequential, and a cumulative “chess match” mode that has never been seen before in any watch. 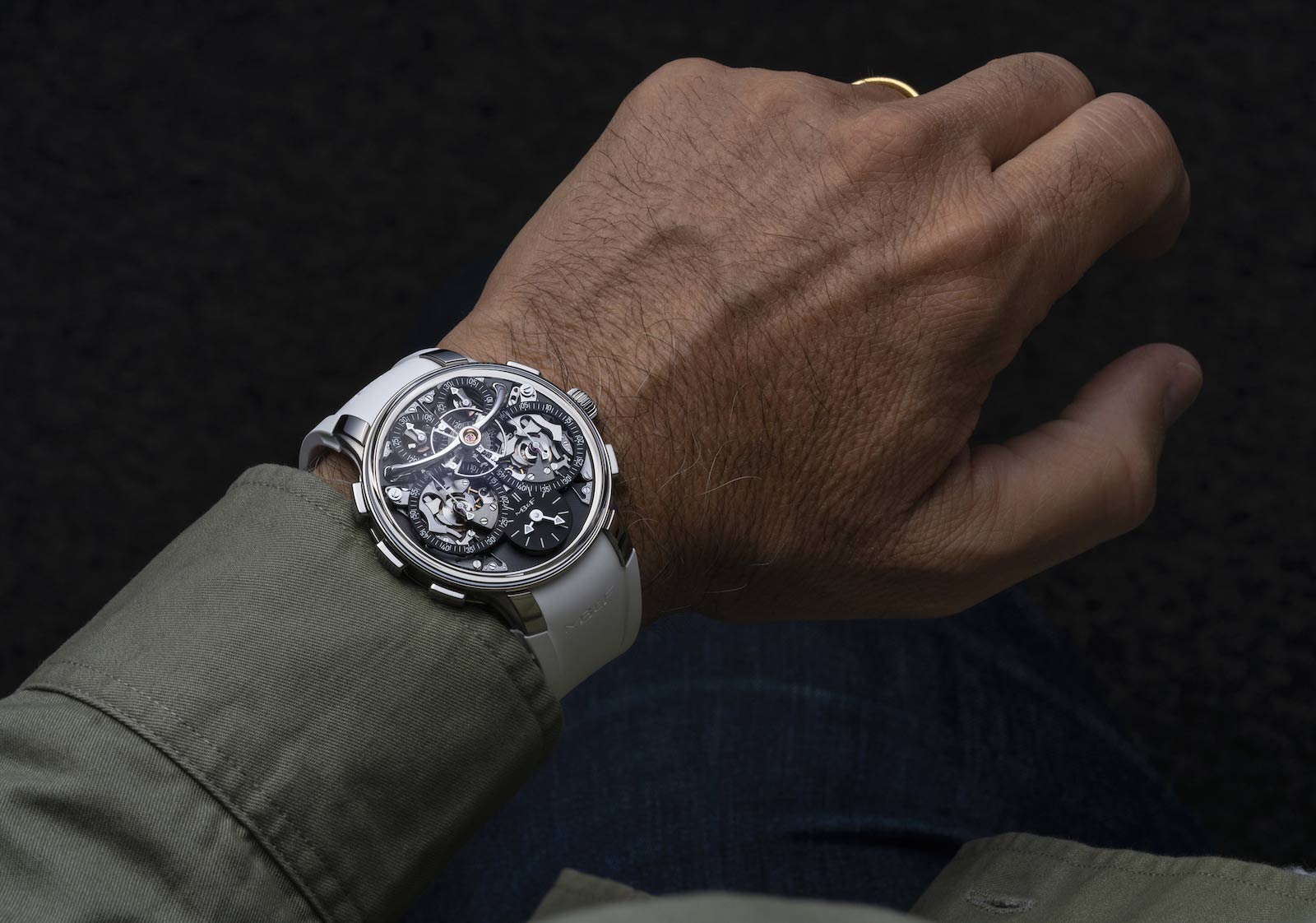 The new MB&F Legacy Machine Sequential EVO comes attached to a high-quality integrated rubber strap with a titanium buckle and retails for CHF 160,000.