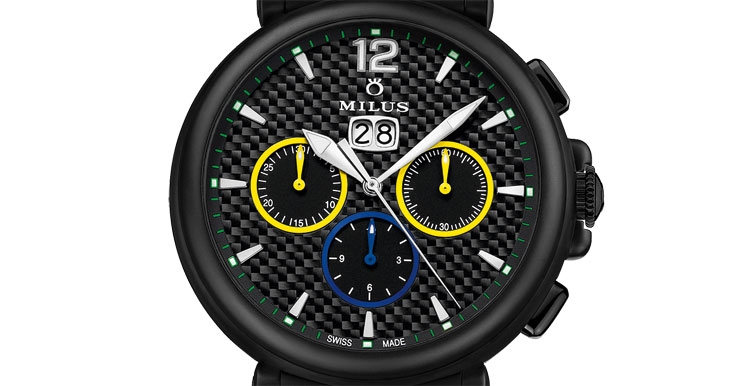 The colours of Brazil

Green, yellow, blue … Milus is paying tribute to the famous footballer Roberto Carlos by launching an exclusive version of its Zetios Chronograph that subtly integrates the colours of the Brazilian flag. The series is limited to three pieces world-wide and one of them is reserved for the star of the leather ball. 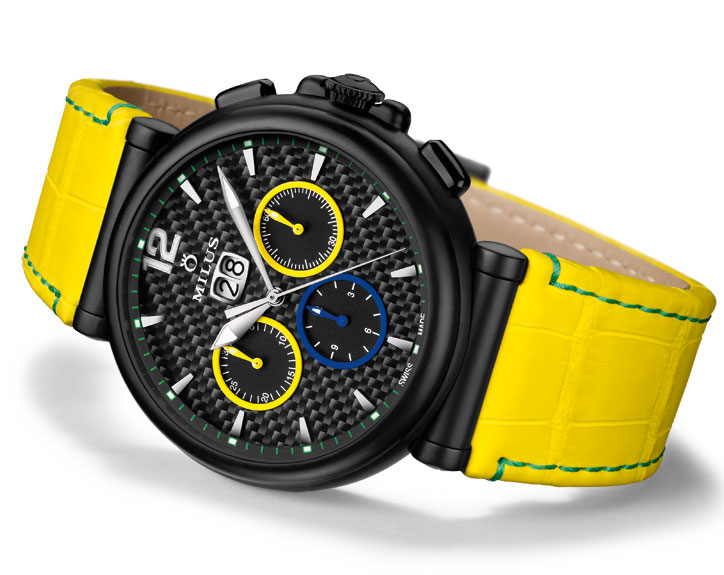 Roberto Carlos da Silva was born in Garça (Brazil) in 1973. He achieved legendary status thanks to his incredible kicking power and his lightning attacks. He made a name for himself by numerous exploits in international clubs (Inter Milan, Real Madrid, Fenerbahçe, Anzhi Makhatchkala), not to speak of his 125 caps for the Brazilian national team. He retired in August 2012, but remains an authentic sports legend for all football fans and is considered one of the greatest left backs in the history of the sport.

To honour this friend of the brand, Milus has chosen its most sportive model, the Zetios Chronograph in a version with very stylish finishings. The most noticeable feature: a stainless steel case coated in black DLC and a dial in genuine carbon fibre enhanced by daubs of colour from the Brazilian flag. The counters at 9 and 3 o‘clock (30 minutes and small seconds, respectively) are circled in yellow with matching hands. The 12-hour totaliser at 6 o‘clock is circled in blue, while the minutes around the dial are punctuated with green. The black hour/minute hands, the grey-anthracite applique indexes and the large and luminescent numeral 12 heighten the spirited feel that is inspired by the idea of competition. 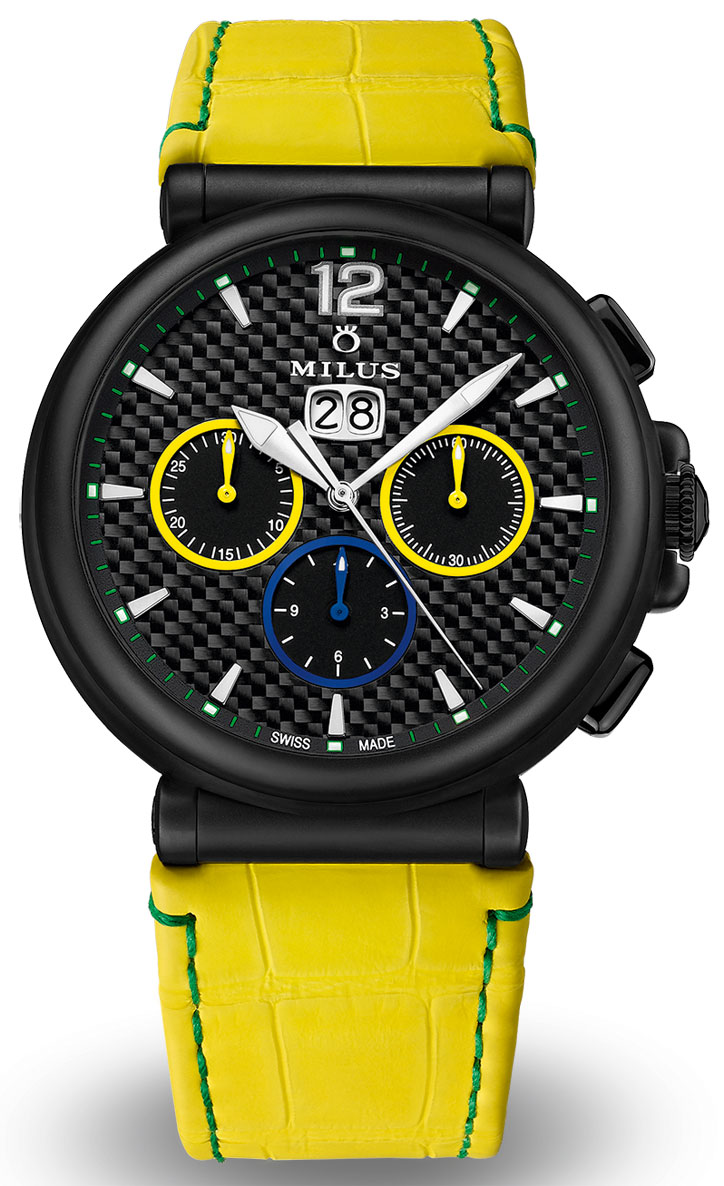 The Zetios Chronograph ZCRC3 Limited Edition comes in three models, three being the number on Roberto Carlos‘s shirt and his lucky number as well. The 1/3 piece has a black alligator strap with rubber-style finishing and black stitching. The 2/3 piece comes with a green alligator strap and yellow stitching. And finally, the 3/3 watch, which will adorn Carlos’s own wrist, has a yellow alligator strap and green stitching. 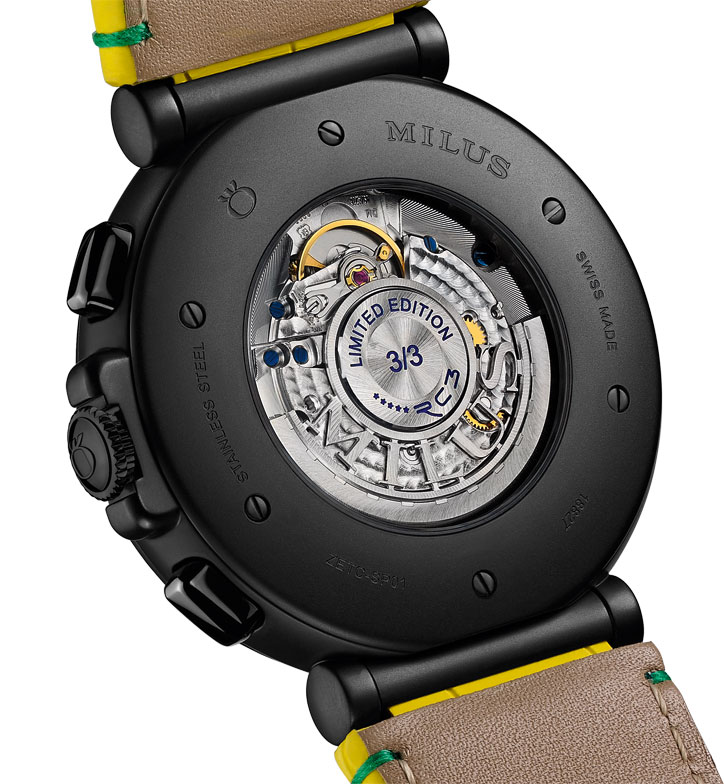 A transparent case back opens onto the high-performance automatic chronograph movement with an oscillating mass shaped like the Milus logo and the RC3 logo of Robert Carlos. It also features five little stars that recall the five world titles of the Seleção Brasileira, the Brazilian national team.

Zetios Chronograph ZCRC3 Limited Edition: the stuff of a champion. 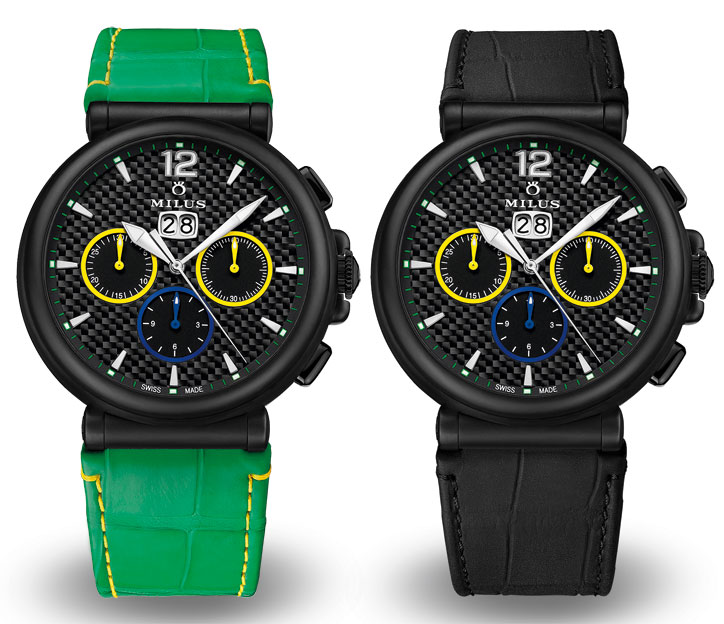