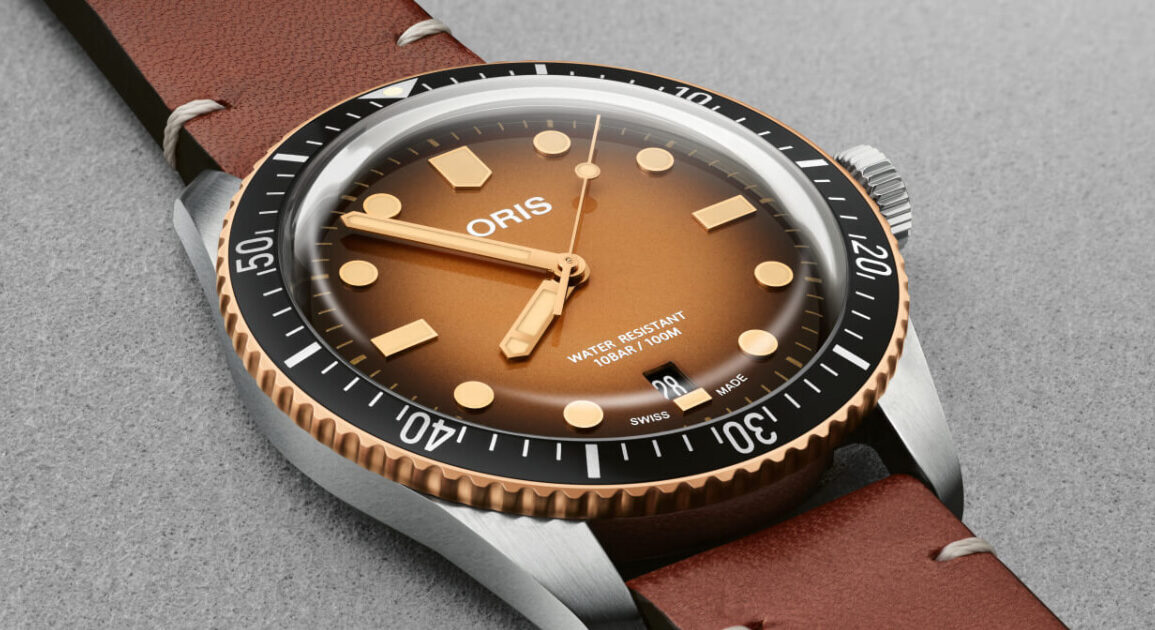 We get it, we cover Oris watches a lot. That’s because, hello, we’re a news agency for wristwatches and horology in general. Like most companies, Oris doesn’t refresh all of its model lines in one go, that would mean there would be gaps of over a year between product launches which gives people time to forget about you and those new technologies you’ve worked on to become obsolete (not having a product to debut every year is one of the key reasons that you don’t see Blackberry phones any more). As such, we’re pleased to show you the latest addition to the Diver’s Sixty Five collection, a range we haven’t covered since May of last year unless you count the Hölstein edition which shares the same design cues but wasn’t marketed as a Diver’s Sixty Five model. 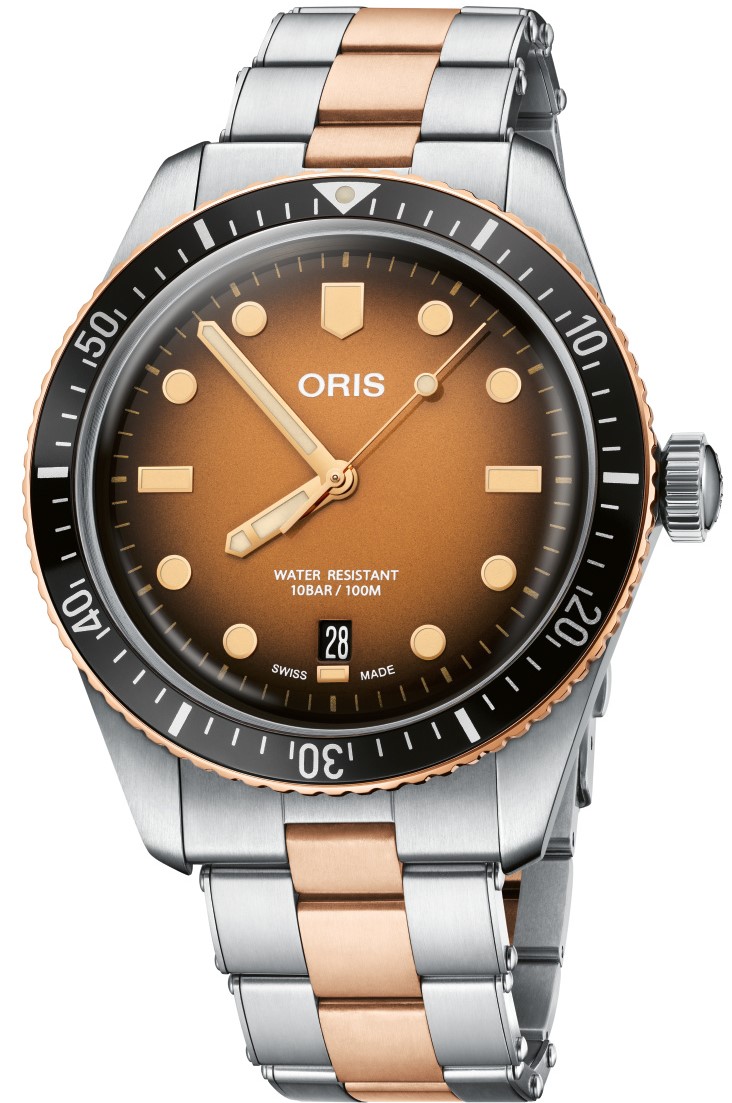 Supposedly inspired by sunsets in the Mediterranean, this new Diver’s Sixty Five model features a classy gradient dial with markers and hands matching the two-tone steel and bronze case. The markers and hands are covered in SuperLumiNova coloured “Light Old Radium” to give the watch some patina-inspired colours without going too heavy on it. The dial is kept simple and symmetrical with a date window at 6 O’clock and markers that don’t seem to take up much space. There’s also a general lack of writing on the dial, just the essentials, which makes it seem open and refreshing. 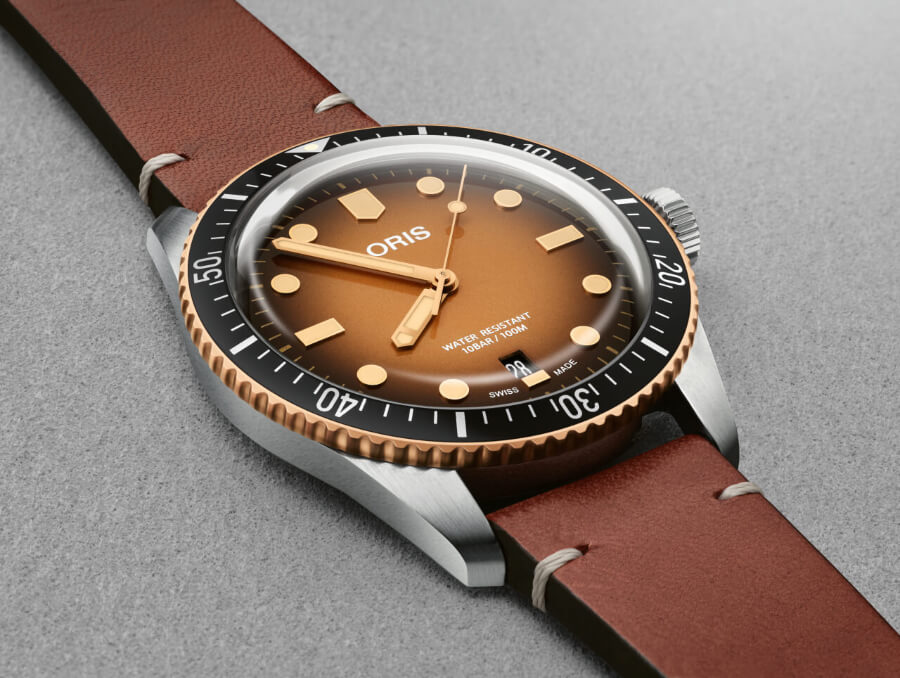 Behind the dial and keeping the time is an automatically-wound calibre Oris 733 which is based on a Sellita SW200-1. It has a modest-at-best power reserve of 38 hours, a 4Hz beat rate and a jewel count of 26. That means if you need to leave this one off the wrist for a weekend away, you’ll find it has stopped, and you need to set the date correctly again, it’s not a big deal, but it would be nice to have more convenience in this regard. 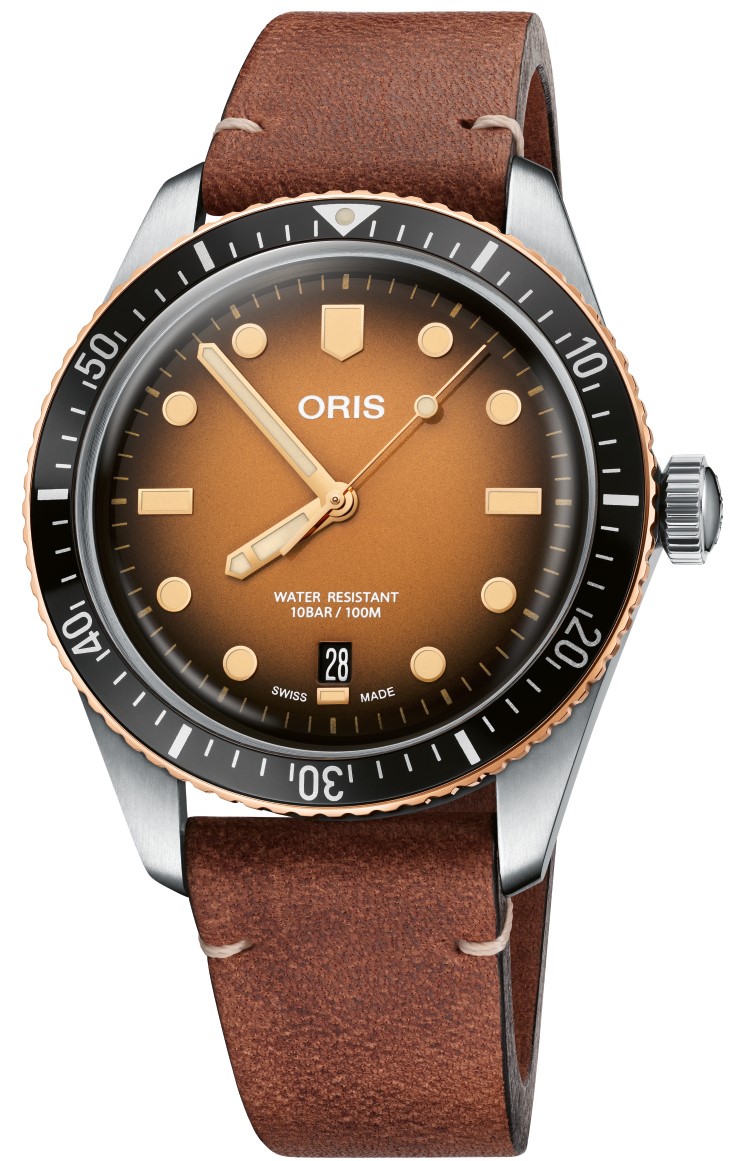 Enshrouding that movement is a 40mm multi-part case made of stainless steel with bronze components providing a contrast instead of the usual gold. This is likely to aid in keeping costs low, as using solid gold links like any reputable manufacturer should would bump up the price to levels that I think most Oris buyers will question, even the dedicated collectors. You still get a great looking watch that comes with a two-tone multi-link bracelet or a leather strap if that’s your thing, and the gap between the lugs is 20mm which is easy to get straps for. The case is also water-resistant to 100m, meaning it’s ready to swim when you are.

The price for one of these on a leather strap is CHF2000, opting for the bracelet will add a further CHF200 onto that total.