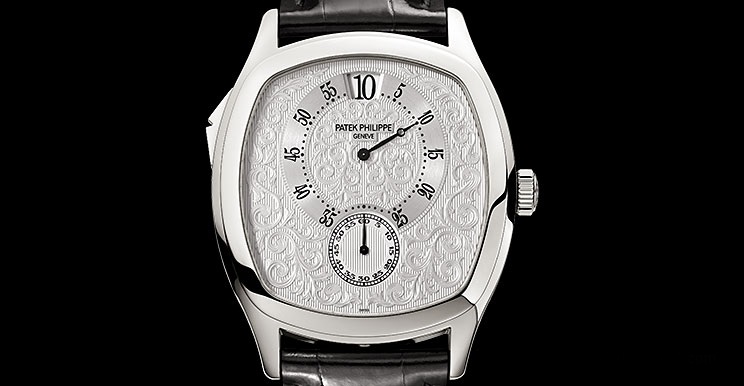 Another timepiece commemorating Patek Philippe’s 175th anniversary is the Chiming Jump Hour bringing with it four patent pending technologies. Seriously, that’s a lot for complicated watches. This particular model banks on elegance with the touch of music.

The side of the platinum case sports an array of engraved flanks to highlight the certain elegance of the watch. I don’t know if it’s just me but this looks more like an antique case rather than a classic case, there’s a difference because being classic enables going backward and forward in time but antique is simply archaic. Nonetheless, I don’t blame Patek’s choice of design as it does stick to its classical heritage. I would have preferred it to be cleaner since there’s that weird looking on-off lever at the 10 o’clock. Hard core watch collectors and connoisseurs would have lots of debating on this one though. To be fair, it does compliment the design of the crown though.

The silvery opaline dial made of 18k solid gold sports a unique embossed flower decor with a circular-grained minute scale, which is also printed in black Arabic numerals. The jumping hour is immediately noticeable and the hands are carefully designed to not be too lavish so as to be harmonious. I consider this a design feat because normally, fully ornamented dials are hard to look at. Unlike the side of the case, the bezel and the lugs are cleanly designed with a polished look thus highlighting the elegance of the watch.

The real excitement begins in the watch’s incredible engineering, which is sadly hidden by a solid caseback. I might have appreciated a visible caseback especially with the watch’s extremely complex movements. Nonetheless, the company disclosed that the watch took four years to develop. It has 438 moving parts making the seconds jump, the hour jump, and the splendid chiming by the hour. There is incredible energy transference inside the 32.6 mm in diameter and 6.5 mm in height case making up for the four patent pending technologies. Did I mention the weird looking lever at 10 o’clock? Its purpose is to isolate the hammer thus disabling the automatic hourly chime, which is pretty good for those stuck in a lengthy conference. However, the most prominent of this new technology is the seconds hand made of Silinvar material, which plays an important role in delivering precise distribution of energy. To me, it sounds like the romantic movements of precise pieces, or simply put, the poetry of complicated engineering techniques.

All of the mentioned movements are made possible by the mechanical manually wound movement Caliber 32-650 HGS PS sporting a staggering 28,800 semi-oscillations/hour, that’s 4 Hz which is certainly needed for the energy intensive mechanical features of the watch. Incredibly enough, the power reserve still maxes out at 53 hours with a minimum of 48 hours, which is certainly an engineering feat. The Patek Philippe Seal prevents unskilled hands from ever touching the complex parts of the Chiming Jump Hour watch. There is no surprise for the hand-stitched alligator strap with a shiny black finish to properly hold the watch in place. It’s not only elegant but it does look very comfortable to wear. It is also secured by a fold-over clasp engraved with “PATEK PHILIPPE 1839 – 2014” and an engraved Calatrava Cross in the center.

Finally, if you’re ever thinking of getting one for yourself, you might want to hurry because there are only 175 pieces of this limited-edition watch. For more info, please visit patek.com