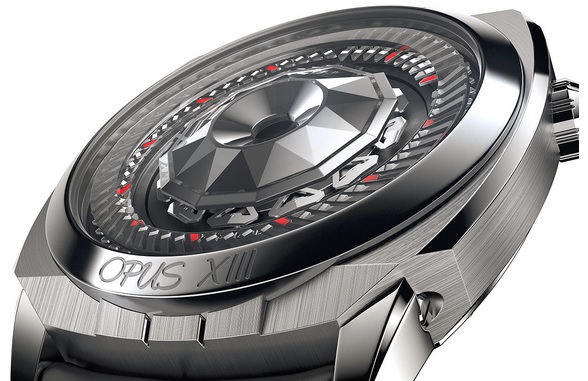 I believe this could be the most complex watch ever built into a conventional shape wrist watch. With 242 jewels in place and even more parts, this watch has 59 pivoting minute hands, 11 rotating triangles for the hours, and a sliding trapdoor where minutes and hours appear or vanish to tell the time. Launched by Harry Winston for BaselWorld2013, not a lot has been said about this piece.

in collaboration with Ludovic Ballouard

If you are a mechanical engineer or someone fascinated with complex machines, this particular example is something that would cause you to salivate big-time. The complexity employed to make the many minute and hour hands as well as the trapdoor is a marvel but conceptually, I don’t believe it deserves a lot of coverage. Let’s face it, it still feels contemporary – not special.

Below is an excerpt of the official press release from Harry Winston:

“….Opus XIII has only one thing in common with any other watch and that is its balance and escapement; the rest of the mechanism is pure invention, the brainchild of independent watchmaker Ludovic Ballouard.

The display is produced by two separate power sources working as a team. One mainspring barrel drives the escapement through the going train and keeps the balance swinging at a steady 21’600 vibration an hour. The other barrel provides the energy for the display of minutes, triggered every 60 seconds by the center wheel of the going train. The key element is an outer minutes ring driven by the second barrel.

Every minute, it jumps forward a step, released then locked by a rocking lever with two pallet stones, controlled by a cam working off the center wheel. A peg on the advancing ring flips each minutes hand forty degrees in turn, revealing them in succession around the dial. At the end of the 59th minute, a second outer ring comes into play, its crenellated rim simultaneously rotating the fifty-nine minutes hands back into their hiding places.

The mechanism for the hours is no less ingenious. Here again it relies on an outer ring that jumps forward every sixty minutes, turning the triangle of the old hour 180° so that it disappears beneath the faceted dome on the dial, and simultaneously turning up the next hour. At the heart of this mechanism is a snail cam that rotates once an hour. A lever drops off the edge of the cam, pulling a rack to turn a pinion that advances the hours ring. At the 12th hour, instead of turning up a triangular hour hand, the hours ring rotates a wheel attached to a connecting rod that pulls open a sliding shutter to reveal the Harry Winston logo in the center of the faceted dome.

Can Chopard’s Alpine Eagle Claim A Spot At The Top Of The Food Chain? (Live Pics)

You may also want to view the official YouTube video:

After reading that (and watching the video), do you still think it should be classified as something special? I don’t know. I have my doubts.