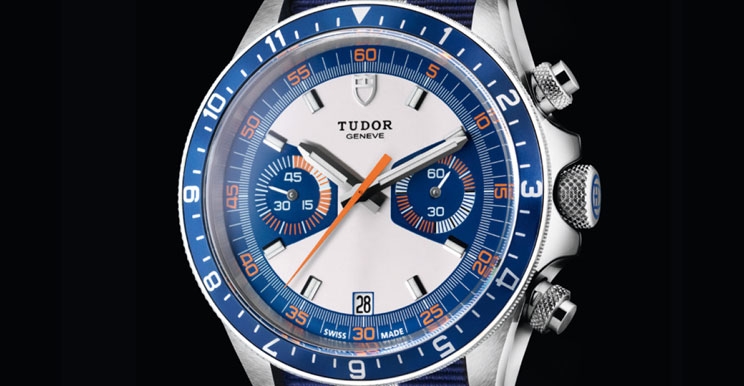 In the rich saga of TUDOR historic chronographs, reference 7169 – better known to aficionados as the TUDOR “Montecarlo” chronograph – is an absolute icon. Since its launch in 1973, it has been produced in a number of different versions, the most fascinating featured distinctive touches of blue, grey and orange. This rare, historic chronograph was produced for only a few years. Today, it is greatly prized by collectors and is steadily increasing in value. To revitalize this legendary chronograph – imbued with the spirit of chic, sophisticated holiday destinations of the 1960s and 1970s, and reminiscent of carefree Mediterranean warmth and glamour – TUDOR has decided to reinterpret it and unveil the new TUDOR Heritage Chrono Blue.

TUDOR’s approach to the design of this watch was exactly the same as for all the watches in the Heritage line since 2010. Far from being merely a new version, it is a unique reinterpretation in which past, present and future converge in both time and style. While all the aesthetic codes that contributed to the recognition of the historic model remain – a synthesis of the original spirit of the timepiece and a faithful reproduction of its key characteristics – TUDOR’s Style Workshop has added many modern touches to update the iconic spirit of this watch and endow it with a timeless strength to make it “tomorrow’s icon”.

At a time when blue is “the new black”, the chromatic harmonies of blue, grey and orange suggest an undisputed modernity. The royal blue of the original model (1973) combines with a slightly lighter grey than that of the original to give birth to a watch as much at home in water as on land, radiating the Mediterranean spirit and its warmth.

Inspired by history, but completely redesigned, the dial now has three-dimensional hour markers with two bevelled metallic edges defi ning an area fi lled with SuperLuminova for a stronger image and optimal legibility. It also features two counters located inside two blue trapezoidal shapes, one at 3 o’clock for the small seconds hand, and one at 9 o’clock for the famous 45-minute counter that marked the history of TUDOR chronographs in the 1970s.

Waterproof to a depth of 150 metres (500 feet), the steel case, 42 mm in diameter (compared with 40 mm on the original) has a bidirectional bezel with a blue anodized aluminium insert. Under its sapphire crystal, it houses a self-winding mechanical chronograph movement with a 42-hour power reserve.

The distinctive crown and pushers are knurled with a chrome fi nish. The crown is adorned with a blue lacquered shield.

As an additional refi nement, TUDOR’s new Heritage Chrono Blue comes with two bracelets, one in steel with a folding clasp, the other in reinforced fabric with a buckle. The fabric strap – the outcome of cooperation with a firm still carrying on the age-old art of traditional weaving – echoes the characteristic colours of the dial and provides exceptional wearing comfort: an extra touch for a chronograph that takes its inspiration from history but makes an utterly contemporary statement.