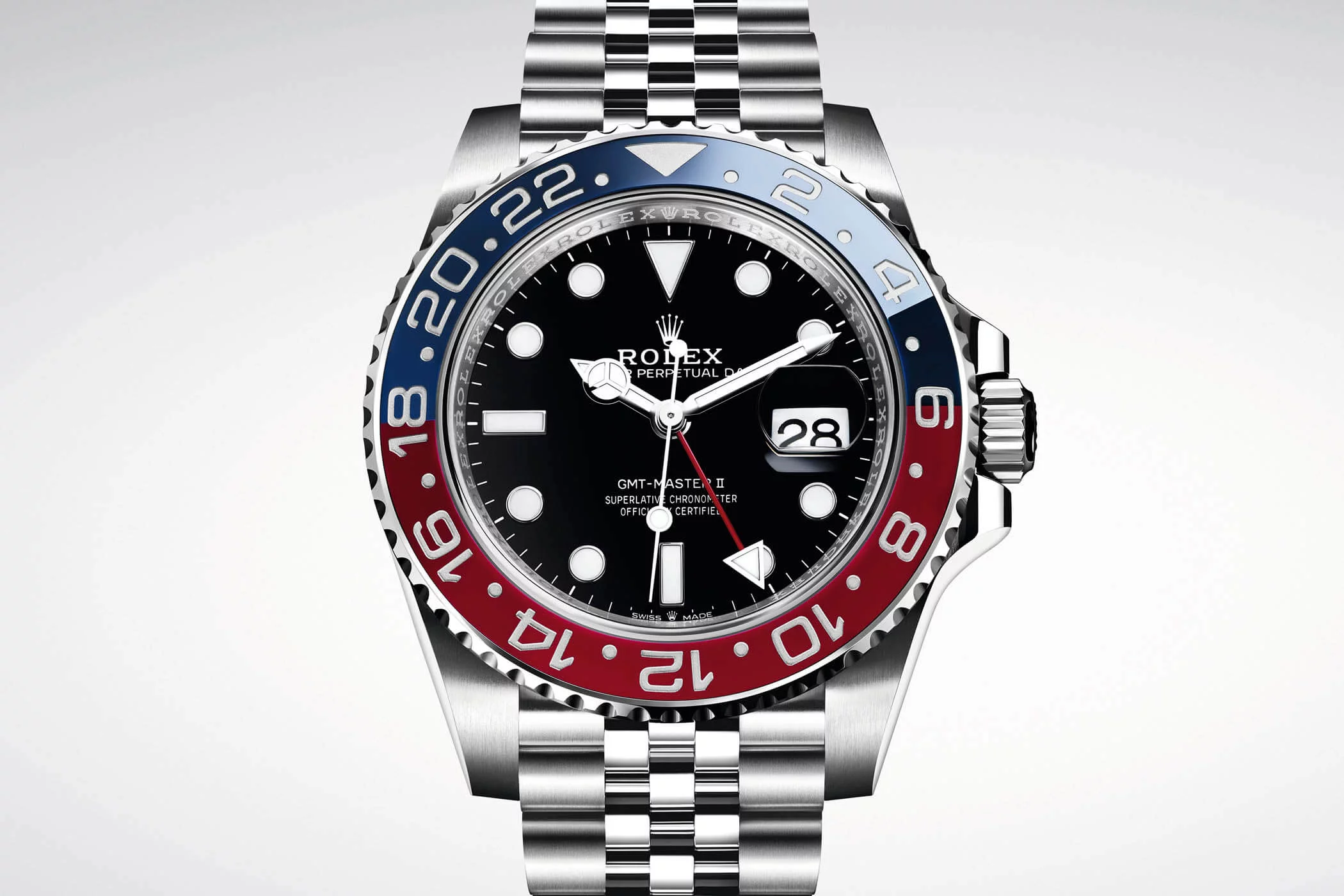 The Statement of Horological Position 2020: The Year That Was

The statistics for Swiss watch exports in 2020.

2020 was the year that very few were expecting initially, and also the year we will likely never forget. With lockdowns gripping the world to shield people from the damage caused by Covid-19, there have been very few reasons to celebrate. As such, there have been very few reasons to buy the expensive luxuries we all love. A recent example in Forbes stated that sales of champagne dropped by an estimated $1.2bn in the wake of countries locking down and spenders tightening their belts on needles expenditure.

Naturally, that means that the exports of Swiss watches have also declined, and while a select few nations saw growth in their sales, nearly all of the top 30 markets for Swiss watch exports reported a loss. So, as ever, WristReview returns to present you with its Statement of Horological Position. In the same way that corporations are required to submit to the government a Statement of Financial Position (also known as a balance sheet), we present our own report to you, our readers, for your perusal.

Before we begin, we should mention that this article only covers the Swiss watch industry and its exports to other countries, and does not include Japan, Germany or other exporters of wristwatches. Also, some figures represent exports to countries, not necessarily business sales to the end consumer. Therefore, they cannot give an accurate representation of how individual companies are performing sales-wise. This article is not intended to compare different businesses. The figures represent the exports to the top 30 nations which imported the highest value of Swiss watches, a full list of which countries these are can be found on the ‘Statistics’ page of the Federation of the Swiss Watch Industry website. Finally, it should be noted that some export data from the FHS used in this article was provided to the FHS by the Swiss Federal Customs Administration and it is, therefore, possible for the figures to change. 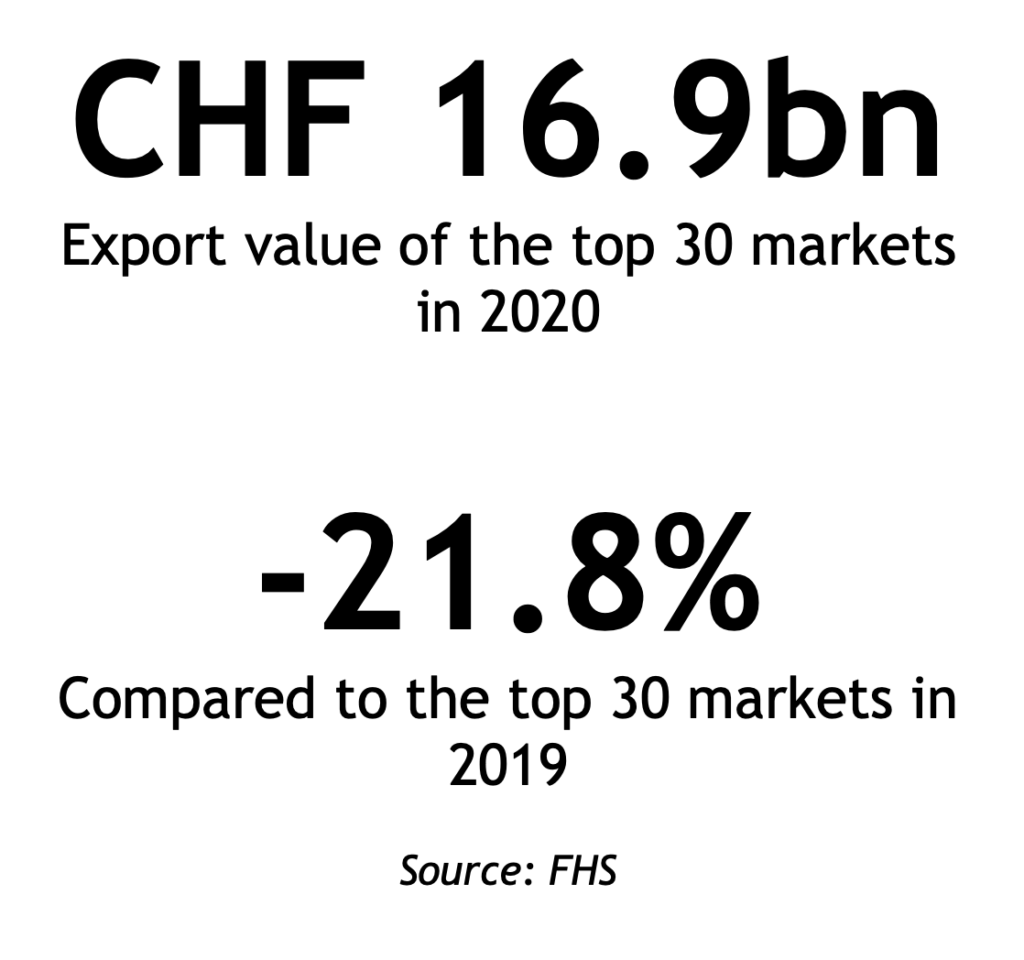 According to the FHS, the total value of Swiss wristwatches exported to other countries dropped by a staggering 21.8%, 2019 had seen a slight increase of just over 2% thanks to increases in exports to the USA and China. The total value of Swiss watches exported was CHF16.9bn, down from CHF21.7bn the year before. In total, the number of Swiss watches that were exported sits at 13,775,470, which resulted in an even larger decline of precisely one third (33.3%). 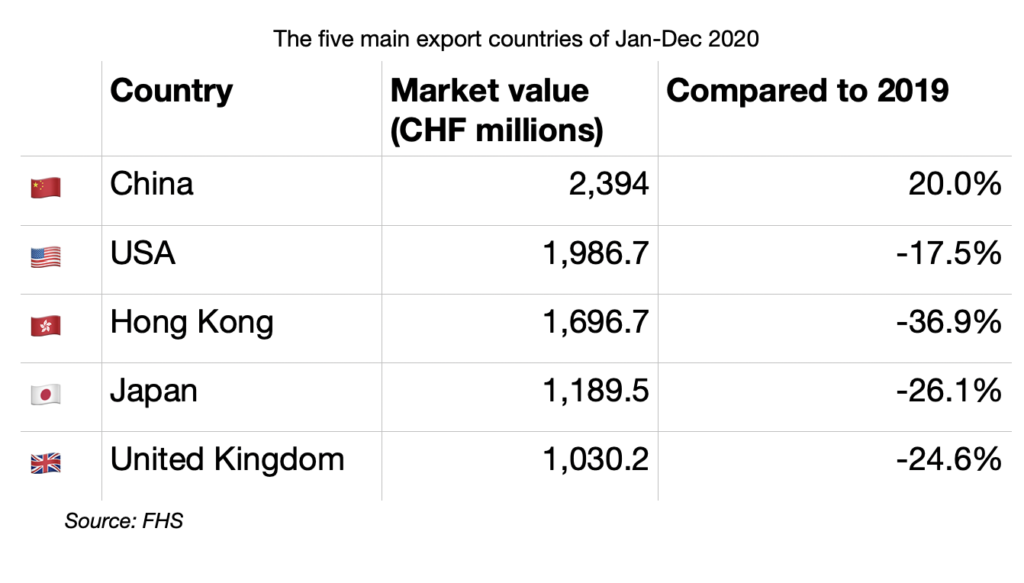 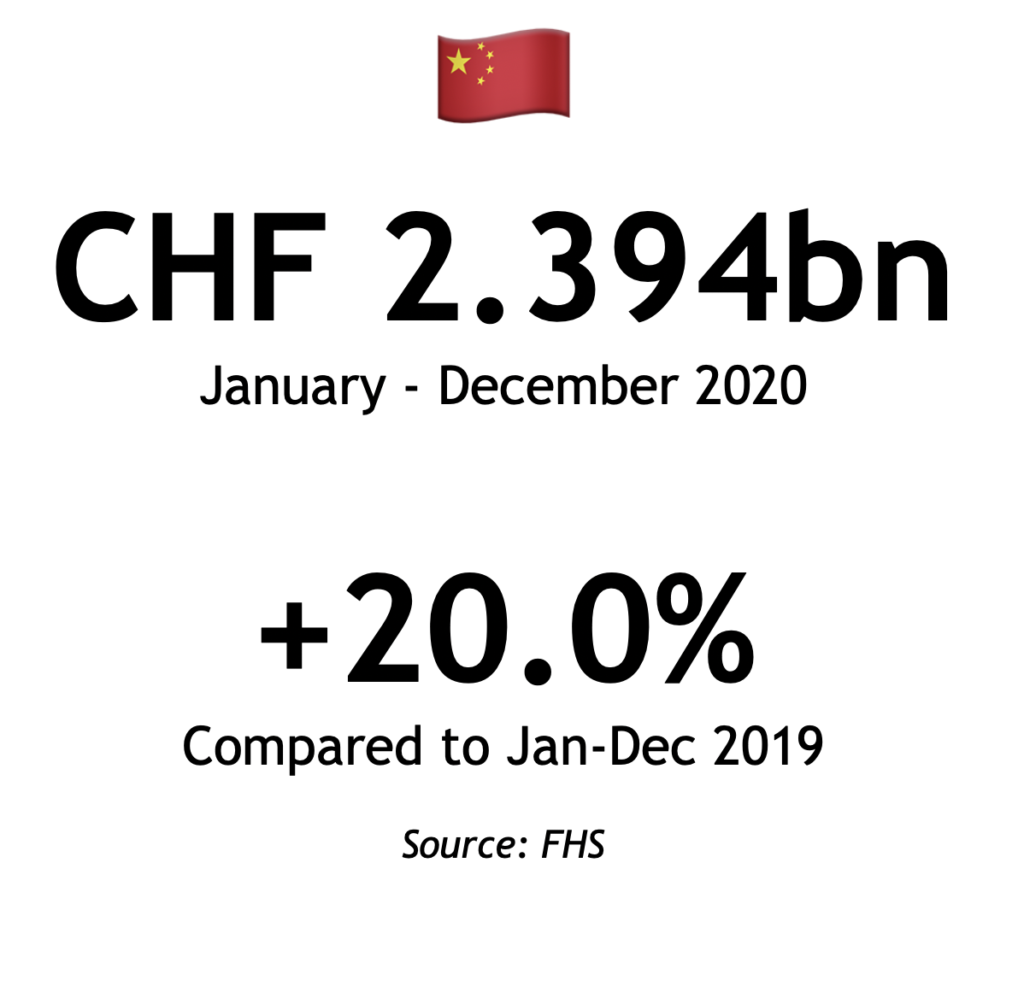 Of all the 30 largest nations for importing Swiss watches in 2020, only three of them posted an increase in the value of watches they’re importing. Those countries were China, Oman and Ireland. Every other nation saw a decline in imports, leading to that 21.8% decline we saw earlier. Surprisingly, China’s total growth was as large as it was unexpected; the FHS reported an increase of 20% in the value of exports to China. This may be because China was able to lift its lockdown earlier than other countries. In my mid-2020 statement article, I noted that China was the only country to see an increase in its June imports thanks to its ability to contain the Covid-19 situation and emerge with money to spare. The same cannot be said for the rest of the world at the end of 2020, especially Europe, which saw a decline of 9.7% in its export value. This is due to governments once again locking down their citizens in preparations for the impact from the second wave they undoubtedly had a significant role in causing back in summer. 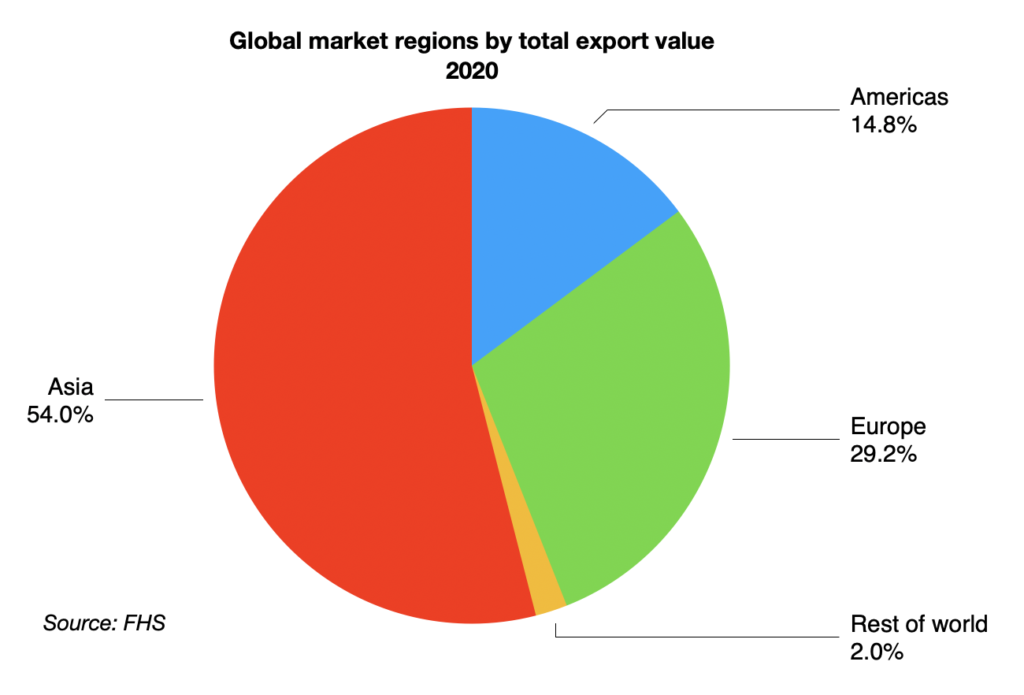 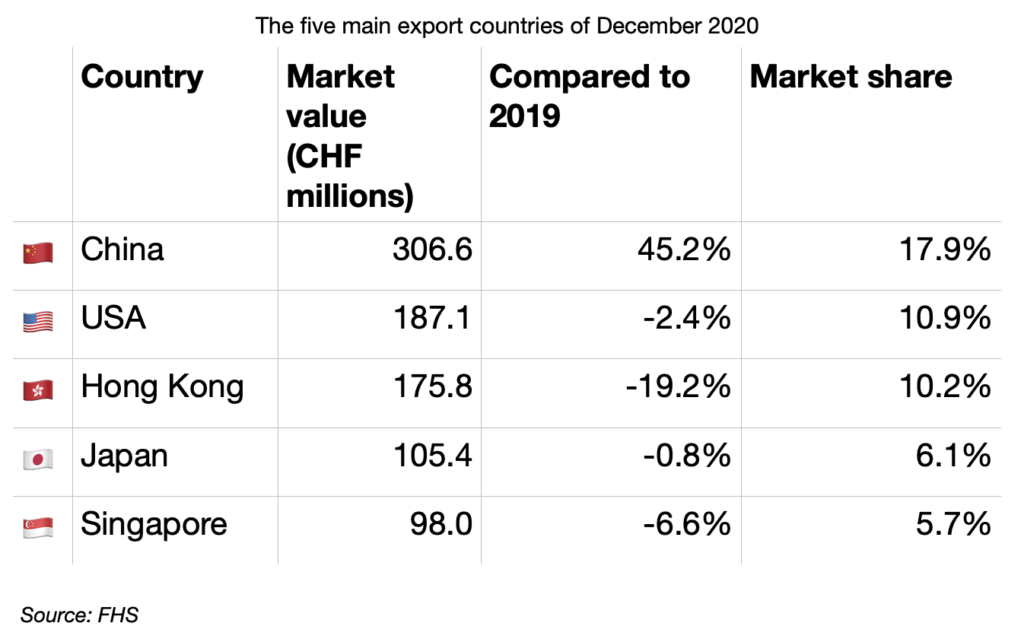 The FHS breaks down its categories for Swiss watch exports, and one such example is the export price category. The only part of this to see an increase in exports is the CHF500 – CHF3000 band, which reported a 19.5% increase in the value of watches within this price band. All others (<CHF200, CHF200-CHF500 and >CHF3000) had value declines ranging between 6% and 20% with the worst affected being the <CHF200 section.

If breaking down the FHS’ numbers into watchmaking materials, only watches made of stainless steel and watches in the ‘other metals’ category saw an increase in their export values. Precious metal, two-tone (featuring gold and steel) watches and watches labelled as ‘other materials’ all saw declines in exported watches’ value.

Now we’ve covered the stats, let’s take a quick look at some of the things we think contributed to the latest results.

Typically, we’d do two or three small points here, but there’s only one real reason for the decline last year, and we all know what it is.

Must we say it?

Covid-19, here we are once again, in fact, it’s worse this time because now the threat appears to have faded into the background for some people. Now folks are acting stupid and selfish (at least more so than usual), as if the fact that we’ve been in and out of lockdowns for coming up to a year the threat has gone away. But let’s cast our minds back to last year, for us in the UK things changed around March when the government announced the first lockdown. I was sorting through some newspapers on the evening the Prime Minister announced that the government was instructing us to stay at home.

In the month or two after that, things were quiet. The roads, the shops, the schools they had all closed down with people staying indoors and being responsible. They only went out when they desperately needed to, and it brought people together in a way. It reminds me somewhat of the Doctor Who episode entitled Gridlock, which sees the remains of a future humanity trapped in an endless traffic jam confined to their futuristic car/motorhomes, their only company being the people around them who are also trapped in the same traffic jam.

Everyone here did the best they could when the first lockdown came in, supporting one another by going out shopping for vulnerable people, talking to their neighbours more and generally trying to make the best of a bad situation. In a way, it’s similar to the British Wartime Spirit, where people had to make do because, well, they just had to. Heck, if you went into a supermarket during the first lockdown, there was a high chance that Dame Vera Lynn’s We’ll Meet Again would be playing to keep people in good spirits.

Oh boy, how things have changed. At least once a day on social media, I see news reports or videos shared by friends of people acting so irresponsibly that it hurts. Perhaps the vilest of all was an article I read this morning about how Covid-19 deniers and other conspiracy theorists have taken to invading hospitals and abusing nurses and doctors, calling them horrible things such as “ventilator killers” and accusing them of keeping people in hospitals unjustly. The fact that this happens, and the fact that there are likely to be people reading this and increasing the risk by going out when they know they shouldn’t, is distressing.

I’m not sure how China, Oman and Ireland have been able to post positive growth during a time like this, but they show hope for Swiss watches yet. Don’t forget as well that there was a period where Switzerland’s watch factories closed. It’s not like the Swiss were pumping watches out only for them to sit around in a warehouse.

I hope that more watchmakers and watch retailers can sort out online commerce. It goes against the idea of luxury goods which are inherently hard to obtain, but with the world the way it is their high prices are the most prohibitive factor anyway. They should be doing more to ensure people can buy their watches from the safety of their homes to get the most out of this situation.

The World Health Organisation reports over 100m confirmed cases and over 2.1m people have died worldwide as a result. Sure, that’s low compared to the number of cases, but that’s still two million too many.