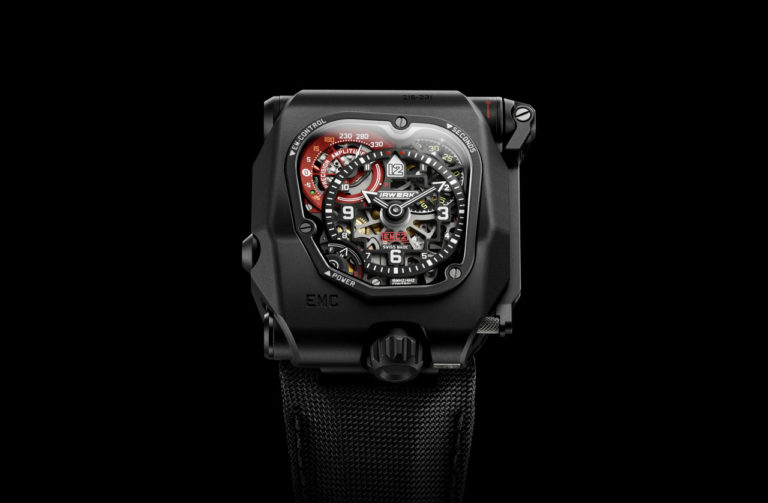 Although Urwerk has only been in the watchmaking industry for the past twenty or so years, but the company has certainly made a name for itself, bringing stunning, new revolutions to the watch world by setting the new standard for “Modern Timepiece.” The company’s latest adventure has taken the watch world by storm. The EMC Timehunter is the latest and greatest creation for Urwerk. The original Urkwerk EMC watch was released to the public in 2013, which at first caught the skepticism of many, but over time became a very favorable and serious watch in the industry. This timepiece takes your ordinary, less exciting description of a watch and not only turns it upside down, but also adds some of the latest and greatest technology within the piece. 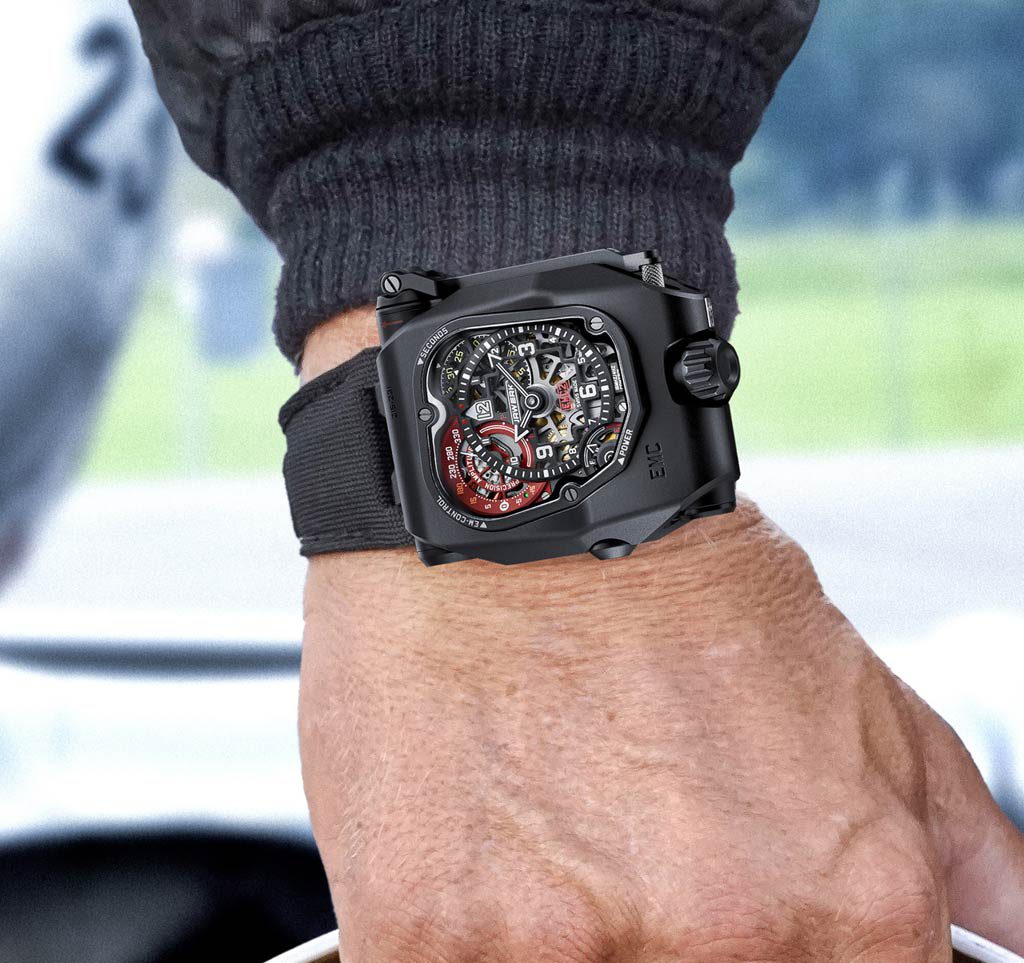 This watch is the world’s first watch that enables the wearer to monitor the precision of the piece as it is worn on the wearer’s wrist, as well as monitor the amplitude of the watch while wearing it. With this feature, the accuracy of the watch can be adjusted for each owner’s way of life as opposed to the accuracy of the piece being controlled by the environment. This enables the interactivity between the watch and its wearer to be spot on with whatever activity both may endure.

Most of us own a watch, but most of these people don’t realize that the accuracy of their watch slowly gets worse over time; the precision of that particular piece diminishes over time and also as a result of whatever activity the watch and wearer endure throughout the course of the day.  Some pieces have to be constantly wound by the owner to keep their accuracy, some watches are self-winding (and even those need to be wound over time), and some yet wind themselves when worn by the owner.

The name EMC TimeHunter X-Ray comes from the skeletonized dial on the face of the piece, which allows the owner a great inside view of the mesmerizing mechanics of the piece. The watch is almost completely black, but displays the EM-Control precision amplitude meter in red and displays the seconds gauge in green. The watch has a very reasonable 80 hours worth of power, and the reserve of the watch’s power is indicated by the gauge at the 7 o’clock dial. Two sapphire crystals help operate this piece, the watch is coated in grade 5 titanium, and is a very small 43x51mm considering the amount of features displayed on the face of the watch. 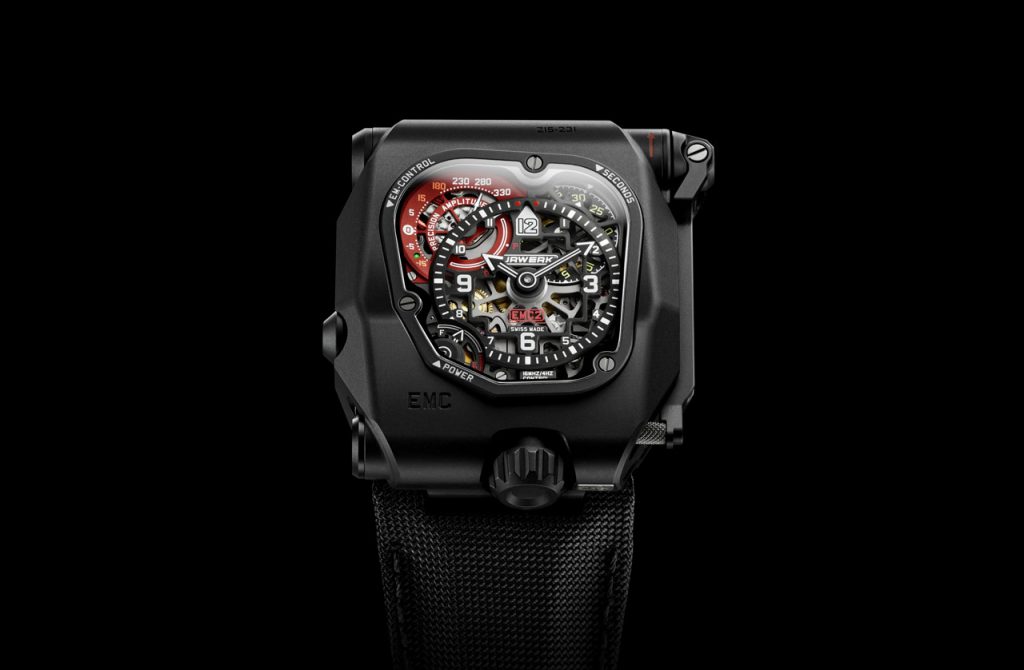 In order for the wearer of this watch to have complete control over the mechanics of the watch, Urwerk gave the EMC TimeHunter X-Ray electronic elements. This complete control can be utilized through the miniature hand crank that is installed in the watch at the 3 o’clock dial. The watch doesn’t have an ordinary battery in the sense that most people would think, but instead has a Seiko Spring Drive movement capacitor. This internal mechanism powers the watch and the electronic rating module which can be seen at 11 o’clock on this piece. Interesting fact, the technology that operates this capacitor is the same technology used to power the Mars rover. 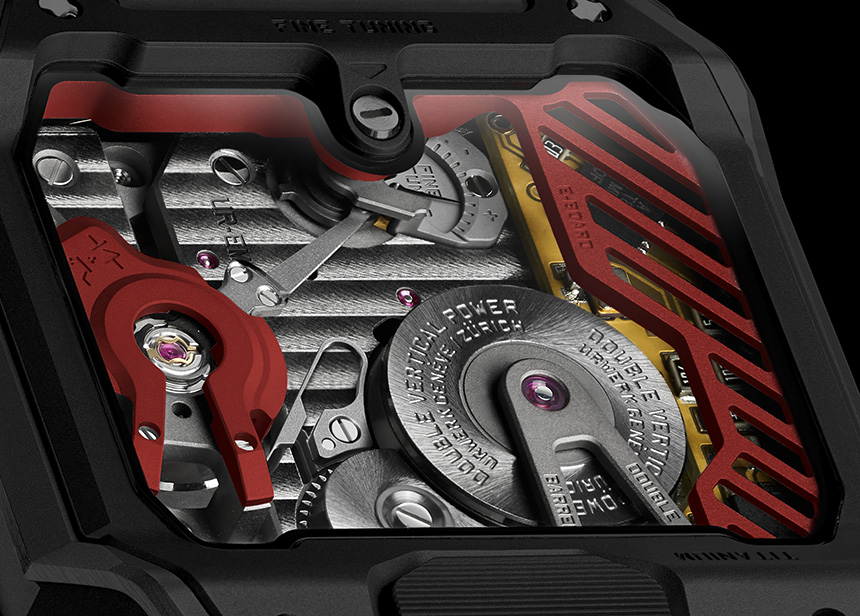 Once this watch is powered on by a button at 8 o’clock, the watch takes a slight pause, and balances the amplitude. A green LED light is then lit up on the EMS dial, which indicates that the watch is running as it should be. The light only comes on when the watch accurately measures outside influences and can still maintain its accuracy. The wearer of this watch also has the ability to self-adjust the watch as needed by moving the adjustment screw on the back of the piece. It only takes a few manual twists of the screw before the watch is regulated again. This self-adjustment screw is known as the Calibre UR-EMC.

The Urwerk tradition will continue strong as only a very limited number of EMC TimeHunter X-Ray watches will be produced- fifteen to be exact. And of course, with the number of watches being limited, the price for one will be set at an astronomical CHF 125,000. For more info, please visit urwerk.com