This watch was first seen to the world by Victorinox at the recent Baselworld 2013. The watch features a sandblasted matte titanium dial and a dark brown brushed leather strap reminiscent by old leather pilot jacket from the 1930s. The watch also displays military time, printed on the inside of the dial. Expected to be released this November, the Victorinox Swiss Army AirBoss Automatic Titanium Limited Edition is expected to be priced at slightly over USD1,000. 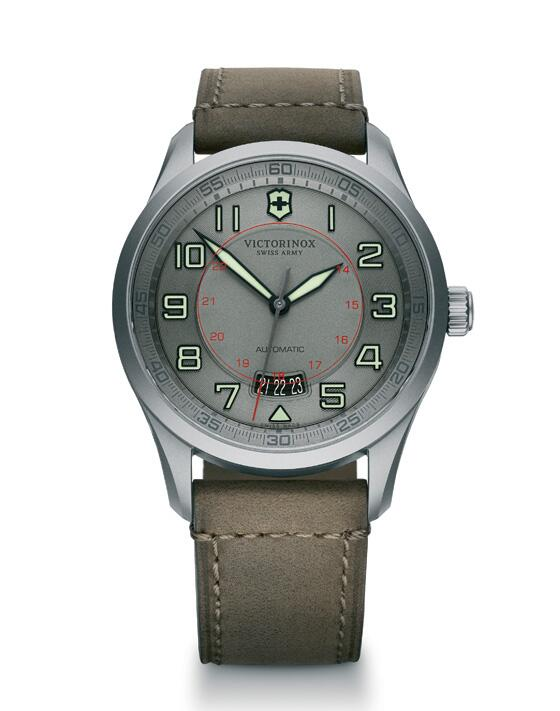 Powered by an ETA movement (actual caliber was not disclosed but I suspect it would be the 2892 since Victorinox has been using this caliber for a number of its watches already), this watch is 42 mm in diameter.

To ease legibility, large sword-shaped luminescent hour and minute hands are provided. Matte black applied luminescent Arabic numerals and markers indicate the hours. The dial is diamond cut and has a smooth sandblasted finish. The crown is also in titanium.

The large date window is at 6 o’clock and allows you to see the yesterday’s and tomorrow’s dates as well.

As a military watch, I love the simplicity and almost sterile dial. The colour combination of the dial, the titanium case coupled with the “vintage” leather strap makes it feel warm. The only comment that I have is the rather large date window. I would prefer it to just be large enough to see one date instead of three in the model. Nevertheless, locating it at the 6 o’clock position is a smart design move as it makes the dial look symmetrical despite the long date window.

Victorinox’s price point for this model at just slightly over USD1,000 is also a pleasant surprise. I would think they would placed it higher. As it is, I believe this could be a runaway winner for the brand. Hopefully, Victorinox would lose the “Limited Edition” plan for this model and make it part of their standard offerings.