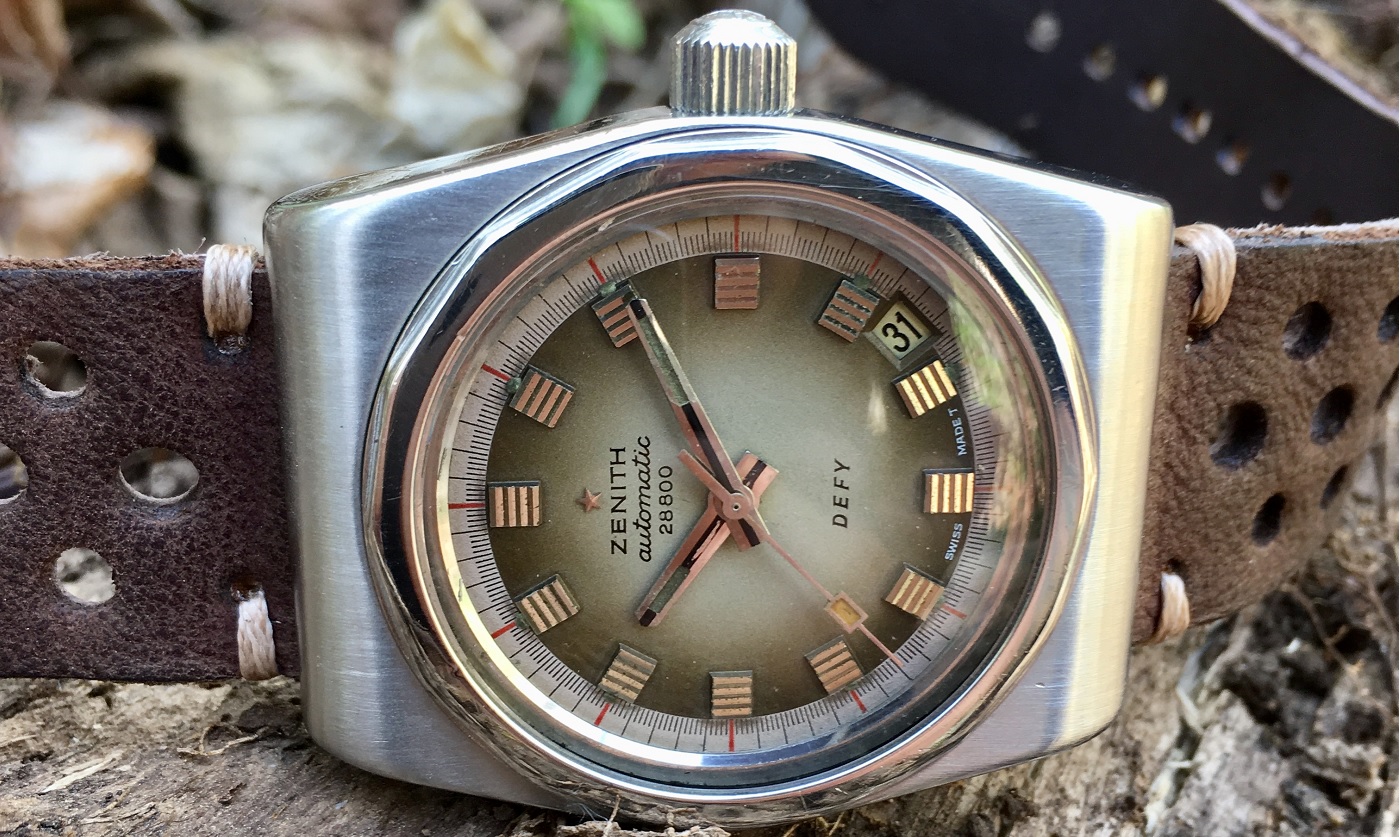 The 1960s through the 1970s brought along innumerable advances in the watch world, not only in technological advancement, but in design, form, fit, and function as well. Zenith, a brand that spans back to 1865, holds a ton of accolades throughout its time in the business of making watches. The subject of interest today is the Zenith Defy: the choice of the adventurous and the bold. It is a well respected yet overshadowed watch that came in quite a variety of choices. Introduced in 1969, the original Defy was housed in an octagonal case and was marketed in Italy as the “Il Casaforte Del Tempo” or, “The Safe Of Time”. The idea behind this creation was to keep up with the evolving sports watch market and develop something that could withstand any abuse that its owner would dare throw at it. As if the massive and muscular cases didn’t offer enough protection, Zenith used a rubber housing that encircled the movement to give it the extra shock protection that the Defy demanded.

These watches were also waterproof up to 300 meters thanks to its screw-down mineral crystal, screw-down caseback, and a screw-down crown to top it all off. Any owner of a Defy back in the day would have been thrilled to walk around with the peace of mind that Zenith incorporated into this watch. Lucky for the vintage collector, they are even better in 2018. The Defy is mostly recognized for two specific case styles that marked the first and second generation. The first being the octagonal case with a Gay Freres ladder type bracelet that was introduced in 1969, with the second one being the tonneau case, or “barrel” case, that was fitted with a lobster type bracelet. The reference A7681 that I present to you today is of the second generation of the Defy, and I believe that one would be hard-pressed to find a vintage piece with more character and flair than one of these.

When you look over the lines and curves of the Defy, you may find that it is something you will love or hate. It isn’t under the radar at all, such as many vintage pieces have the reputation of. The A7681 sports the more common coffee colored dial, but it is worth noting that the Defy came in three colors: coffee, red, and blue. While the red and blue examples are equally stunning to the eye, something about the dial on this one makes it my personal favorite of the three. Whether it’s the versatility of the coffee color, or the absolutely stunning seconds track, it works and it works damn well. The applied hour markers have a ridged texture that reflects any amount of light into impressive legibility, and the modified Dauphine hands are also a major focal point to the eyes. The running seconds hand had an orange luminous paddle that has now faded into a faint shade of its original hue. 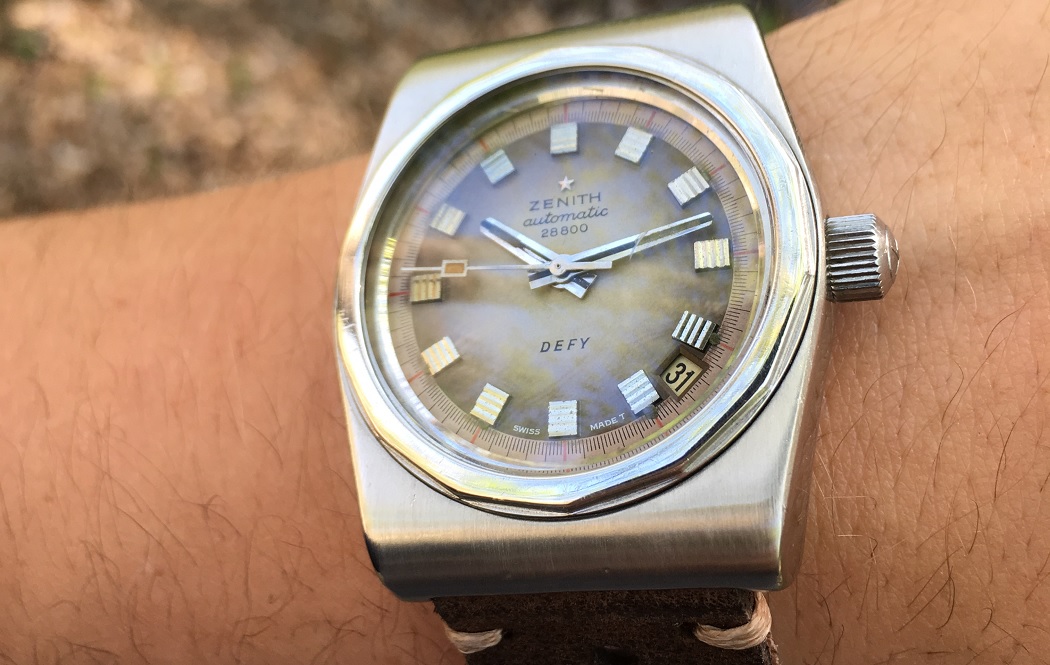 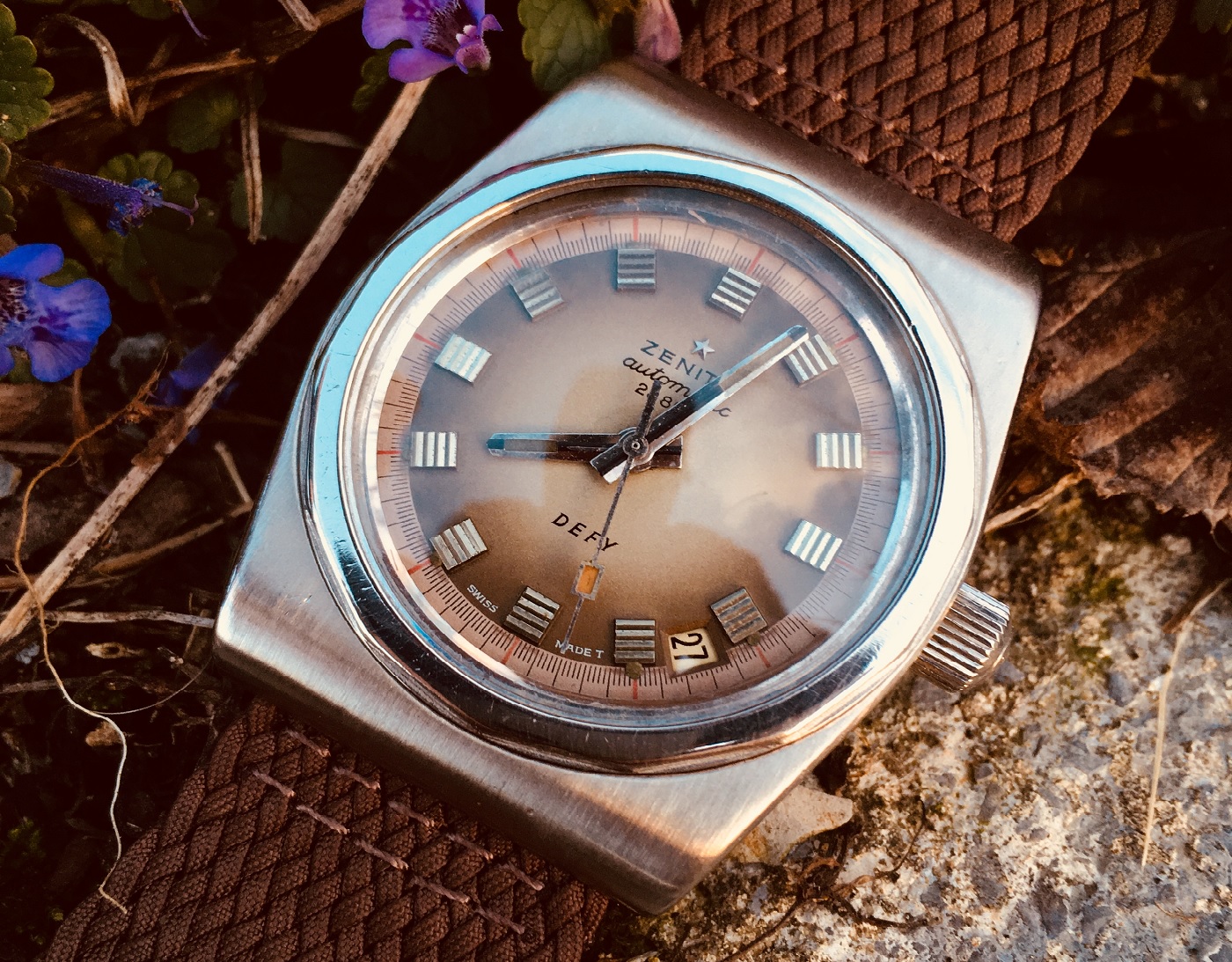 The date wheel is positioned between the four and five o’clock markers, and the wheel has taken on a nearly yellow tint due to the sun’s rays beaming down over the years. Every aspect of this example is original, and the aging process has treated this one well. It has never been polished and it looks as amazing as the day it left the factory. The case shape alone predates the Royal Oak by a few years and manages to still hold a level of intrigue that I think surpasses the Audemars Piguet design. I can only imagine what it must have been like to see one of these for the first time. Nothing else ever looked like it beforehand. The bracelets that these came with also started a new trend that was also followed suit by other companies. They had a smooth taper that meshed with the shape of the case, creating a seamless outline that future brands would capitalize on until this very day. When I look at the Defy, I see an instrument that was well ahead of its time in both looks and technicality.

Zeniths very own in-house caliber 2562 PC drives the soul of the Defy. This was a high beat movement that operates at 28,800vph (it even denotes this on the dial). Chronometer grade, this movement isn’t lacking in the performance department either. With the only complication here being the date, we are left with nothing more than an extremely accurate caliber that was meant to be nestled away from all harm, offering us a worry-free way to carry the time around on our wrist. It is every bit as refined as the rest of this watch and enjoyable to look at.

The Defy is a classic. It is nearly bulletproof and has a look that belongs in its own category. Although it does have a hefty presence on the wrist, it isn’t the bad type. It feels very comfortable and wears unlike anything else in the vintage world. They hold a value that is light-years ahead of what you would expect to pay for one. These can still be had for relatively affordable prices, although one should always be cautious of redials and other inconsistencies you will run across in the wild. I urge the reader to seek one of these out and give it a try. I stand by the notion that this is a legend that will always hold a special place in my heart. There is nothing quite like wearing a vintage Defy. I promise.