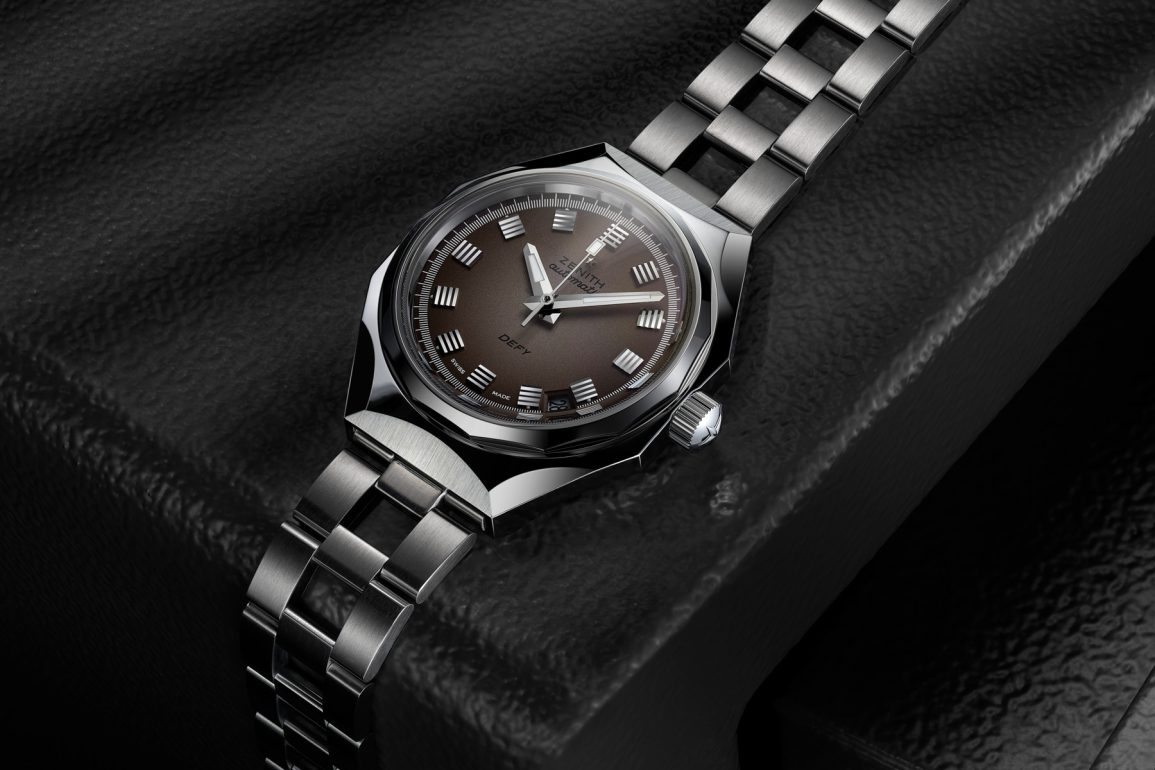 Zenith brings back the first ever Defy with some minor tweaks.

You know, it feels like it was only yesterday that we were talking about a limited edition Zenith revival watch based on an old model. Oh wait, it was only yesterday! As it’s the beginning of the year, most watch brands are psyching themselves up to release new pieces. Unfortunately, this comes at about the time of year when I should be in hibernation, so if I nod off, then don’t worry, it’s not because of the watch. 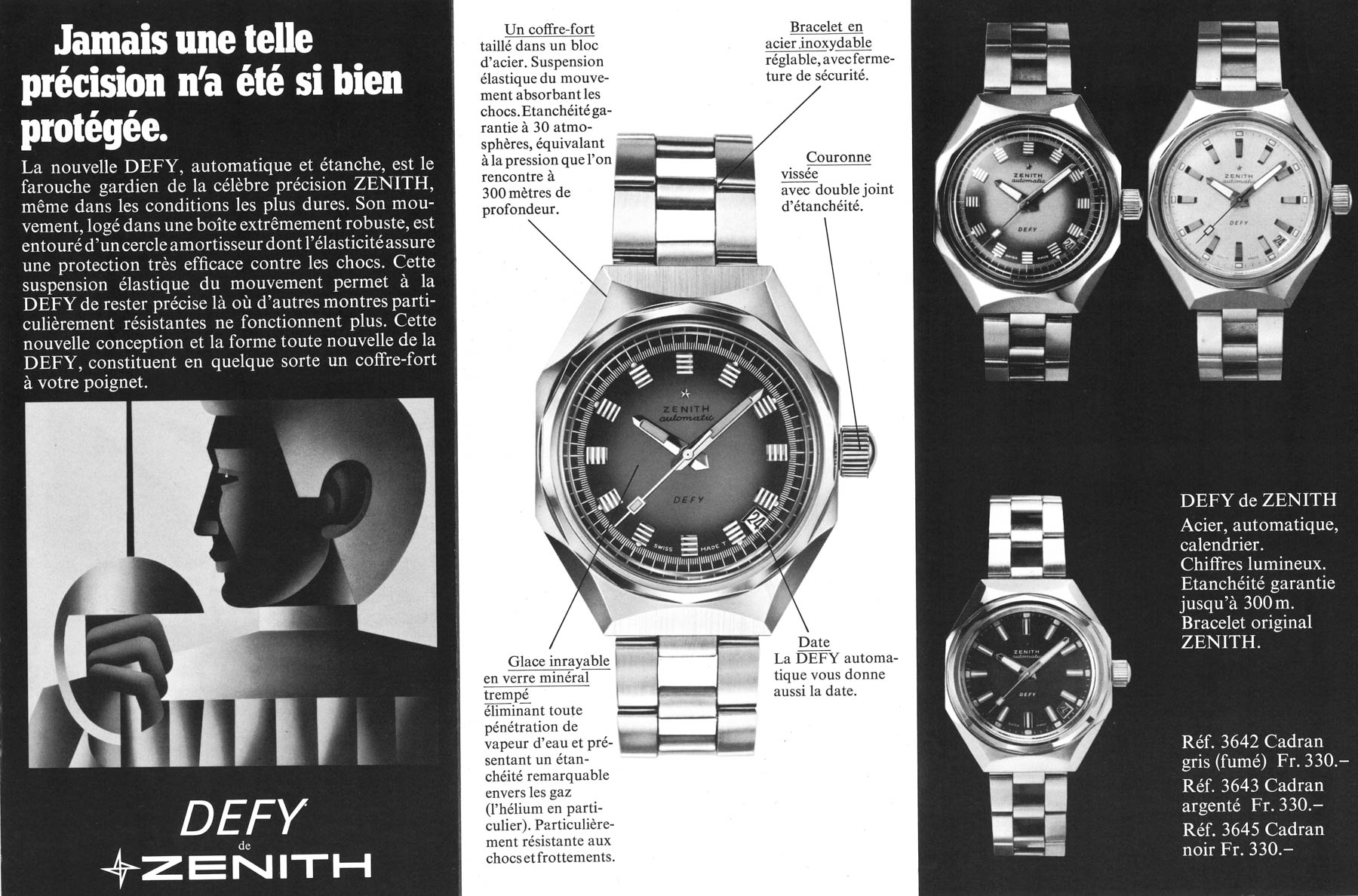 Before we go any further, let’s take a look at where the Defy range comes from. While it is probably the range that brings the most cash in for Zenith, the original Defy watches were professional tools designed for specific people and came around in 1969. A mixture of shapes, the chunky cases of the first Defy models were octagonal (8-sided) but came with a tetradecagonal (14-sided) bezel. You might associate octagons and bezels that are not round or square with Gérald Genta, and for a good reason, the Royal Oak is an enormously popular watch, but it wasn’t the first.

Unlike the Royal Oak, which was meant to bring back Audemars Piguet from the dead and make stainless steel a luxury material, the Defy was built to work just about anywhere. With a 37mm case, water resistance to an incredible 300m of water resistance (this was the late 60s, after all) and a flexible shock absorber for the movement, the Defy was set to be the tool watch of all professionals everywhere. Unfortunately, it didn’t sell too well and never became the big hit it is today. Some say that was because it was released before its time, and that’s probably true, but it does mean these watches are rare to find in untouched condition. 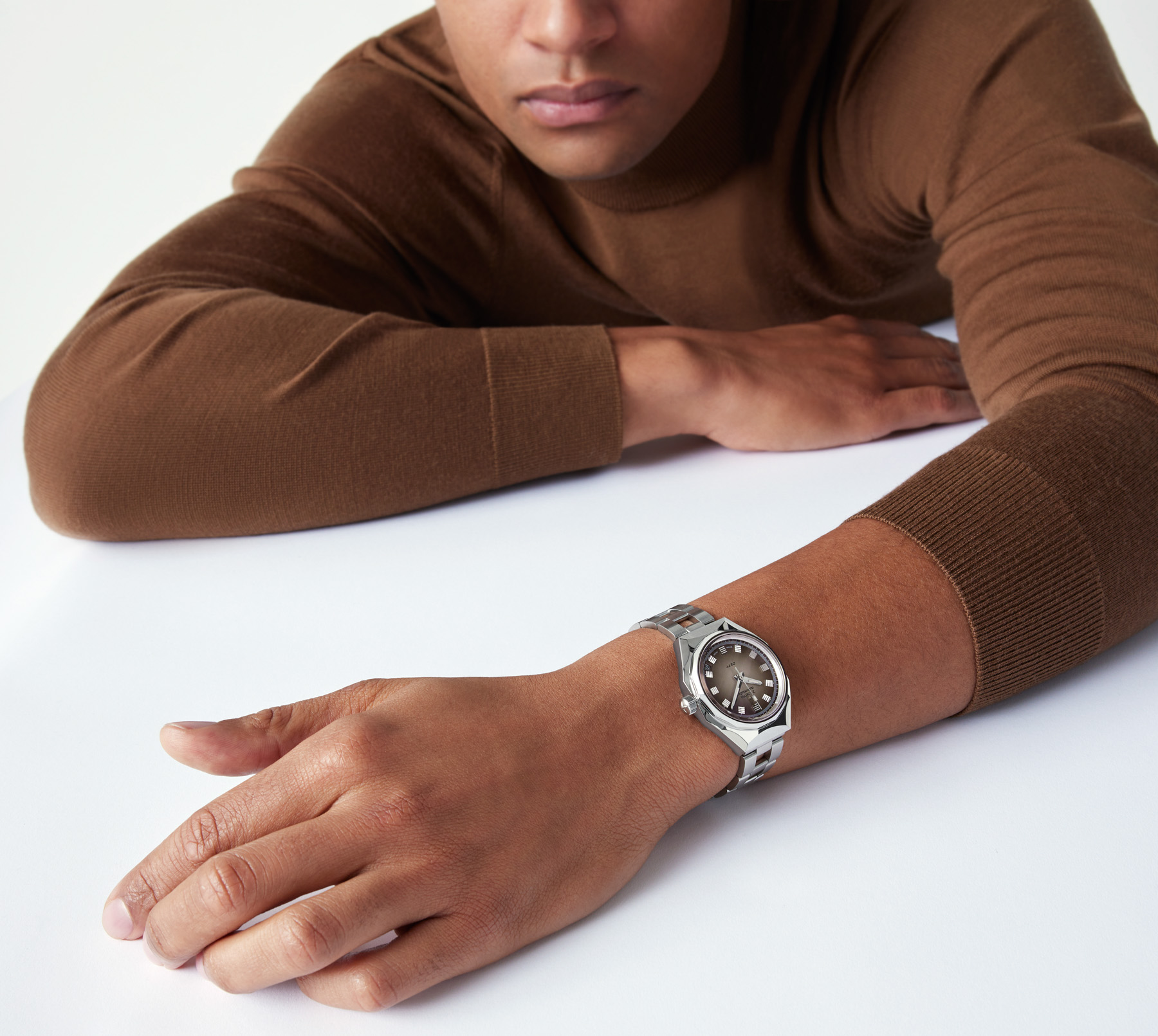 To increase the value of those who own untouched originals while also scuppering anyone else’s chance of getting one at a good price, Zenith has released re-edition. Unsurprisingly, it’s mostly faithful to the original. It still has a 37mm stainless steel case with two types of ‘gons’ shaping the case and bezel. The watch is also now water-resistant to 300m. The dial features a classic brown-ish fumé dial which starts light in the centre and gradually gets darker as you head to the edges and a date window squidged in at 4.30 as it was on the original. 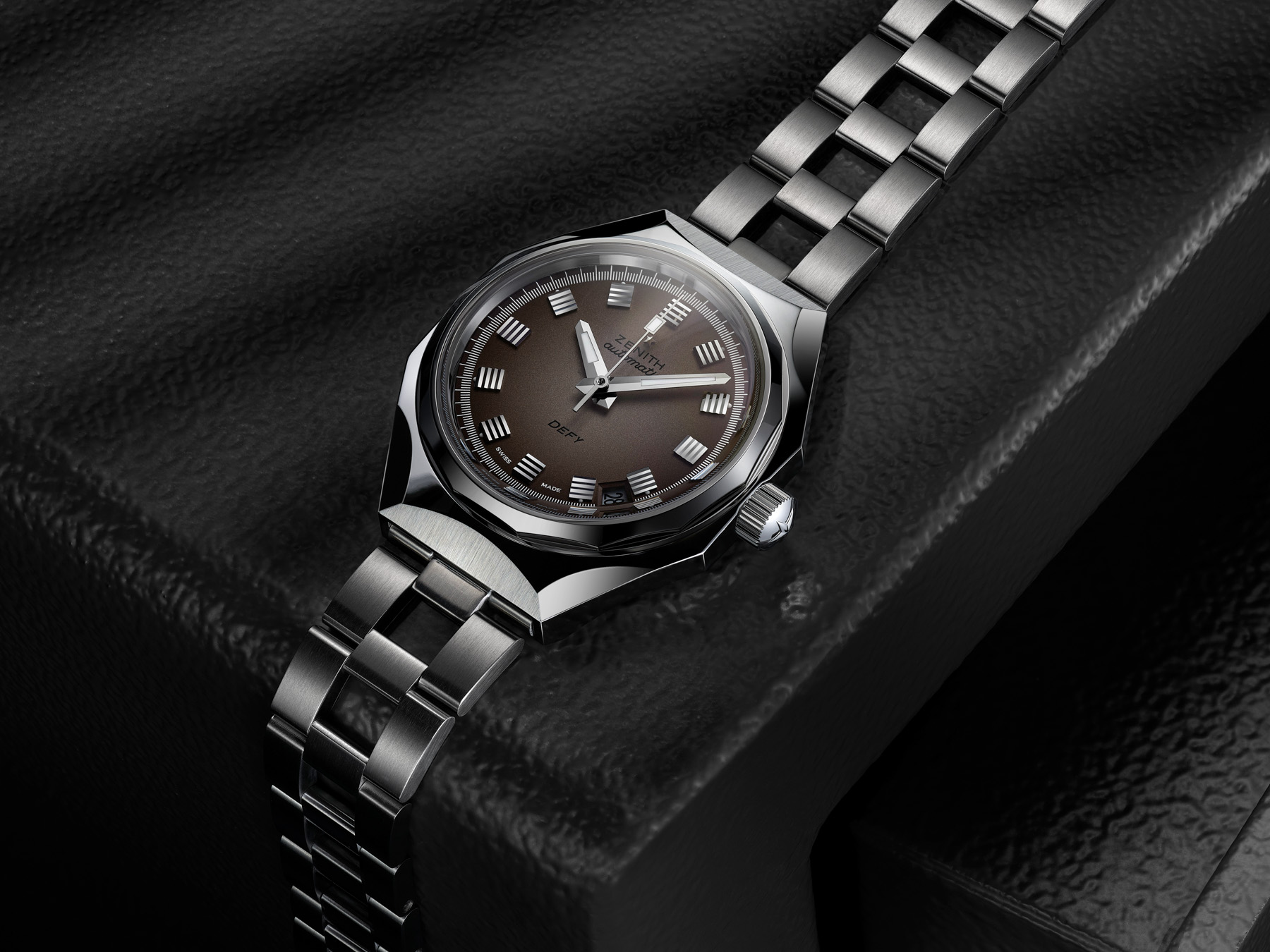 The stainless steel ladder-style bracelet is faithful to the original, although I haven’t seen the clasp in any of the press images. The original bracelets were manufactured for Zenith by the bracelet specialists Gay Frères, who also made the bracelets for Audemars Piguet, Patek Philippe, Jaeger-LeCoultre and many more. Today, what’s left of Gay Frères makes bracelets for one company, Rolex, which acquired the bracelet maker in 1998. 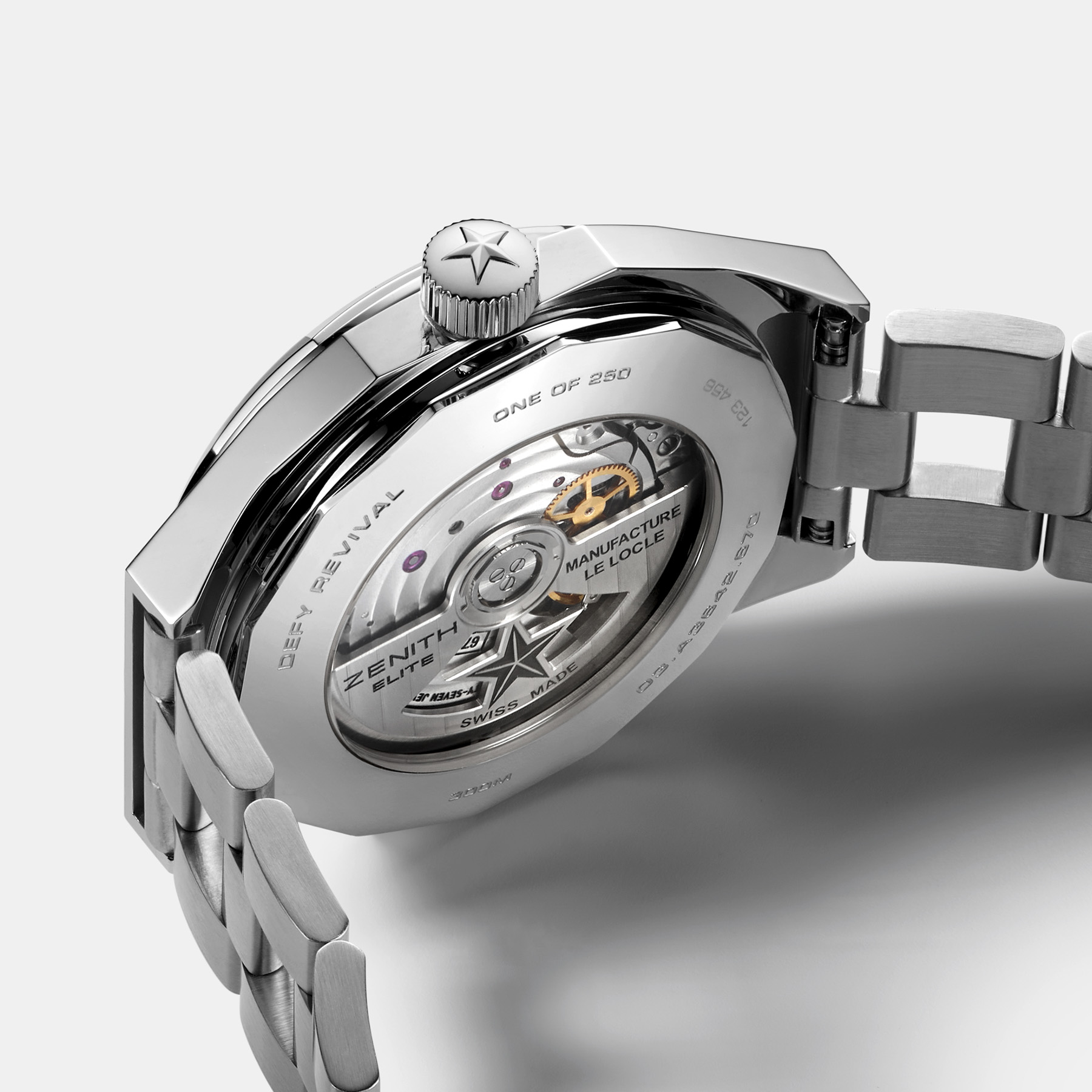 Around the back is where we see the first of the changes from the original, a sapphire crystal caseback covers the automatic calibre Elite 670, an ultra-thin automatic movement released in the early 90s. It features a 50-hour power reserve and a 4Hz beat rate as the later first-generation Defy models did (earlier models had a 3Hz movement and lack writing on the dial stating this. 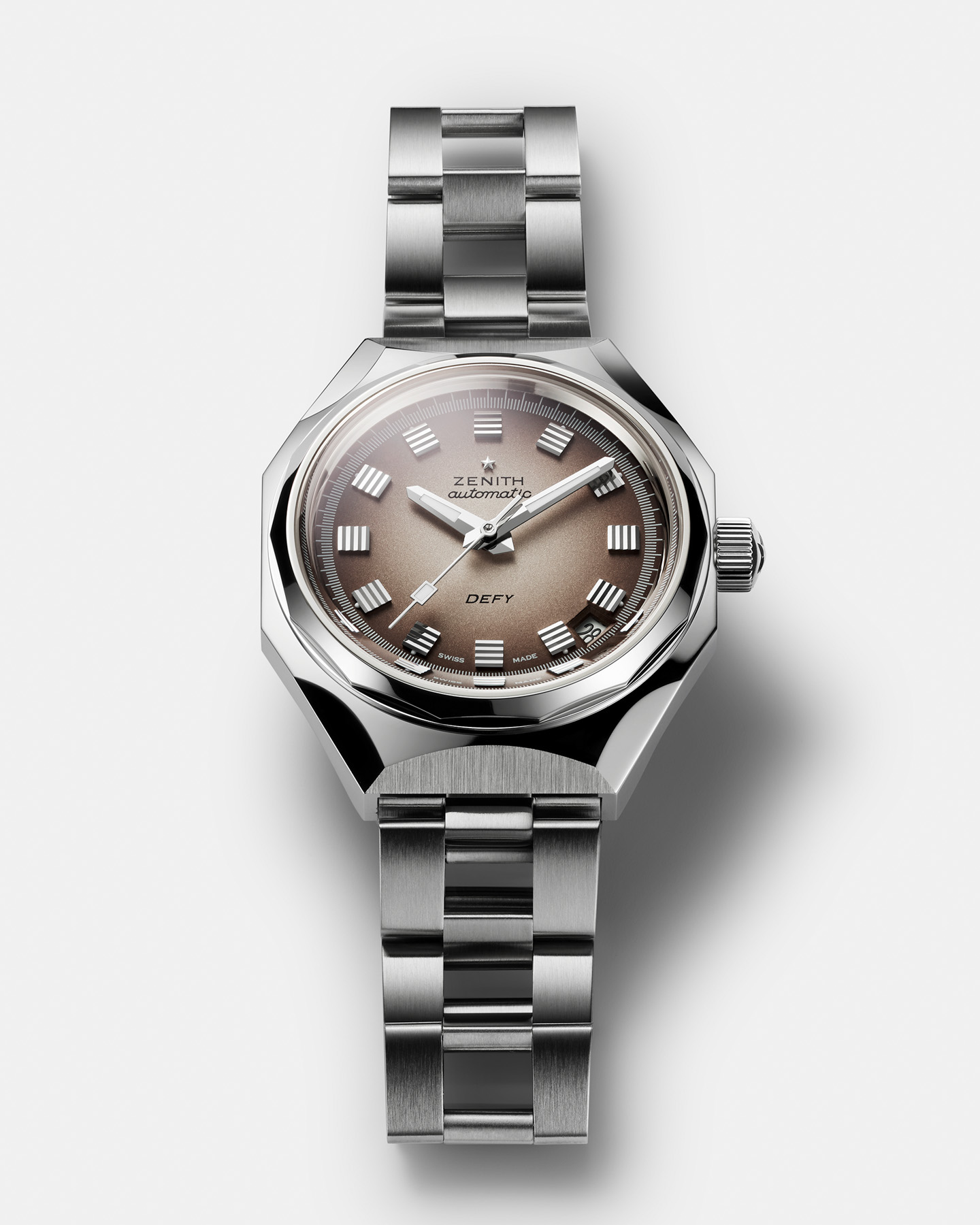 Speaking of missing things from the original, Zenith has changed a few bits and pieces here and there, which means this is not a perfect replica (we’ll give them a pass on the movement). As mentioned, the original had a closed caseback as mentioned, and the crystal over the dial on the originals was a mineral crystal, whereas the revival model has a sapphire crystal instead. The crown is different too. The original had a 4-pointed star inside of a halo which seemed to be Zenith’s logo at the time (sans halo) judging by their press material. Now their logo is the 5-pointed star which explains that. Zenith hasn’t mentioned whether the shock absorber I mentioned earlier has been built-in. Apart from that and perhaps a slight re-work of the bracelet links, I can’t see much else that’s different from the originals. At least they avoided fauxtina. This is perhaps not the revival Gregory Porter sang about in his song of the same name, but it captures the looks well enough.

The watch is limited to 250 examples and will cost CHF6900, and they’re available now, although there is something else in the pipeline soon too, so stay tuned for that.