A Fortnight Review: Two Weeks On The Wrist With The Chopin Opus 10 No.12 “Revolutionary Étude” Limited Edition Watch 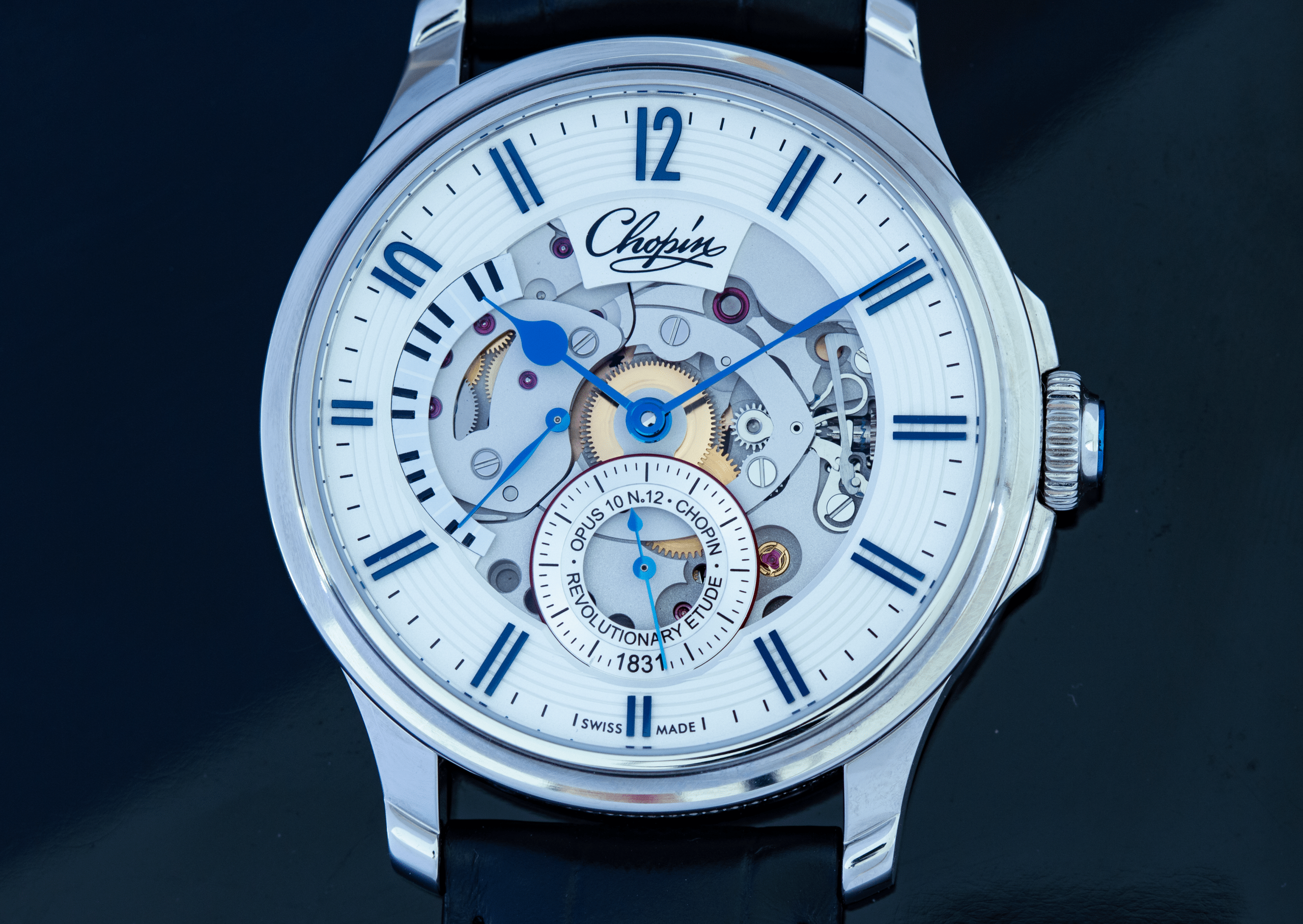 The Opus 10 No.12 watch is the first watch from a brand new, Poland-based, watch company called Chopin. Their watches pay tribute to the musical virtuoso with subtle cues incorporated into an elegant design. To find out more about the brand, and to see this watch unveiled, WristReview was invited to Warsaw in Poland to see the launch of the brand and its first watch. You may remember that we covered it some months ago. Unfortunately, while other blogs had access to the watch the next day for some closeup photography, a strict timetable and early flight meant I was restricted from doing my own photos. 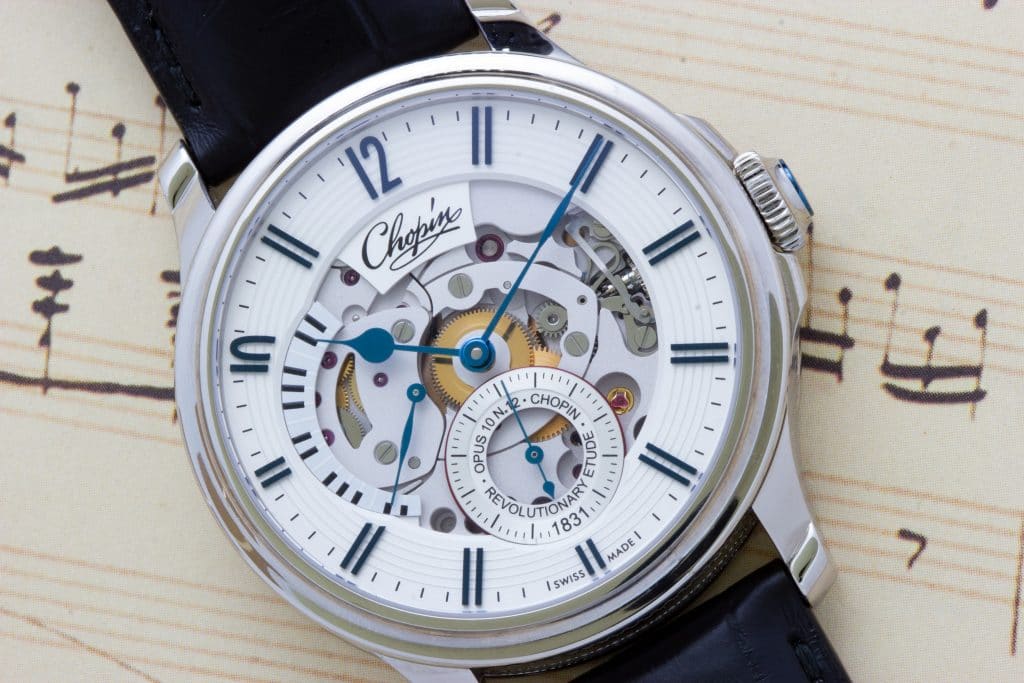 So, in classic WristReview style, I decided to go one better. Rather than simply have a look at the watch through a display case and call it a day, I got in contact with the brand’s co-founder, Mr Michał Dunin, to see if I could borrow one of these watches for a signature Fortnight Review. I’m delighted to say that it was indeed possible, and now I’m going to tell you about my time with this most exciting wristwatch. First, a little background. Frédéric (or Fryderyk) Chopin lived a rather short life of just 39 years, however, in that time he was able to establish for himself a reputation as an excellent pianist with incredible skill coupled with ingenious technique and flair that made him stand out amongst his peers. Though he gave very few public performances, he was very popular in the music world at the time and formed a great friendship with Hungarian composer and pianist Franz Liszt. The Romantic era set the scene for Chopin, who was a frequent visitor of salons in Paris where he spent much of his life after leaving Warsaw just before the November Uprising (1830 – 1831). 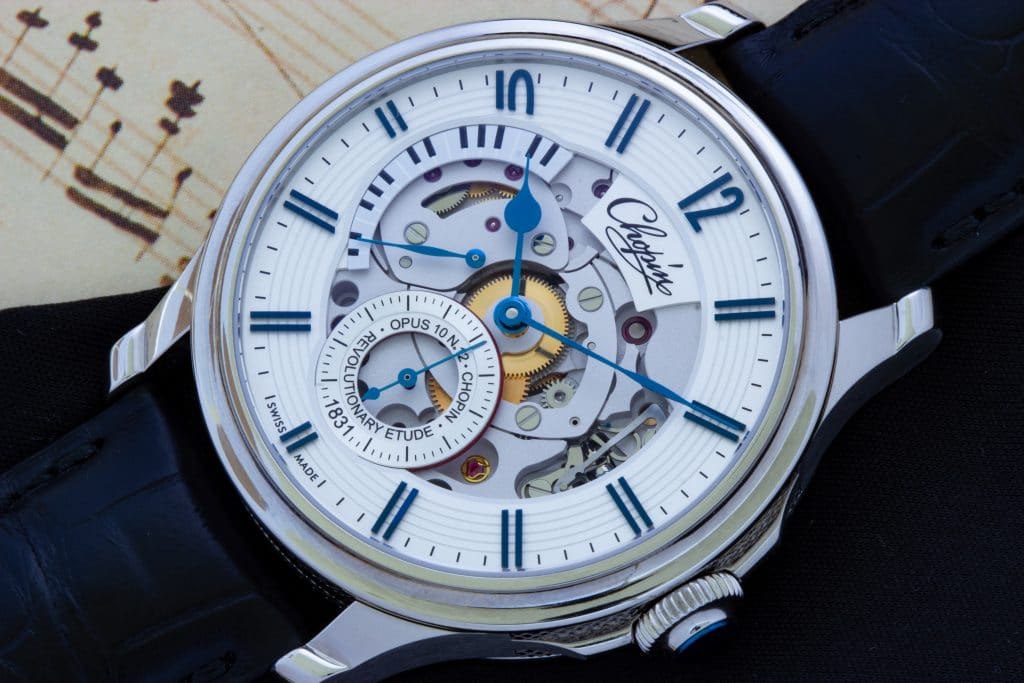 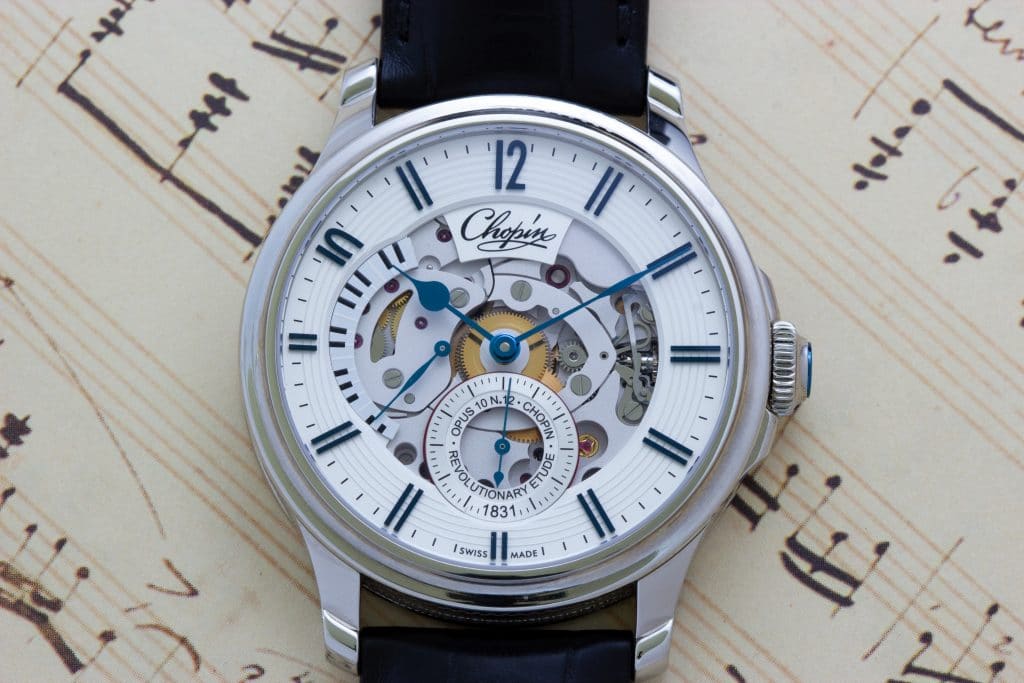 The design of the watch is clean and attractive, with just enough piano-related idiosyncracies for someone to join the dots between the name Chopin and the pianist himself. The most obvious of all these design choices is the power reserve indicator, which has been decorated with the keys of a piano. It’s quite easy to read at a glance, though you will be able to see from my pictures that the hand does not travel from edge to edge on the display. Most of the photos for this watch were done with an empty power reserve to prevent the hands from moving and disturbing the long exposure photos required for this level of depth-of-field photography. 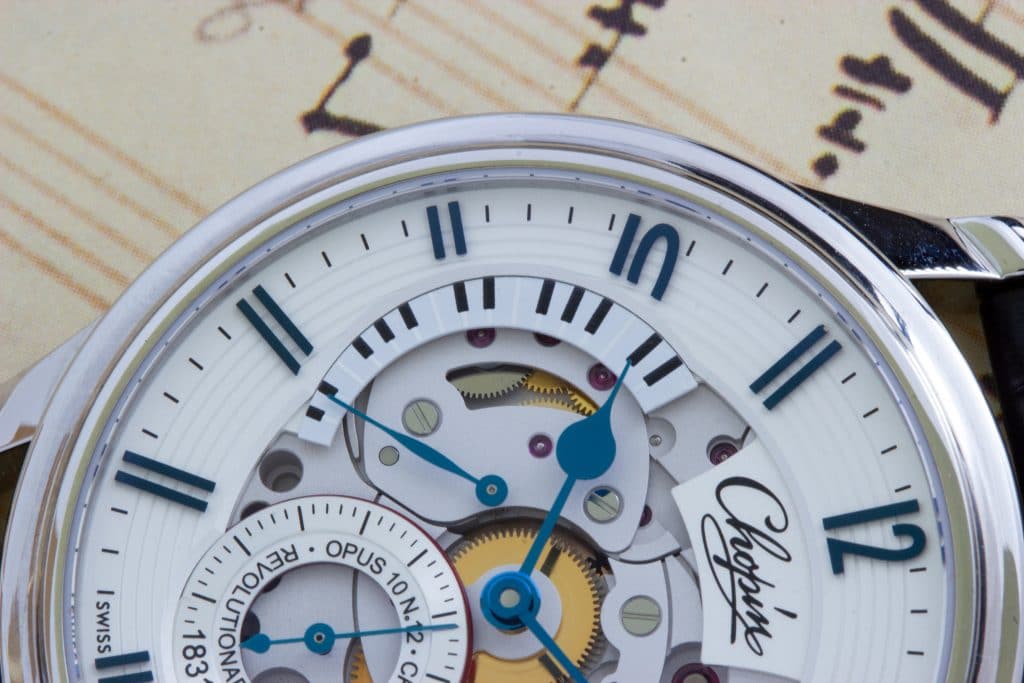 The hand for the power reserve does not meet the edge of the piano-key power reserve display. Depending on your level of OCD, this could prove a little frustrating. 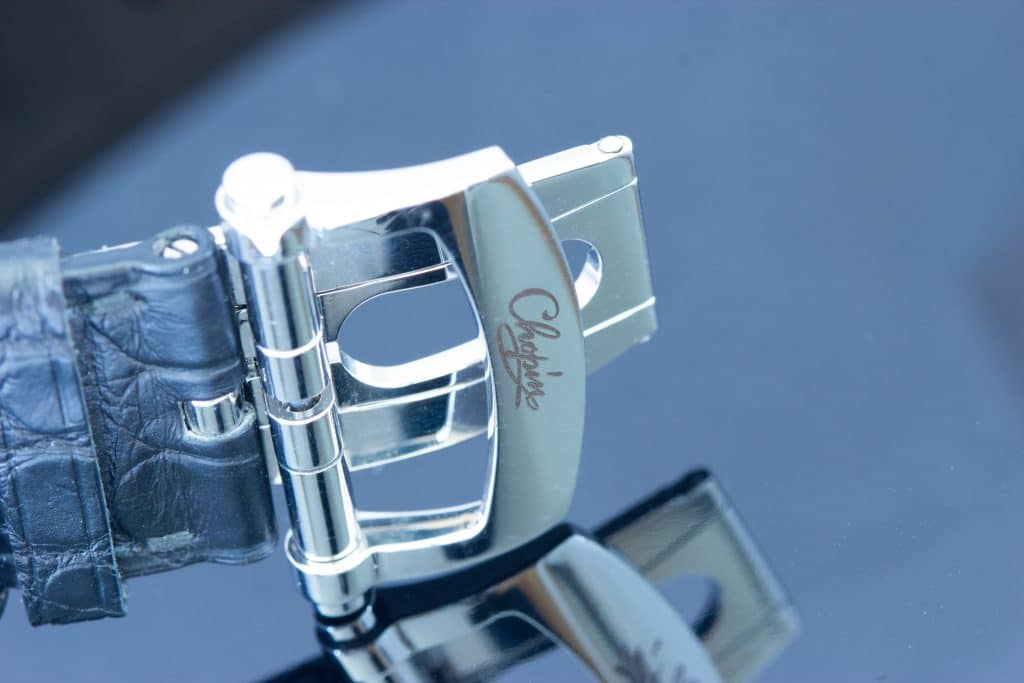 There are a couple of other nods to Chopin’s work on the dial, too. For instance, on the sub-seconds dial is the number ‘1831’, the year the Étude was published. The side edge of this sub-seconds dial is coloured red, it is made of a precious stone called carnelian and signifies the heart of Chopin which resides in a pillar of the Holy Cross church in Warsaw, while his body remains in Paris. Also, the markers on the dial are all stick markers except for 10 and 12 O’clock, which are Arabic to further hint at Chopin’s Opus 10 No.12 piece. The logo of the brand is also Frédéric Chopin’s signature. Closeup photography revealed that the marker for 11 O’clock has a portion of blue lacquer missing on it which can be seen in the photo above. 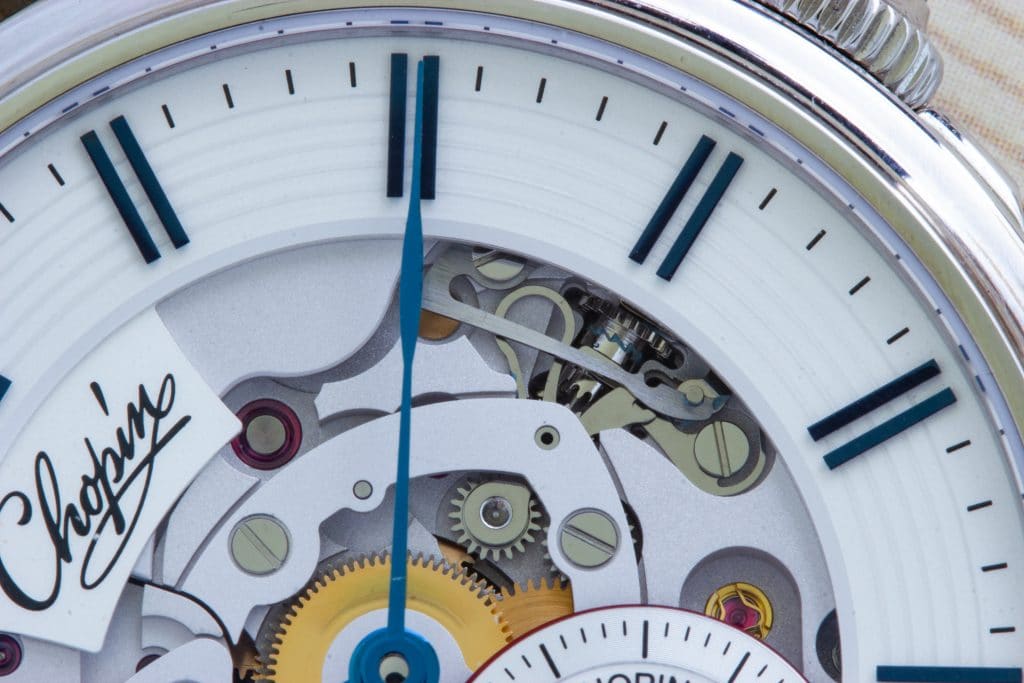 The mechanism responsible for coupling the crown to the hands is on display on the dial, a feature not often seen in watches. 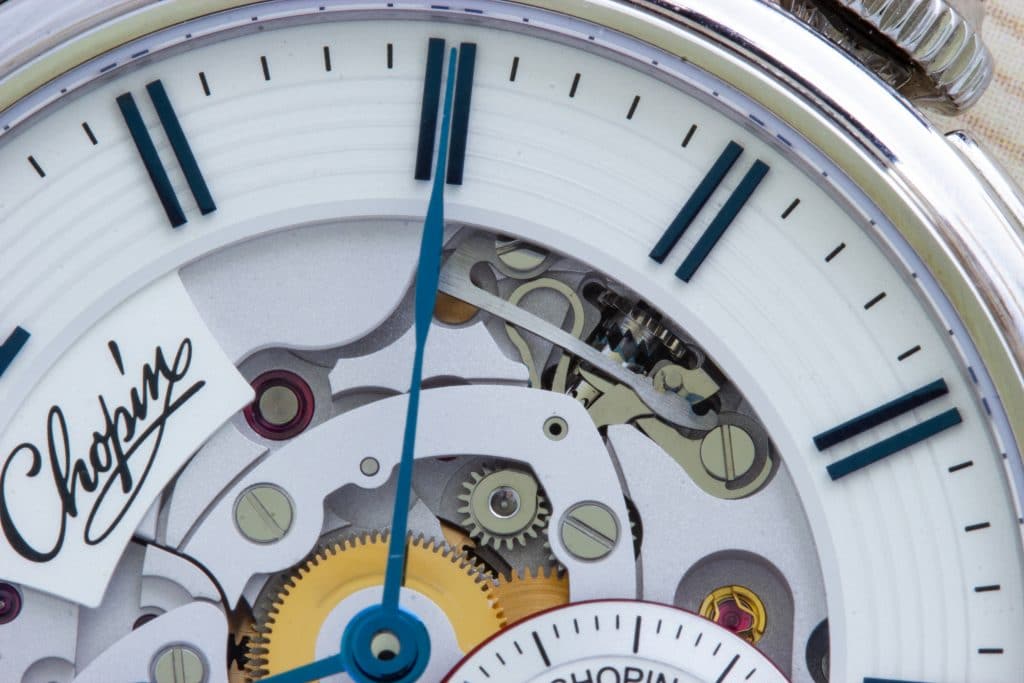 Perhaps the most interesting feature of the dial is the interplay of the different colours and finishes on show. The majority of the dial is white, with blue details such as the markers and hands, but some movement plates are visible as well with a grained finish on them. This contrasts with gears and screw heads which have been polished. Also on display is the mechanism for the crown, although you can’t see every cog, you still get an impressive view and the components have been polished up as well. 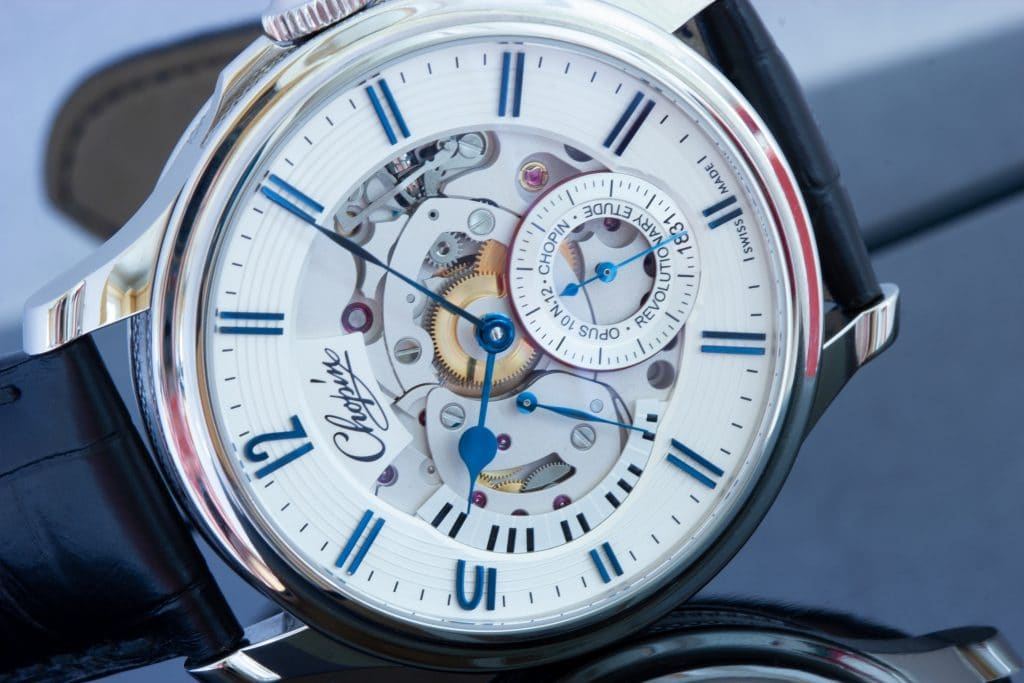 You’d think that thin, dark-coloured hands on a background like that would make this watch difficult to read, however, the hands are polished though it doesn’t show in the photos. That makes it about ten times easier to read the time as they are always glinting and changing shades between a very dark almost inky black colour to a light sky blue, depending on the angle. 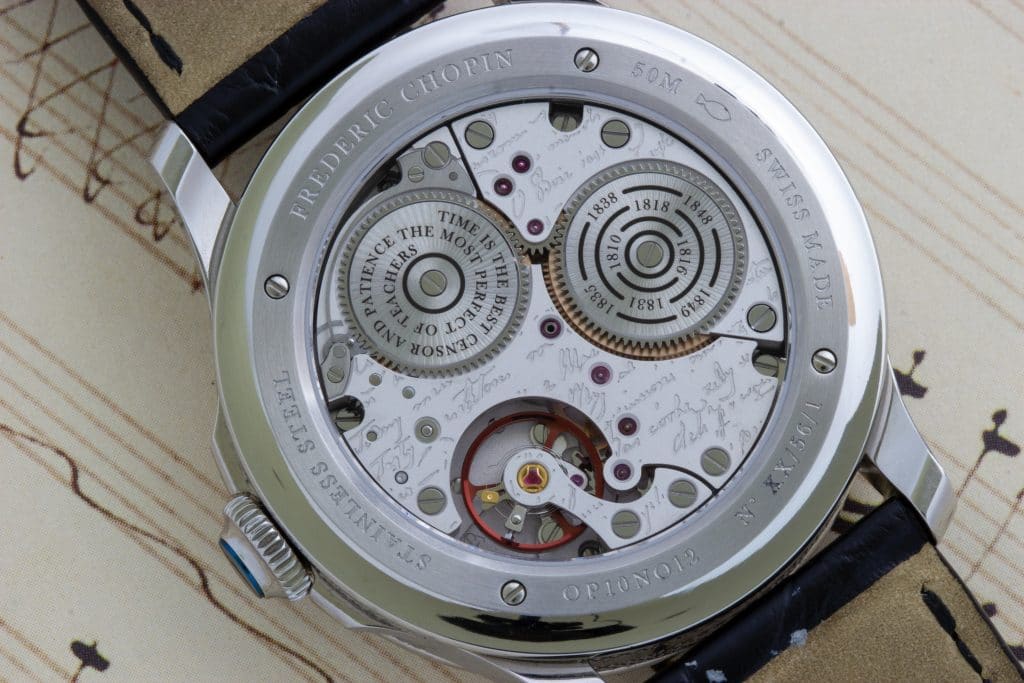 The movement is equally intriguing to view. As with the entire watch, the calibre MSE210 is not made by Chopin, but by their close friends at Schwarz-Etienne in La Chaux de Fonds. That offers the brand a few unique benefits. Schwarz-Etienne is one of the only brands that makes its own hairsprings and balance wheel assemblies, which gives them a unique creative ability. 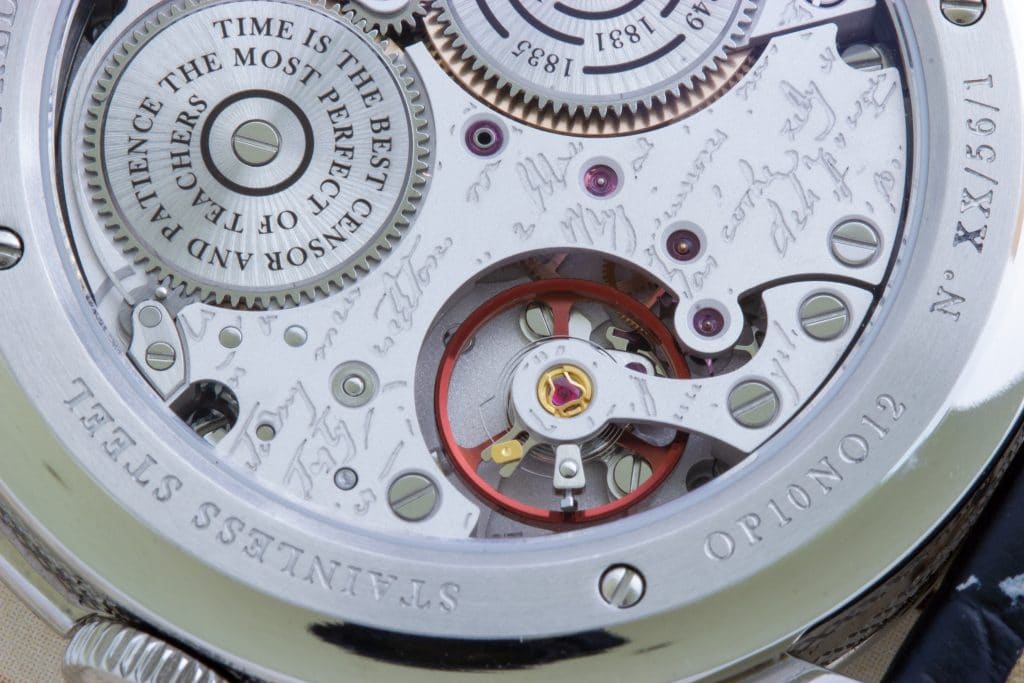 The most obvious indication that this isn’t something created by a large corporation such as Nivarox is the balance wheel, which is a glossy red colour. This, like the carnelian ring around the sub-seconds dial, indicates the composer’s beating heart, as the balance wheel is the beating heart of the watch. The development of the red balance wheel was not a simple spray paint job, it took months to develop. When changing one parameter such as colour on a piece as small and light as a balance wheel, it throws up a whole host of other issues which need to be dealt with. 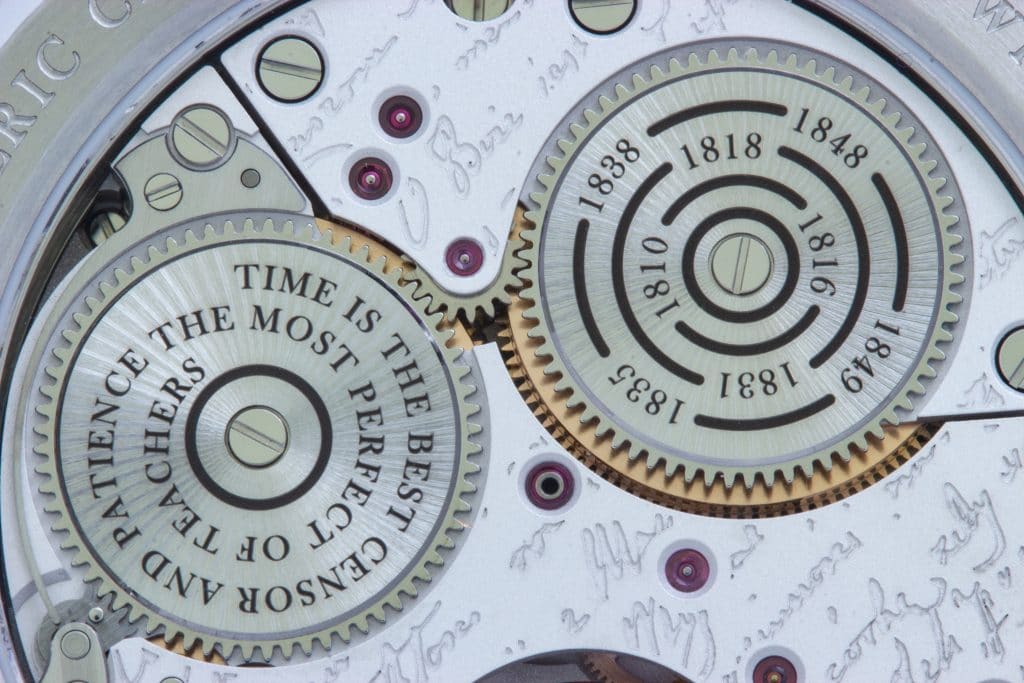 More references to Chopin can be found on top of the spring barrels. One barrel features a concentric timeline of the man’s life, with various years representing important dates from his birth to his death.

The other barrel has the phrase “Time is the best censor and patience the most perfect of teachers”, fitting for a wristwatch, really. The plates of the movement also have various scriptures of Chopin’s writing engraved on them. Due to the open dial, there isn’t actually a whole lot to see around the back, though everything is decorated very well and no surface is left untouched. Perhaps my favourite feature of the display movement is the hacking seconds of the movement. I’ve done a closeup of the arresting arm on a Grand Lange 1, but this one from Schwarz-Etienne goes a step further. It’s thick, chunky and polished, and you could almost miss it swinging out from its hiding place. 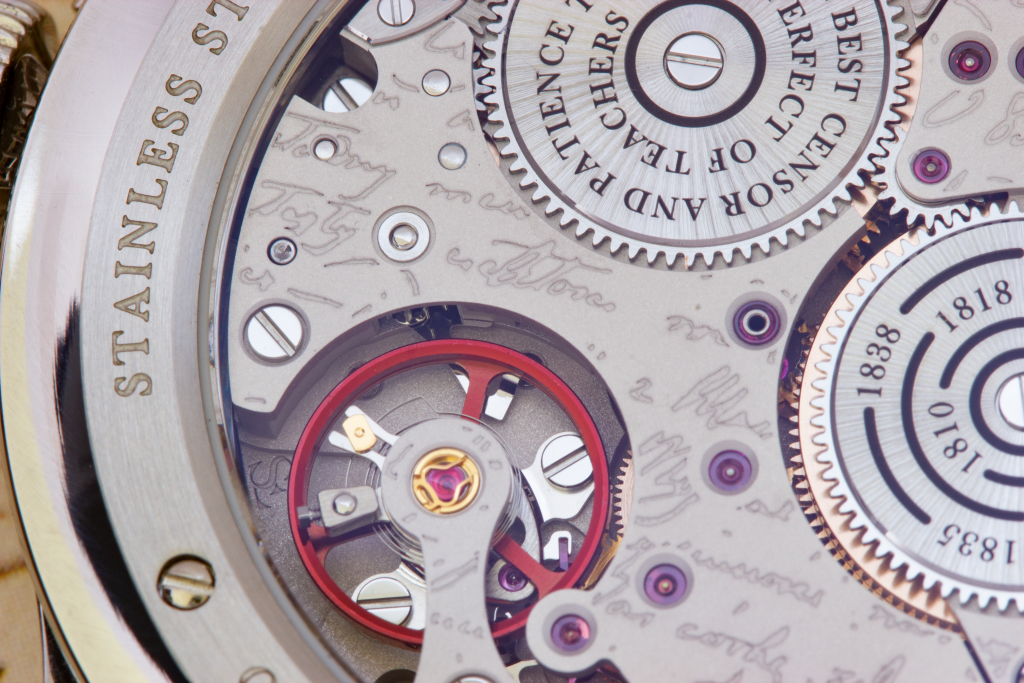 The photo above show the polished arresting arm as it catches the balance wheel to hack the seconds. Note that the Schwarz-Etienne logo is visible at this angle, too. 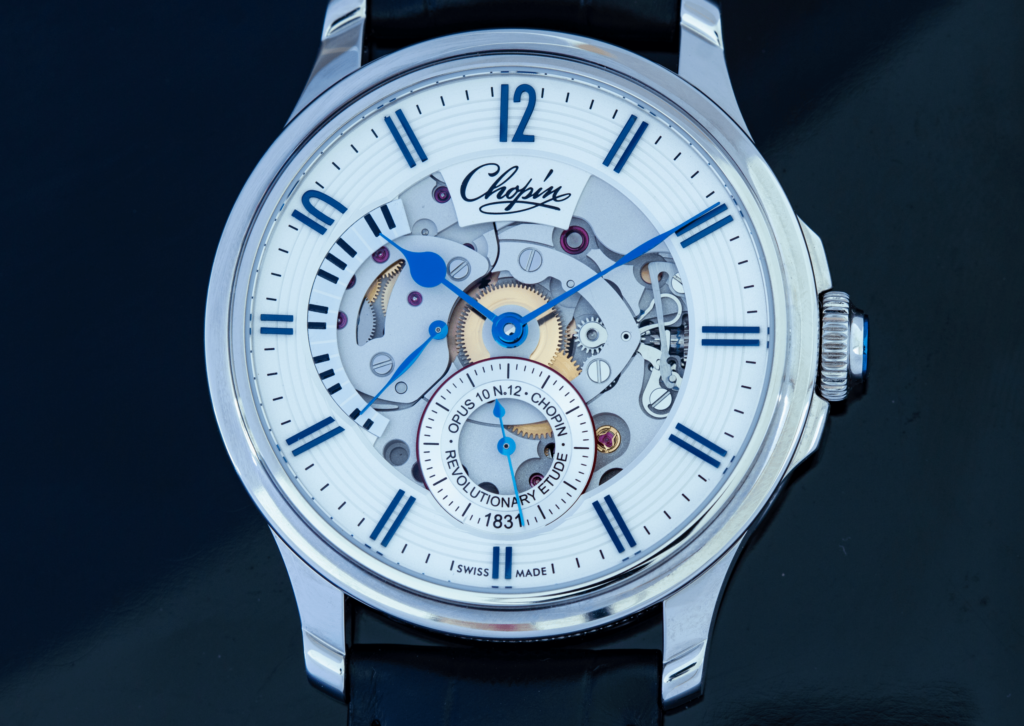 While there may not be any high level chamfering as we see from other boutique brands, that is reflected by the price which I’ll get to in a moment. The calibre MSE210 beats at a rate of 3Hz and has a power reserve of 96 hours, the large crown makes winding this watch easier, though the barrels themselves offer quite a bit of resistance when winding the crown, this may be because this is a press watch and is constantly being used.

The stainless steel case measures 43mm in diameter and offers 50 meters of water resistance, pretty much what we’d expect for a higher-end dress watch. The piano theme is more subtle here, though. The lugs are shaped like the legs of a piano and offer brushed and polished finishing to please the eye. I really liked the shape of the lugs, despite adding no real functional value they reinforce the idea that these guys are serious about Chopin and his watches. There’s also some nice knurling on the side of the case to break up the form, a clever trick to make it look thinner than it is. 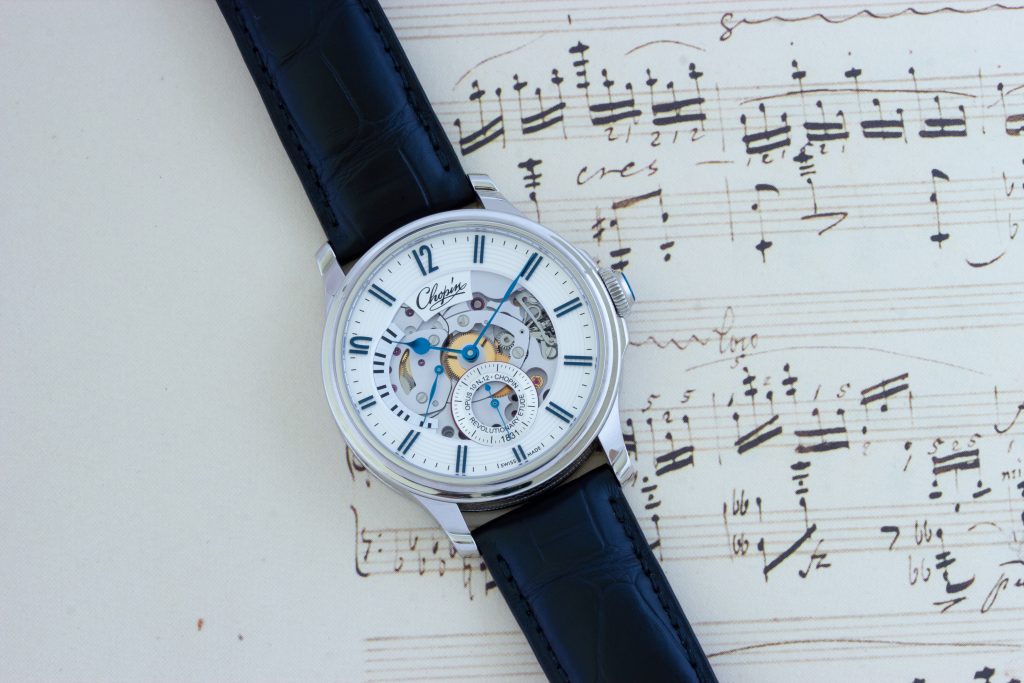 The Frédéric Chopin Institute allowed the brand to use his name under strict instruction that it was to remain exclusive. To do this, no more than 56 of these watches can be made per year without express permission from the Polish government, making this watch a rare wonder. The comfortable leather strap means it’s not an unwieldy watch, either. Whether dressing up or down, this watch takes it in its stride in the same way Frédéric Chopin took life’s challenges.

Editor’s Note: Since publishing this review, the team at Chopin Watches have been in touch with us. The watch sent to us is a prototype piece, the full production watch will have a slightly larger crown, slimmer lugs for a better fit and an extra 0.1mm width added to the carnelian stone on the sub-seconds dial. The watch was subject to a pathological inspection before being sent out, it was sent to two other destinations before reaching us and may have been subject to an impact during transport, removing some of the finish from the marker. Chopin Watches have told us they will communicate with Schwarz-Etienne and will extensively review the process used to blue the markers before production begins.