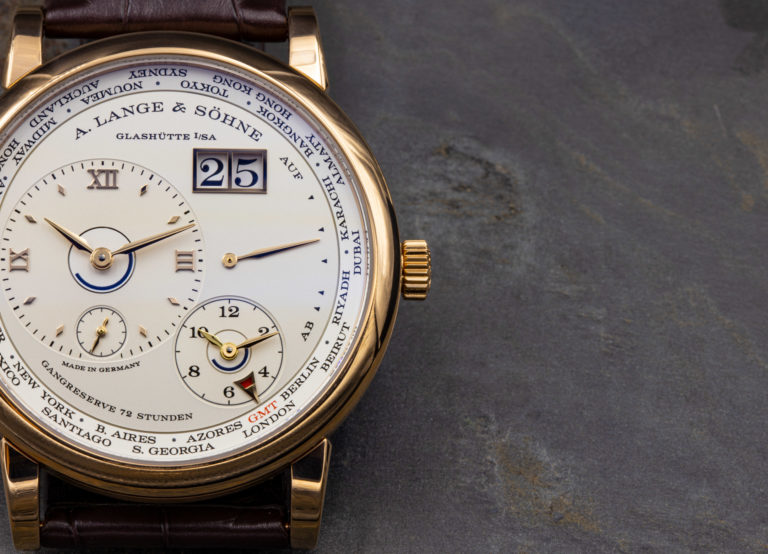 In 2016 we got to go on a tour of the A. Lange & Söhne manufactory. A part of that tour was spending some time in the building which housed the original workshops in Glashütte. It’s an office space now, and a place to meet and interview staff (this is where we met Product Direct Anthony de Haas). We also got to spend time in a room full of watches for us to try out, and there were watches from every product range there from the Double Split to the Richard Lange Perpetual Terraluna to the simple Saxonia Thin. I took photos of a lot of them, but while I was doing that I was wearing one of their watches: the old Lange 1 Timezone. It fitted my wrist so well and was comfortable too. The dial was elegant and well thought out. It was close to the perfect watch, so imagine how I felt when I saw this new one for the first time.

Anxious. That’s how I felt. I wasn’t sure about it when I first saw the press photos. But, we know that press photos don’t convey everything about a watch; you need some real hands-on images to get a better sense of a timepiece. When the opportunity to go hands-on with the new piece arose, I made sure to clear my calendar for it. 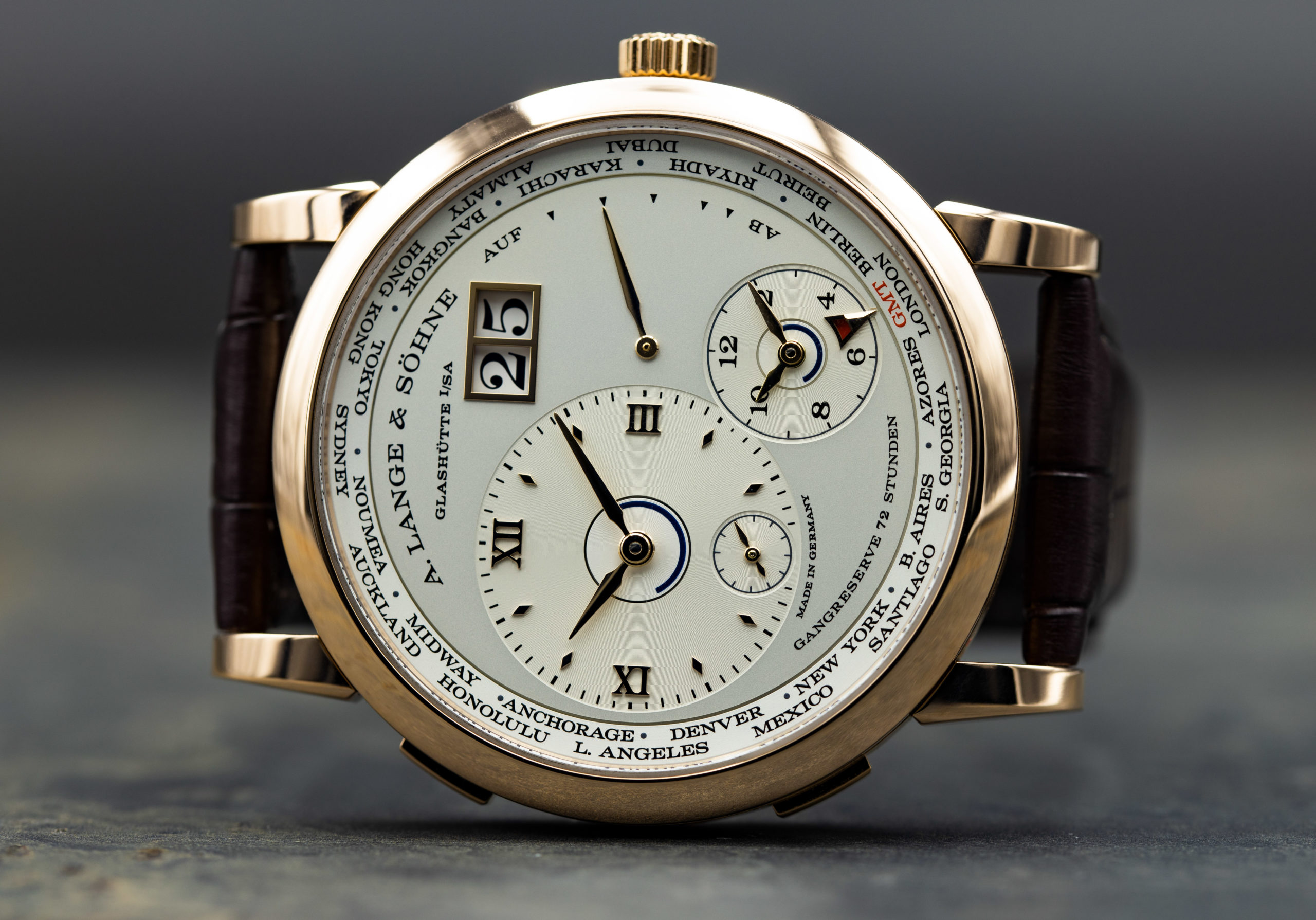 The watch measures in at 41.9mm in diameter and 10.9mm in thickness, which puts it in the middle ground of the watch category it aims to compete with. While I’m sure the fine folks at A. Lange & Söhne will say that their watch is in a class of its own (and it kind of is), it should be noted that for a watch with this complication at this price point there is some competition. For example, Patek Philippe’s 5230 world-time. A Traditional world-time watch displaying all 24 timezones simultaneously, that watch has a 38.5mm case but is more affordable than the Lange 1 Timezone. The other alternative could be the Classique Hora Mundi 5717 from Breguet. That watch features a unique setup which allows you to switch between two timezones with the push of a button. The Hora Mundi is bigger than the Lange 1 Timezone, measuring at 43mm in diameter, it’s also more expensive. 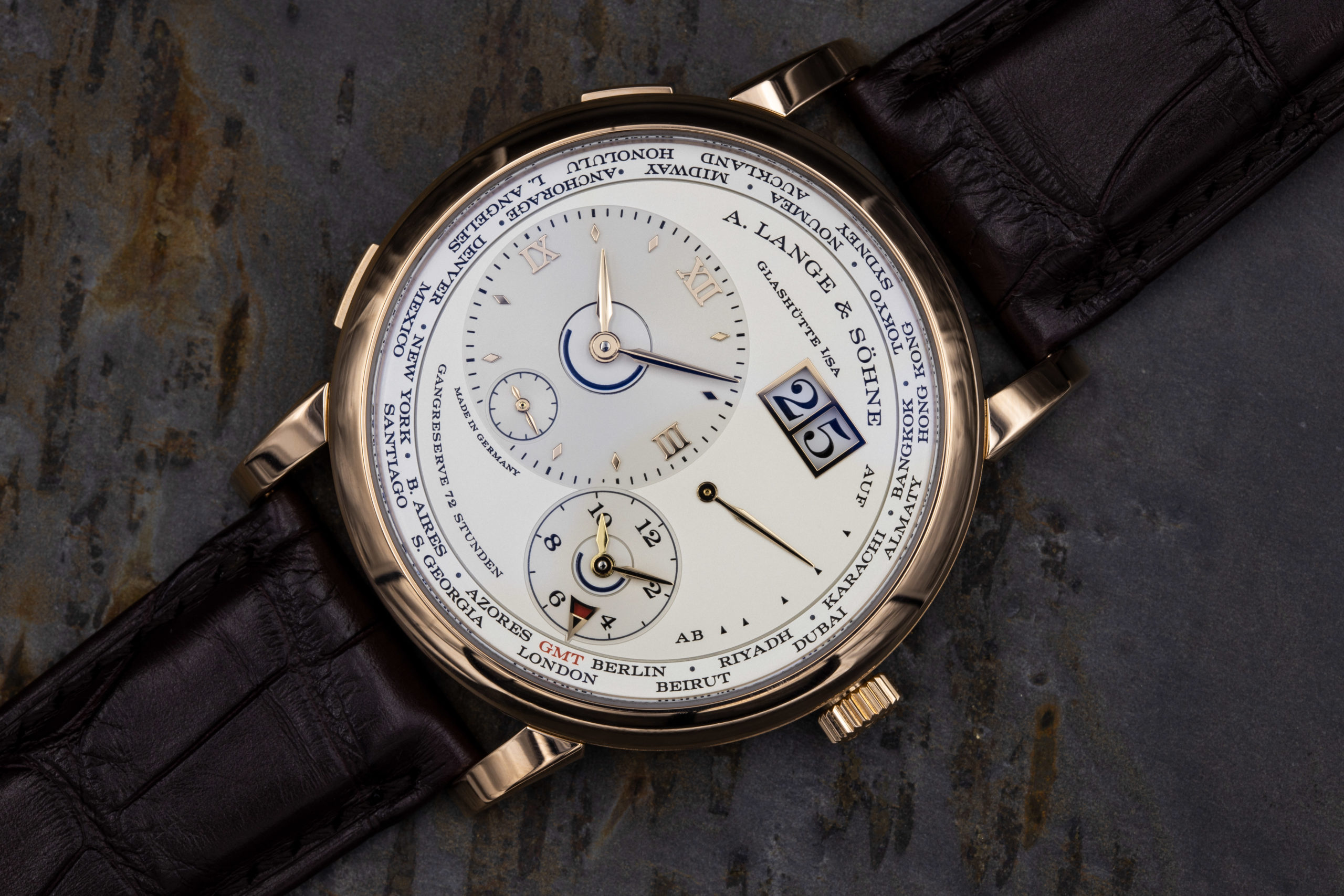 To use the same cliché I always use when writing about my hands-on experience with watches from A. Lange & Söhne, the watch felt extremely solid, robust and German. The word German isn’t an adjective in any sense, but it often becomes one when describing a German-made product. Watch a few episodes of the old-school Top Gear with Clarkson, Hammond & May, and you’ll probably find them waxing lyrical about how solid and powerful an AMG Mercedes-Benz feels, or how precise a BMW M car is. They’re not just doing that for the TV appeal, either, stepping into any BMW in the range these days feels like climbing the social ladder, even their smallest cars feel like they’ve been made with more care than their more affordable European and Japanese counterparts, but I digress. 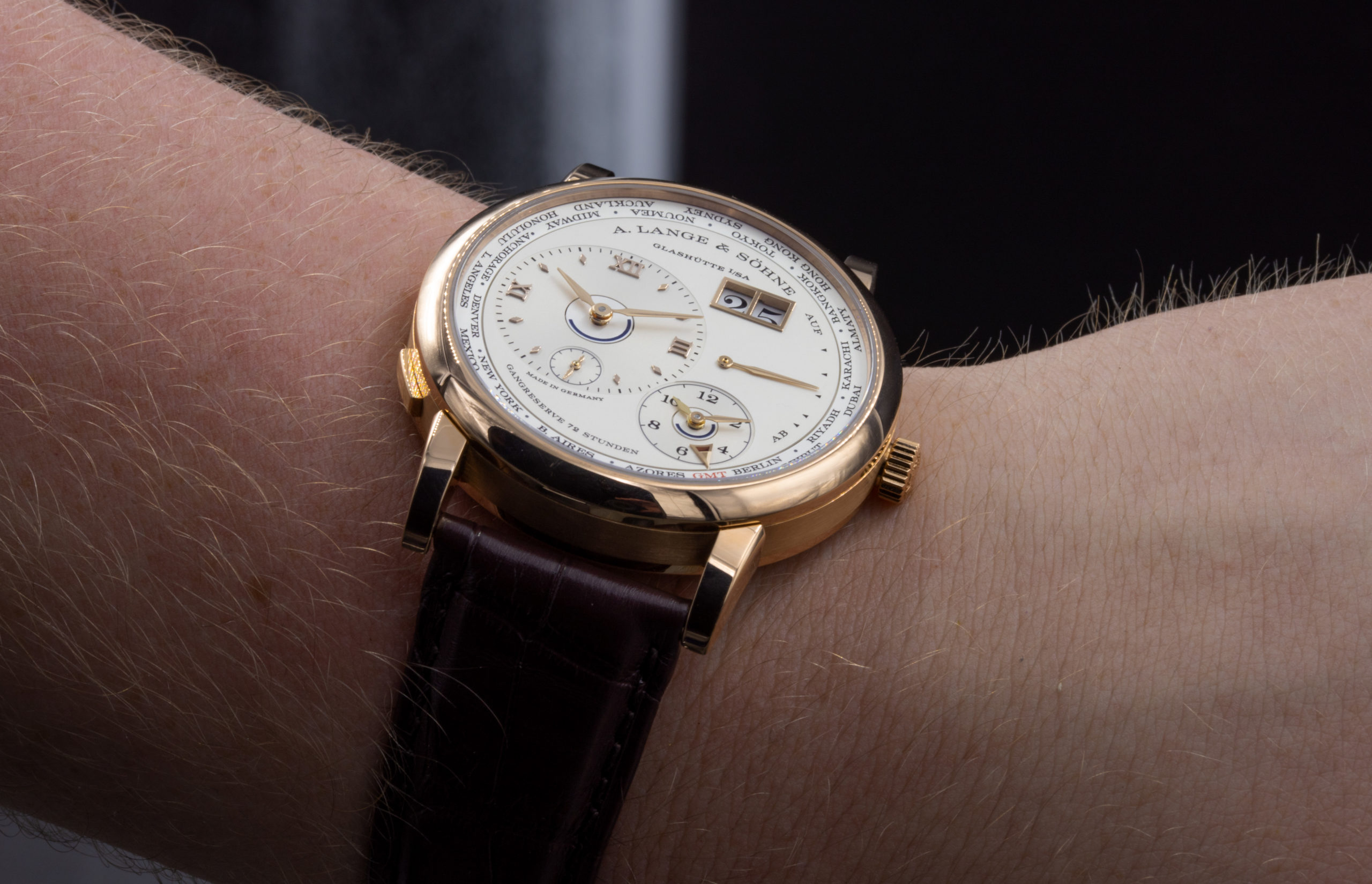 The watch in hand feels heavier than the 111-gram reading from our VSS (Very Scientific (Kitchen) Scales) lets on. This makes it 32 grams lighter than our reference timepiece, the Rolex GMT Master 2 126710 BLNR and 43 grams lighter than the Odysseus I had a go with back in February. Those watches are steel, though, and come on a steel bracelet. If the Lange 1 Timezone were to be presented on a rose gold bracelet (like some of the older Lange 1s had), it would probably break into the 200-gram category. Despite being relatively easy to scratch, the gold in the case is still very dense and coupled with a rose gold pin-buckle it makes for a reassuring watch to wear. You know where your money went with this one, you can feel it in your hands. 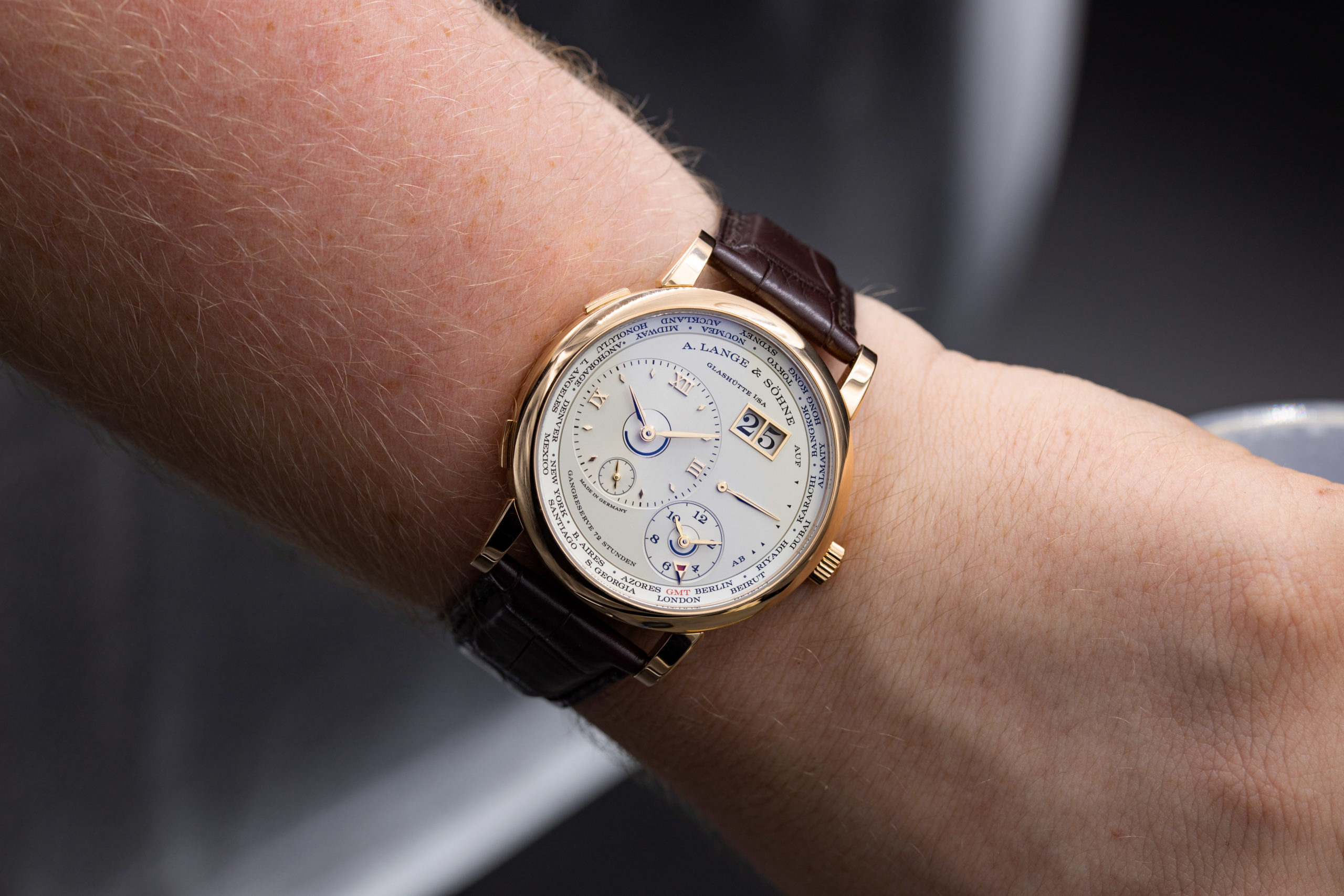 The pushers feel precise, they require a little force (especially the city ring), but it does feel like you’re moving gears in there which is a nice feeling. The only tricky part I found was decoupling the time dials (more on that later), you have to push the city ring in so far without clicking it forwards to set the hours of the second timezone separately, and it’s really easy to overdo it and have to start all over again. It’s a very small point, and I only had to do it once (the watch came set up for Berlin time, to get the city ring dial set up correctly on GMT I had to decouple the dials). It would be easier to put this decoupling feature in the crown, so it pulls out to a third position. 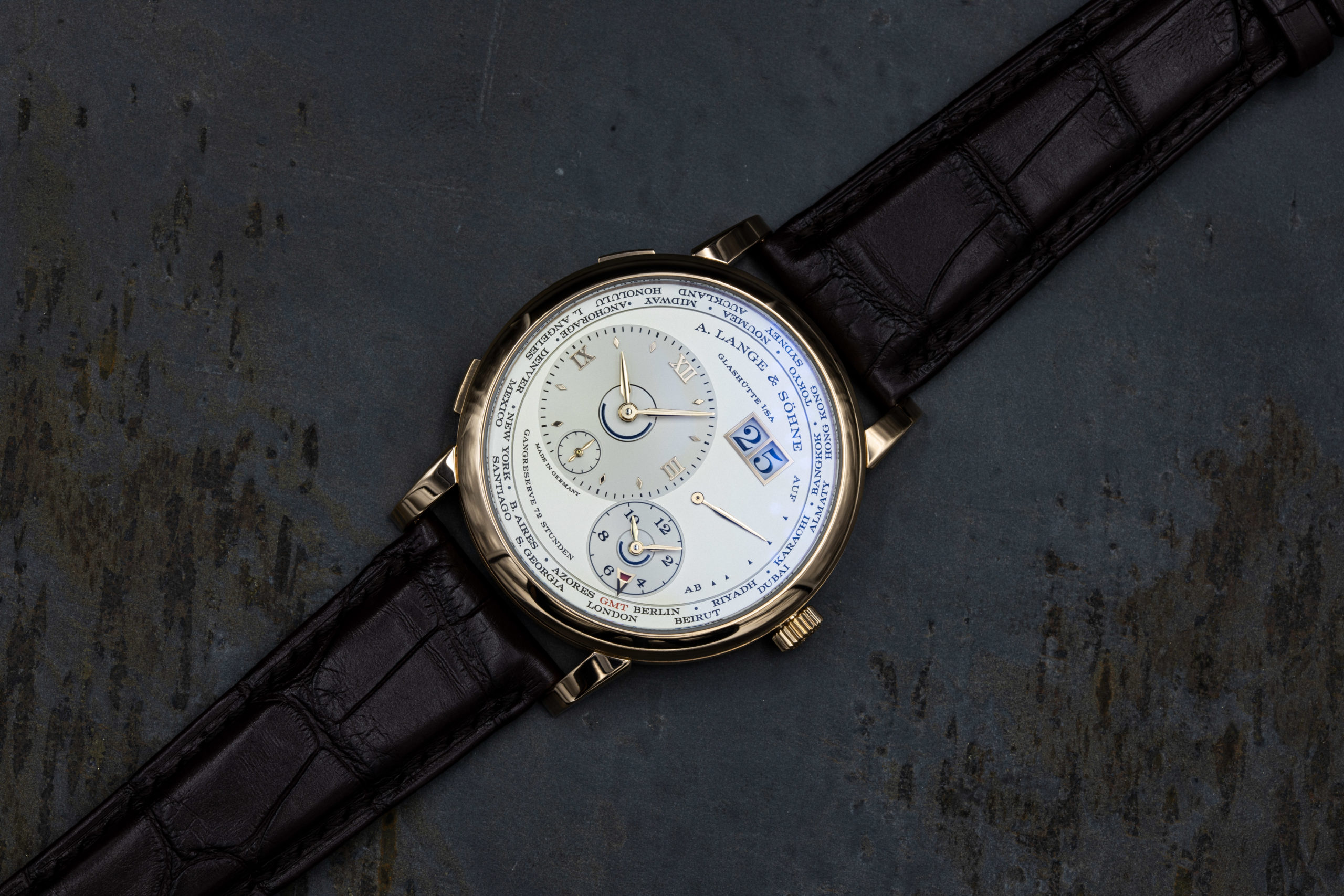 For me, the tangible feel of the piece is the most important part, knowing where my €48,000 went is extremely important, more important than whether the watch will still be worth that much in the future. Maybe I’m a simpleton for living in the here and now when it comes to watches?

Although I like to focus on the things I can feel with my hands, it always pays to take a loupe to the things that are trapped behind sapphire crystal. You’d be forgiven for thinking that A. Lange & Söhne hasn’t changed much in the calibre L141.1, it looks the same as all the other Lange 1 movements after all. While it’s not had a completely revolutionary upgrade, there are still some changes worth noting. 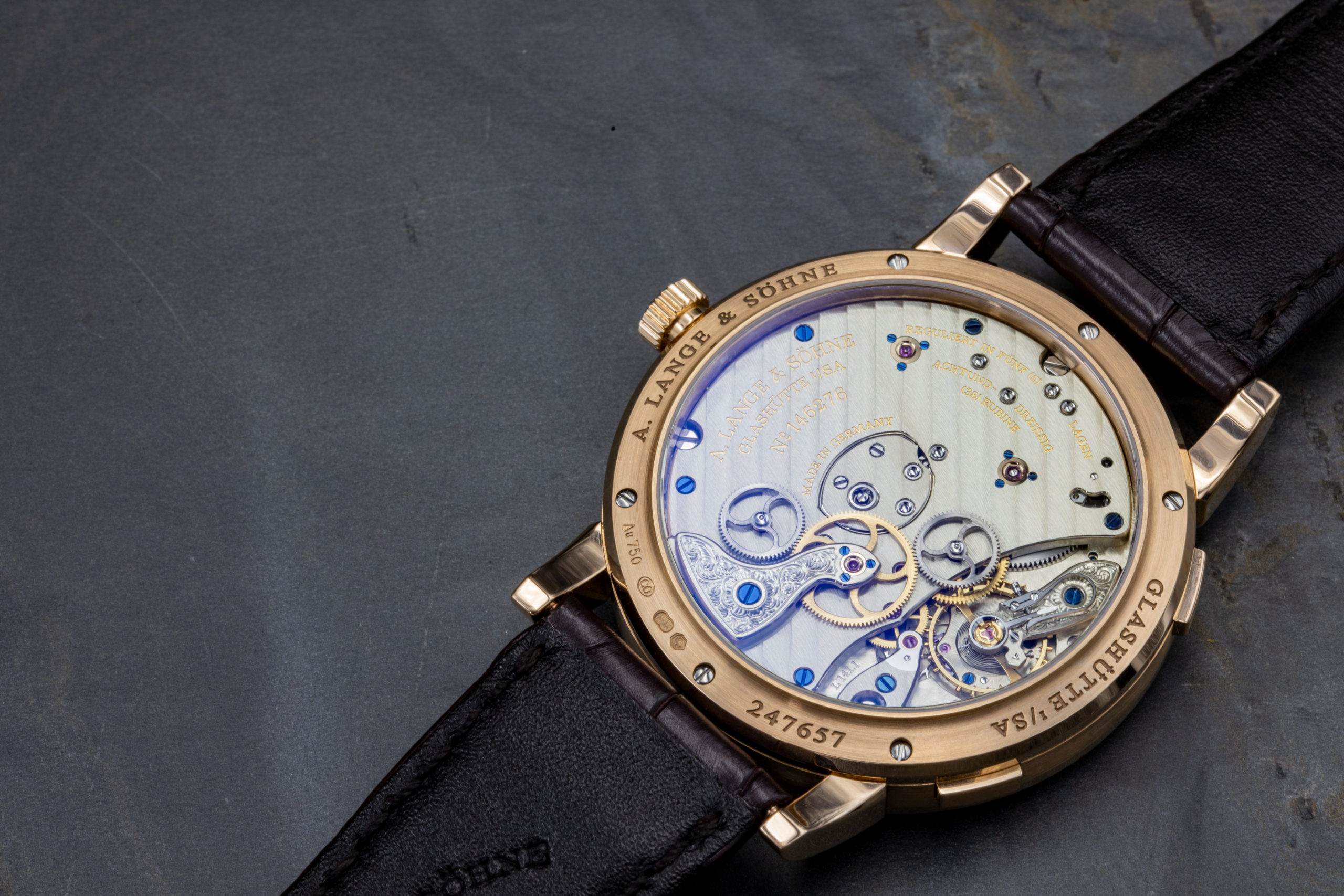 First of all, updates of spring technologies and efficiency mean that the new calibre L141.1 retains the 72-hour power reserve of the outgoing calibre L031.1, but it only has one mainspring rather than two. You’ll see on the old model that the word Doppelfederhaus – double spring house – was printed on the dial, whereas now it says Gangreserve 72 Stunden which means ‘Power reserve (of) 72 hours’. A. Lange & Söhne has also started producing its hairsprings in-house as well, so while the old L031.1 used a Nivarox hairspring, the new L141.1 uses an in-house made spring, it’s a little detail in reality, but it means a lot for a watchmaker to produce their own hairsprings. 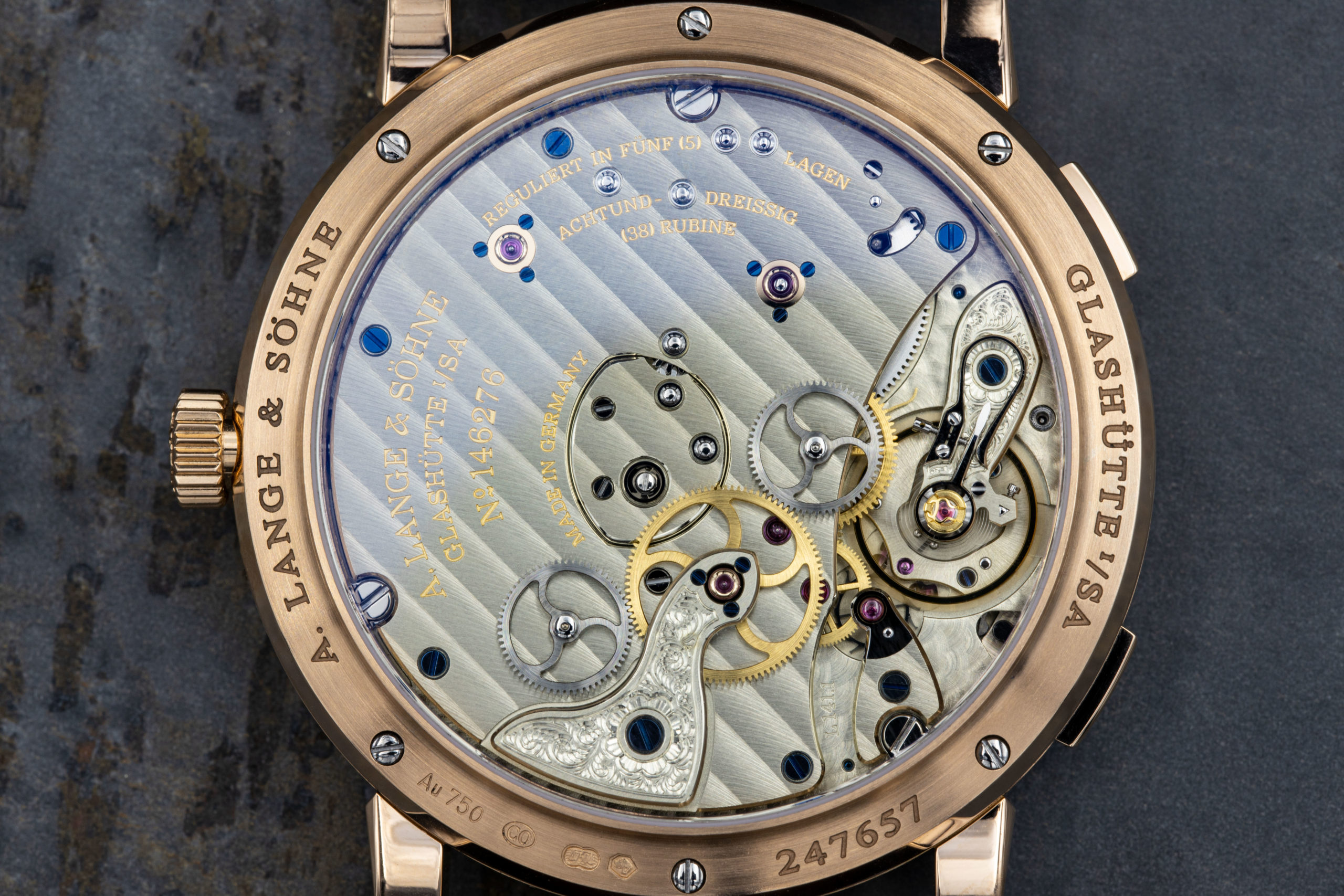 The watch also has a new indication which has been implemented into the second timezone subdial. Inside the arrow is a window that turns red or white, depending on whether the indicated timezone uses daylight saving. The watch can’t adjust itself for that, but it is nice that it tells you that you may need to change it according to the timezone you’ve just arrived in. Despite being a small window, it was legible when on the wrist, as there are only two possible colours, it could be it was easy to tell the difference. 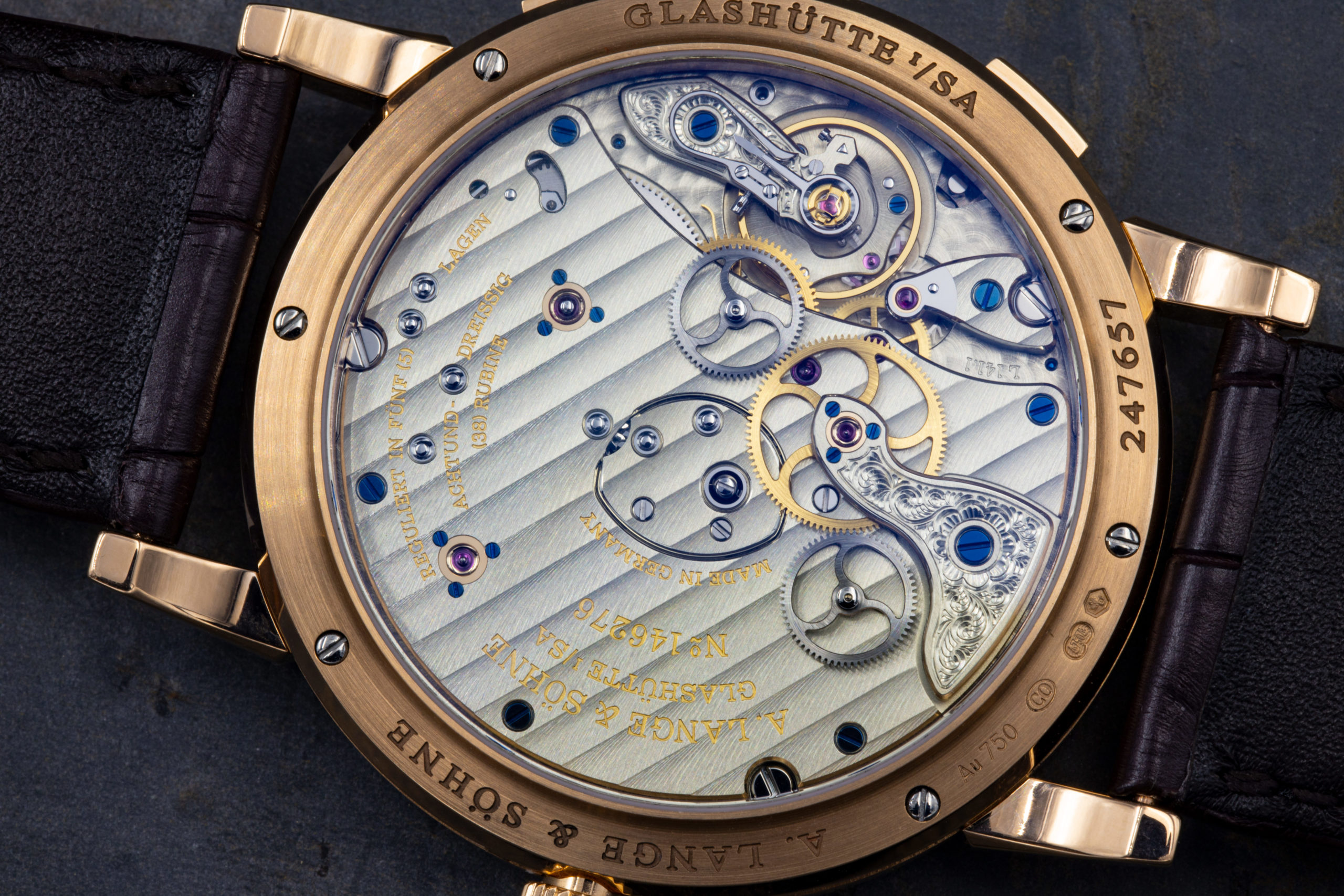 The movement retains the 3Hz oscillation rate of the outgoing model, as well as the high level of finishing. A. Lange & Söhne applies the same level of detailing to all of its watches, no matter how expensive they are. The balance cock has been engraved by hand, along with the cock for the exposed wheels that connect the second timezone to the first. The patterns carved into the two cocks are unique to the artisan that engraved them, and everyone in the small engraving department has their own theme which they meticulously apply. The three-quarter baseplate (a Glashütte tradition) has also been finished with precision and features Glashütte stripes as the main eye-catcher. The edges have been polished to remove signs of machining, and a couple of the jewels are sat in polished gold chatons, a throwback to old-school watchmaking where chatons were the only way to hold a jewel in place. There’s even a cutout to view the top of the click (the ratchet that stops the watch unwinding when using the crown), and it’s been given the same level of attention as every other piece. You’ll also find heat-blued screws dotted about the place, while they aren’t necessary to the overall function of the timepiece, their addition shows the extra steps the folks at A. Lange & Söhne take when making a watch. 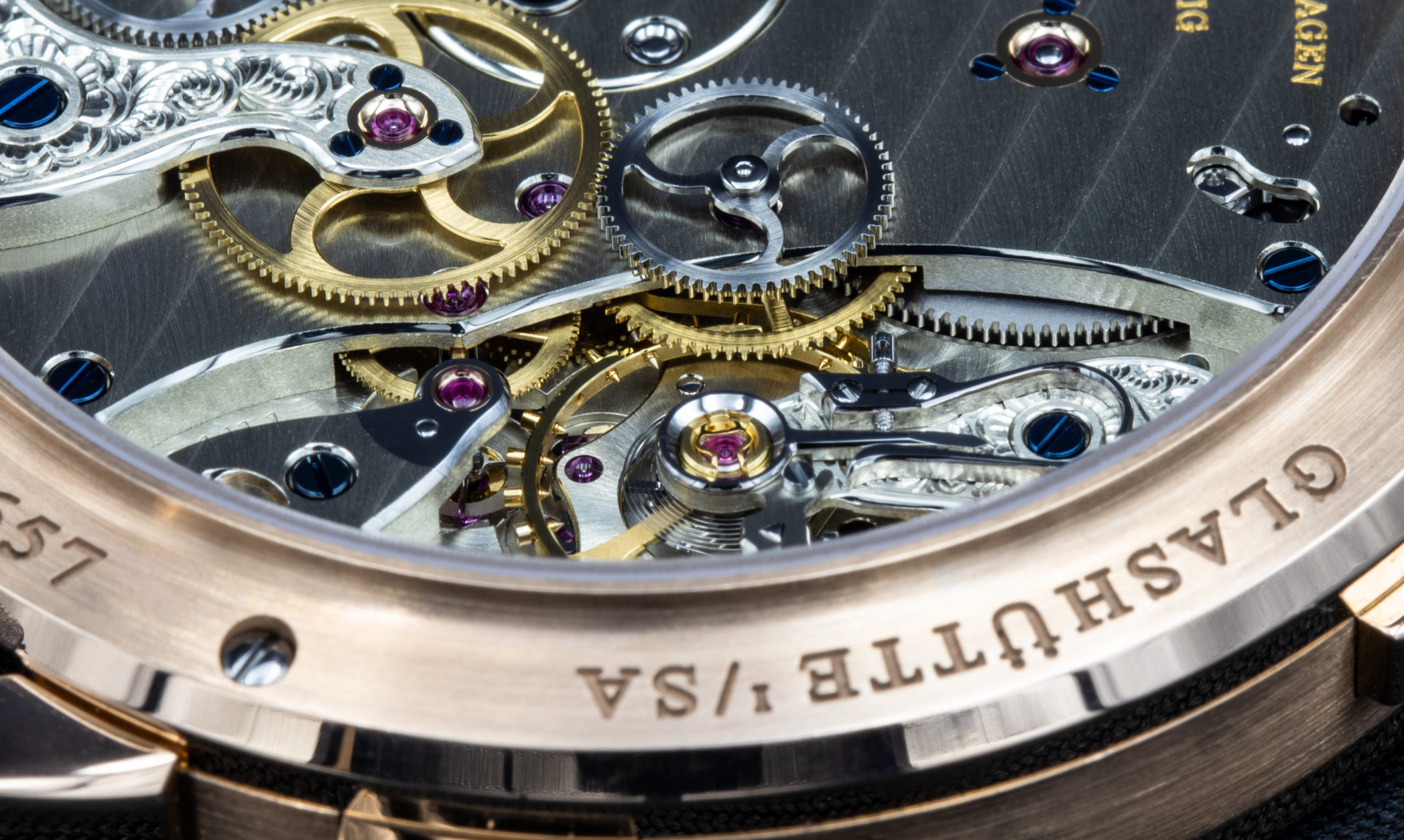 The movement may have been remade from the ground up, but its appearance is still quite similar to the old model. Both calibres have the same 34.1mm diameter, but the new movement is flatter and looks larger when viewed through the caseback.

The dial is where most changes have occurred. It still features the A. Lange & Söhne typeface, the Outsize Date, the Up/Down power reserve and the city ring around the edge, but a couple of things have changed. As well as the replacement of the Doppelfederhaus text, the day/night indicators have been moved inside the time dials. Before, they were an arrow sat on a rotating disc, now though they encompass the pinion the hands sit on and perform one rotation per 24 hours. When the hour hand goes across the blue semicircular line, the watch is indicating that it’s night time. Though, of course, if you look out the window, you can tell it’s night time. 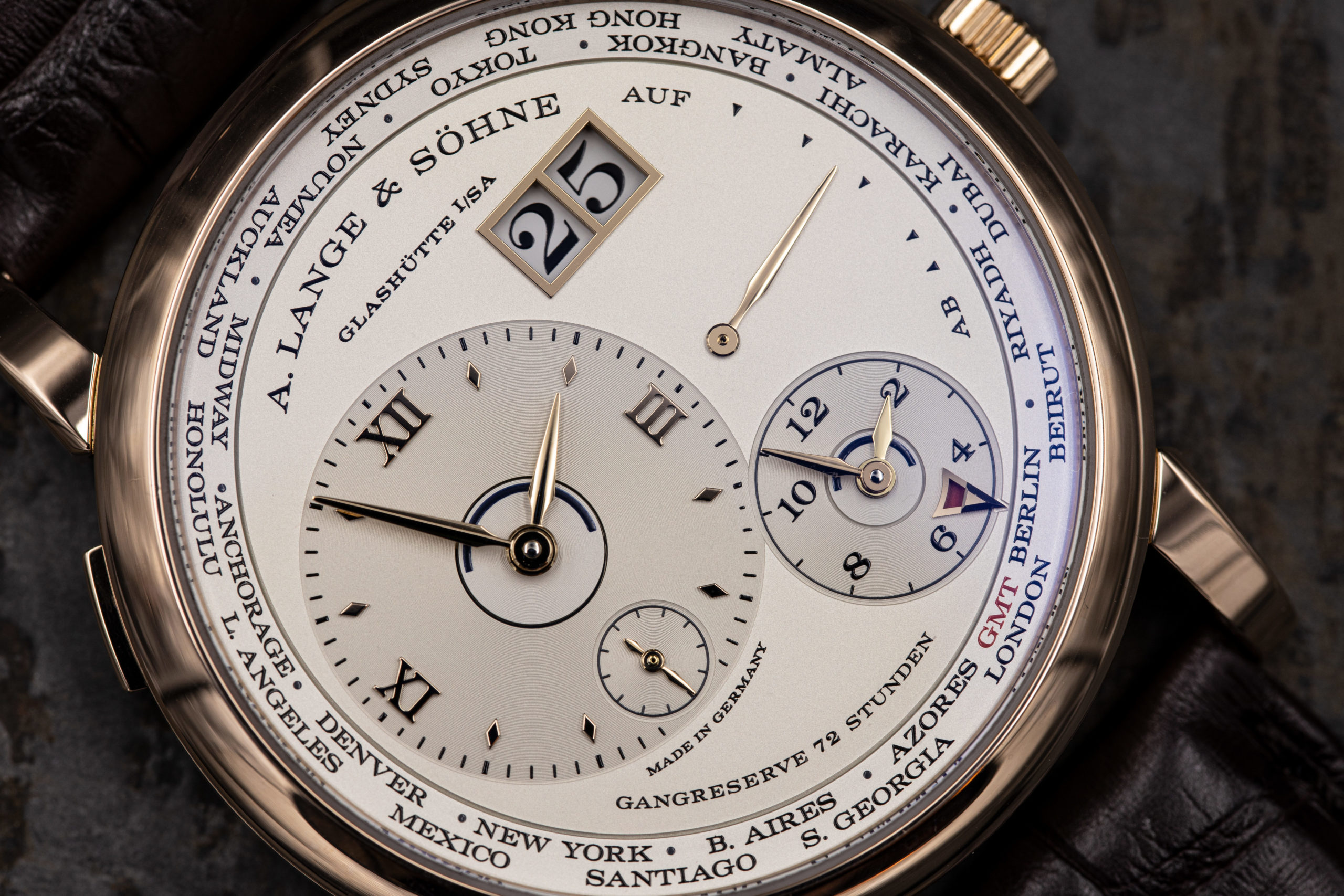 The dial is laid out in the classic A. Lange & Söhne way, with all the different elements spaced out in such a manner that they are subconsciously pleasing to look at. For an in-depth explanation, read my Fortnight Review of the Grand Lange 1. The same principles apply here, the centre of the larger time dial, the centre of the Outsize Date and the centre of the away dial all join together to form a triangle which has perfect proportions (the ‘Golden Triangle’). Because of how our brains process and interpret their surroundings, this shape always seems correct to us, even if we ourselves don’t entirely know why and can’t really explain it. 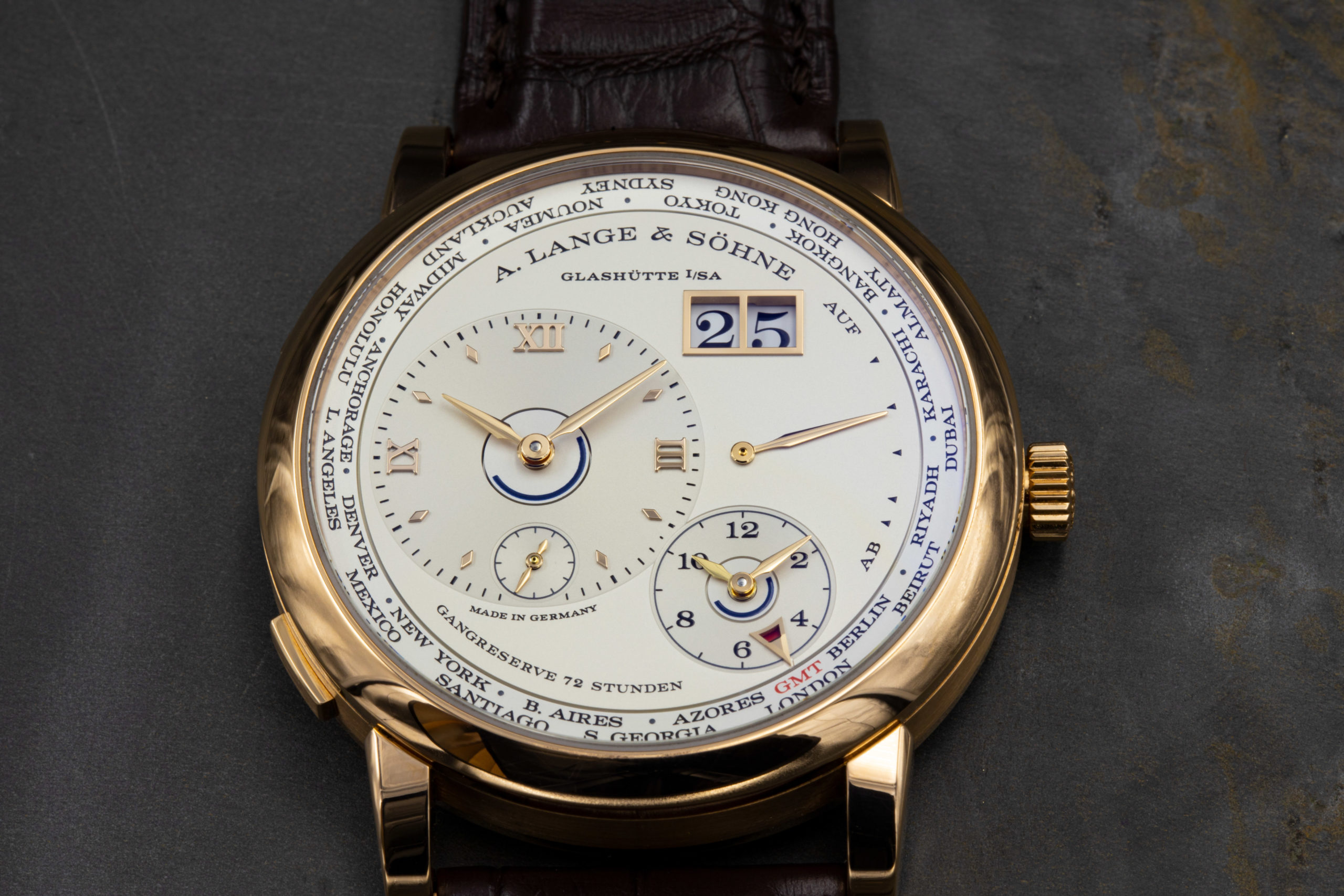 The lancet hands common on watches from the Saxon brand make an appearance here, made of rose gold, so they match the case and provide contrast to the silver argenté dial. While the main dial itself has a subtle matte-style finish to it, the time dials have had concentric circles engraved onto them to break it all up a little. 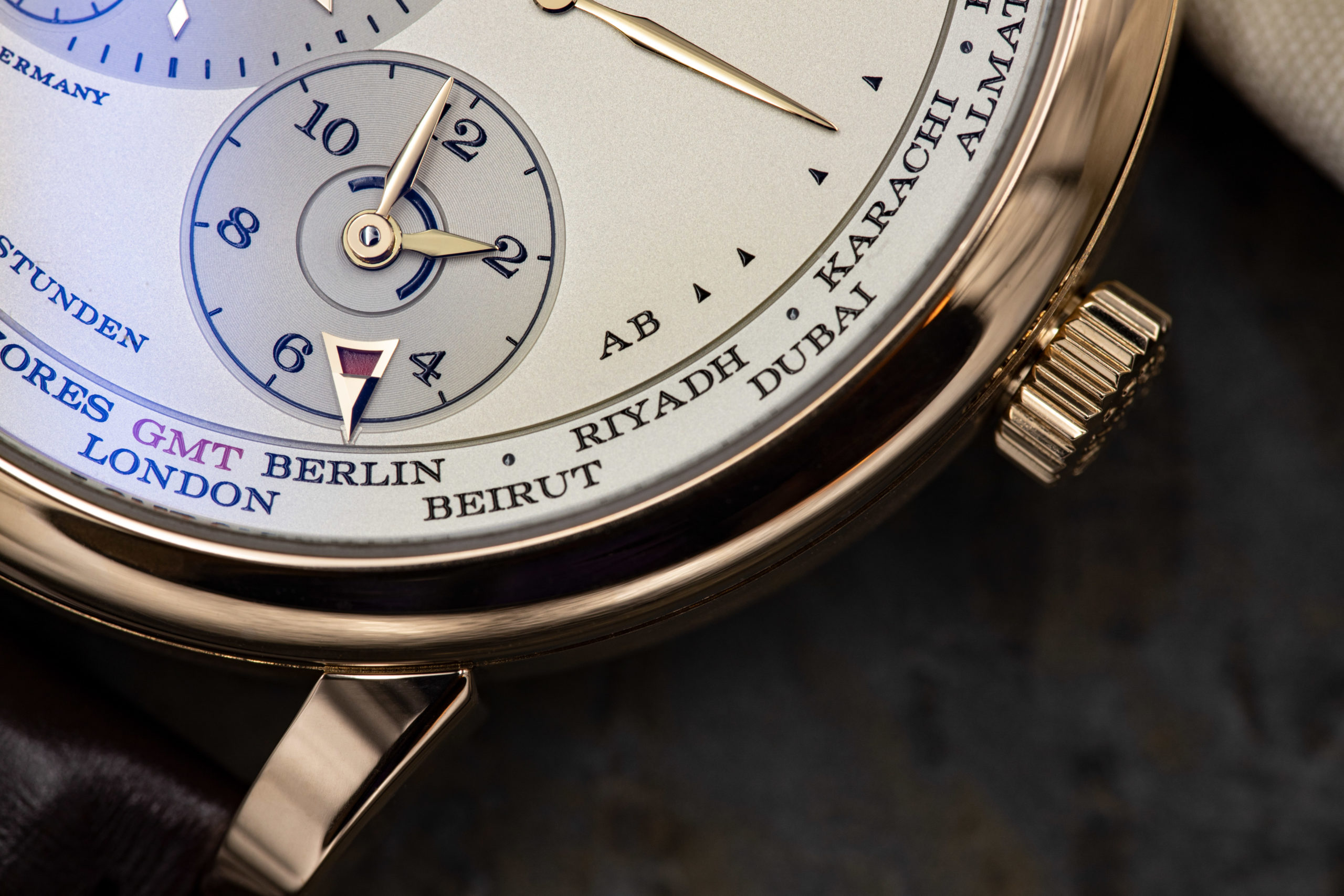 Reading the time is very easy, although there is no lume on the watch at all. When staying put at the home timezone, both dials display the same time, which I think is visually appealing. When you travel abroad, depress the lower pusher to advance the hand on the smaller dial forwards by one hour, this will move the day/night indicator as well. It’s then simply a matter of advancing the hour ring forwards until you hit the city of your choice, all very easy stuff. Winding the watch is easy as well, there’s no screw-down crown, so you don’t need to unscrew it to wind the watch.

This is a classical dress watch with complications done in the right way. Instead of being confusing for the sake of ‘heritage’ that I find a lot of Swiss manufacturers are doing, A. Lange & Söhne has taken extra steps to simplify the world-time watch. The updates to the watch have been successful as they bring it into line with the Saxon brand’s new releases (let’s face it, this needed an update as it was launched in 2005 and not really updated since), and it looks contemporary. The fact that they launched the redesigned piece not long after they unveiled a limited-edition 25th-anniversary edition of the Lange 1 Timezone using the old model should bode well for the secondary market prices of that piece too.