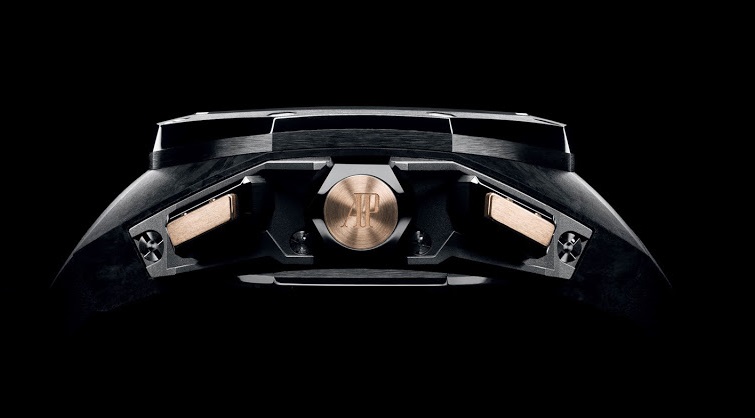 The year was 2010 when Michael Schumacher posed a most curious question to the white coats at Audemars Piguet. What was that question you might ask? Would it be possible to create a mechanical wristwatch designed specifically for use in motorsport which would make it possible to measure and record an extended series of consecutive lap times?

And from there the idea was borne and the challenge accepted by the engineers at AP. 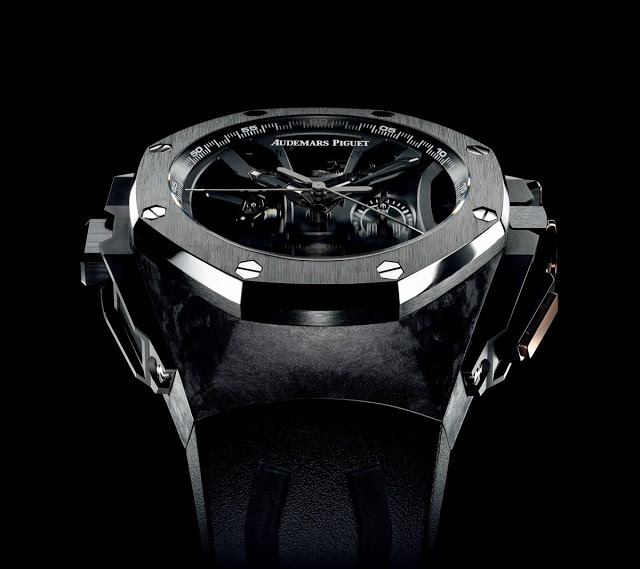 It was a challenge that had never been achieved in the world of haute horology and one that inspired everyone at Audemars Piguet to create a wristwatch that could achieve this most simplest of requests. Before this time, consecutive lap times were measured using a bank of two or more stop watches arranged in a series, which may seem archaic in our age but it was the only way to do this simplest of tasks in motorsports. However, it is with great delight that we introduce the new motorsport-specific timepiece that features two angular indexing systems on the one chronograph, each with an independent memory making it possible to perform this specific tast. It is also the very first time that a movement has been developed entirely from scratch at the behest of an ambassador. However, before we get too carried away let’s get to the good stuff, the watch itself! 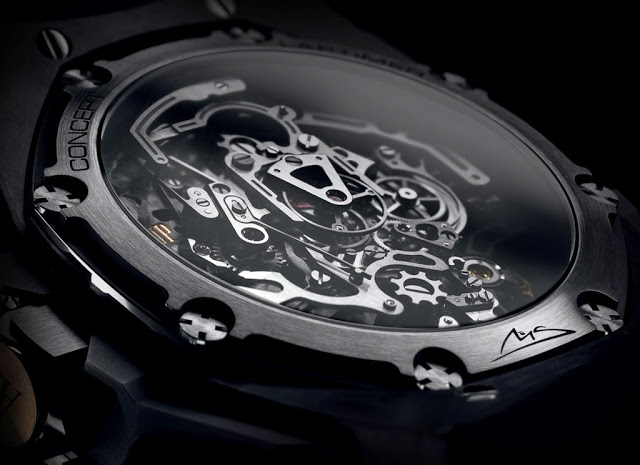 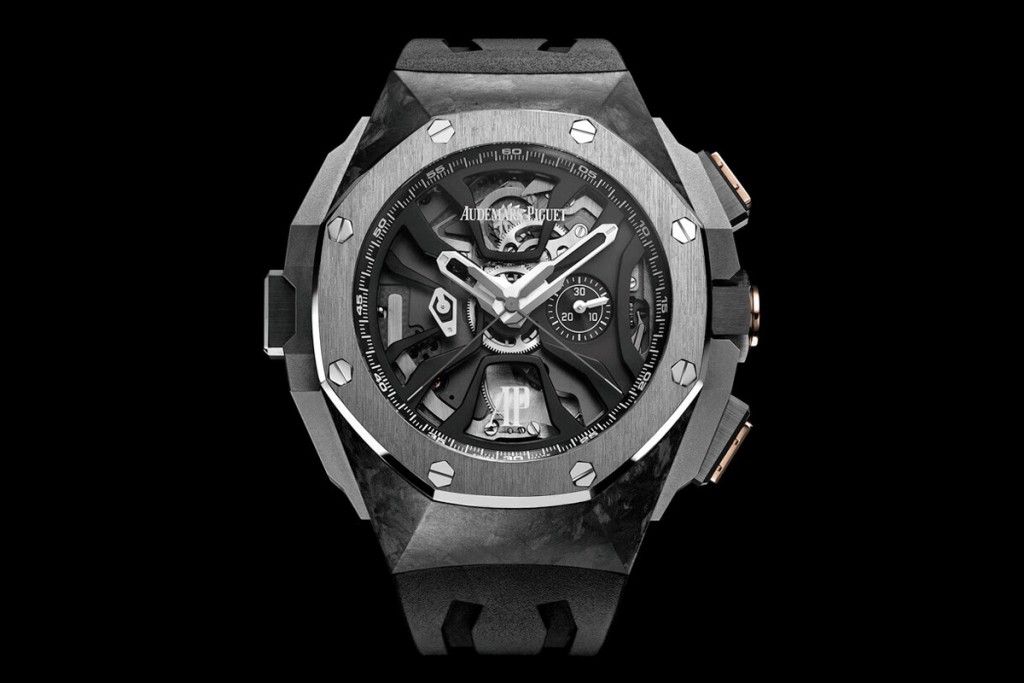 Tucked underneith the sapphire crystal is a beautiful openworked black dial with a 30 minute counter at 3 o’clock, small seconds counter at 9 o’clock, white gold Royal Oak hands with luminescent coating and a black inner bezel. The way the timepiece functions however isn’t quite evident when you look at the dial so let’s explain it a little further since it is the standout feature of this beauty. 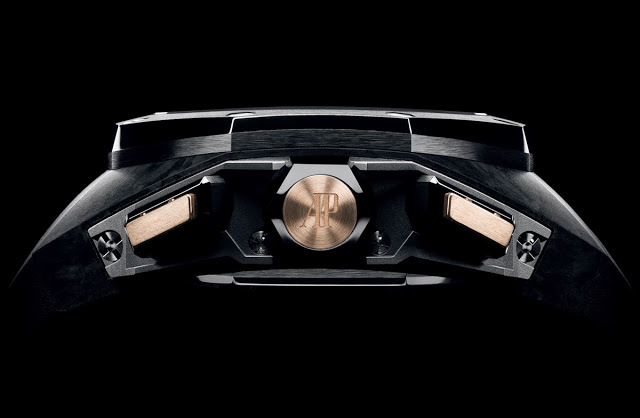 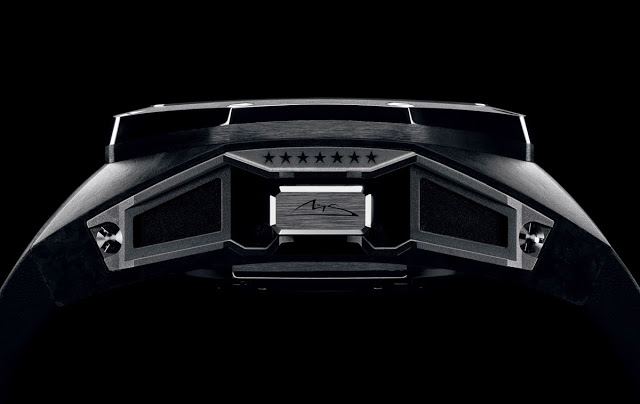 This third pushpiece makes it possible to simultaneously stop either of the two chronograph hands, while returning the other hand to zero and restarting it – meaning that, while the time of the most recent lap is being noted down, timing of the next lap is already underway. The watch therefore negates the need for two or more hand-held timing devices, streamlining the operation within a single wrist chronograph. Alternatively, the watch can keep a certain lap time as reference, stopping one hand with the laptimer button, and using the flyback function on the other chronograph hand with the pusher at 4 o’clock to restart the measurement of each new lap. Finally, the timepiece can be used as a “standard” flyback chronograph with both hands running together in parallel.
This is all made possible by the stunning new movement developed entirely from scratch by AP. The new hand wound Manufacture calibre 2923 Laptimer Chronograph houses 413 component parts and a total of 34 jewels and beats at a steady 28,800 vibrations per hour. 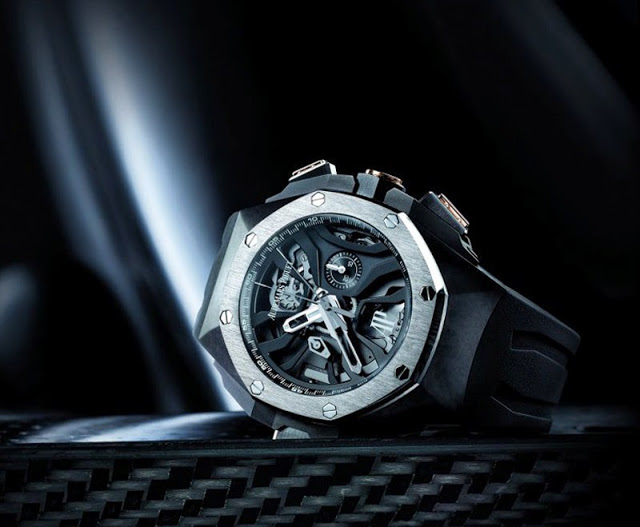 A beautiful and audacious new timepiece from Audemars Piguet that fits in with everything that makes Michael Schumacher who he is and AP the Manufacture they are. Limited to just 221 pieces.