You might think we’re not being as equal as we possibly can with this one because we’re pitting a watch on a leather strap against arguably one of the most iconic sports watches of all time. Luckily, as with the last instalment, both watches have a tourbillon on board so this should be pretty much even. Before we begin, you may remember (click here to read last month’s article) that we put a Chopard L.U.C against a Grönefeld and, even though it lost out, the Grönefeld was awarded the title of WristReview’s go to tourbillon watch of choice, a very high honour indeed. 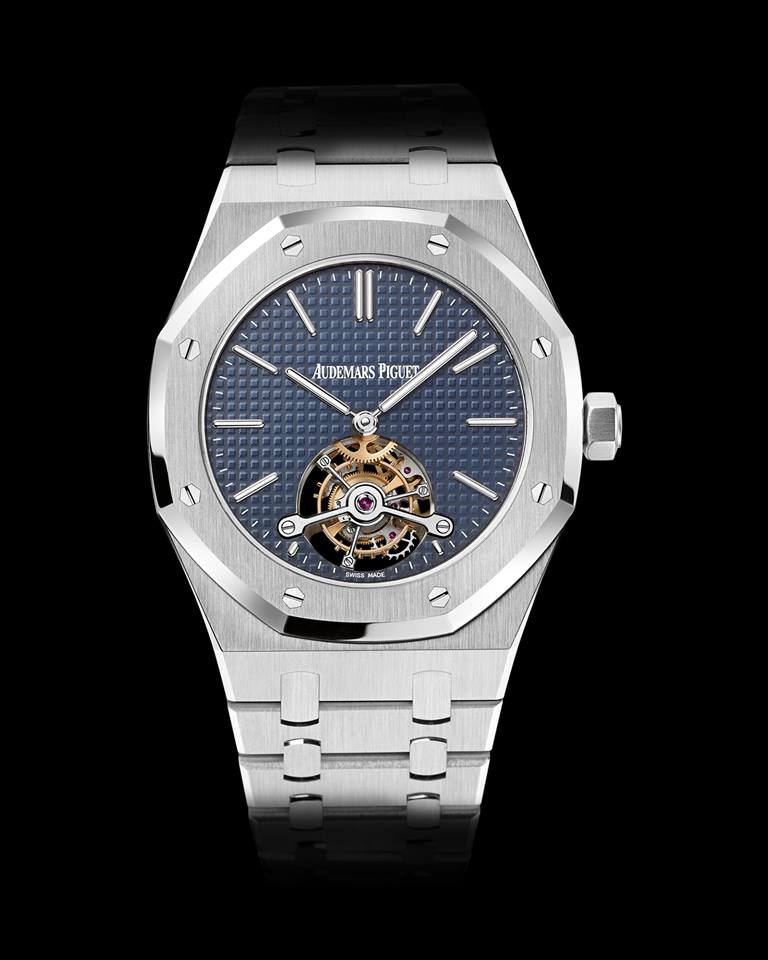 Before we find ourselves bogged down in “which watch deserves which accolade”, I’d like to introduce you to Audemars Piguet’s Royal Oak range. I won’t go over every single detail about how it came into being with you, but I can explain how the the Royal Oak name is applied to watches. First there’s the ‘Royal Oak’ range. This range consists of pieces that have many different complications such as time zones, chronographs and even a grande complication piece. They all share one thing in common with each other, no matter the complication (excluding the concept watches) and that is that they are all very reminiscent of the original Royal Oak from the 1970s with subtle changes being made over time to improve the watch even more. 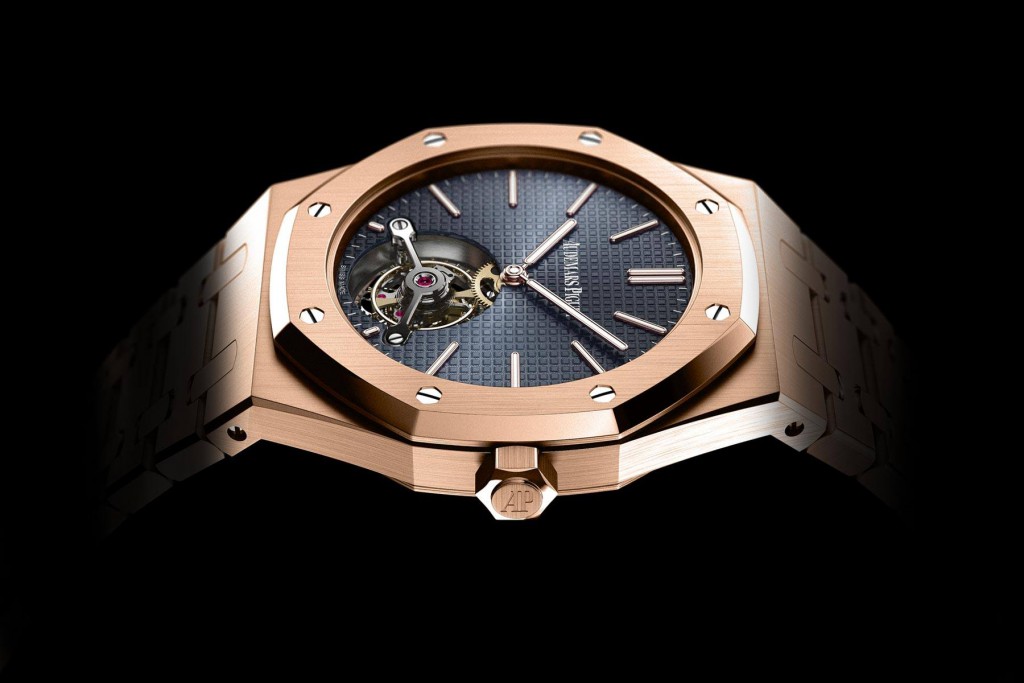 Then there’s Audemars Piguet’s more sporty range, the Royal Oak Offshore collection. This range still uses some design cues, such as the octagonal bezel, found on the Royal Oak watches, but it beefs them up a bit by increasing case dimensions, strengthening weak points in the movement and fitting a more resilient rubber strap. These watches are becoming slightly more common than their older brothers, partly due to the practicality/allure of a more practical AP watch, and also partly due to their collaborations with various professional sports people such as Lebron James and Kobe Bryant. 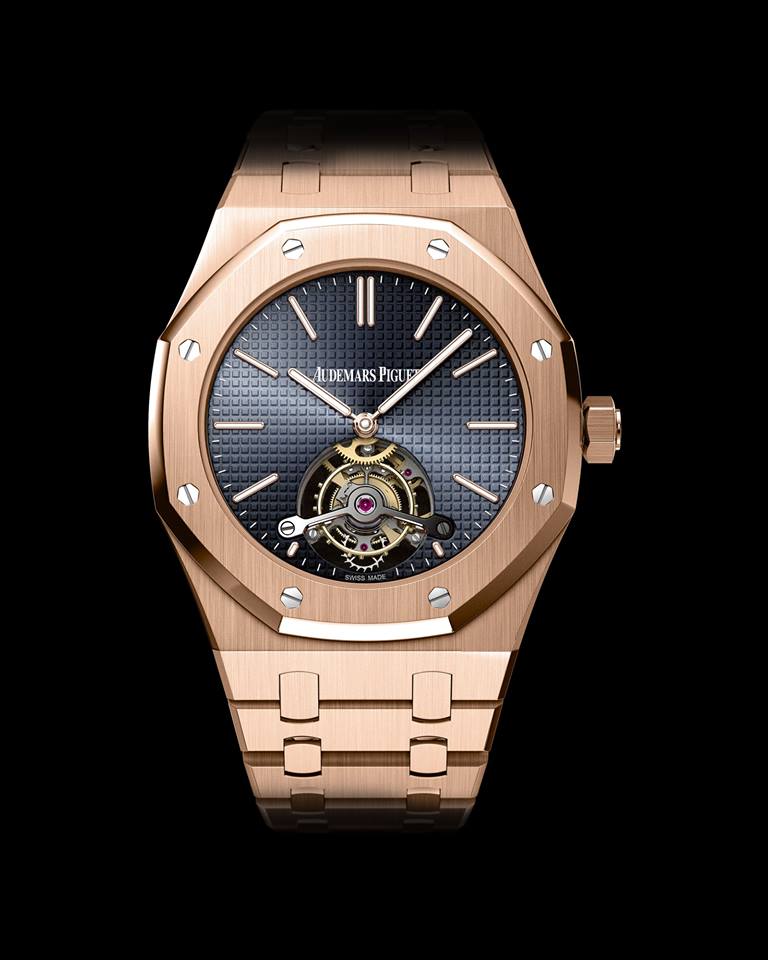 You’ll find yourself lost in the tourbillon on this piece. That’s because it’s displayed for the world to see at 6 O’clock on the dial. The cut-out in this watch is large enough to allow you to see the whole tourbillon with the only very slight obscuring coming from the bracket across the middle that suspends the tourbillon in place. To add to the look of this watch you are also able to see some of the other gears for the watch in the cut-out too with the main one being underneath the hands which have been kept in the same position on the dial for this watch.

This model of watch consists of two model reference numbers. Displayed above, in solid 18K rose gold is the model reference 26510 watch which is presented with a blue colour dial with Audemars Piguet’s well known “Petite Tapisserie” dial as well as rose gold hands and markers with added luminescence too. This reference is also available with the same colour dial but in steel, a familiar metal to the Royal Oak lineup which, among many things, is known for popularising steel pieces from haute horlogerie companies and overall making steel a worthwhile luxury metal. Then there is model reference 26512 which is also made of steel but instead uses a black dial, it keeps the “Petite Tapisserie” dial style and white gold hands and, well, pretty much every other feature the model reference 26510 has.

All three versions of the watch have some similar features to them. For a start they all have a tourbillon in them which makes up a part of the in-house made Audemars Piguet reference 2924 movement. This movement is a hand wound movement that’s made of 216 separate parts in total and has a power reserve of 70 hours with the balance coming from Breguet. On top of this all three watches are 41mm in diameter, 8.85mm thick and are all water resistant to 50 meters meaning that while you can get the watch wet if you submerge it it’s your own risk.