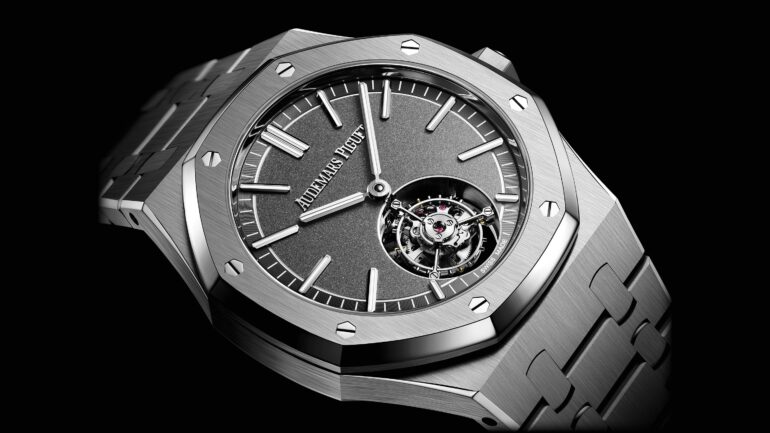 This is the first ever Royal Oak to have a flying tourbillon. 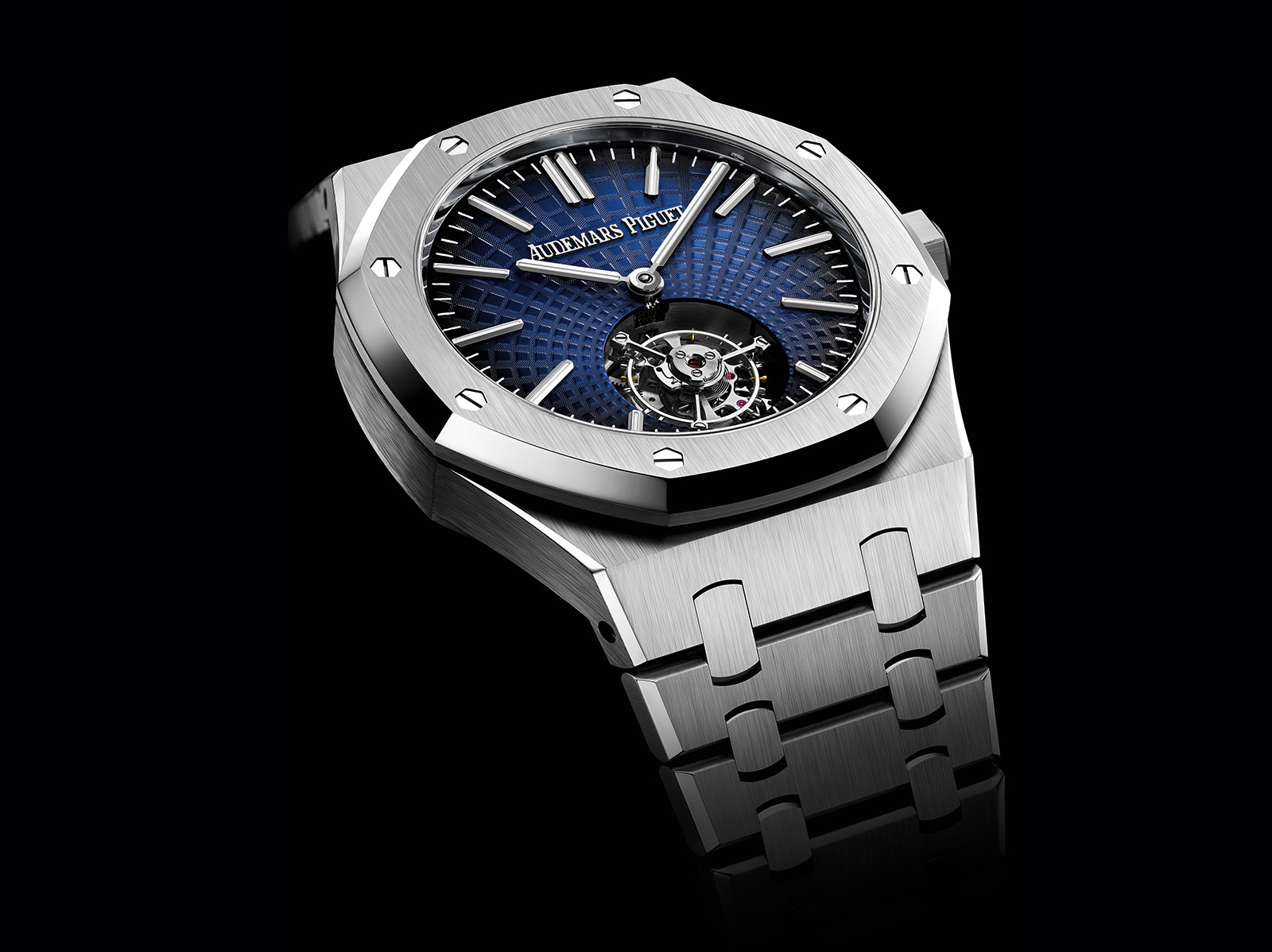 A couple of years ago, Audemars Piguet debuted the Royal Oak Extra-Thin Tourbillon, and it came with a unique sunburst tapisserie dial that changed the look of the watch dramatically. For 2020, Audemars Piguet brings back that sunburst tapisserie dial now with the flying tourbillon. That means that the tourbillon cage and the balance wheel inside it are only supported by one pinion which also supplies power to both the cage and the escapement. As I am not a qualified watchmaker, I couldn’t begin to tell you of how challenging that can be, but when you think that some tiny parts have to do a lot of work without any other supports AND the watch needs to be robust enough to be worn on the wrist, you start to see why watches like this command a high price. 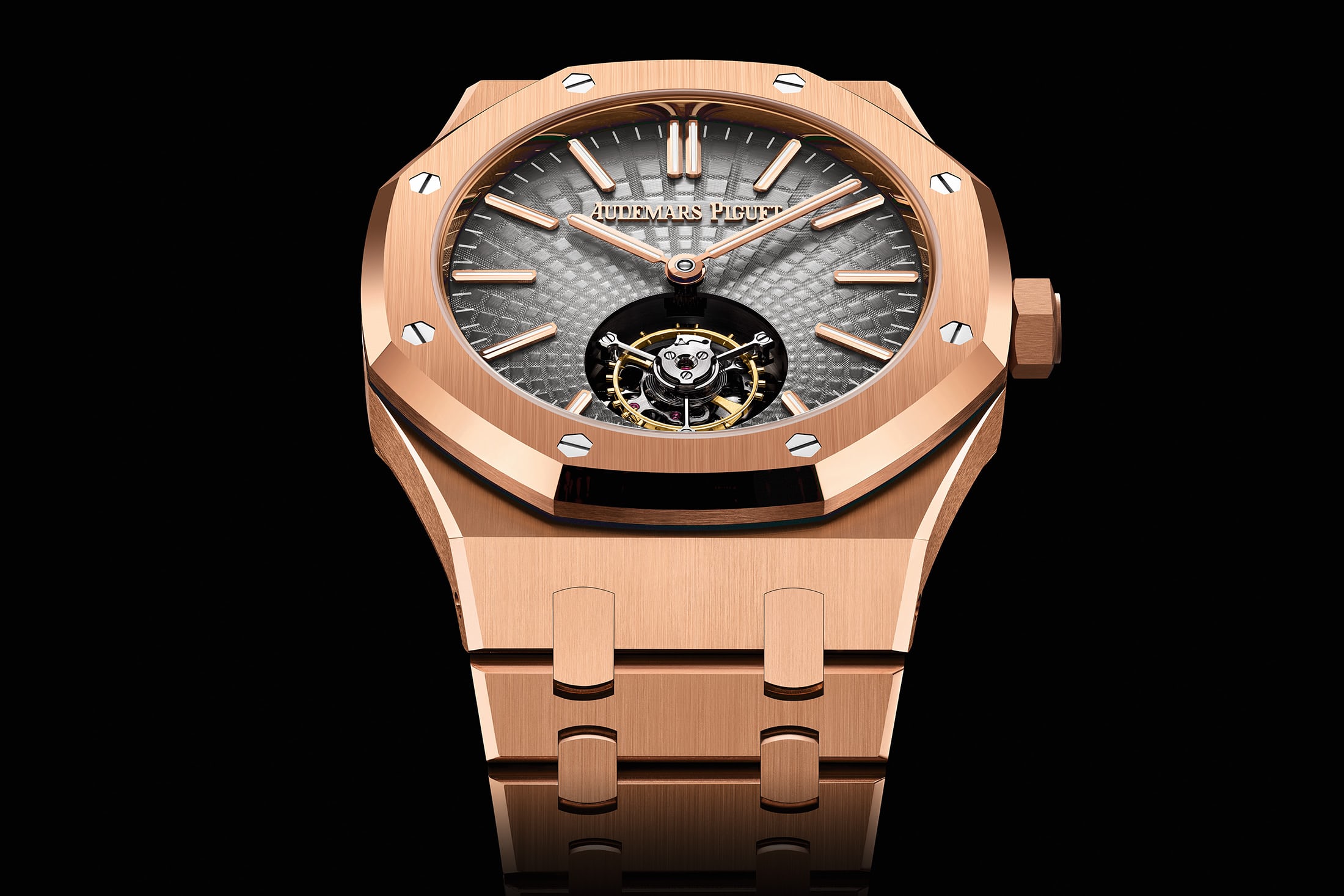 To add to that cost further, Audemars Piguet is releasing the Selfwinding Flying Tourbillon in three different materials. The steel-cased version of the Selfwinding Flying Tourbillon comes with a blue sunburst tapisserie dial. This sees the usual tapisserie (which some call a ‘waffle-cut’) pattern changed so that it seems to radiate out from the tourbillon. There’s also a solid 18k rose gold version which will undoubtedly look amazing when paired with a solid 18k rose gold bracelet. That version features a grey sunburst tapisserie dial. 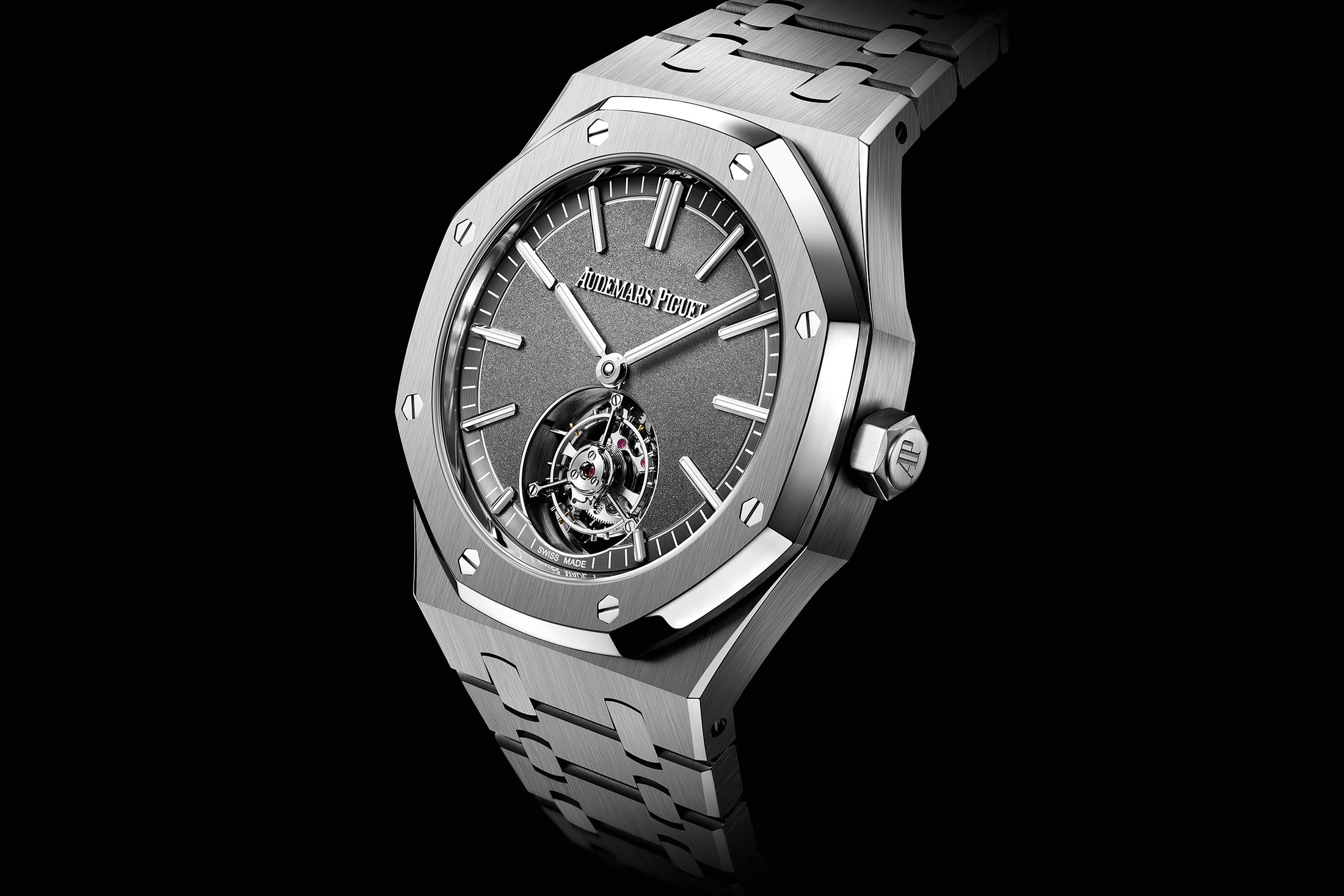 Perhaps the most unique-looking of all the new models is the titanium version. This features a silver dial that matches the colour of the case and has a unique grained finish. It comes with a titanium bracelet and folding clasp as well. All models also have luminescent hands and markers for some low-light practicality. The case measurements don’t change either, and all watches come in a 41mm x 10.4mm case with 50m of water resistance (it’s not meant to be an extreme rough-and-tumble sports watch anyway). 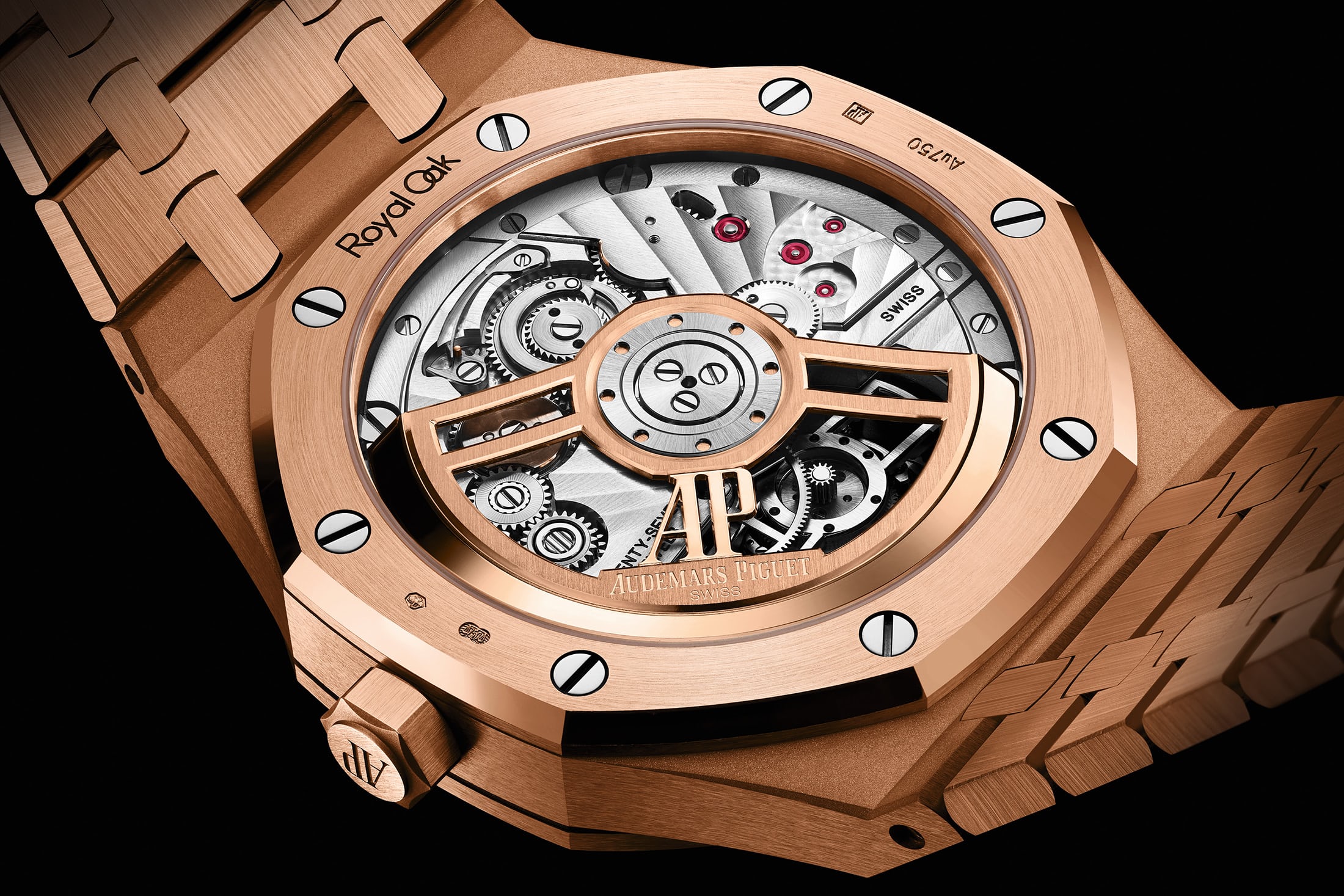 All models also have the same movement inside them, a new generation of automatic movements from the brand called the calibre 2950. It features a generous 60-hour power reserve with a 3Hz beat rate and 27 jewels. It’s the same movement found in the Code 11:59 flying tourbillon, and it shares the same distinctively modern styling on its automatic rotor. 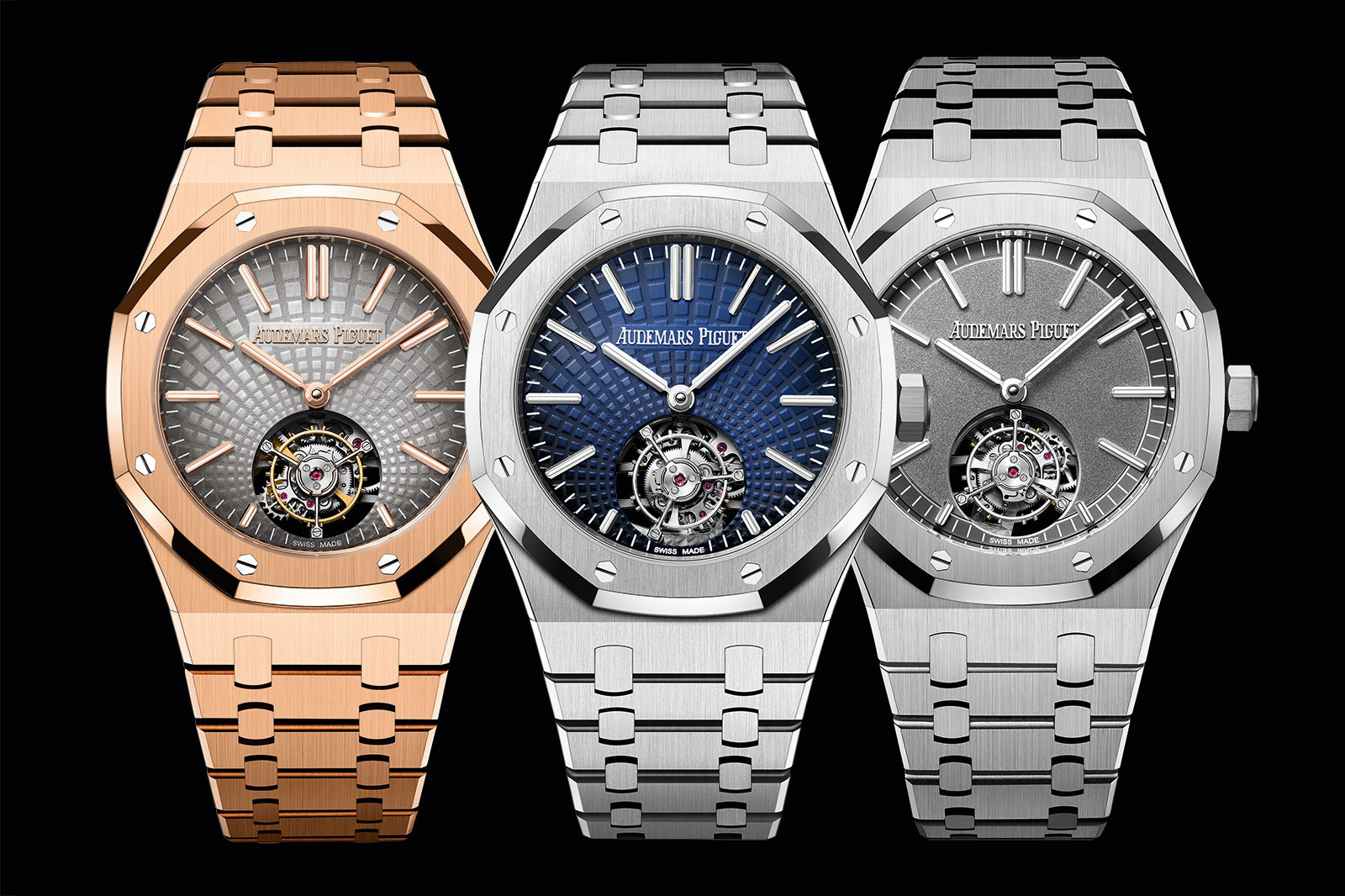 Interestingly, Audemars Piguet doesn’t punish you for choosing the titanium version over the steel, as they both have the same price of €138,700. What that actually means is Audemars Piguet can afford the extra cost of titanium. Anyway, the solid 18k rose gold version is €170,000. The references are 26530ST for the steel, 26530OR for the rose gold and 26350TI for the titanium. They’re not limited in production, but don’t expect these to be in every boutique and authorised dealer.