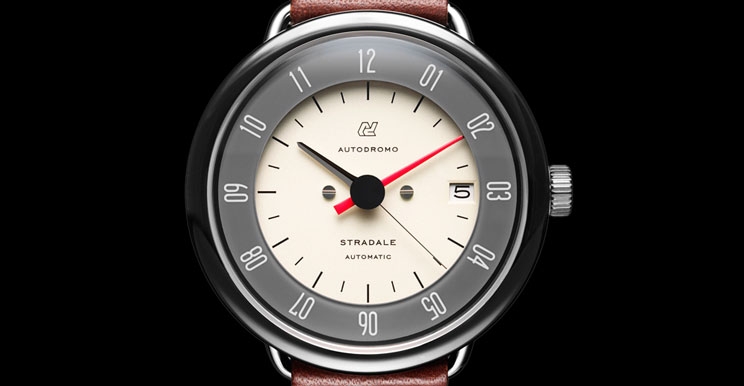 Italy. The “boot”shaped European country known for some of the best food ever such as pizza, pasta, ciabatta and all those glorious dishes in between. It’s also famous for fashion designers most of whom are based in the city that is a member of the Big Four for fashion. These are London, Paris, New York and you guessed it; Milan. Legendary designers such as Gucci, Persol and arguably the Yin to Cartier’s Yang, Bulgari, also hail from Italy. Let’s not get started on the Romans though as famous as they are because I want to look at the other industry that Italy is most known for; no it’s not ice cream (though it is delicious).

Cars. Italy has some of the world’s best known and most recognisable car brands ever and there truly is a company there for every kind of person. For those under 10 and who’s favourite colour is red there’s Ferrari. For all the dads out there Maserati caters just fine and even includes 2 free orchestras in every car. For those who are over ten but not quite adults yet Lamborghini  is the way to go (it’s ok though, none of us are really adults, right?). If you love classic racing and reliving the glory days of Italian motor-sport then both Lancia and Alfa Romeo provide more than enough excitement. Or maybe the city is more your place? Then Fiat is for you. And then there’s the custom coach builders, similar to Britain’s H.J Mulliner Park Ward thing, who are more than happy to tweak designs of cars to make them even more pretty. In case you hadn’t guessed already, the orchestras in a Maserati are in the exhaust pipe and work best when you floor it.

You have no idea where I’m going with this do you? That’s ok though because all shall be explained. You see, the subject of this article has Italian style in bucket loads. Autodromo really took their time here to make sure every little detail was as Italian car inspired as possible. 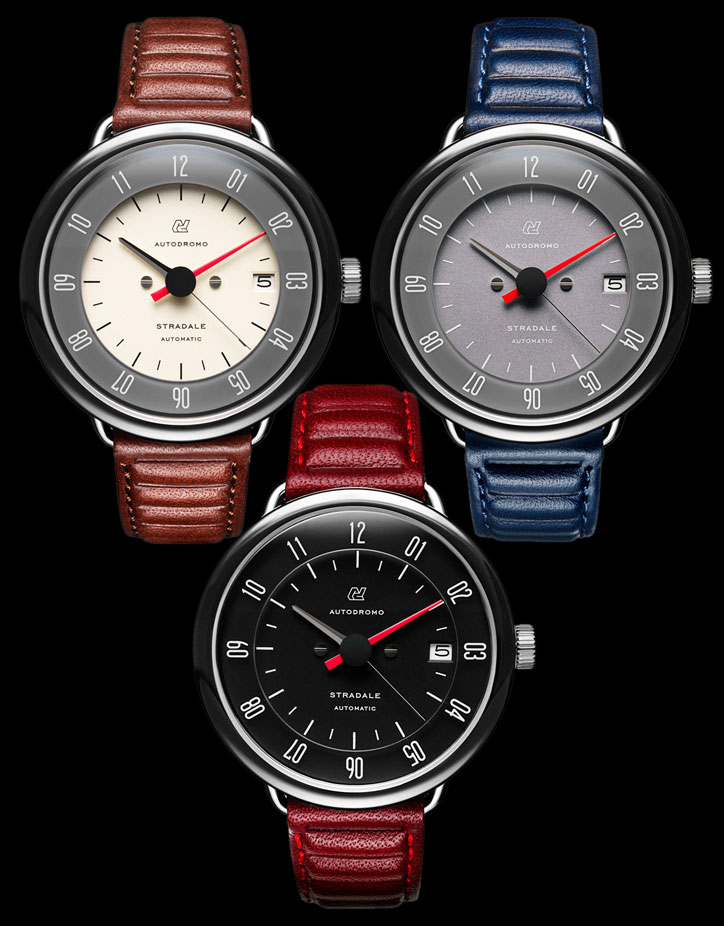 Before I examine the watch closely I wish to look at the leather strap that’s supplied with it first. Put simply, it’s the best looking strap I’ve ever seen. It’s ridged in such a way as though it reminds you of the seats in a classic 60’s Ferrari and is offered in three gorgeous colours to match the dials. There’s a very deep brown colour, similar to what you might find on a Patek. A funky blue that you really should see in person just to confirm what your eyes are telling you. And a luscious burgundy which is my personal favourite. These straps are accentuated by the lugs which are tiny. in all honesty I’m thankful they didn’t add huge lugs onto it which would just make the whole watch just a little too busy.

Let’s take a look at the rest of the watch. If you’ve managed to draw yourself away from the straps then you’re not only doing better than I am, but you’re also in for a nice surprise. 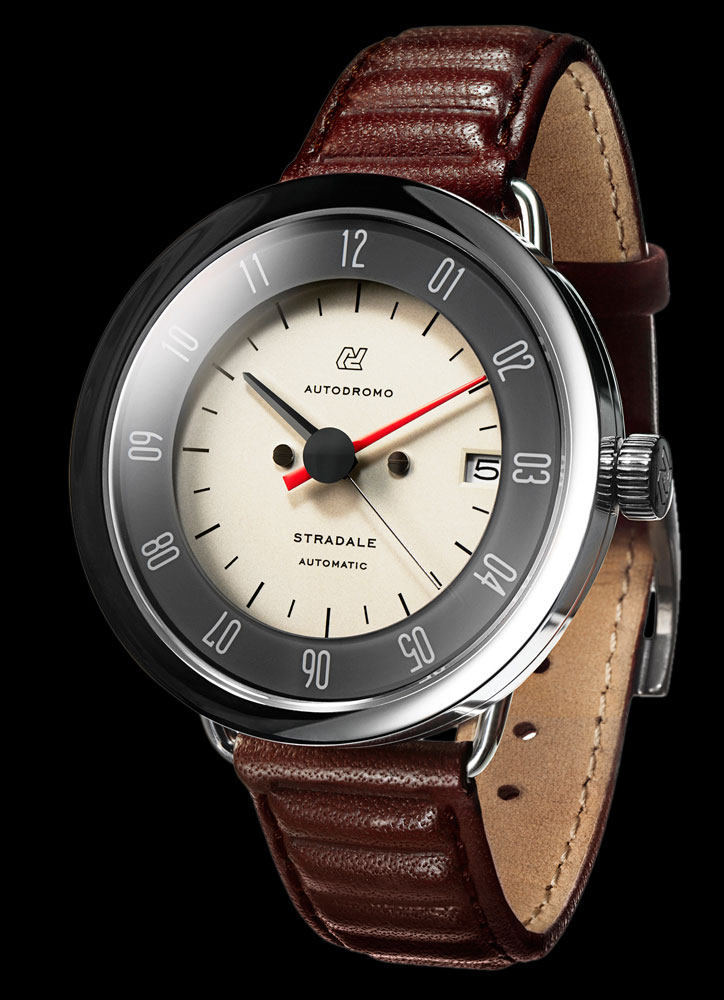 The dial is the second thing I want to draw your attention to. It’s a multi layer arrangement whereby the hour and second increments are suspended a tier above the rest of the dial. This means you get a stunning 3D effect when you look at the watch from an angle. If that isn’t enough, the increments I mentioned earlier are styled to look like they belong on the dashboard of a classic Italian car which is good news indeed. 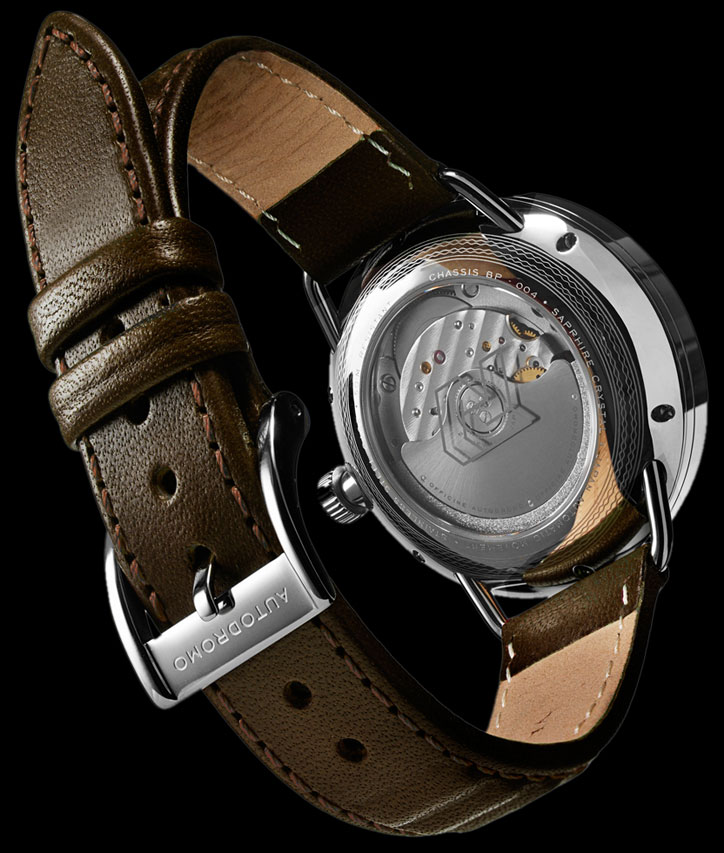 It’s well known that if you buy an Italian car then you’d have to make some sort of compromise somewhere along the line and with the Stradale it’s the movement. It’s a Japanese made Miyota 9015 and begins life in the factories of Citizen. “There’s nothing wrong with that”I hear you saying under your breath. And yes, the 9015 is a good workhorse of a movement which is solid and reliable. However because it isn’t in house made, or even made on the same continent, that i have to sadly mark it down a little. However most of the time I’d be distracted by the looks of it which make up for the Japanese movement altogether.

It’s the same with an Italian car in a way. You just know that it’ll never be as definite as say a Mercedes and more likely than not it’ll break down the day the warranty runs out. But then you look at it and you think, ‘I can live with this’. Remember it may have a Japanese engine, but the heart and soul of Italy are in the design. All 40mm of it. It’s also pretty slim at just 11mm thick.

The best part is that unlike the Monoposto, the Stradale is a permanent part of the Autodromo collection, and it’s all yours for $875US. For more info, please visit autodromo.com