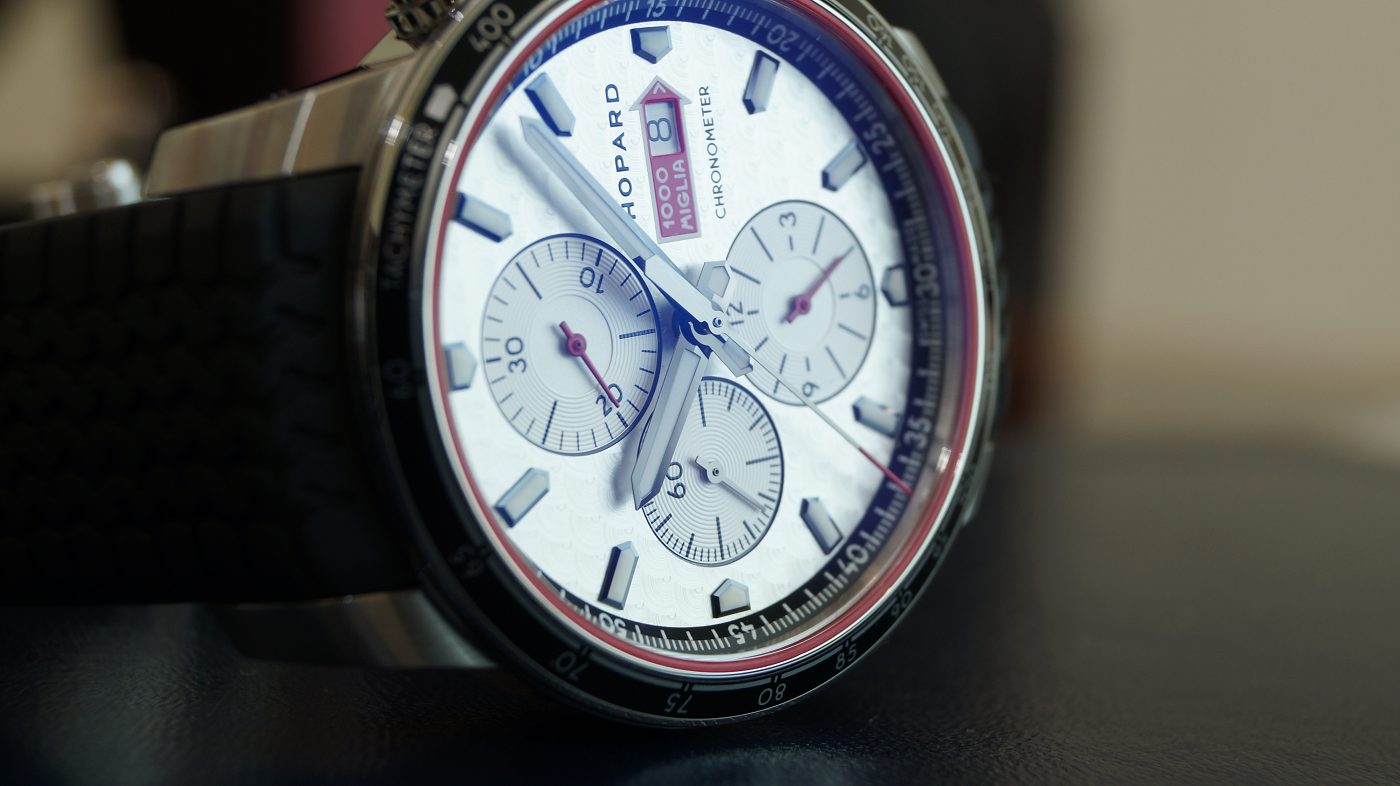 We are once again back to talk once more about Chopard which we have been doing quite a lot recently. Don’t worry, we shall reveal all once the mania that is Baselworld has subsided, until then here’s our look at one of the watches presented by Chopard at this year’s show in Basel, Switzerland. While yes, most of the releases seen were either for women or dress watches, Chopard has been working away on creating new sports watches. Let’s get straight down to business. 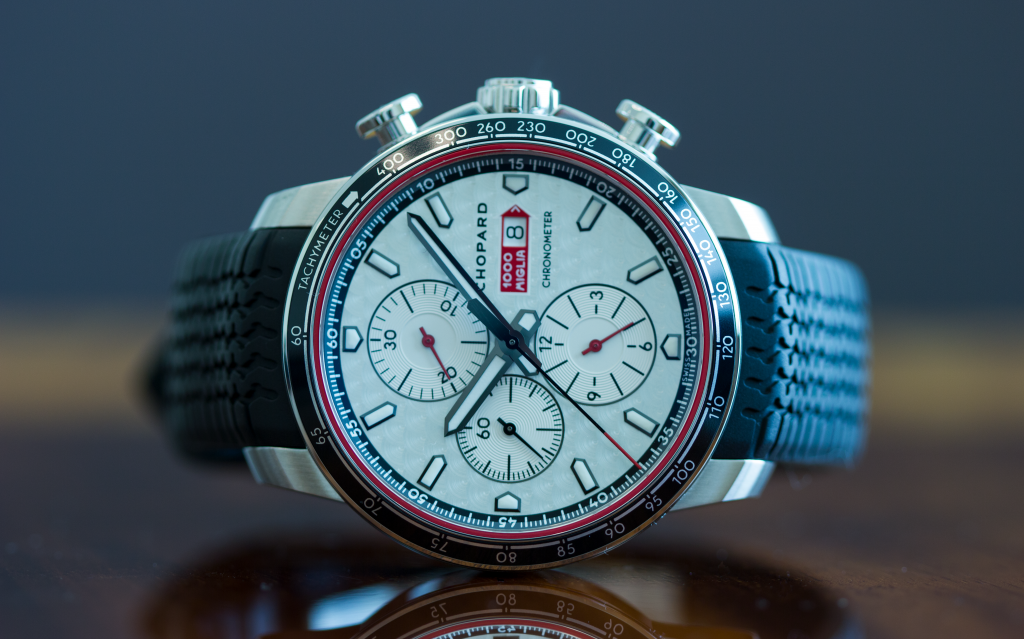 The case is made of stainless steel. Heavy. Solid. Quality. We particularly liked how thick this watch is, it is definitely not sleek by any means. The sides of the case aren’t rounded, they’re flat and the bezel provides very little gain for a dress cuff. If you extended your cuffs a bit it could work quite well with a shirt and tie sans jacket. 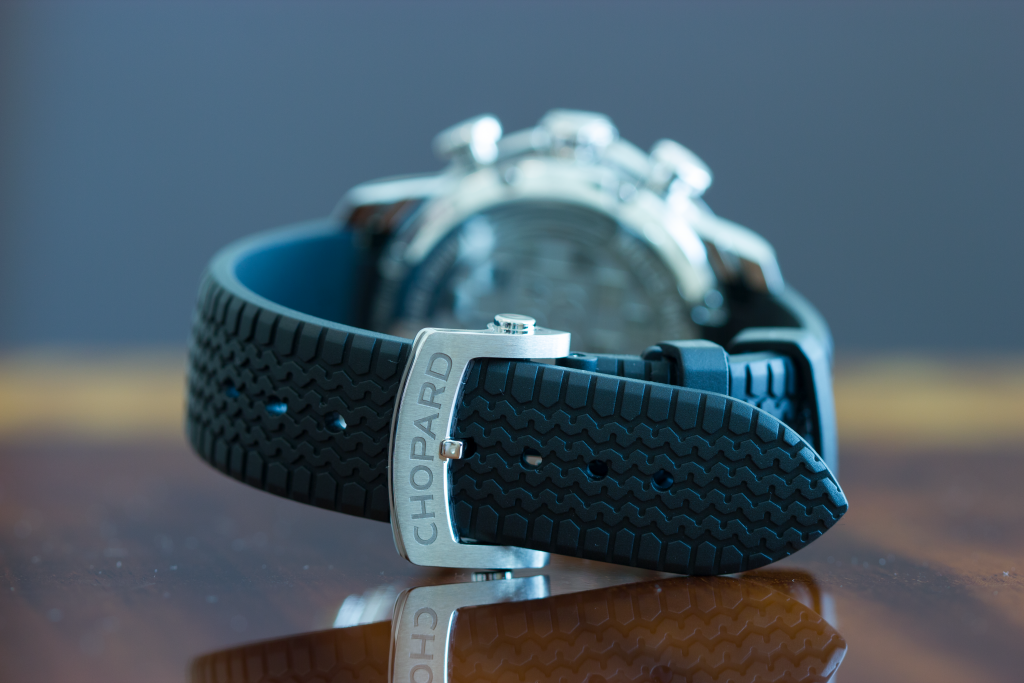 The colour combinations aren’t in your face and the black strap absorbs some of the light. The 44mm case is nearly 14mm thick too, but it’s completely polished to a mirror finish, no brushing to be seen here. The bezel on this watch isn’t ceramic, some will be delighted to hear, instead, it’s good ol’ fashioned painted aluminium which has been fixed into place. The 8mm diameter crown of the watch has been given a cool little sports car steering wheel design, reminiscent of the cars that would’ve raced in the Mille Miglia and the pushers have their own distinct grippy texture. The steel case keeps the watch water resistant to 100m, not too shabby considering it’s a chrono. 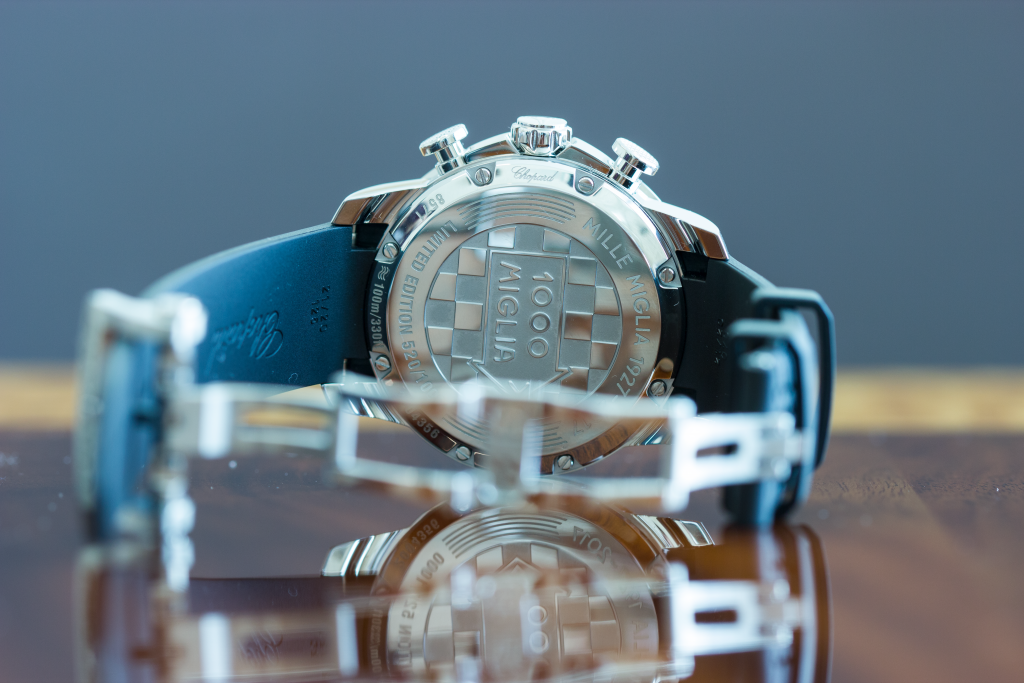 The movement isn’t visible, however, it’s been hidden behind a decorated caseback inscribed with the Mille Miglia logo and chequered race flags to give it a sportier feel. The movement inside the watch is not an ETA based one you’ll be glad to hear, what would otherwise be a deal breaker for some. Yes, the rumours are true that Chopard is doing all it can to take all of its watches away from outsourced movements and this can only increase people’s opinion of the company. Each ‘engine’ has been tested by COSC to ensure a chronometer level of accuracy, without the chronograph running the movement will run for 48 hours. Being family run and independent, these sort of things matter more to Mr. and Mrs. Sheufele than big corporations like Swatch and Richemont. 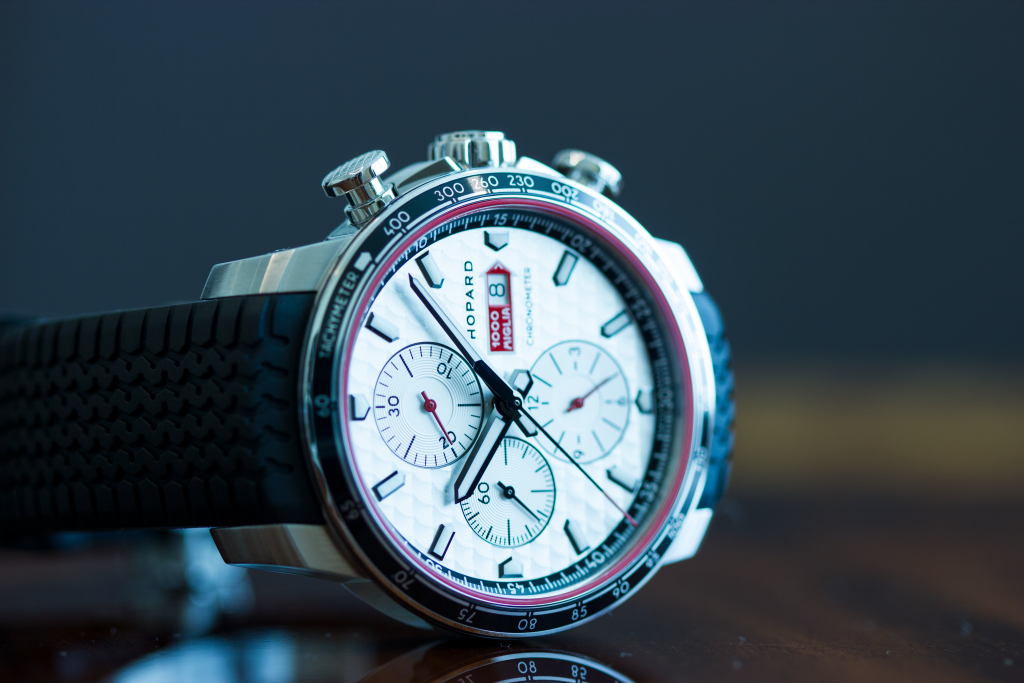 Because there’s a face that potential partners can put to the company, it makes it a lot easier for collaborations such as this one to happen. The subtle racing inspired engine turned (perlage) dial glints in the light but not in a way that would be too distracting as it isn’t fully polished. You’d notice it standing out in the boutique window when compared to the other Mille Miglia watches. Not to say that they are poor watches as this couldn’t be further from the truth, but the 2017 Race Edition has a little extra occasion about it, like turning up to a classic car show in a Jaguar E-Type. 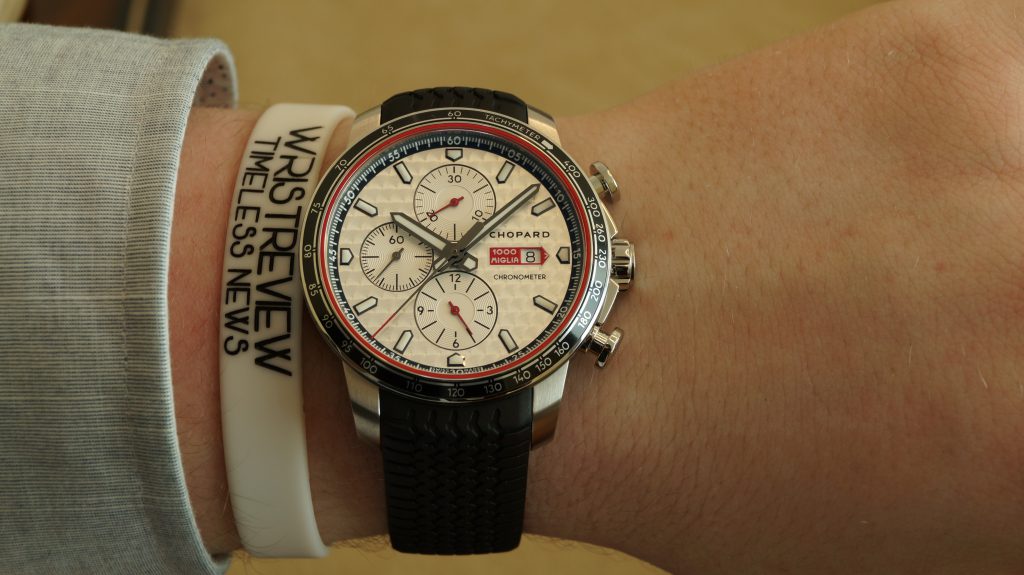 Red accents placed around the watch make it fit in even further with the aesthetic of the motor industry, not only is there the red Mille Miglia logo placed around the date window (a nice touch we rather like), there’s also a red band inside the bezel which adds a splash of colour more watches need. It’s good that this wasn’t placed with other colours, so often these days make watches featuring quite contrasting colours such as red and yellow on one watch. Remember, classic sports cars are designed to perform first and look pretty second although there are some exceptions to this (look up the Fiat 8V Ghia Supersonic, pretty no?). 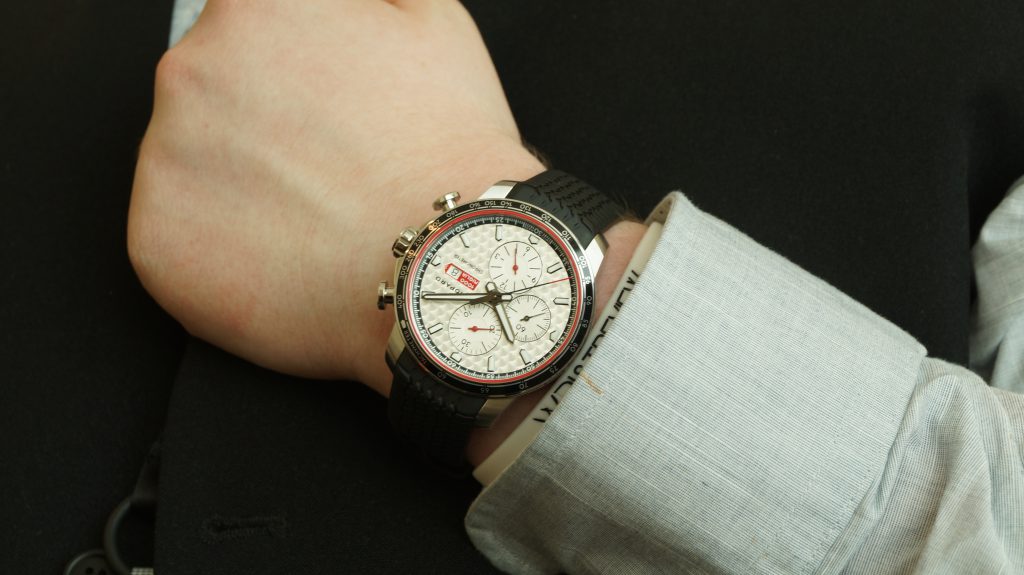 The chronograph on the dial has been given a 6, 9, 12 layout, which is rarer than the 3, 6, 9 that most manufactures use. What this means is that all the subdials are on the left-hand side of the watch, rather than being placed at the bottom like on an Omega Speedmaster. The chronograph subdials are painted with red to show that sports mode has been engaged, while the running seconds for the watch has been given a black paint treatment and then placed at 9 O’clock. 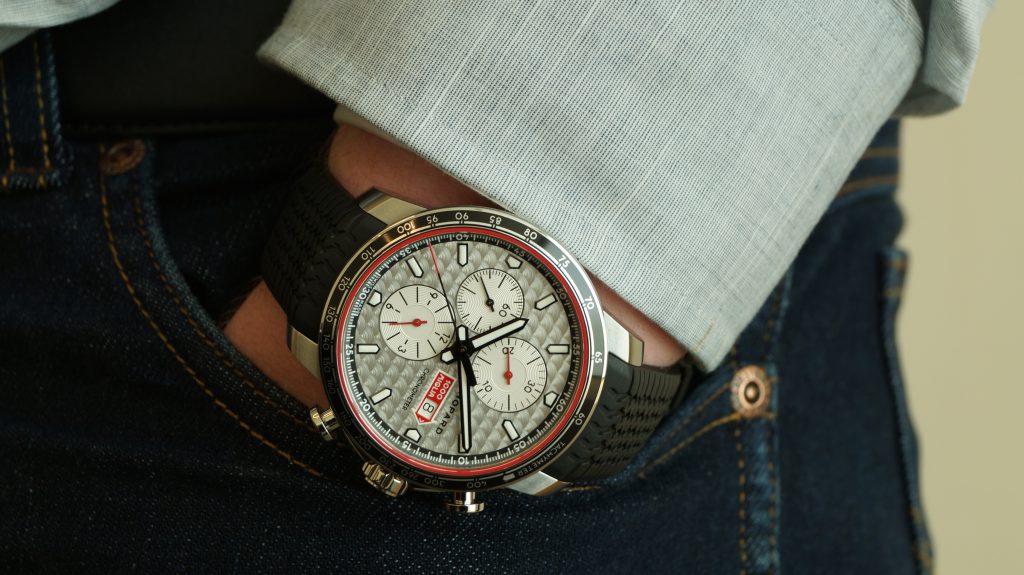 The best thing about old sports cars is that they perform while keeping their composure. If you look at modern cars of today, to get the highest performance variant of a model often means wings and splitters and alloys and laser guns and stuff need to be added to the car which can sometimes make it pretty ugly. Looking at older Alfa Romeos and Maseratis and such, these cars often won the Mille Miglia and other events with a lot of engine tuning inside and only a few racing stickers outside. This is why we think the Chopard Mille Miglia Race edition fits so well with the Mille Miglia, because it performs all the necessary functions of any chronograph watch while looking confident about itself. While the polished case sides and lugs might be prone to scratches if this is a daily wear, the pelage dial definitely balances it out. The red accents make it stand out during the day, and the lumed hands and indices make it stand out at night, it’s not only a cool watch but a petrolhead’s ideal timepiece. Shame it’s limited to 1000 pieces, but that just means you have to get in faster. For more info, please visit chopard.com