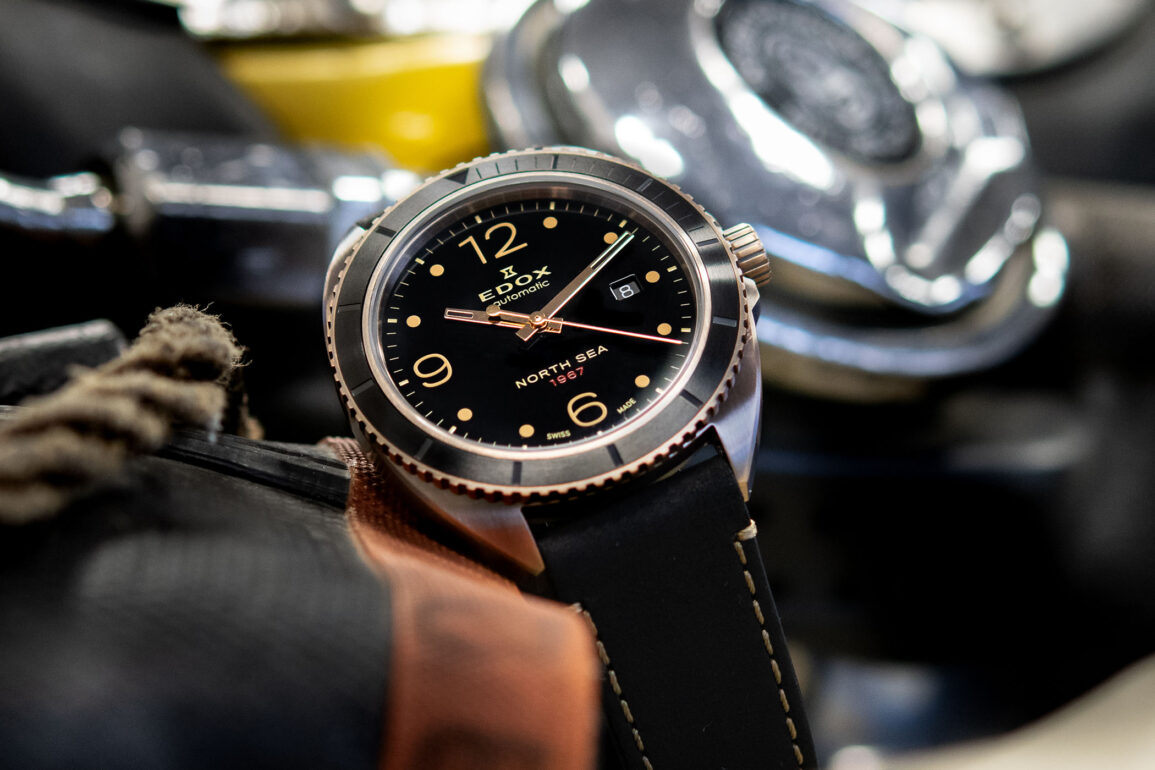 Okay, so some of you may remember a little while ago we covered a watch by Edox called the North Sea 1978 Date Automatic watch, released to celebrate something called the ‘Inverse Moon Landing’, which I’m pretty sure is a name Edox made up. To celebrate, um, some more diving in the North Sea. Let’s take a closer look. 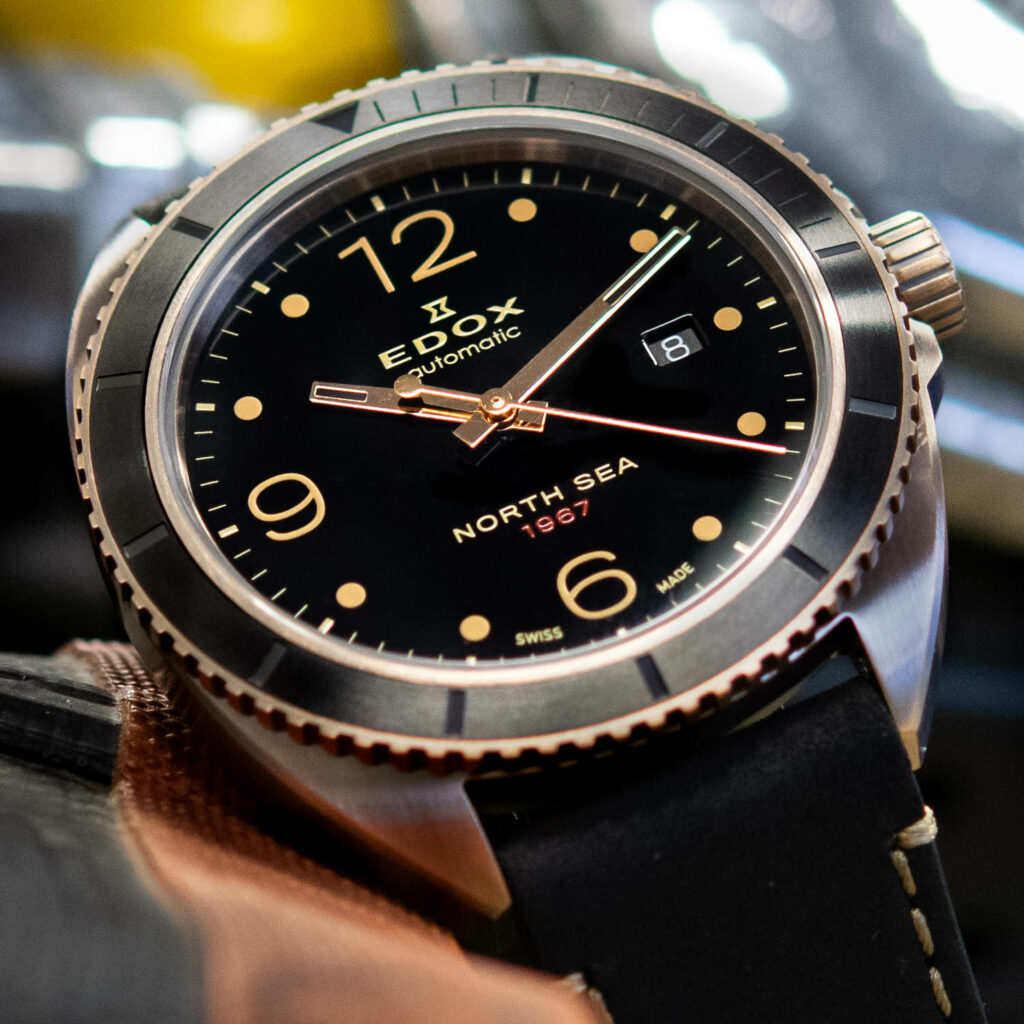 The watch keeps the same proportions as the North Sea 1978 watch, which means a case of 43mm x 14mm is the order of the day here. Instead of a black DLC-coated steel case, Edox has chosen to use bronze for this one to maximise the retro-theme going on with the watch. The fact that the bronze case will patinate will help to amp up the retro vibe even more. It would probably help to point out that this watch isn’t just paying tribute to a series of dives in the 60s but also to Edox’ history of making diving watches.

Edox developed a system back in the 1960s which used two ‘O’ ring seals instead of one to ensure maximum water resistance, giving their Delfin model a water resistance of 500m which was extremely impressive back in the day. Edox employs this double ‘O’ ring system today, although this watch is only water-resistant to 320m. 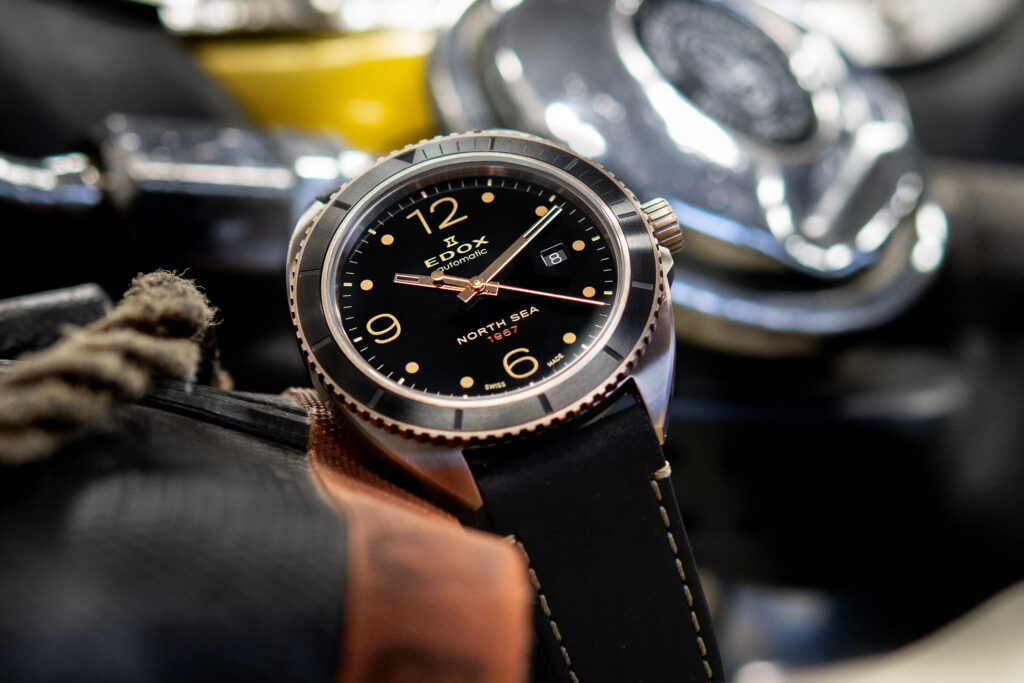 The dial is the same as on the North Sea 1978, combining gold-coloured hands with a black backdrop for a classic look. All the markers have lume and the hands (and the counterbalance for the seconds hand too). There’s also a date window at 3 O’clock, although I wonder how legible this will be. Speaking of legibility, I’m also unsure of the bezel, which doesn’t appear to have any lume; this could affect underwater usability as the watch’s timing function relies on being able to see the position of the bezel in the murky depths.

Inside the case is a Sellita SW200 which they call the calibre 80A. It has a 4Hz beat rate but a short power reserve of 38-hours. You also can’t see the movement as a caseback covers it with an engraving of a diving helmet on it.

The watch can be purchased with either a black leather strap with snazzy gold stitching or a black nylon strap which will be more suited to the sea. The price is reasonable too, it’ll cost you €1790, and it’s limited to 320 examples.