Remember SIHH? That thing that happens once a year that happened not too long ago now? You should do, it’s one of the biggest and most important events of the year for the watch industry. Big and small brands alike all come under one (enormous) roof to show off their hard work, and this year I feel like we had quite an array of new and interesting watches. One of everyone’s favourite brands, and a real powerhouse in terms of watchmaking excellence is A. Lange & Söhne. Their watches are often crowned the kings of the show, and though Vacheron Constantin is giving them a run for their money in both simple and unique complex watches, Lange’s array of creative designs is something which pulls in their favour. 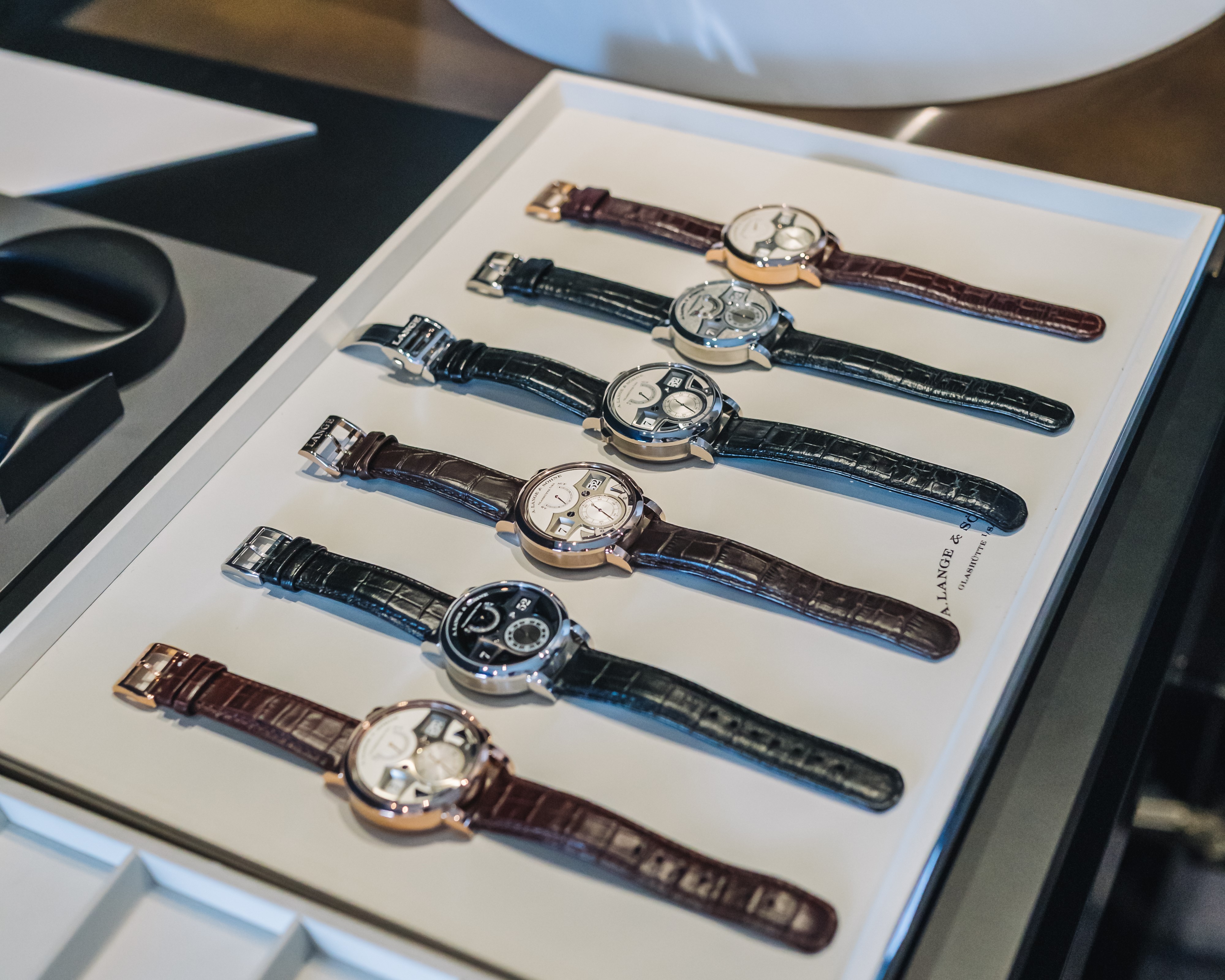 One of their most recognisable and unique designs is the Zeitwerk range, which replaces hands with wheels for both a unique look, increased complexity and easy readability. There have been a few variations of the traditional Zeitwerk, both of which include a striking mechanism of some kind, either striking hours and quarter hours automatically or via a minute repeater. However, the classic Zeitwerk has been shortlisted by many to be one of the greatest modern dress watches of all time, but it’s lacked one thing that nearly all of its competitors have: a date display. That was, until now, and it’s only taken them ten years to make it. 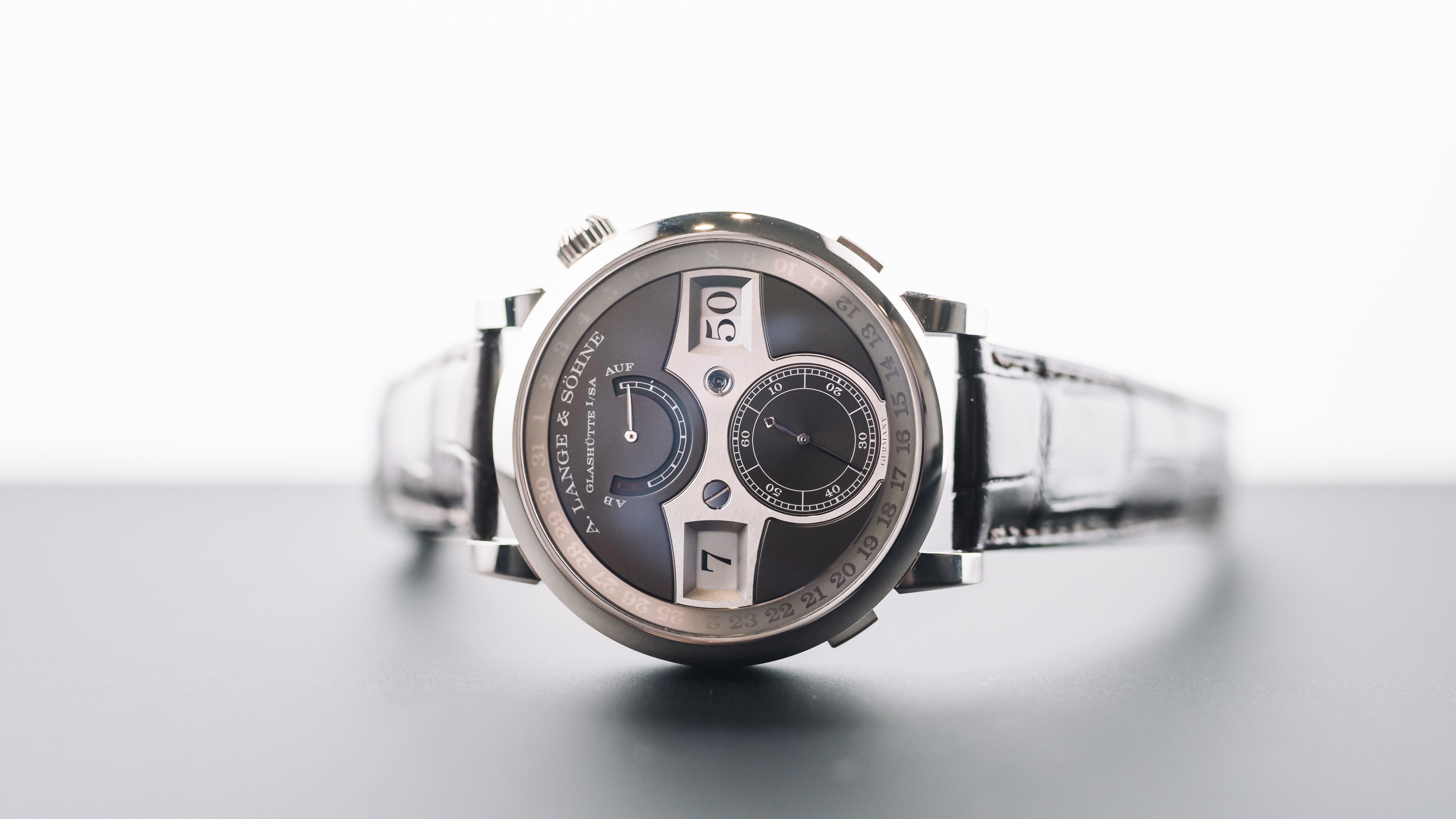 Admittedly it seems an odd arrangement at first, alien even, but when you stop and think about it logically, it is the only way a date can be placed on this watch. The design is so unique to this model that having it any other way simply wouldn’t work. Another window would be out of place, the central bridge which seems almost reminiscent of the Bat Signal is a signature of the watch that would conflict with another window. A hand could have been placed in here, but there is no space for it where the power reserve is, and having the running seconds adds yet more animation to the dial, not to mention that the characters would be too small. Similarly, size would again become an issue of the date were on the back, a habit H. Moser & Cie has, but as we all know complex Lange watches tend to be rather thick. Thankfully, the ring display around the bezel keeps the bulk in check. Surprisingly, the Zeitwerk Date is 0.3mm thinner at 12.3mm than the standard Zeitwerk, with the diameter taking the hit and increasing to 44.2mm from 41.9mm of the “normal” Zeitwerk. That size increase will only add to the mass of the watch, Lange’s watches are known to be sturdy feeling pieces, I certainly found that out in my Fortnight Review of the Grand Lange 1, so imagine how weighty this’ll be. It’s also easy to understand, a reverse printed sapphire disk with the numbers left see-through allows a second disk below with one red segment allows the dates to be highlighted with ease. Admittedly, it doesn’t look particularly easy to see the distinction in photos, but in person, it’s actually quite clear. This design also allows for some exciting depth play around the dial, which mirrors the multiple layers of the movement nicely. 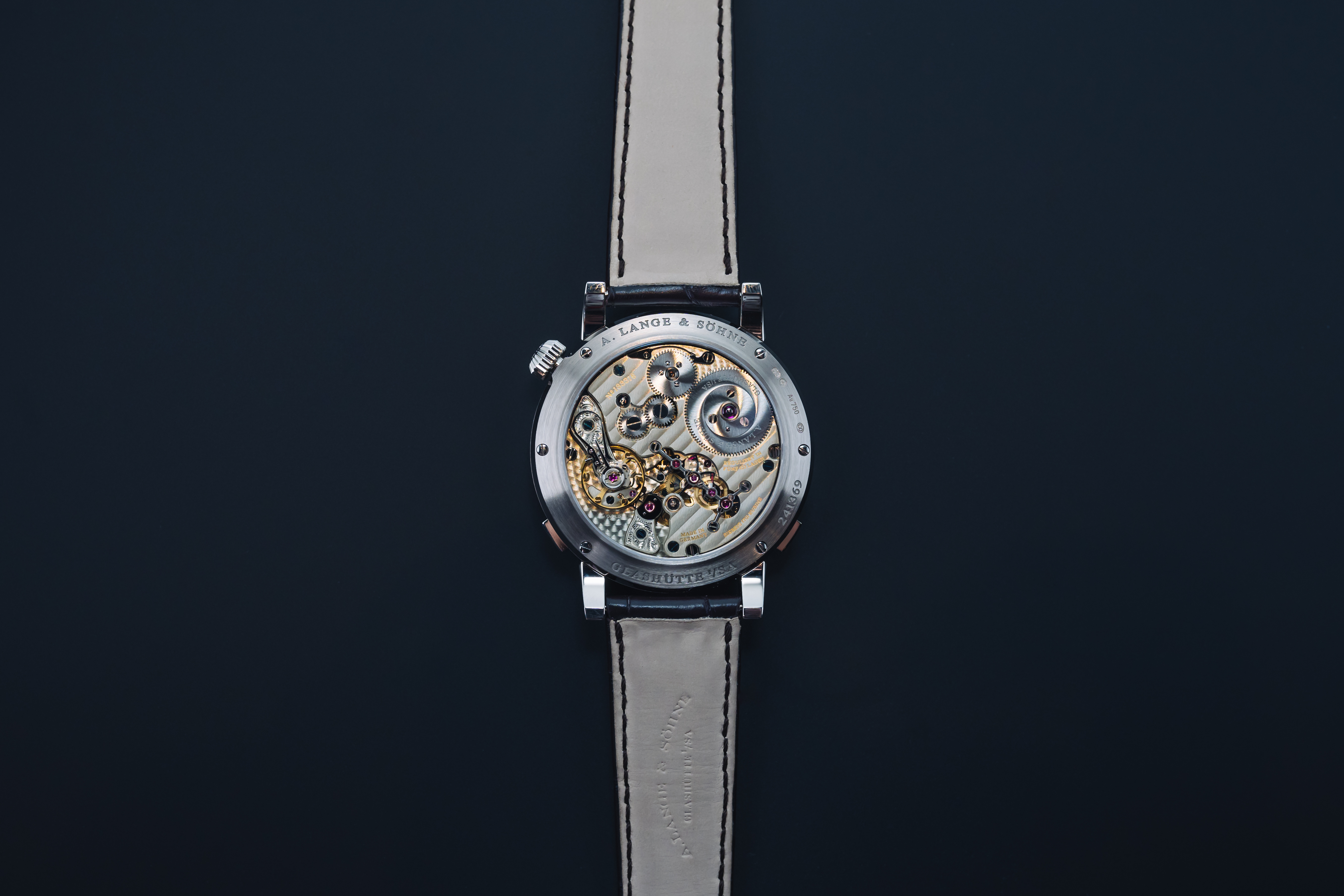 Powering the almighty Zeitwerk Date is the equally almighty calibre L043.8. In reality, it doesn’t appear to be that different from the no-date Zeitwerk, which isn’t a bad thing in itself. Like the original Zeitwerk, the new one features a patented constant force escapement, a remontoire, which does a few things to enhance this watch in particular. Normally reserved for the independent watch brands, the remontoire is an extra spring system which stores the power from the balance wheel and releases it at a steady rate. By regulating the flow of energy going to the hands into consistent pulses, it naturally evens out the subtle inaccuracies of the escapement assembly, delivering a watch which can still meet highly demanding chronometric tests. 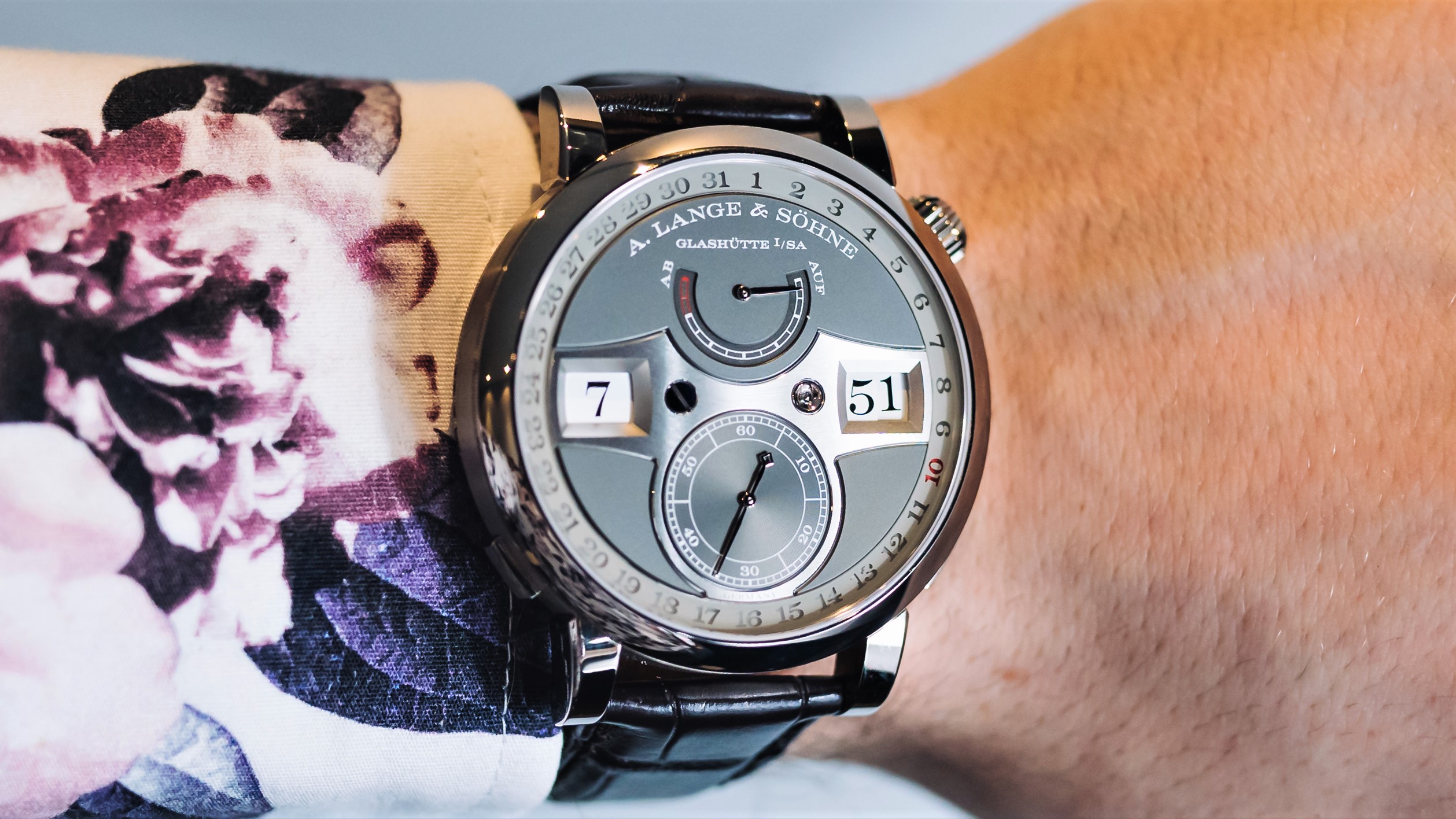 In this instance, the remontoire provides an extra feature. You may have read in my recent introduction of Gérald Genta’s 50th-anniversary watch that it takes an enormous amount of power to move hands around in a format that isn’t a consistent sweep. In the Zeitwerk Date, that’s taken a step further, with one disk moving every minute, another every ten minutes, a third one every hour and then an enormous ring date system once a day. This tiny little box of springs and gears needs to move around all that stuff, then add in the fact that it’s a Lange, so the jump must be smooth, crisp and whisper quiet (if audible at all) and you have a big job. Luckily, a remontoire can help, storing the power and releasing it in timed intervals takes the strain off of the delicate escapement assembly. Interestingly, the balance wheel this watch is designed and made in-house, as was the balance wheel in the original Zeitwerk, though in the Zeitwerk Date it is both smaller and lighter. It’s made of 516 components and has a manually wound power reserve of 72 hours.

So, is this the most practical watch of the Zeitwerk line, now that it has a date? Well, sadly, I don’t think so. In order to preserve the perfect dimensions of the watch as well as fit in that German Silver calibre, the watch has become very large in diameter, and it’s still relatively thick. Whether you could put it with a suit, there is no argument; people will wear anything with a suit these days. Whether you can do it convincingly is another matter, you need larger wrists for it. You’ll get an excellent weightlifting workout, though. 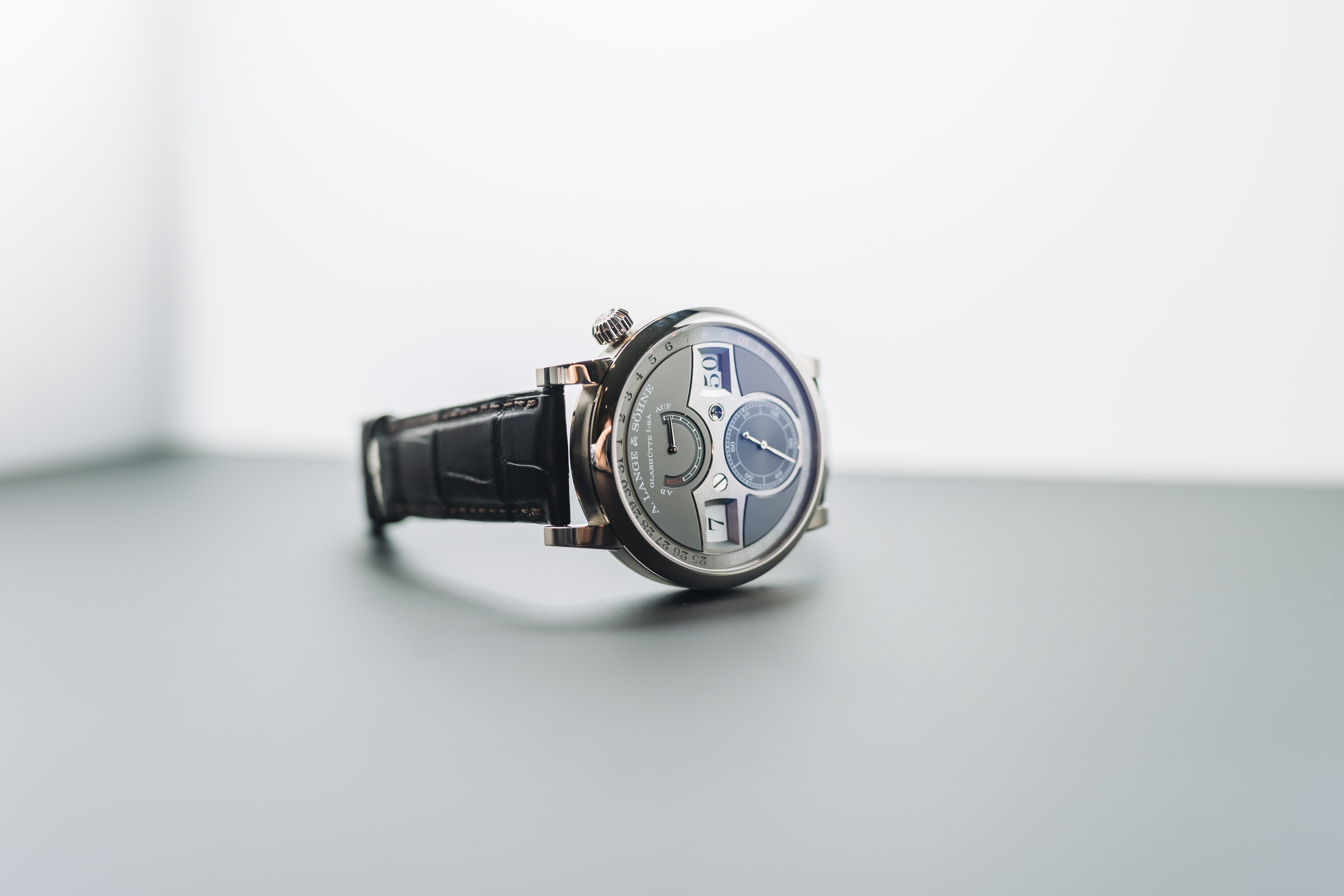 So for now at least it seems the Zeitwerk no-date remains the most practical, I mean, there isn’t a huge range of choice anyway, both the other alternatives have a hammer and gong setup of one variety or another. Luckily, there isn’t exactly much in the way of competition for the Zeitwerk line, in fact, the only one I can think of at this moment in time that’s remotely similar is from sister Richemont brand IWC, the Tribute to Pallweber. But, let’s be serious for a moment, though that watch is undoubtedly attractive, I don’t feel it’s something that’s going to be keeping the bosses of Lange up at night when they have the Zeitwerk on their side. Visit A. Lange & Söhne here.