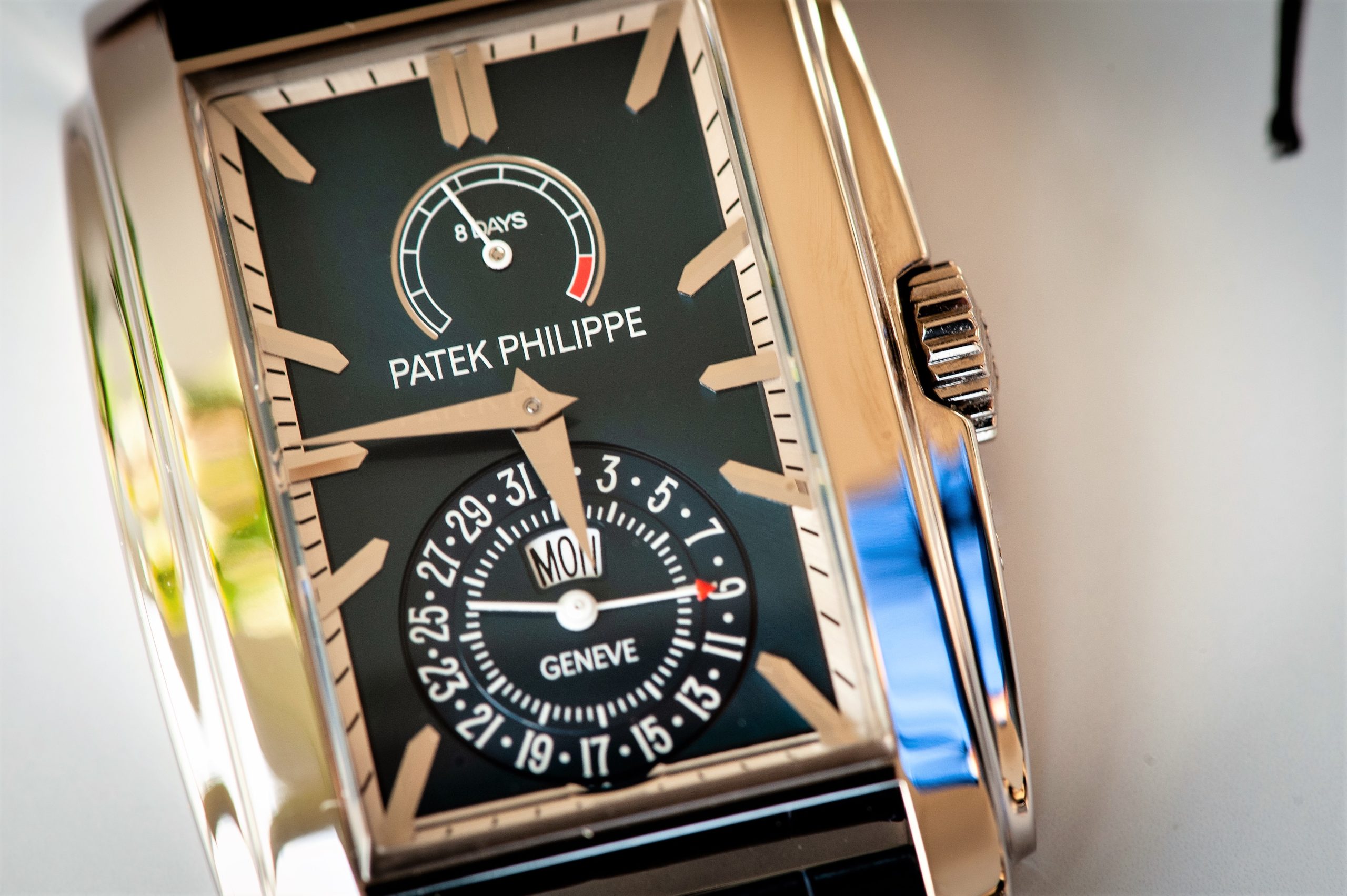 Today’s article is about a Ref. 5200 by the distinguished watch manufacturer Patek Philippe.

This watch may, in many ways, be considered an underdog by the otherwise illustrious manufacturer as it by no means received a warm welcome at Baselworld 2013, in spite of the fact that it houses an interesting calibre in a rectangular case – even anatomically curved, increasing its wear comfort notably.

The purpose of this article is not only to provide a review of this model together with some considerations regarding the reason for the tepid reception at Baselworld, but also to shed some light on why this discontinued model (production period: 2013-2018) deserves your attention. 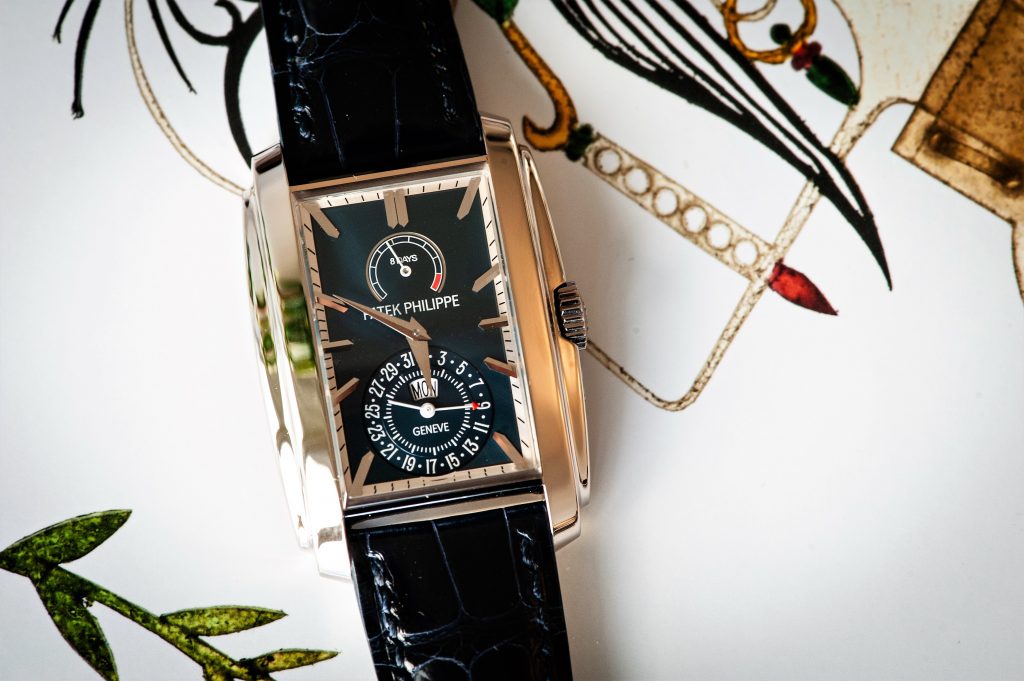 This timepiece can, in many ways, be said to combine the best of two worlds as the elegant case contains a true rectangular calibre of which the former evidently was inspired by the philosophy of the earlier Art Deco period, the focus of which was pomp and circumstance, as the case, among other things, is divided into two flanks and executed in a white precious metal which was ever so sought after in the 1920s. According to some sources, white gold was introduced as a less expensive alternative to the significantly rarer platinum. 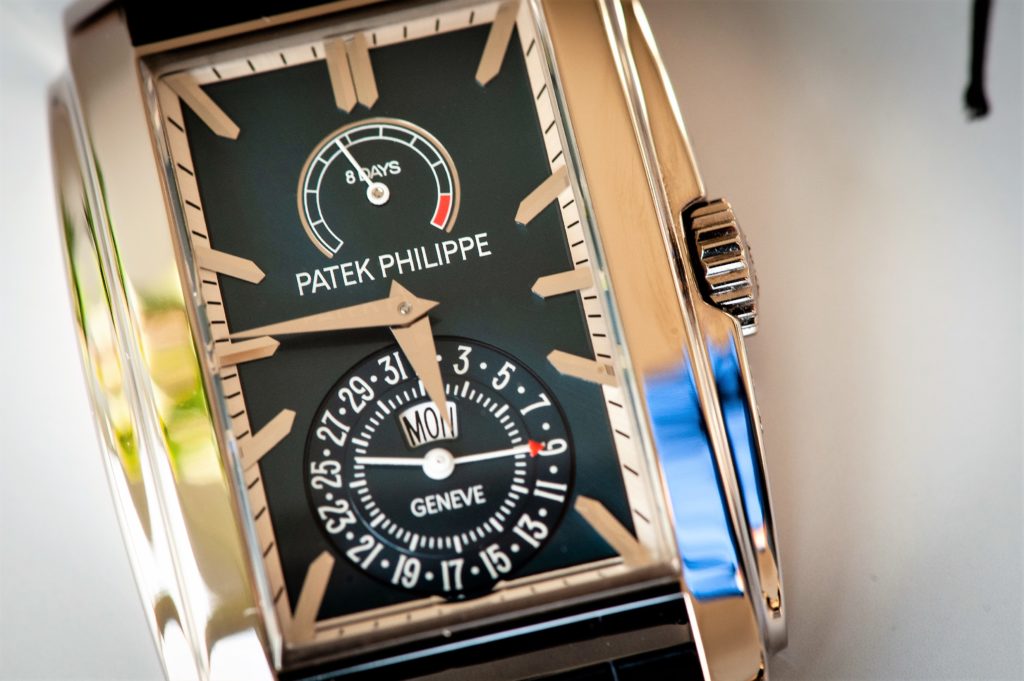 Inspiration from the earlier Art Deco period is also reflected in the dial as the Dauphine hands and the baton indexes, both of which are faceted, unmistakably lead my thoughts to the Art Deco period with their distinct designs. These elements are, like the case and prong buckle, executed in 18kt white gold, whereas the dial is made of brass, all of which contributes to the discrete elegance of the watch. That being said, the blue ‘’sunburst’’ dial causes the watch to be suitable for casual as well as formal wear, whereas the white dial version would appear to belong in a formal setting. 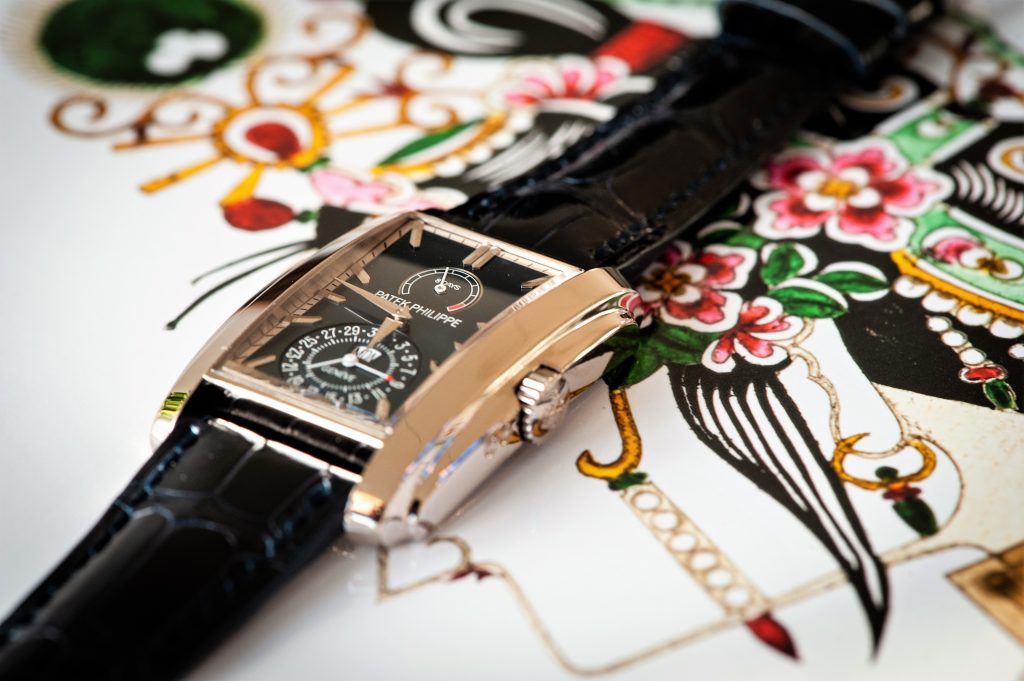 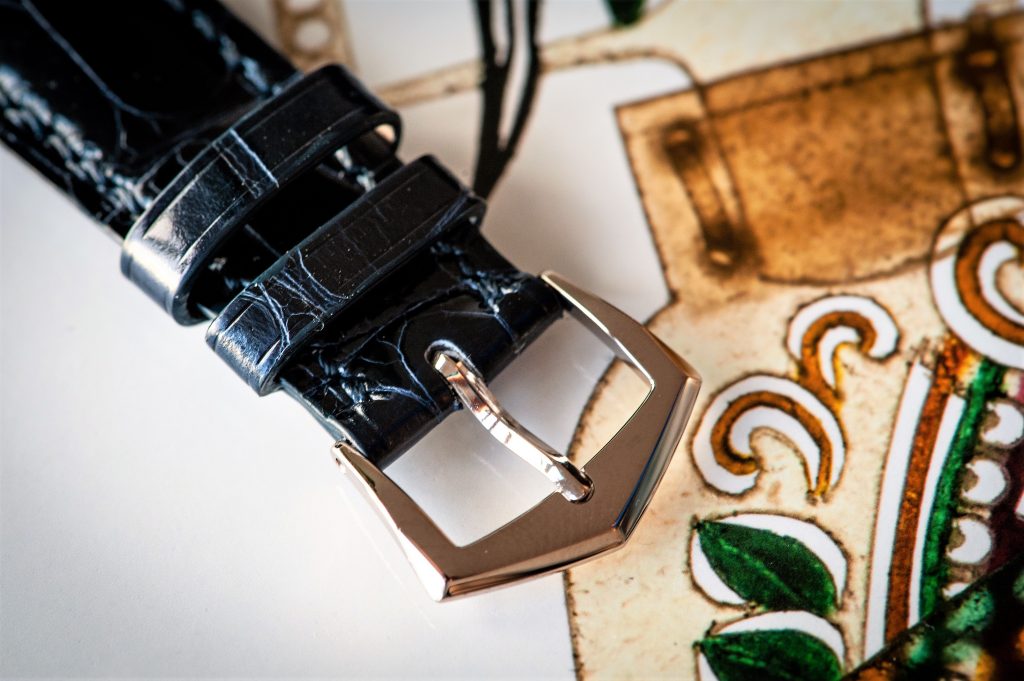 The finish of the case is well-executed and almost feels soft when sliding your fingers over it – just like the curves of a Jaguar E-Type. In a way, this is very interesting as we are talking about a precious metal. It is worth noticing that the case was designed from a single gold bar by using cold forming technology where the case subsequently was processed manually by hand during a several-hour process – all under the observation of a number of strict requirements, in order to make sure that the entire product, including the 16mm prong buckle and the shiny blue handstitched alligator strap, could eventually be certified with Patek Philippe’s own quality seal which was introduced back in mid-2009. Previously, all Patek Philippe timepieces had ’’merely’’ to meet the Geneva Seal criteria, which at the time only covered the calibre itself. 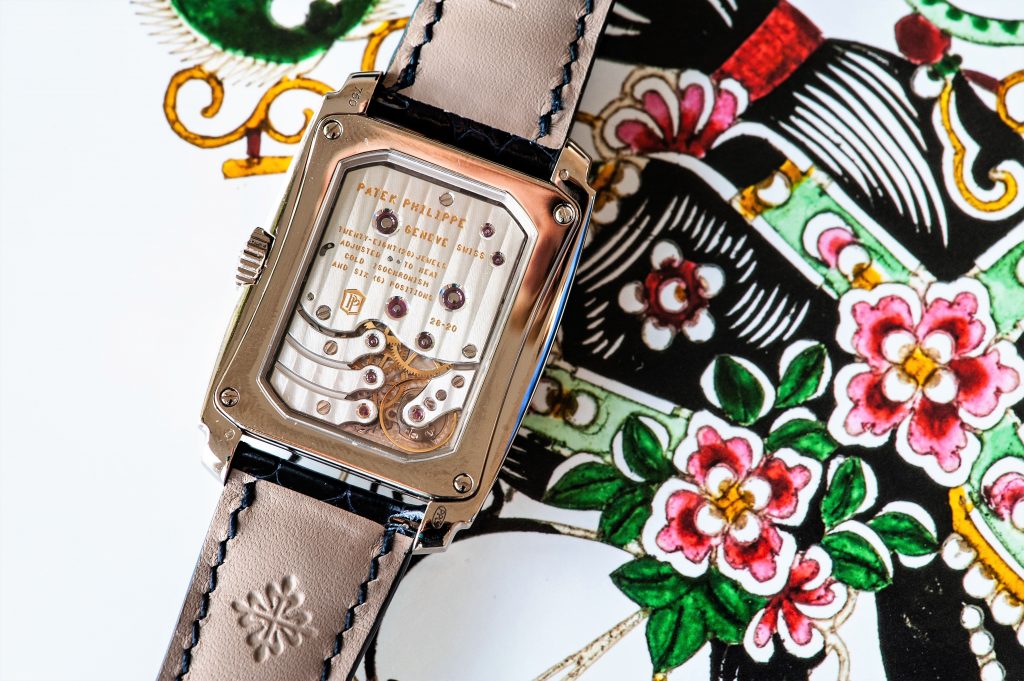 In continuation of our review, it must be added that the watch comes with a convex sapphire crystal on the front, while you are offered a glance at the lovely calibre 28-20REC 8J PS IRM C J) due to the concave sapphire-crystal display back that has been secured to the case by four screws, also in white gold.

Personally, I am in favour of care being spent on both time as well as cost consuming details. In addition to the fact that the watch looks better in real life. It appears large on various model images but it actually feels compact almost in the same way as A. Lange & Söhne’s Arkade. However, that being said, the circle of potential buyers reduces as soon as you move away from the classic, round, 39mm-41mm diameter watch design. 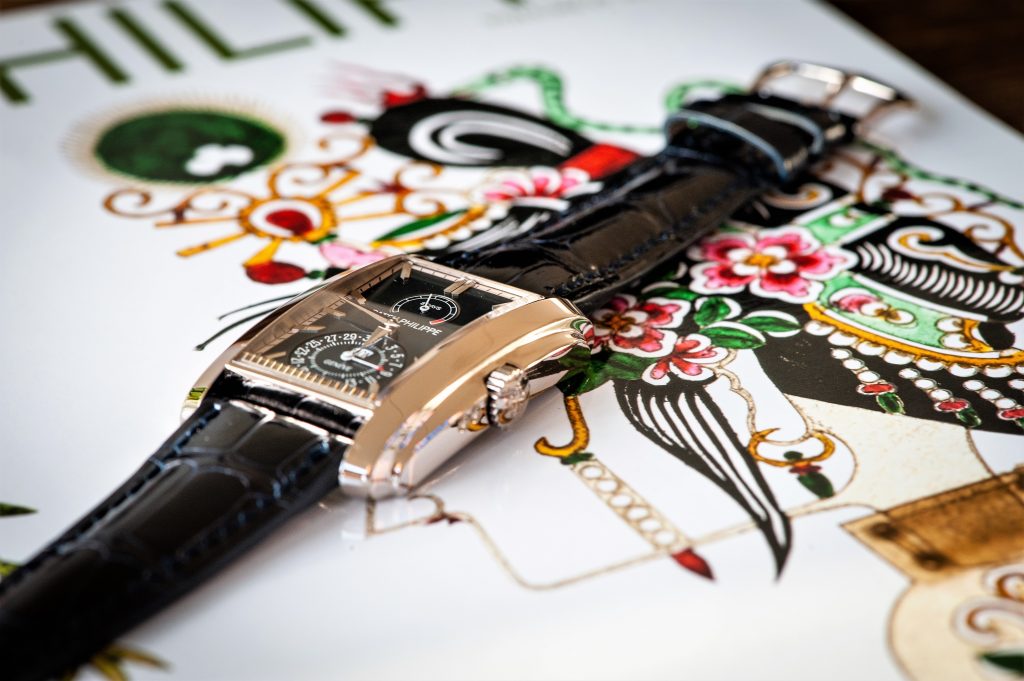 That aside, there is definitely a market for this type of watch as it offers something unique which the keener collectors give a hearty reception contrary to the speculators who primarily focus on the popular stainless-steel models from the Nautilus collection, especially Ref. 5711 and Ref. 5712. In addition, the Art Deco-inspired design is not necessarily received well by all the hardcore aficionados as not all sense the presence of nostalgia – the Prohibition, Italian men in tailored suits and even the iconic Chrysler building – which is why the market for this type of watch is further narrowed down. However, it is worth mentioning that the Gondolo collection, to which this model belonged for five years, was introduced in 1993, which is why it gave rise to a certain amount of surprise that Patek Philippe did not jump at the opportunity of celebrating the 25’th anniversary of this collection at Baselworld 2018, but instead celebrated the 50’th anniversary of the Ellipse collection which, in spite of everything, is more old-fashioned in its expression.

It should also be noted that Thierry Stern, in an interview previously available on YouTube, said that this model will not be produced in ’’big, big quantities’’ – and, in a way, these factors contribute – at least in my opinion – as to why the timepiece can be considered an underdog. The limited production was probably connected to the processing of the aforementioned anatomically curved case and sapphire crystals as the only actual disadvantage – depending on your point of view – is the one accounted for below.

If we turn our attention to the manually wound calibre, the observant reader will soon notice that the calibre only features two bridges, in spite of the fact that you are lead to believe otherwise as the second bridge has been milled down to look like three bridges, just like the calibre of its predecessor which was introduced 18 years ago in the form of Ref. 5100 and later followed by a world debut, viz. Ref. 5101, which offered an entire ten days of autonomy and a tourbillon in one single calibre. 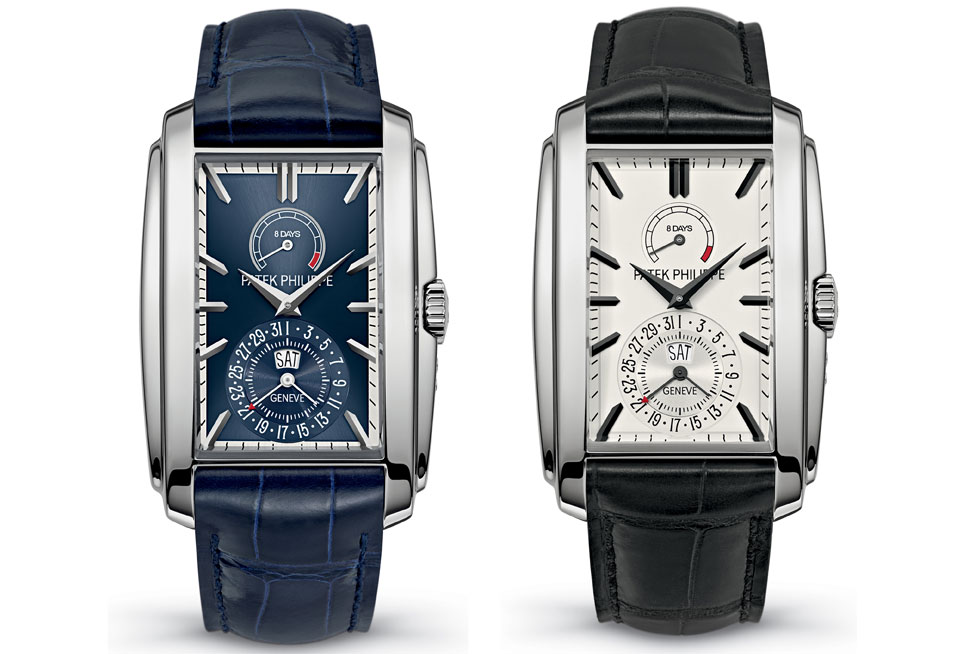 In this connection, it may be a surprise to you that Patek Philippe chose an apparently cheap solution when the remainder of the watch is really exquisite. That choice, however, advocates – according to some of our colleagues in Holland – the advantage that it is not only increasingly rigid, but also easier to service – and that may, depending on the circumstances, be advantageous, provided you wish to wear it daily. If, on the other hand, you are a purist, it might not suit your fancy, especially if you are the lucky owner of a Ref. 5100.

In addition to the benefits of the innovative silicon-based Silinvar material, the Ref. 5200 has more in common with its predecessor, and that is the actual calibre as calibre 28-20REC 8J PS IRM C J is a further development of calibre 28-20/222, though in a somewhat upgraded version. Because it is Patek Philippe’s first watch with the their patented oscilator with a Spiromax balance spring and a Pulsomax escapement, for which they leveraged the benefits of the innovative silicon-based Silinvar material, and with a frequency of 4 Hz – as opposed to the predecessor’s 3 Hz.

The Pulsomax escapement with Silinvar lever and escape wheel needs no lubrication and reduces the friction to such an extent that it is almost of no relevance, and that saves energy each time the lever contacts the escape wheel. This is very impressive as this happens 5.53m times, provided that the watch’s eight-day power reserve is exploited to its full. In addition, the Silinvar material is not only corrosion resistant and antimagnetic, but it is also very durable and still 2/3 lighter than steel, which further optimises the energy balance. Depending on the angle, you will be able to recognise these components on their purple-to-bluish hue. 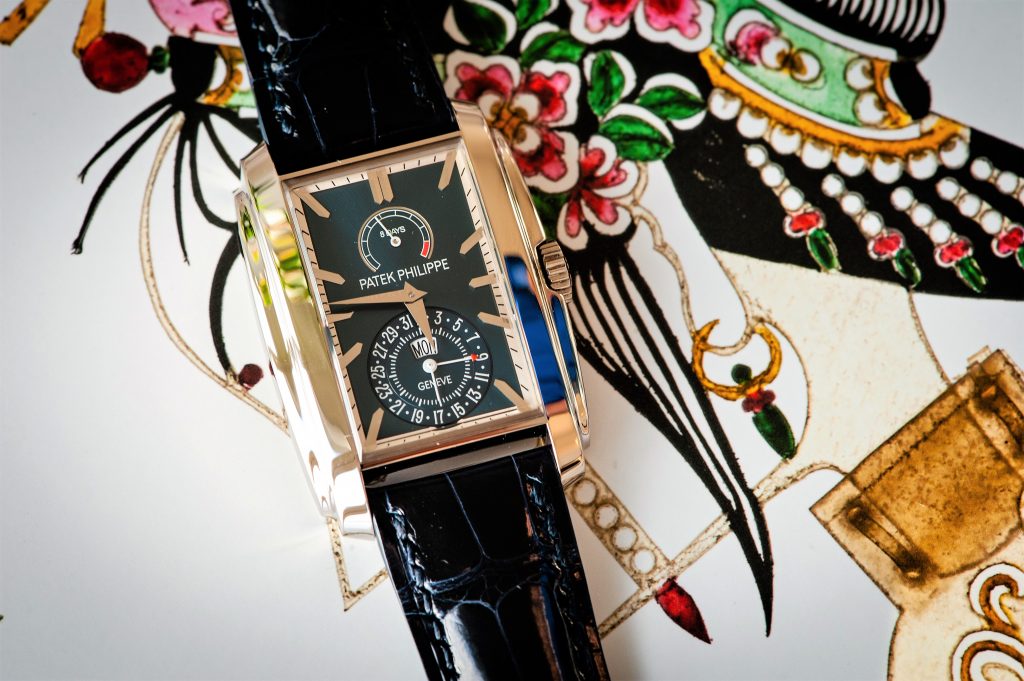 In addition, the Ref. 5200 enables you to have track of date and day for the following eight days, provided of course that you are prepared to wind the crown 134 times – as opposed to its predecessor which ’’only’’ required approx. 100 turns. In this connection, it must be added that date and day change takes place instantaneously within three milliseconds of the hands passing midnight – and this seemingly simple function is surprisingly energy consuming, and the power reserve here is therefore 20% lower than that of its predecessor. That being said, the calibre 28-20 REC 8J PS IRM C J is – in spite of the extra complications – just as high as that of its predecessor, viz. 5.05mm. Personally, I favour an instantaneous date and day change mechanism as I, in a way, find it rather satisfying to see the date indicators change at the stroke of midnight or immediately after, and I wish that far more watch manufacturers would include this feature.

Apart from being technically advanced, it comes with the usual superb finish as you would expect from Patek Philippe. It comes with hand-finished Côtes de Genéve across the bridges and balance cock, the bridges and the screw recesses in the steel parts have been polished according to very strict standards where no deviation whatsoever is tolerated. Furthermore, the engravings on the bridges are, together with the Patek Philippe seal, finely gilded, and even though calibre 28-20REC 8J PS IRM C does not feature any gold chatons, as is the case of the calibre 28-20/220, which would have improved the visual impression of this fascinating calibre, it does not look too shabby at all in the end. The edges of the bridges have been chamfered and polished too. Please note that this list is by no means exhaustive, and its sole intention is to demonstrate what you get when buying a Patek Philippe with a mechanical calibre. 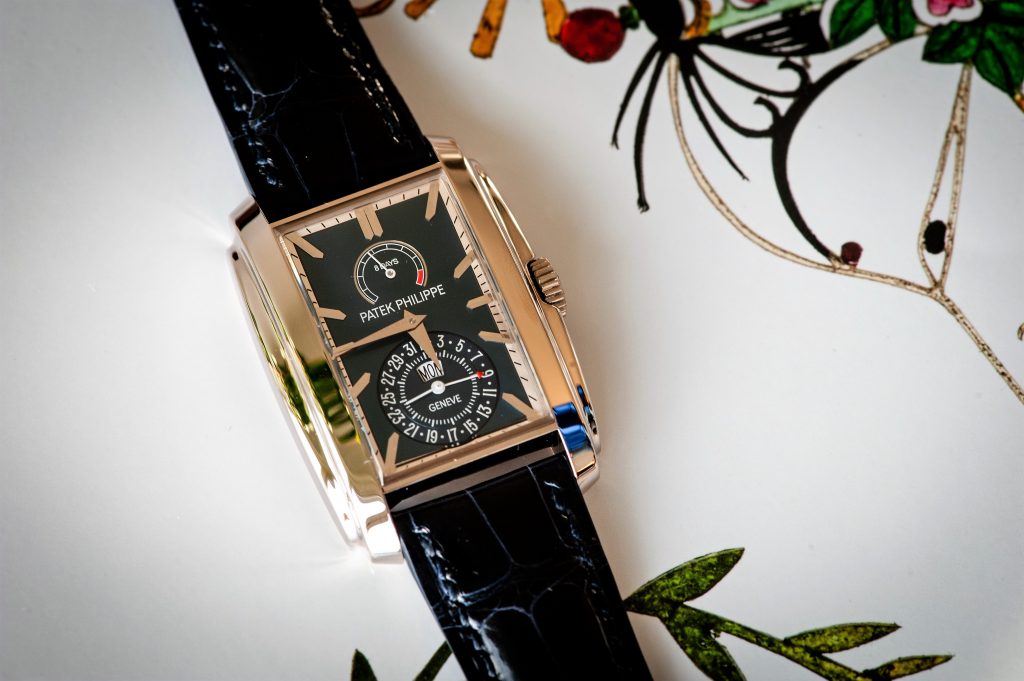 If you are wondering about the name of the calibre, REC indicates that the calibre is rectangular, whereas PS indicates that seconds are shown on a small seconds dial. 8J refers to the eight-day power reserve, whereas IRM indicates the time left during which the mechanical calibre of the watch can continue without being wound using the crown. C, of course, indicates that the watch features a calendar – however it’s neither an annual calendar nor a perpetual calendar, which is why you have to adjust the date and day five times a year. This can be done manually by operating the crown or by using the not so appealing dimples on the right side of the case. The case measures 46.90mm across the lugs and 32.4mm across the case (excluding the crown), and the thickness is stated to be 10.40mm. It thus wears quite comfortably and will easily slide under a shirt or jacket cuff. 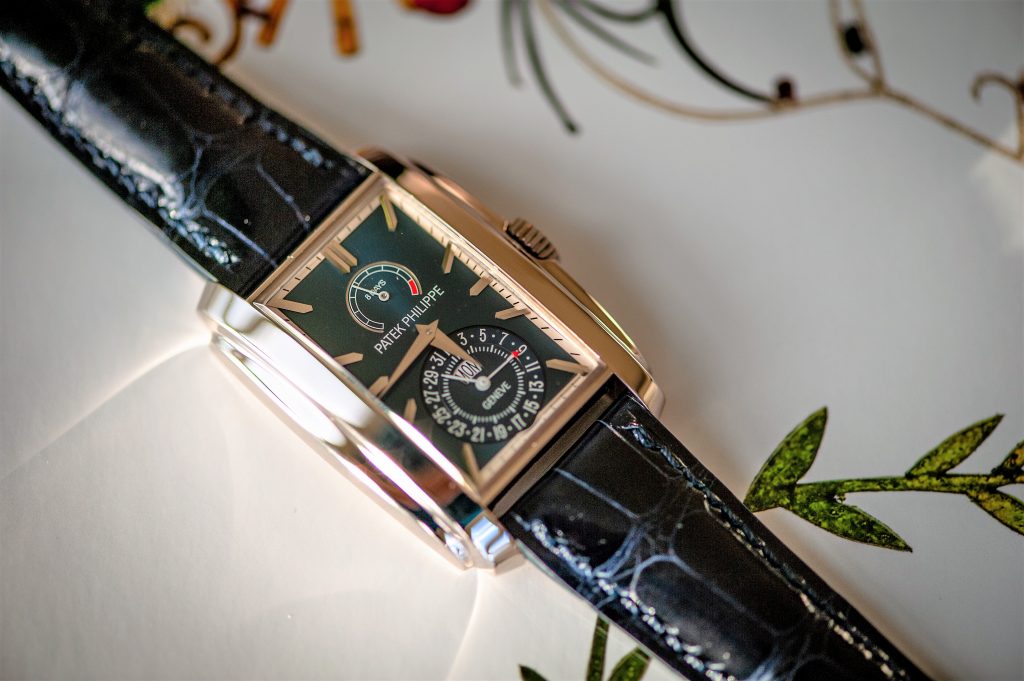 Now we have reached one of the less fun aspects of high-end watch making – the price. The price for this magnificent timepiece was at the time of its introduction 44,800 euros, which is indeed a lot of money – but you also got your money’s worth when comparing it to more expensive models from Patek Phillippe, such as the 5170 or the 5980. In addition, Patekf Philippe did not come up with any new or ground-breaking models that year, unless we disregard Ref. 5004, executed in titanium for the Only Watch auction, and I for one find it rather odd that Ref. 5200 did not receive more attention at the Basel show. Based on the above I therefore find it to be an interesting alternative, which is why I would recommend anyone thinking about adding another Patek Philippe to their collection to go for it – instead of the more safe choice which obviously is a Nautilus or Aquanaut.

A special thank you to the professional photographer, J. F. Sørensen