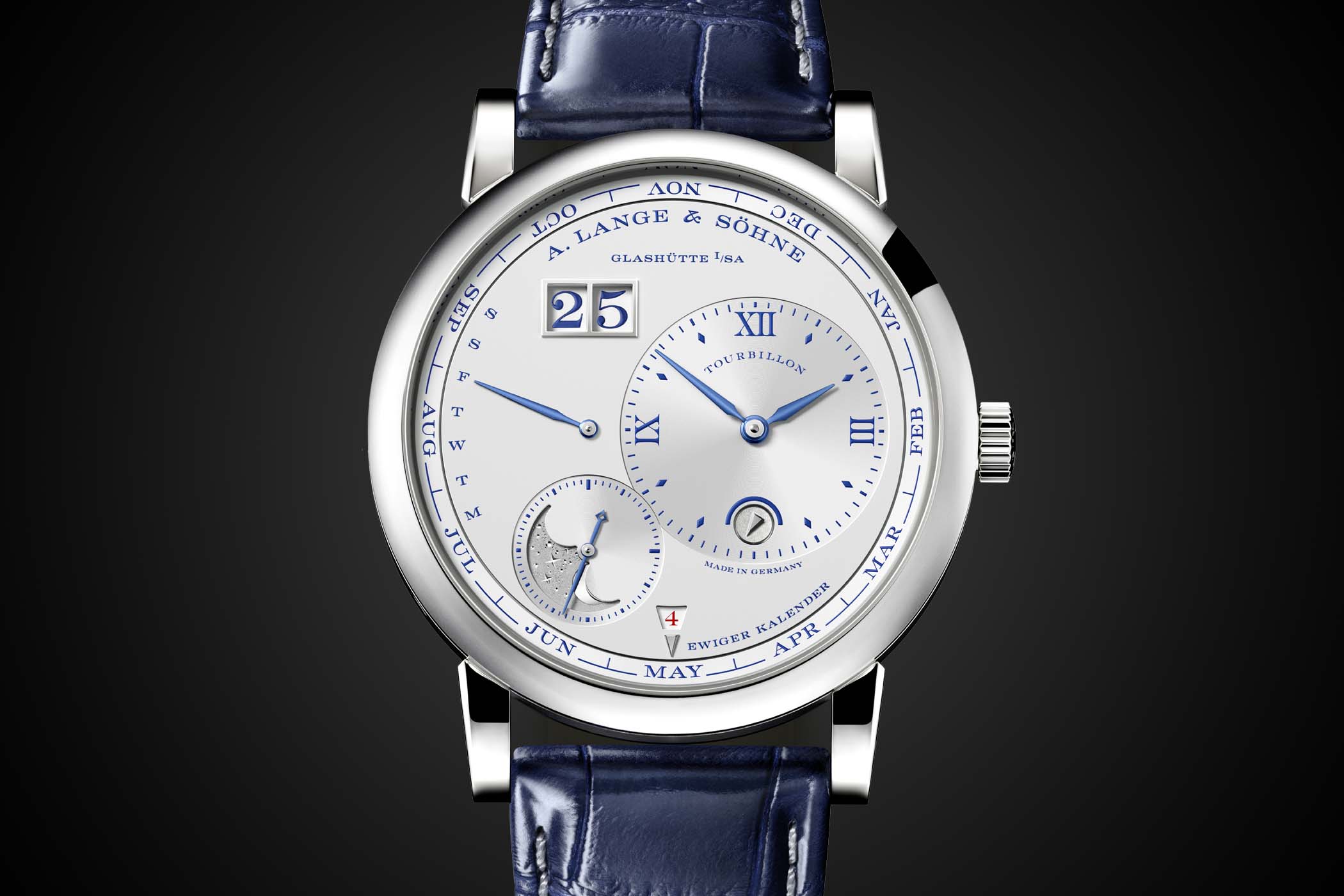 To celebrate the 25th anniversary of A. Lange & Söhne, the brand is unveiling a new birthday present to itself on the 24th of every month this year up until October. That means that once a month, every month, we get to see a new watch with anniversary colours on it. This time around, it’s the turn of one of the big daddies of the collection, the Lange 1 Tourbillon Perpetual Calendar.

You may remember last month we showed you the Little Lange 1 25th Anniversary model. The Little Lange 1 is the smallest of the collection, as the name suggests, and is primarily a women’s watch. This one is most definitely not a little watch, though it’s not as huge as you’d expect. As you know, complicated watches from A. Lange & Söhne are usually large in diameter and very thick. However, this one is 41.9mm in diameter and 12.2mm thick. Compared to some other models of theirs, that’s rather good. The case is made of 18K white gold as one would suspect. 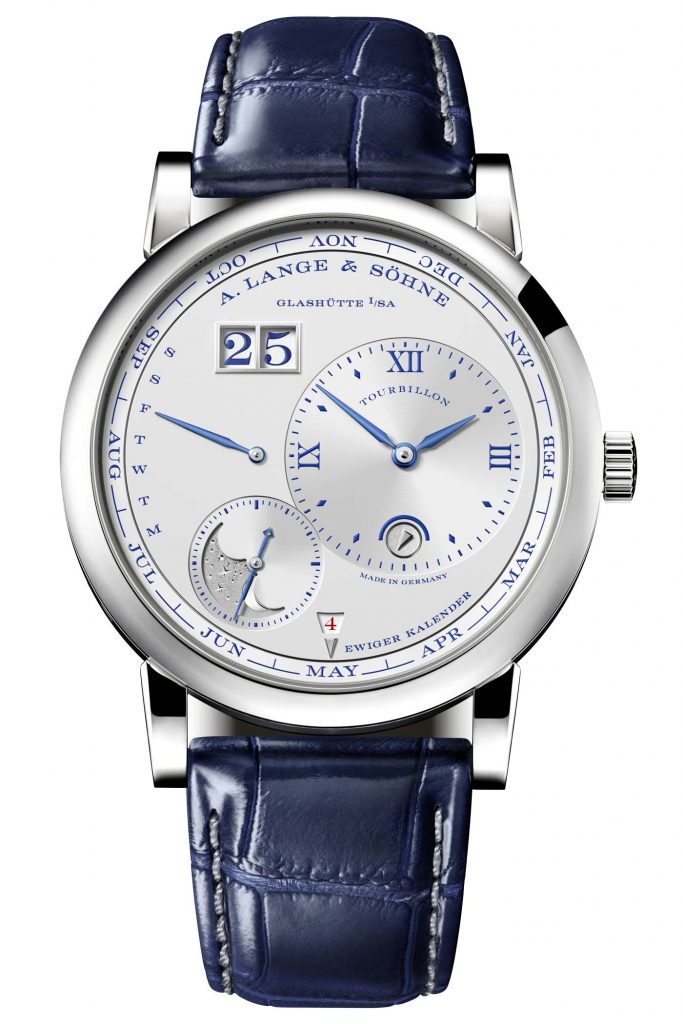 The dial is, like the rest of the 25th Anniversary collection, a solid silver affair with argenté decoration, blue hands and blue markers, the layout has not changed from the non-birthday related Lange 1 Tourbillon Perpetual Calendar. It still has the German words ‘Ewiger Kalender’, which when literally translated means ‘endless calendar’, which is of course what a perpetual calendar is, it never needs interaction unless the watch stops. It’s a beautiful display on this one, quite subtle and easily missed. You won’t miss that silver moonphase, though, it’s impressive, to say the least.

This watch is based on the Lange 1 Daymatic. The way to tell this is quite subtle, instead of there being an Up/Down power reserve indicator there is instead a day of the week indicator in its place, looking nearly identical. If that was too subtle for you, note as well that the dial has been reversed, so the time is on the right-hand side, where it is usually on the left. 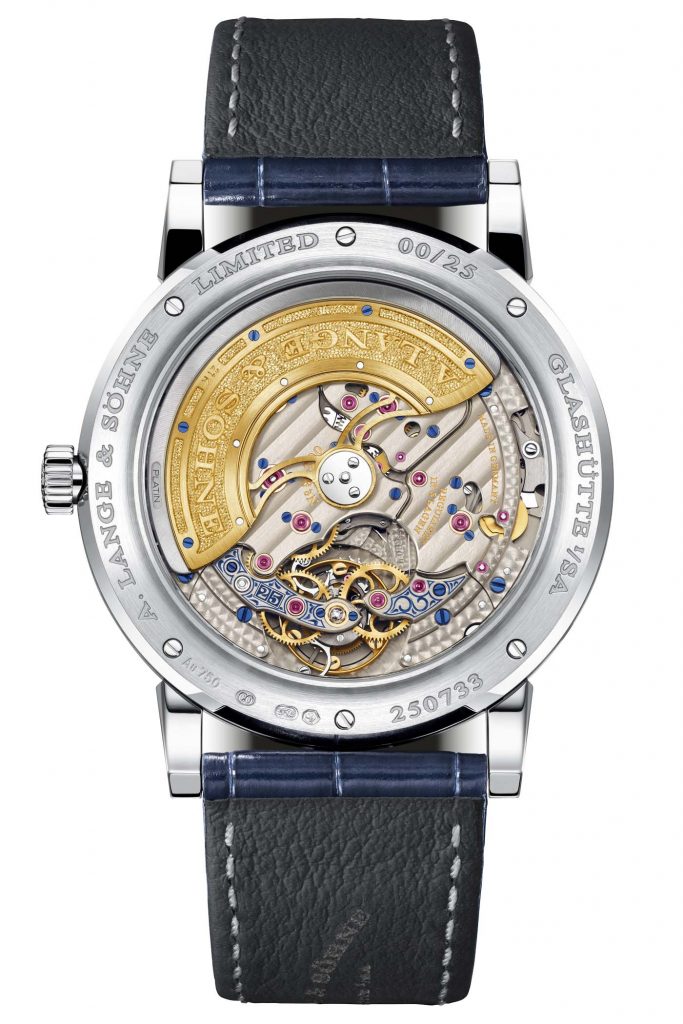 The movement around the back is open to viewing, but there is a large central rotor made of solid gold and platinum swinging above it. This watch kept the Daymatic’s winding system too. The bridge for the tourbillon is, in fact, a cock, though you need to look closer to see that. It’s been given the blue filled engraving with the 25 symbol on it as well. I wonder why brands don’t do this more often, engrave and then fill the patterns with bright paint. It’s certainly a different appearance!