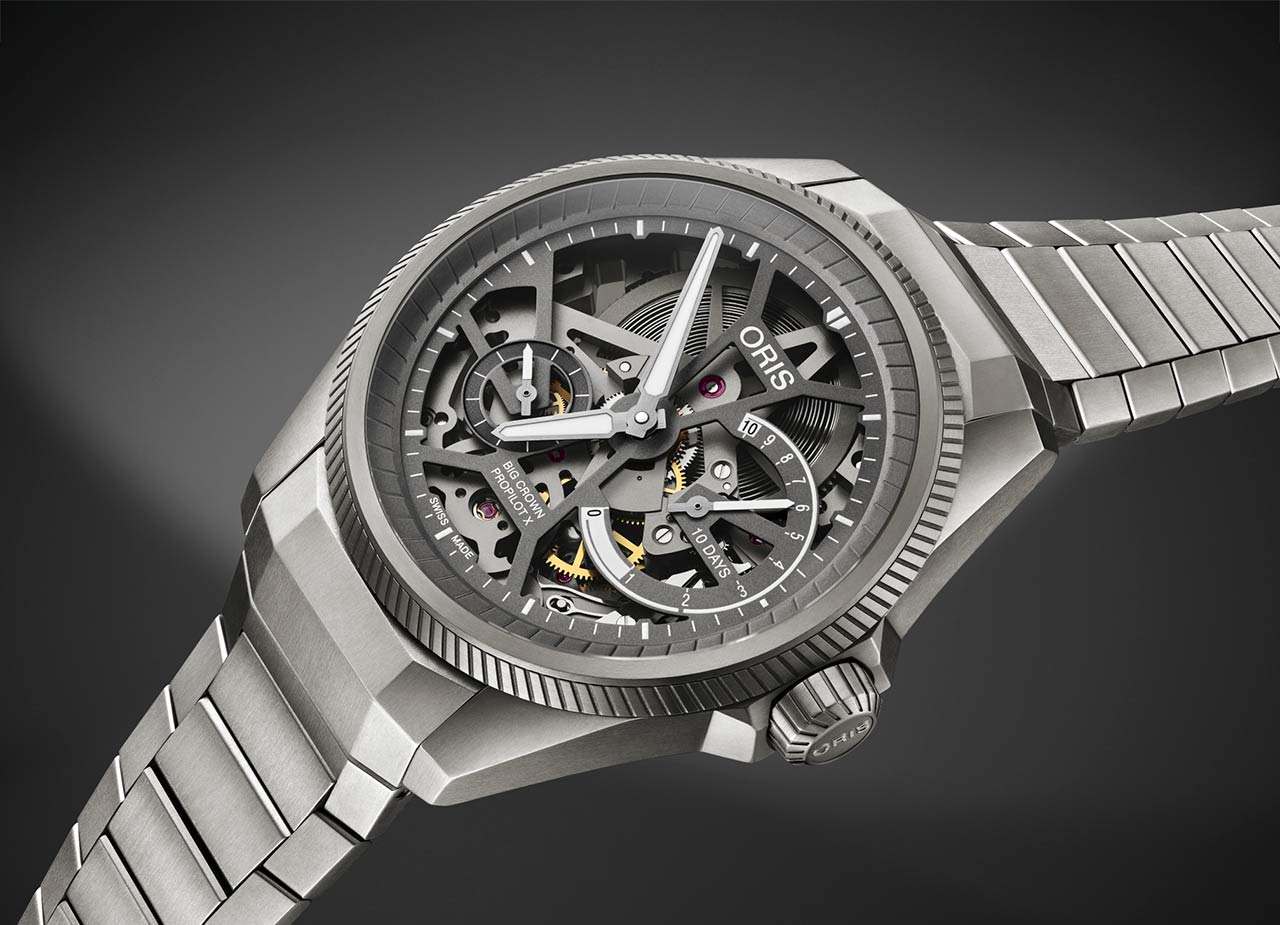 Oris brought its watchmaking skills into the limelight when it released the fully in-house caliber 110 in 2014 to celebrate its 110th anniversary. After five years of constant evolution, Oris has now given the Caliber its biggest and boldest ever makeover. Aptly named the Caliber 115, the fifth iteration of the caliber 110, is aimed at highlighting the complex and beautiful intricacies of this technical powerhouse. Bringing this new open-worked movement to the wrist is the new Oris Big Crown Pro Pilot X a bold and aggressive Pilots watch constructed entirely using titanium. 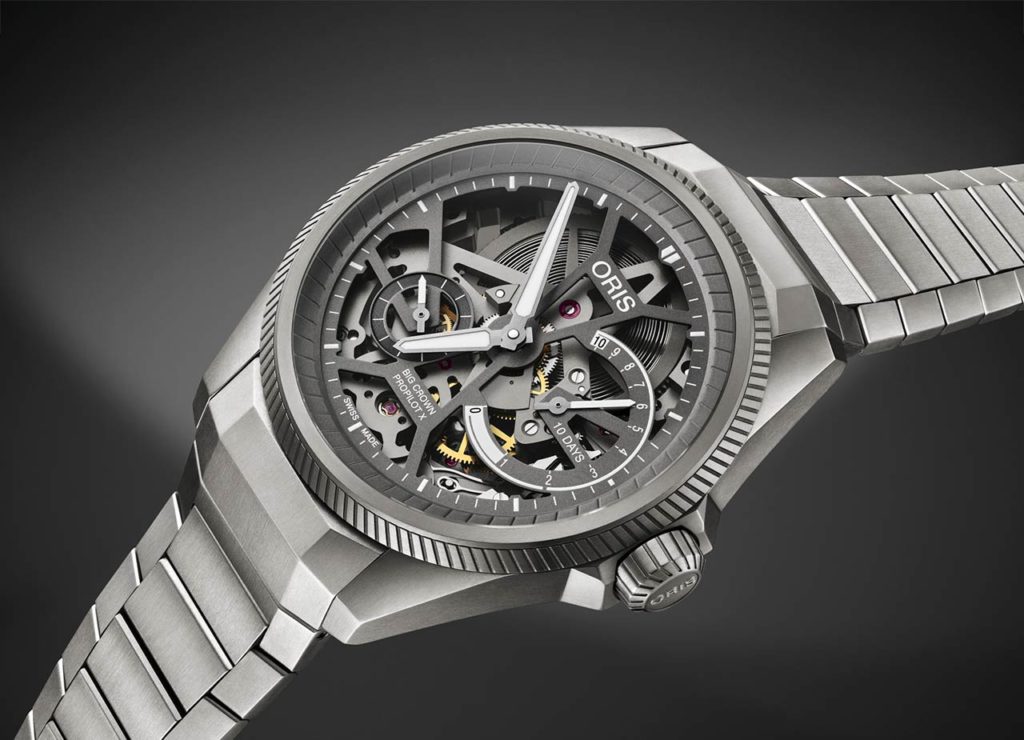 Skeletonization is a tricky affair. If executed well it’s a visual delight, but if overdone or underdone it ends up being an eyesore. The Oris Big Crown Pro Pilot X thankfully falls in the former camp. To showcase the complexity of its internals, Oris has thoughtfully carved out the caliber 110 with some nice attention to detail. Almost all moving parts can be seen in action and even the barrel at 12 O’clock has been exposed to view the functioning of the extended mainspring. When the watch is wound the mainspring coils can be seen getting tighter on each wind till the movement is fully wound.

Legibility is an aspect which usually gets compromised in skeletonized watches, but Oris has taken good measures to keep this watch readable. The main dial plate which has been cut out to expose the movement has been presented in a nice anthracite shade which manages to stand out well against the mechanical backdrop. Additionally, all markings on the dial have been rendered in white to provide a nice contrast and to make it easier to read the time. The handset and 5-minute markings have also been treated with luminous material to ensure good nighttime visibility. 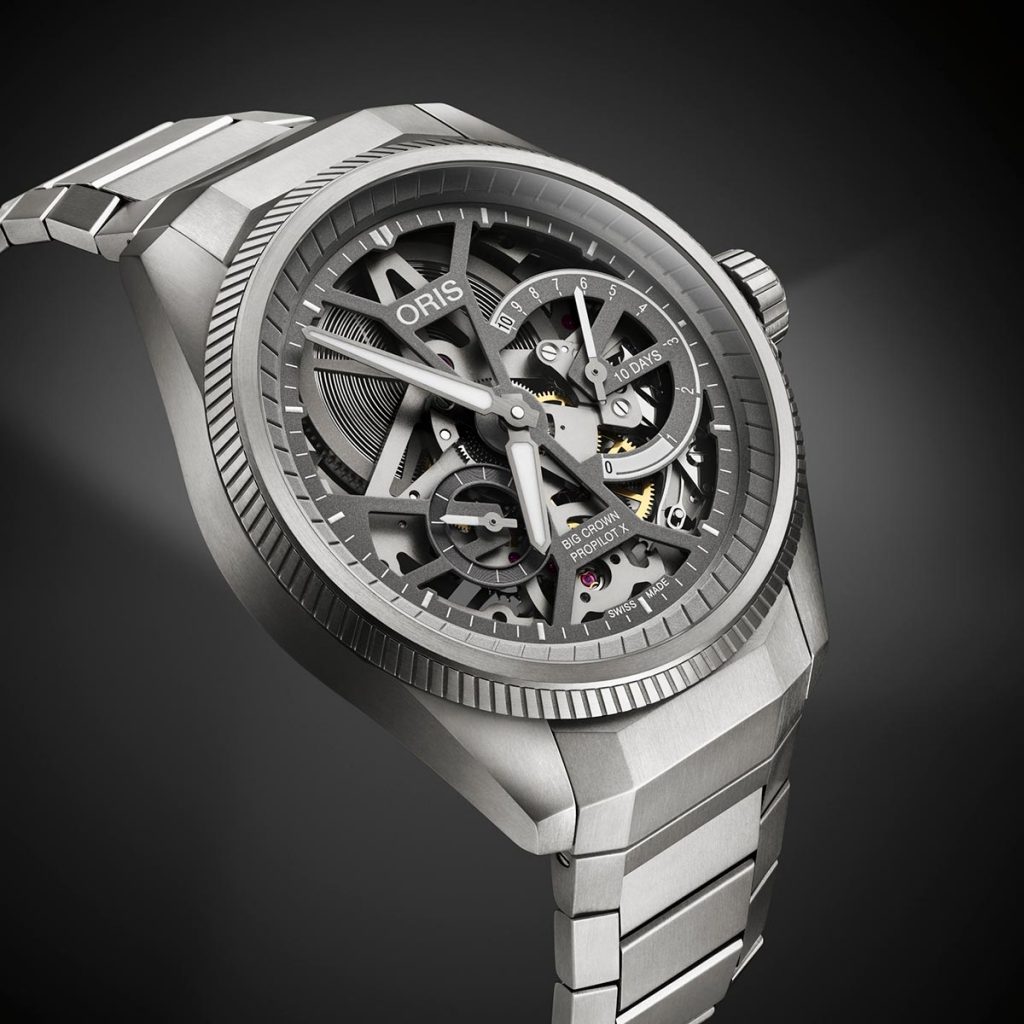 To complement the Caliber 115, Oris has chosen the sporty Pro Pilot family. Measuring 44 mm in diameter the case is constructed using titanium making for a lightweight watch that would offer a great presence on the wrist. The case also showcases the aviation roots of this watch through the turbine-style knurling which is present on the front of the bezel, the case back and even the threaded crown at 3 which ensures the 100-meter water resistance. The case comes attached to an integrated bracelet which is also made from titanium and gives the watch a cohesive look.

The Oris Big Crown Pro Pilot X is a big step forward for the brand and exemplifies its horological might. The retail price of this beast is set at CHF 7,200.