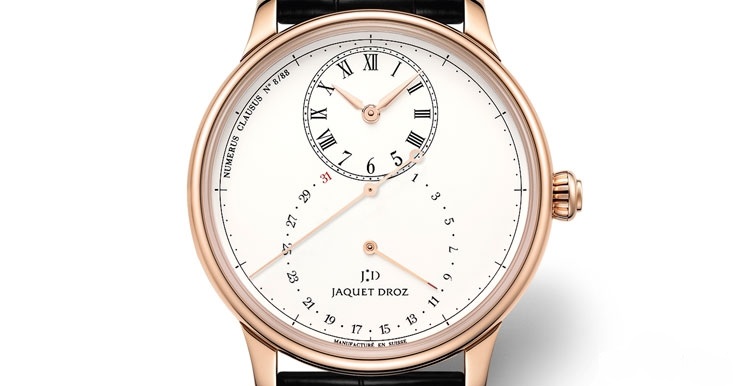 The first thing that one would notice from looking at the Jaquet Droz Grande Seconde Deadbeat watch for the first time is the vast empty space of the dial. The hands, the digits as well as the markers are uncharacteristically not to the proportion expected for a watch of such size. For the uninitiated, this minimalist approach presents a big negative in their eyes as a functional watch.

Only those with the knowledge of horology can appreciate what Jaquet Droz was trying to accomplish with this creation. 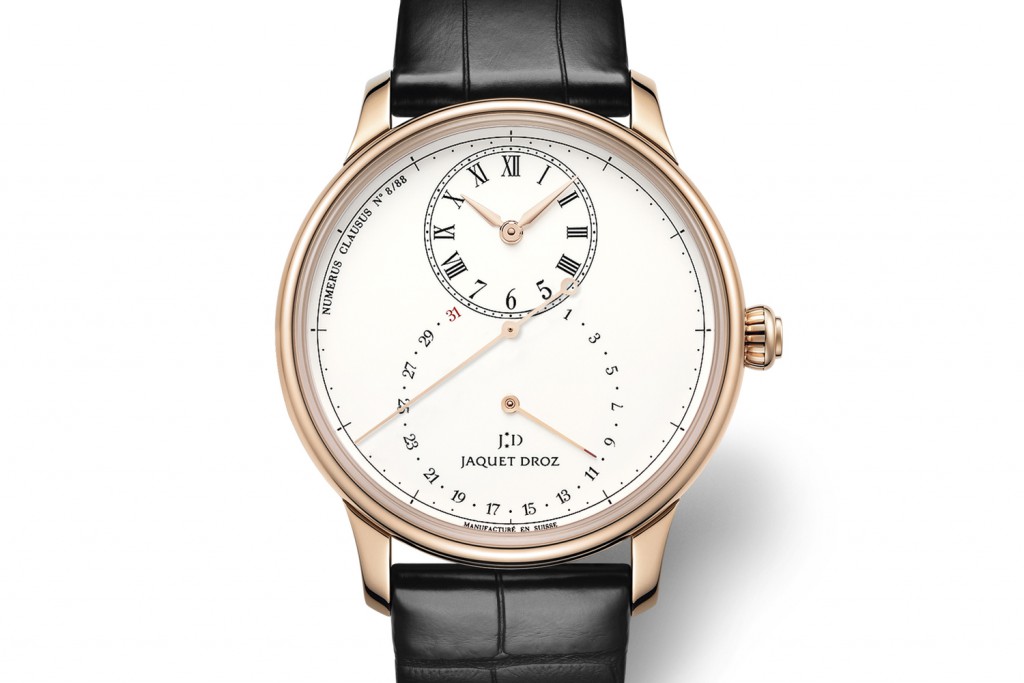 This watch was created to act like regulator clocks. These are special clocks designed specifically to help regulate the time of other clocks or to be used for timing scientific experiments due to its accuracy. It has a deadbeat seconds complication i.e. a ticking seconds hand. 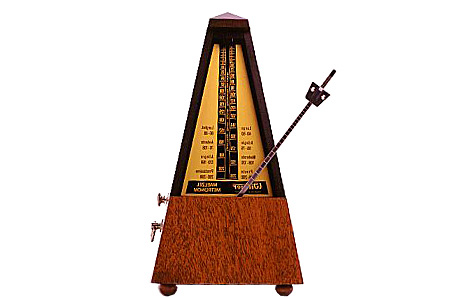 This ‘ticking’ movement is generally seen on quartz watches. Due to the romantic notion that ‘only mechanical’ watches can provide sweeping movement and elegance, the benefit of a ticking hand has been forgotten by a lot of people. Historically, the ticking hand regulator watches act like a metronome, consistent and precise in timing. 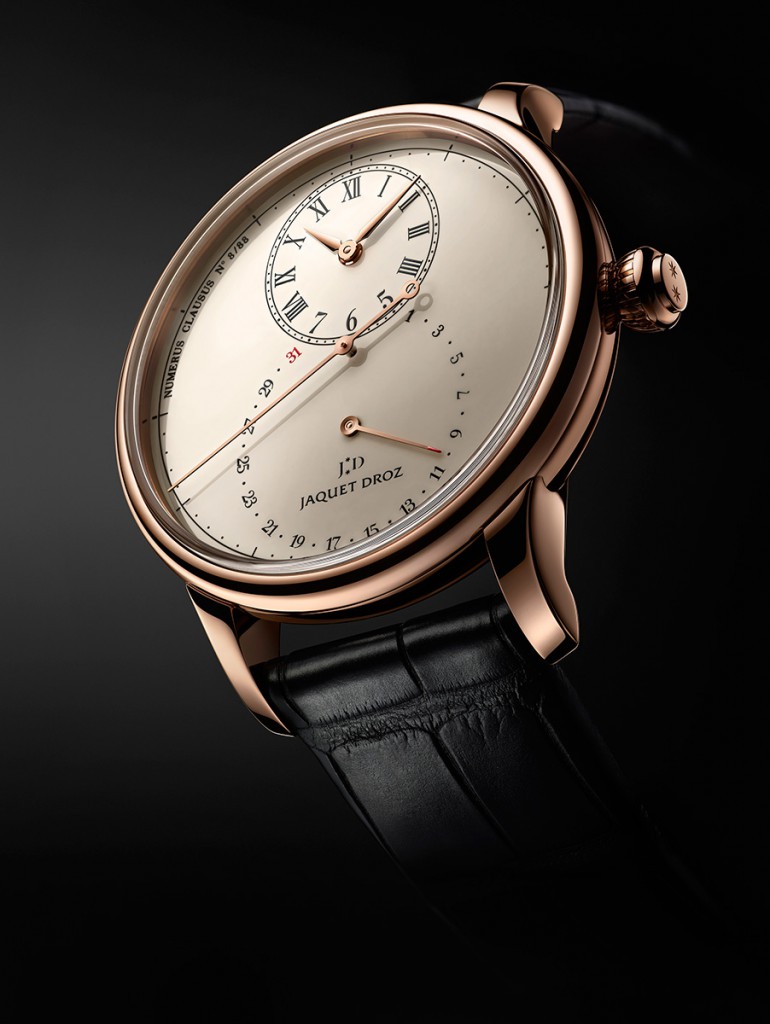 The Jaquet Droz Grande Seconde Deadbeat has a sub-dial clock face near 12 o’clock with small minutes and hours hands. The sub-dial is printed with Roman numerals apart from position 5, 6 and 7 which is Arabic. The second and much larger sub-dial near the 6 o’clock is the indicator dial for the date. The pointer-date hand is a retrograde hand that requires it to ‘jump’ from the end of the scale back to the start of the scale. This sub-dial uses a combination of Arabic numbers and markers. Meanwhile, the center of the dial is the ticking central seconds hand. On the scale for the central seconds hand are minute markers. Between 9 to 11 o’clock on the central seconds hand scale, Jaquet Droz decided to put some text which eliminated 10 minutes worth of markers.

From a visual point of view, the additional text on the central seconds hand scale and the use of some Arabic numbering on the clock sub-dial ruined its reputation of being a true regulator of watches.

Trying to put “Numerus Closus X/XX” (in Latin meaning ‘Closed Number X/XX’) on the scale is like putting a tattoo saying “I’m beautiful” on one’s face; unnecessary and very condescending . Why can’t Jaquet Droz just put that statement on any other part of the empty dial?

Moreover, the use of Arabic numbering on the part of clock sub-dial that crosses the second sub-dial is also irrelevant. If the font size is similar or uses the same number and marker combination, than fine but as it is, there is no obvious justification for doing so. 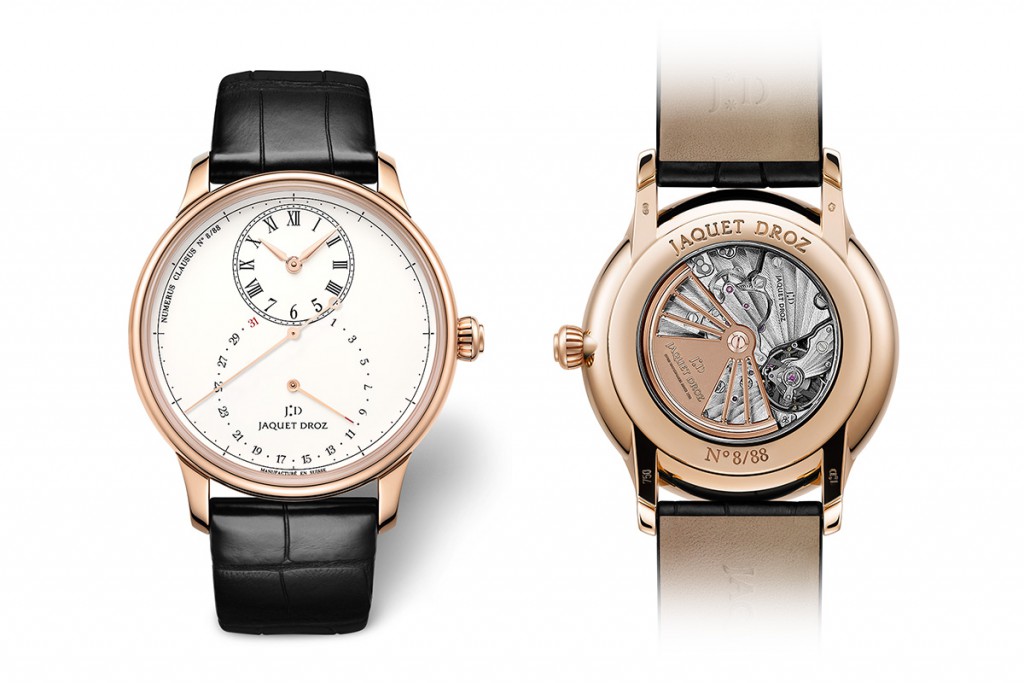 This is a limited edition watch of just 88 pieces.  The watch is 43 mm in diameter and 13.79 mm thick. Protected by sapphire crystal on both the front dial as well as on the display case-back. Case is made out of 18K red gold.

The movement that powers this watch is the Jaquet Droz calibre 2695SMR. This automatic movement uses a balance-spring made of silicon, a material that is unaffected by magnetic fields or changes in temperature and pressure. This ensures accurate timekeeping. It has a single barrel with 40 hours of power reserve. The rotor on this movement is also made out of 18K red gold.

I don’t doubt the accuracy of this timepiece. However, the visual over-embellishment on the dial diminishes it credibility as an accurate watch. If you are going for a high precision tool, dress it as such. Don’t bedazzle it. For more info, please visit jaquet-droz.com