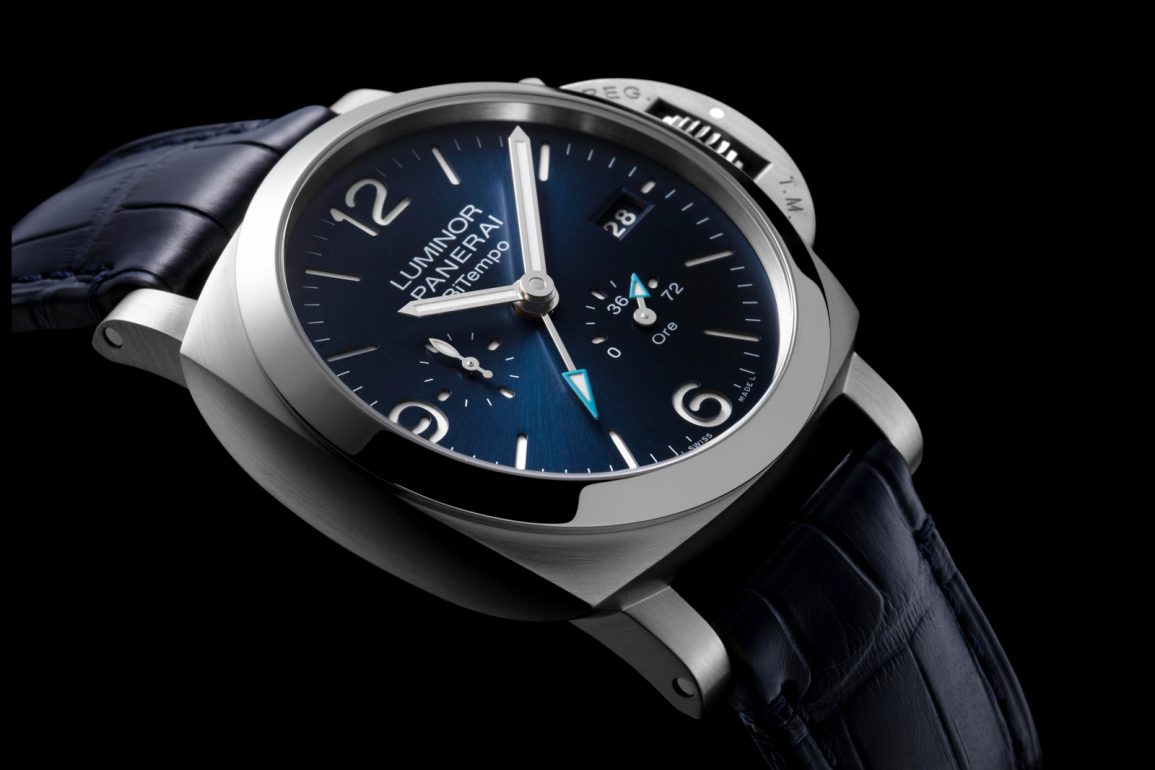 Panerai's BiTempo replaces the old Luminor GMT and looks smart while doing it.

Panerai’s unique philosophy of watch design is based on the sheer-nosed simplicity of its designs, which is both good and bad. It’s bad because when your designs are so simple but so popular, there’s little reason to see if you can broaden your talents. Also, it makes the job of so-called “super fakers” much easier. However, the positives of the scaled-back simplistic approach include a timeless appearance that’s instantly recognisable. 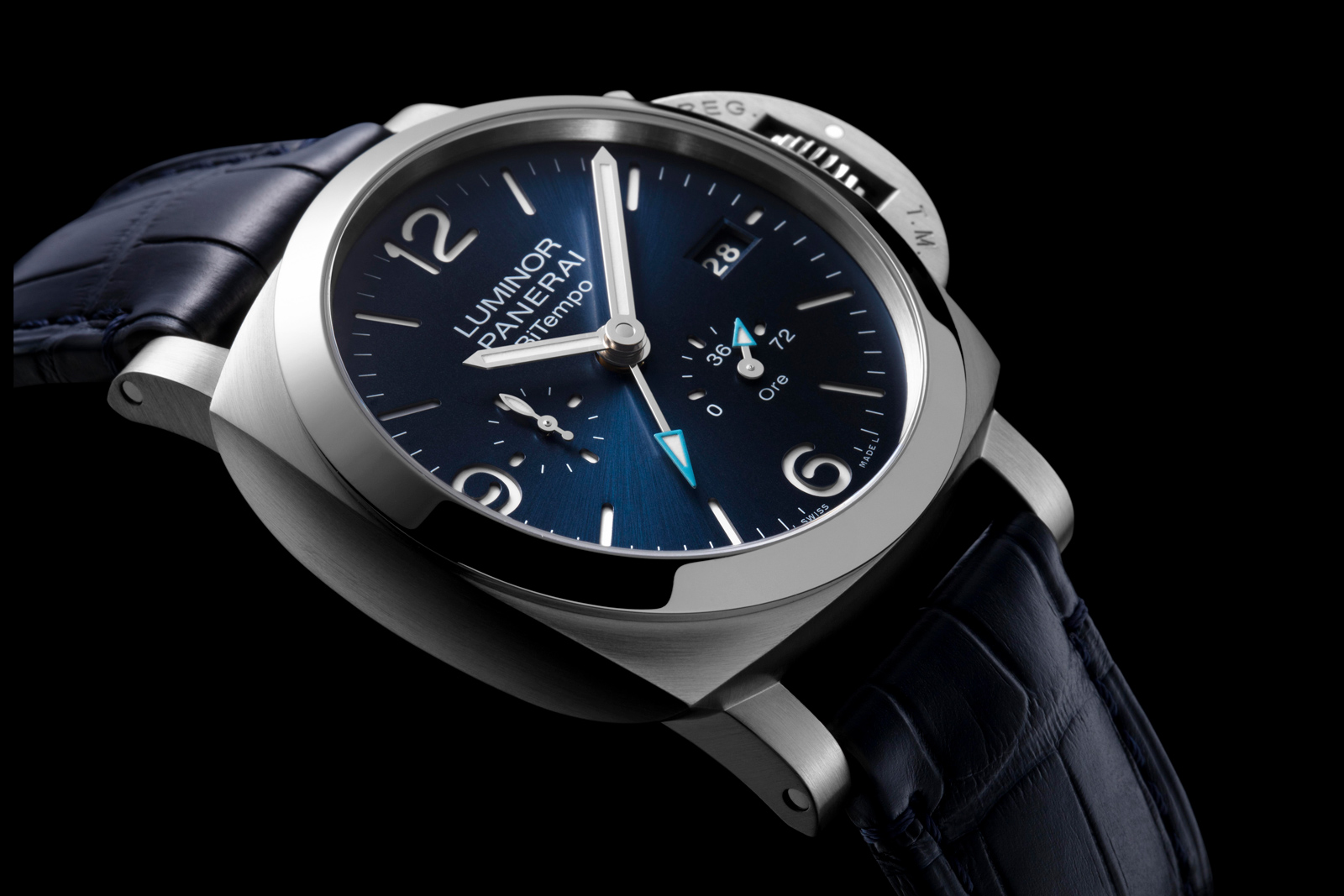 Intriguingly, in some ways, the simplistic design theme also forces designers to get creative in other ways, despite my point in the previous paragraph mentioning how little wiggle room there is. A case in point is the new Luminor BiTempo, which is a dual-time watch from Panerai. 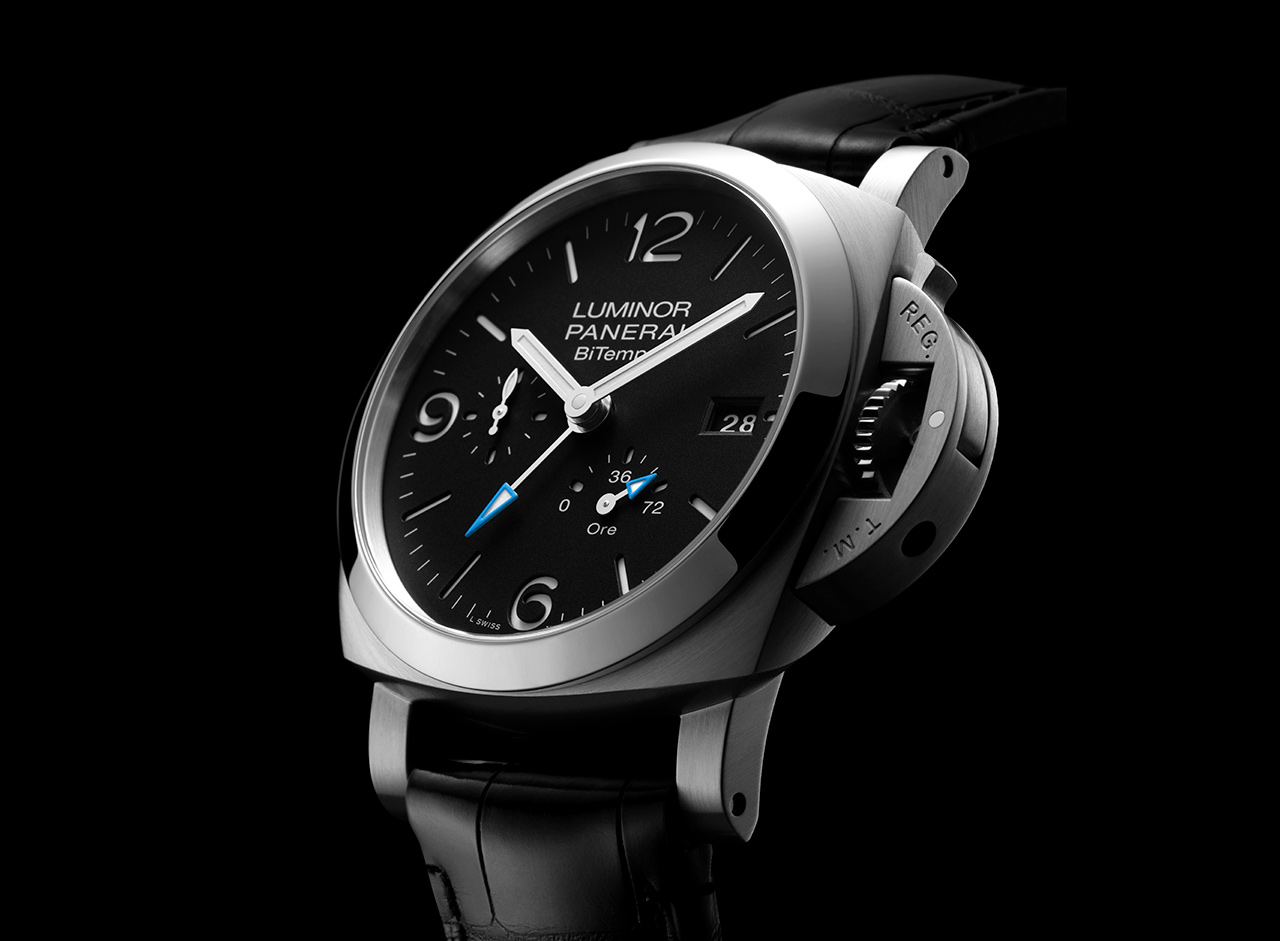 Two versions of the BiTempo have been released, one in black with a black leather strap and matte black dial, and the other in blue with a sunburst dial and colour-matched strap. At 44mm, these are in the middle of Panerai’s size range, which typically starts around 40mm and goes to 47mm and beyond. Both watches have a stainless steel case. 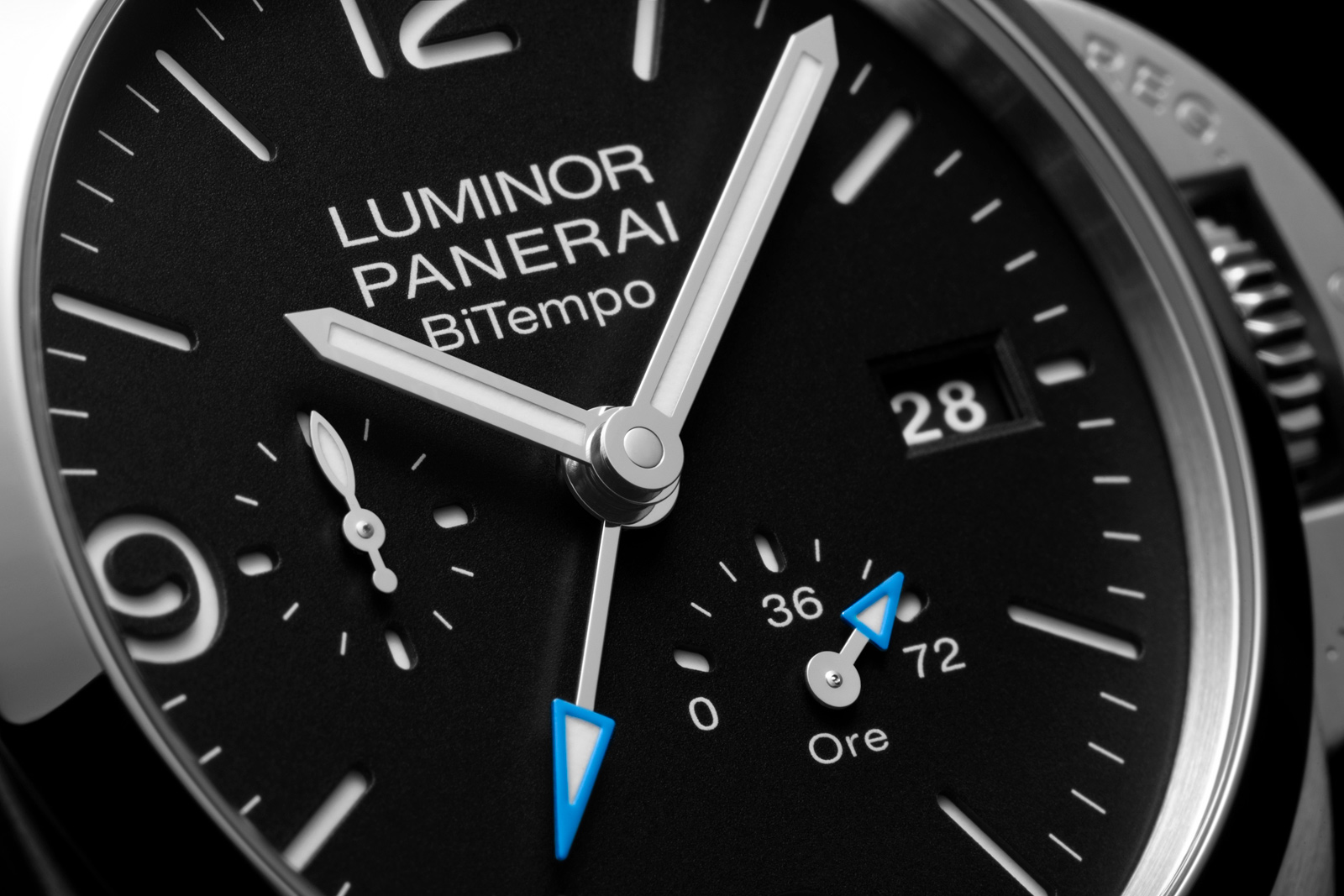 The BiTempo distinguishes itself from other Luminor models with blue touches on the dial. A blue-tipped semi-circular indicator shows the power reserve, while the main reason for the watch’s name sprouts from the centre. The BiTempo, or dual time, function uses the blue-tipped arrow hand as a GMT indicator, allowing you to determine the time in a second location while simultaneously showing the time in the first. Check out my review of the Rolex GMT Master II 126710 BLNR for a more thorough description of how that works. 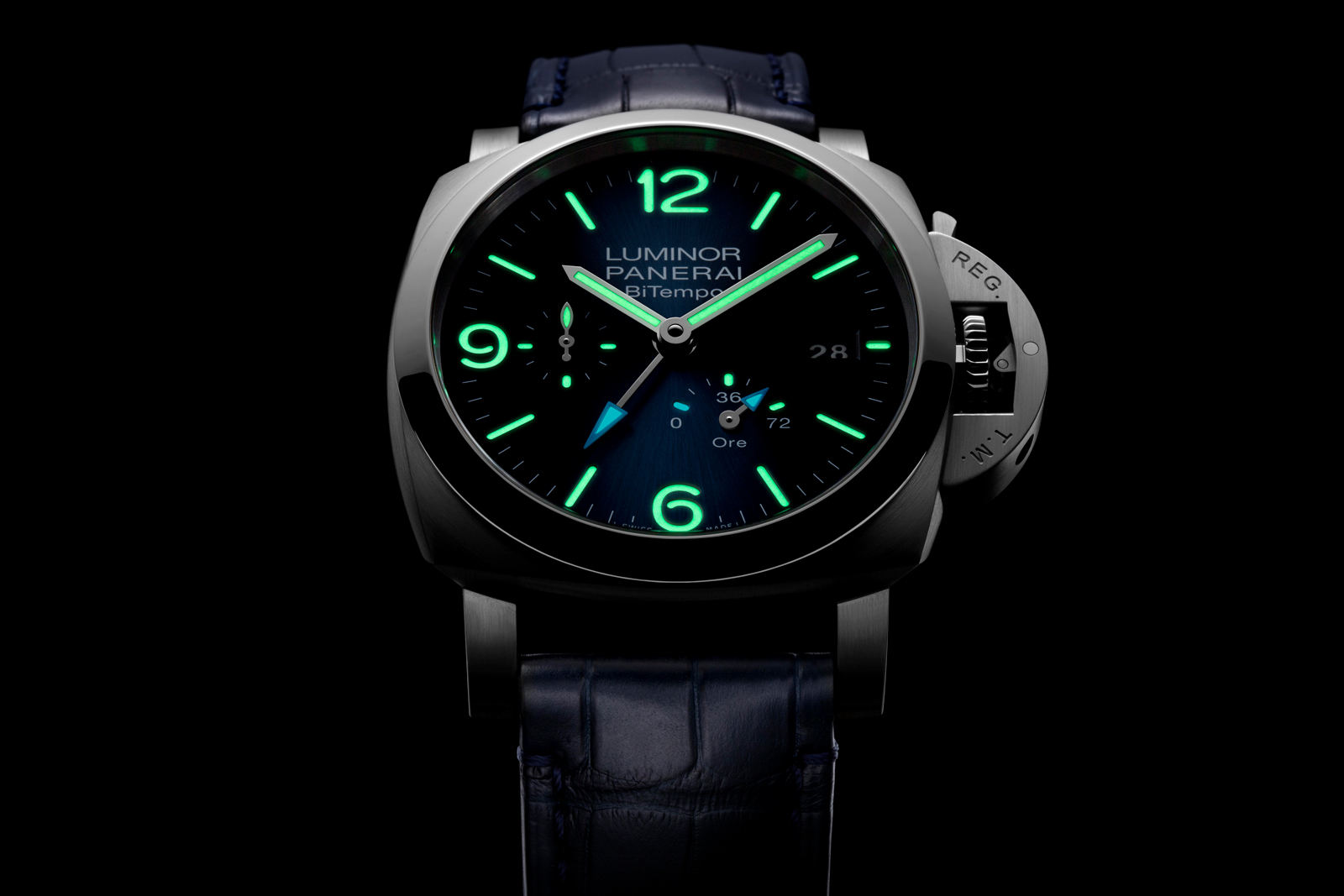 The rest of the dial on the BiTempo is classic Panerai, featuring a sandwich construction for a more historical look, and plenty of SuperLumiNoval all over the place helps keep it visible in the dark. 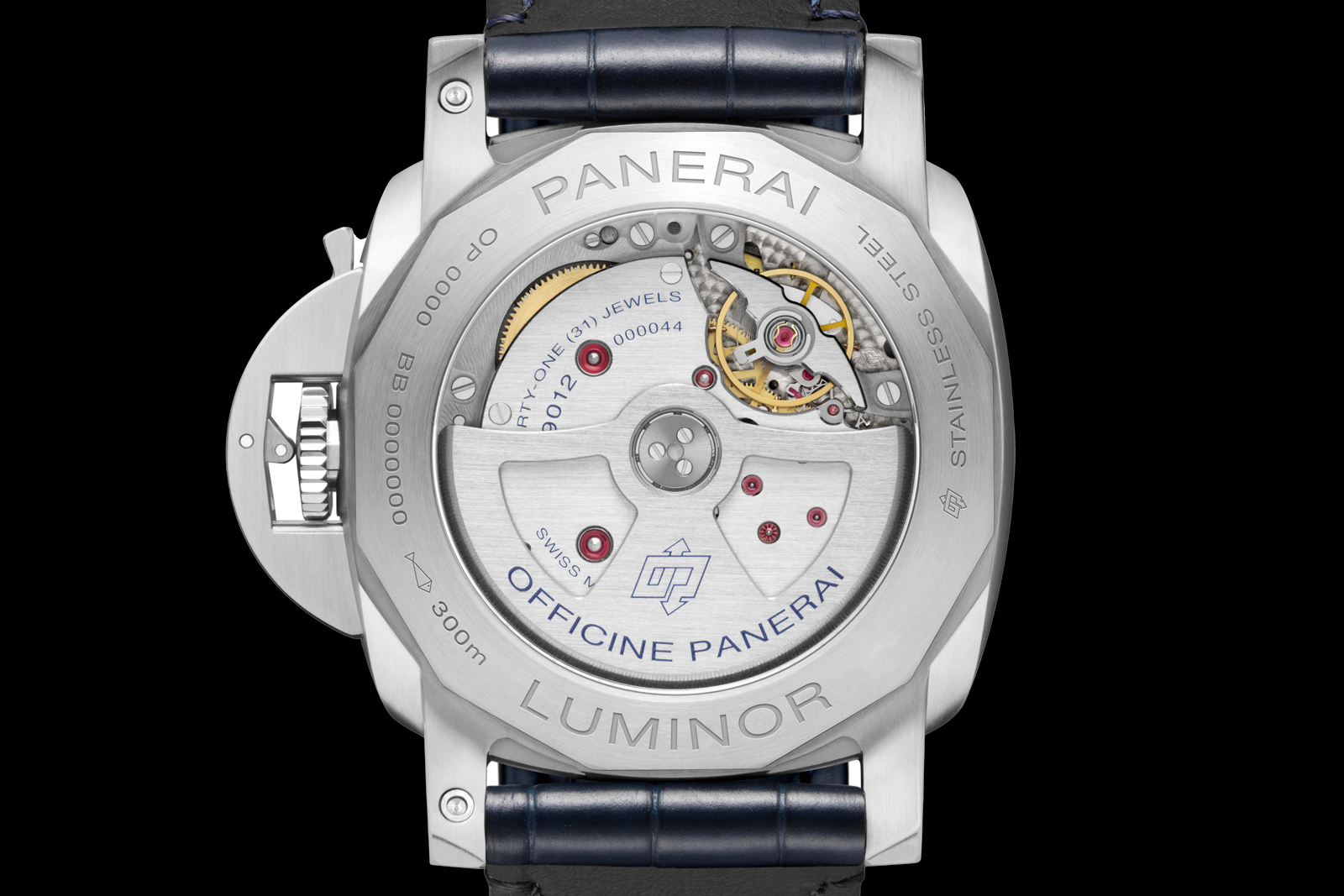 Powering this is the calibre P.9012, a self-winding movement with a 4Hz beat rate, 31 jewels and a 72-hour power reserve. Along with the power reserve and GMT functions, there’s also a date window too, and the inner workings of the movement are visible through a sapphire crystal caseback. Interestingly, this movement powered the BiTempo’s predecessor, the Luminor 1950 3 Day GMT, as well, which is why the layout on the new one is identical.

Overall, this is a smart-looking little collection, and we hope Panerai takes it further and offers us more variety with these in the future. Both models are being serially produced and sold at a price of €10,300, which includes a rubber strap as well.