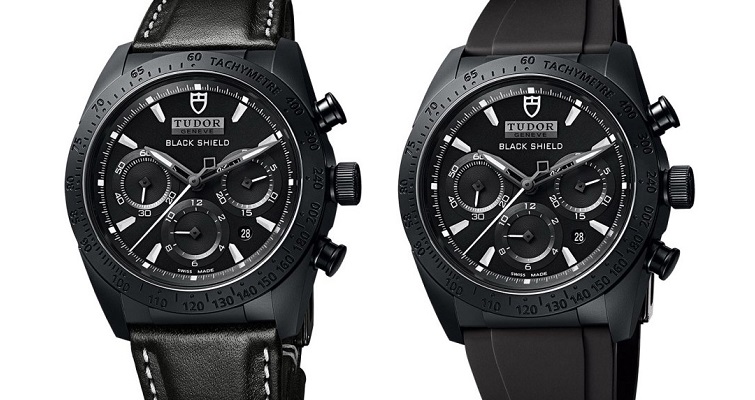 Associating key brands together is a very strong marketing tool that has been used by many industries. In the entertainment industry, the tie-in between Lucas Film and Disney allows the Star Wars franchise to be exploited by Disney in ways that may not be possible if Lucas Film was to have done it on its own. Similarly, in the world of horology, the same can also be seen. 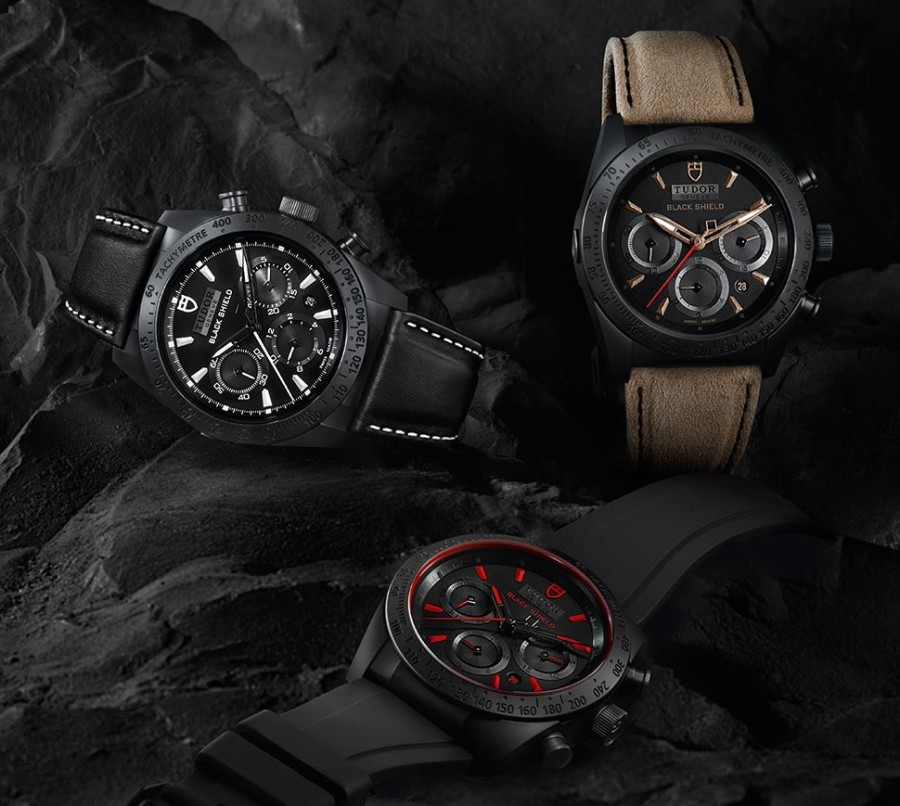 Tudor began its collaboration with the superbike maker Ducati in 2011 and introduced its first Fastrider Black Shield watch in 2013 that came in two variants. The 2013 wristwatch was inspired by the Ducati Diavel and it marked Tudor’s first all-ceramic case. For 2015, Tudor released its third variant in conjunction with Ducati’s release of the XDiavel cruiser model. 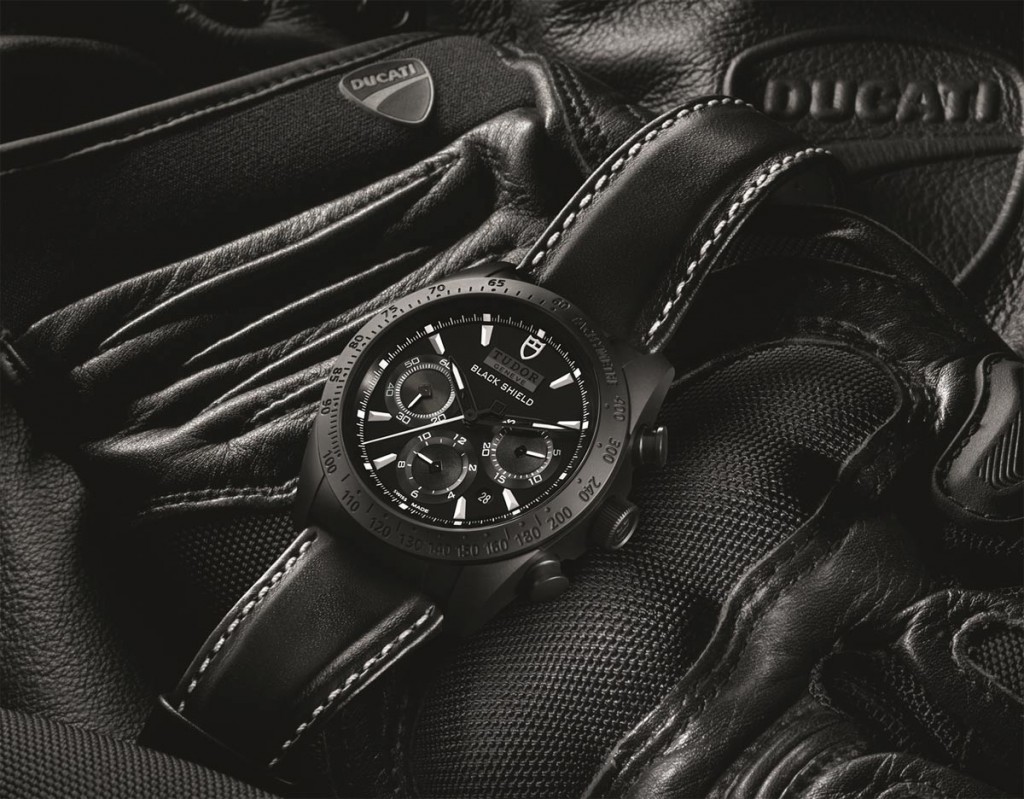 The Fastrider Black Shield measures 42 mm wide and its case is made from nearly scratch-proof injected ceramic. The case is a monobloc, meaning it is made from a single piece. Those of you with some knowledge about manufacturing procedures and ceramic material can appreciate the complexity of the manufacturing process to make the monobloc casing of the Fastrider Black Shield. 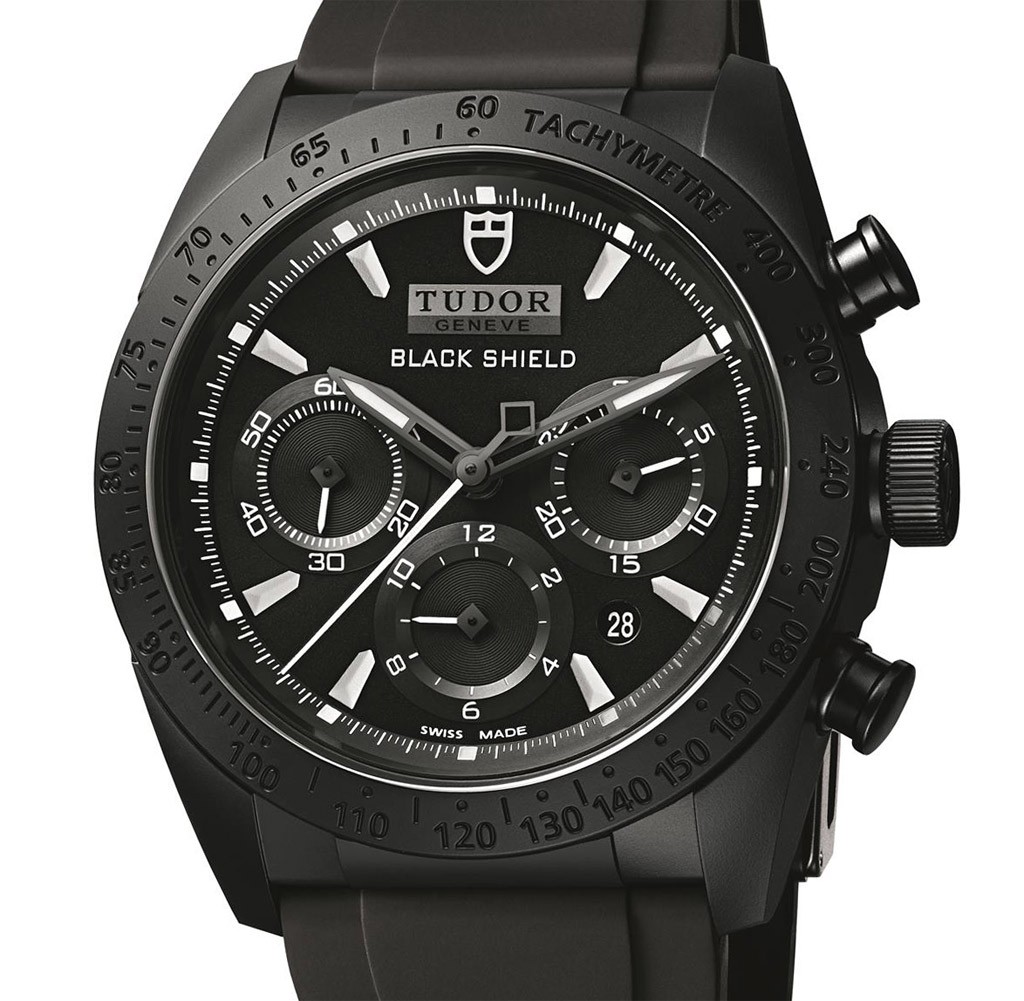 The matte black dial is highlighted by white hour markers and numerals, a white central chronograph hand, and small white hands for the 12 hours counter sub-dial, the 30 minutes counter sub-dial and small seconds sub-dial. The hour and minute hands are partially skeletonised. White luminescent coating is used on the hands as well as the hour markers. There is also a date window on the dial between 4 o’clock and 5 o’clock position. The black monobloc case with its bead-blasted finish is water-resistant to 150 meters and virtually scratch-proof.

The fixed bezel with engraved tachymeter scale is also crafted from matt black ceramic. However, the screw-down winding crown which has the Tudor logo etched on the surface as well as the chronograph pushers are made out of steel and has a black PVD treatment. Although I can see the rationale of having a tachymeter scale for a racing inspired watch, not having the markers painted in a contrasting colour to the rest of the watch casing makes referencing hard. Moreover, the effort of making the watch casing virtually scratch-proof but only affording PVD treatment on the stainless steel part of the watch is a surprise to me. A Diamond-Like Carbon (DLC) coating would be more appropriate in my view. 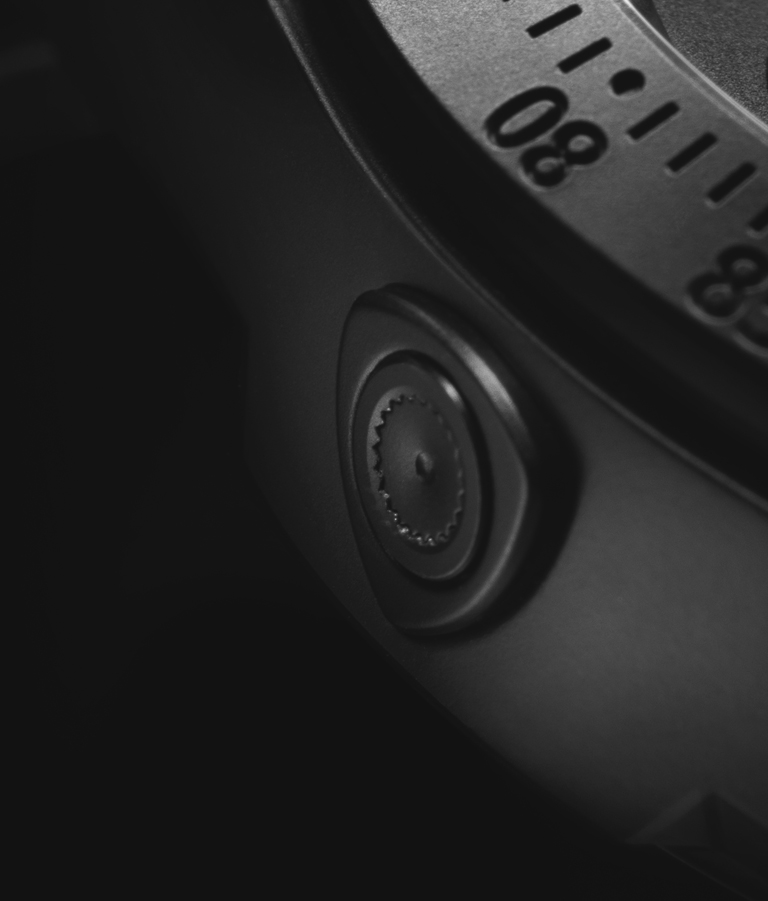 The movement in the Tudor Fastrider Black Shield is the automatic chronograph Caliber TUDOR 7753 which was based on the well-known ETA Valjoux 7753 movement. It has a power reserve of approximately 46 hours and a fast-adjustment date corrector which can be accessed via a button on the right side of the casing at the 9 o’clock position. 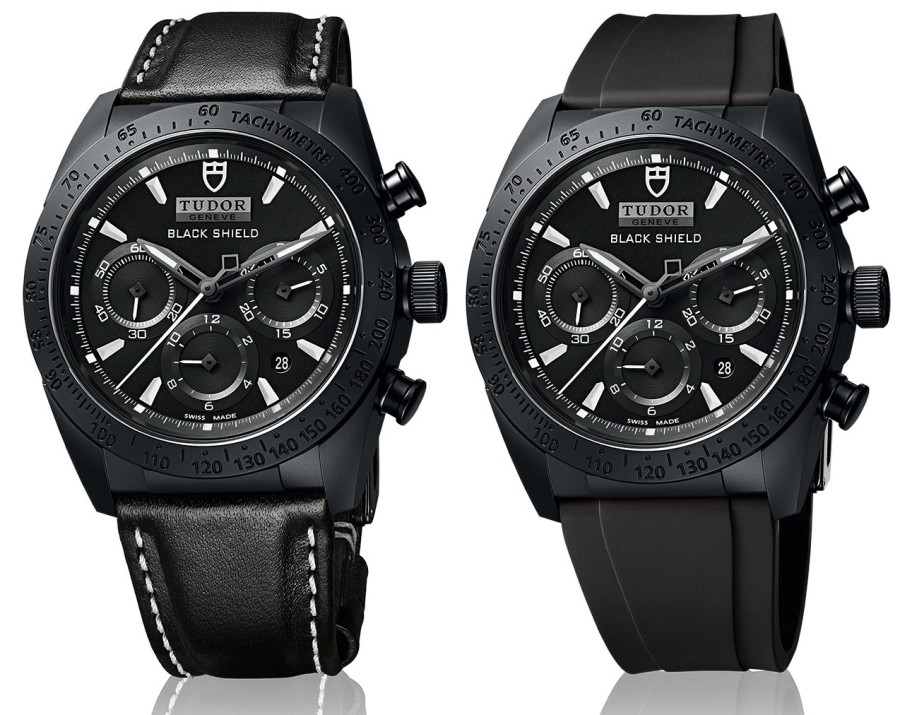 There is an option of having the watch either with a matte black calfskin leather strap, with white contrast stitching or with a matching matte-black rubber strap. Both options retail at US$4,925. 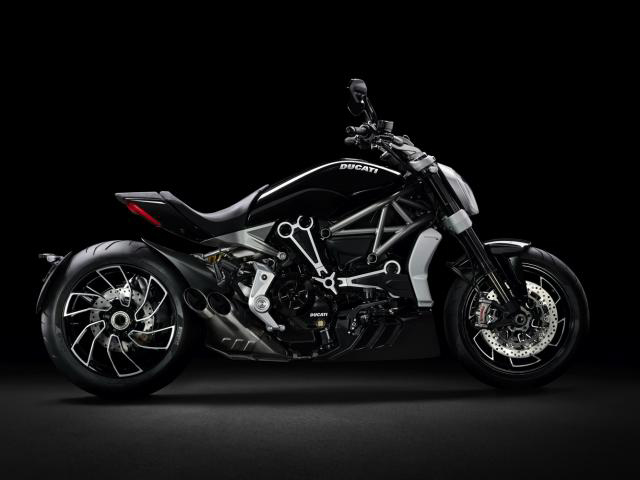 I really dig this watch because of the ceramic material as well the important fact that this watch remains a pure Tudor watch.

Ceramic is more akin to stone instead of metal and the use of a not-too-common material as the base element for the main watch casing makes it very desirable to collectors. I for one would buy this watch because of this despite the fact that the movement is just a variant of the venerable ETA Valjoux 7753.

Despite the association with Ducati, without knowing the history, it is impossible to equate the watch to the famous superbike brand. The ability to stand alone as a Tudor watch is something that I truly appreciate. Any obvious linkage such a small mark of Ducati on the watch (for example) would actually cheapen the value of the watch in my view. 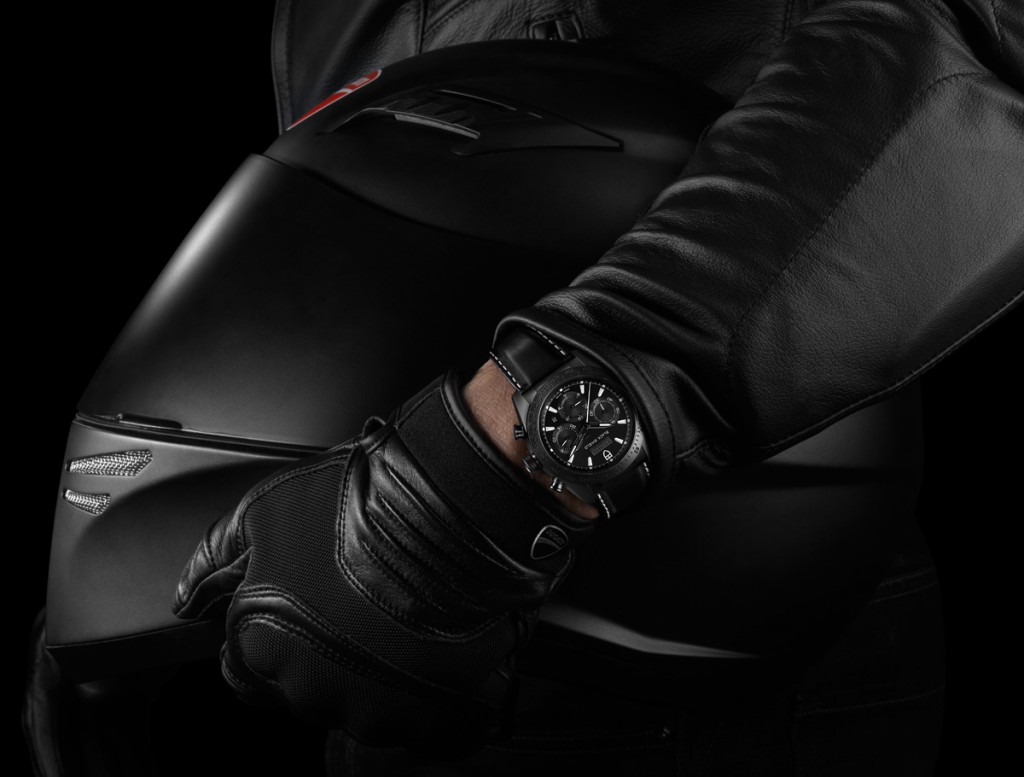 Despite its tool-like design specifications such as the black and white contrast for the dial markers and hands, this watch is better suited as a dress watch. Why do I say this? From a practical point of view, the blackout concept only works with some form of light source. In the world of the modern military, digital watches have effectively replaced mechanical watches as the standard issue timepiece due to the fact that it has a light source that can be called on demand in any occasion. Unfortunately, for the Fastrider Black Shield, the tachymeter scale is difficult to see even in daylight. Therefore, realistically speaking, the function can only be used effectively in very specific conditions that you won’t find in the field. Does it really matter? Not in the very least. The quality of manufacturing and furnishing is first class and in all honesty, I would prefer to use the watch in a more formal environment. The thought that you can use it in the field if you wanted to, is a bonus.

Pricewise, although not cheap, it can be considered a fair compensation for a ceramic monobloc case chronograph watch from Tudor.

Area of improvement that Tudor could consider would perhaps be the use of DLC treatment instead of PVD on the stainless steel parts of the watch. The DLC process provides a better scratch-resistant treatment compared to PVD.

Overall, I am impressed with the watch and could get one because of the reasons highlighted earlier.