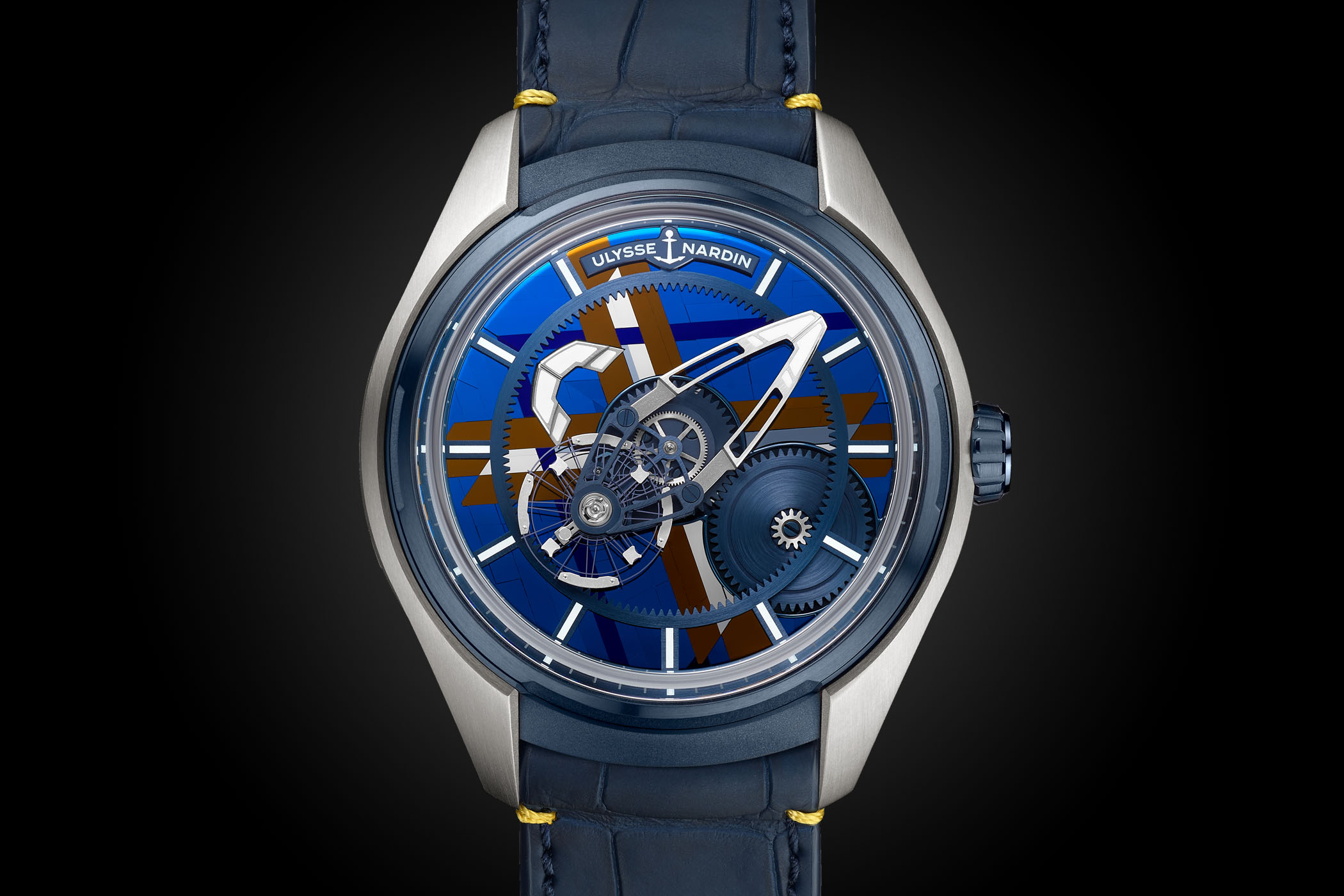 Ulysse Nardin’s Freak is not just the luxury swiss manufacture’s most audacious collection to date, but it is one of the boldest designs that has been available in the commercial market. The Freak lives up to its name, boldly pushing its desires to the max while shaking up the status quo with its unconventuial form and design. The Freak X isn’t just inspired by adventure. The watch as itself is a symbol of the exploration that Ulysse Nardin proud themselves for and they have taken a step further this year.

The proclaimed undisputed master of silicium, Ulysse Nardin continues on this exploratory path and has turned a material that is synonymous and well known in the electronics industry into a creative platform acting as a medium of artistic craftsmanship. After the launch of its “X” Collections at the Salon International de la Haute Horlogerie in Geneva, the watchmaker now presents two astonishing new FREAK X models, embellished by a decorative technique that had hitherto been almost totally undiscovered: silicium marquetry. A revolutionary material par excellence, silicon had already proved its worth in Ulysse Nardin watch movements. 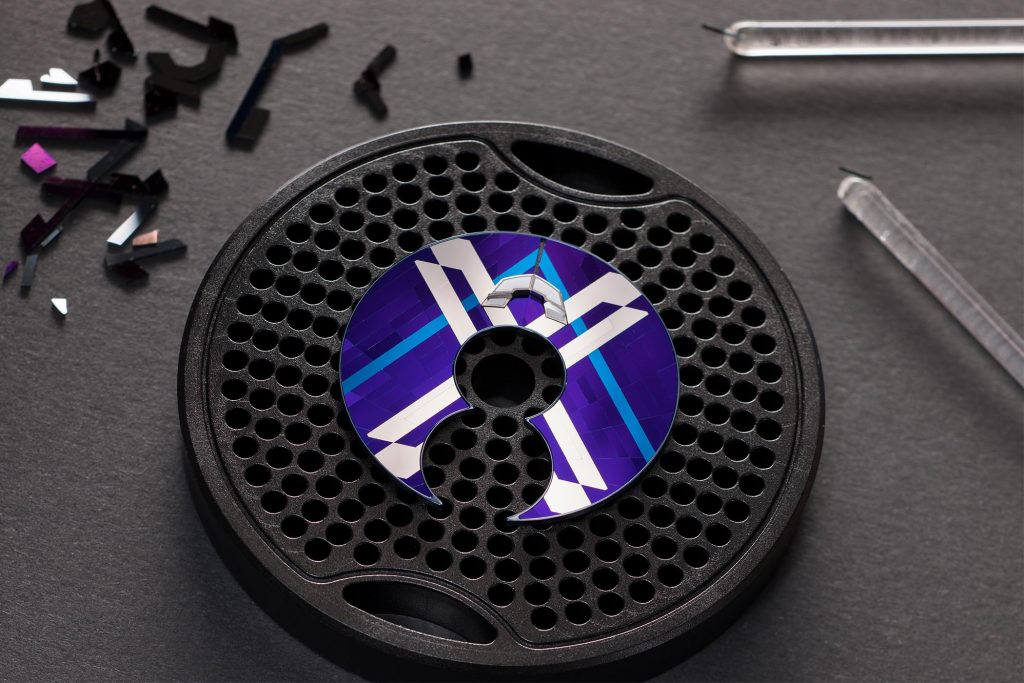 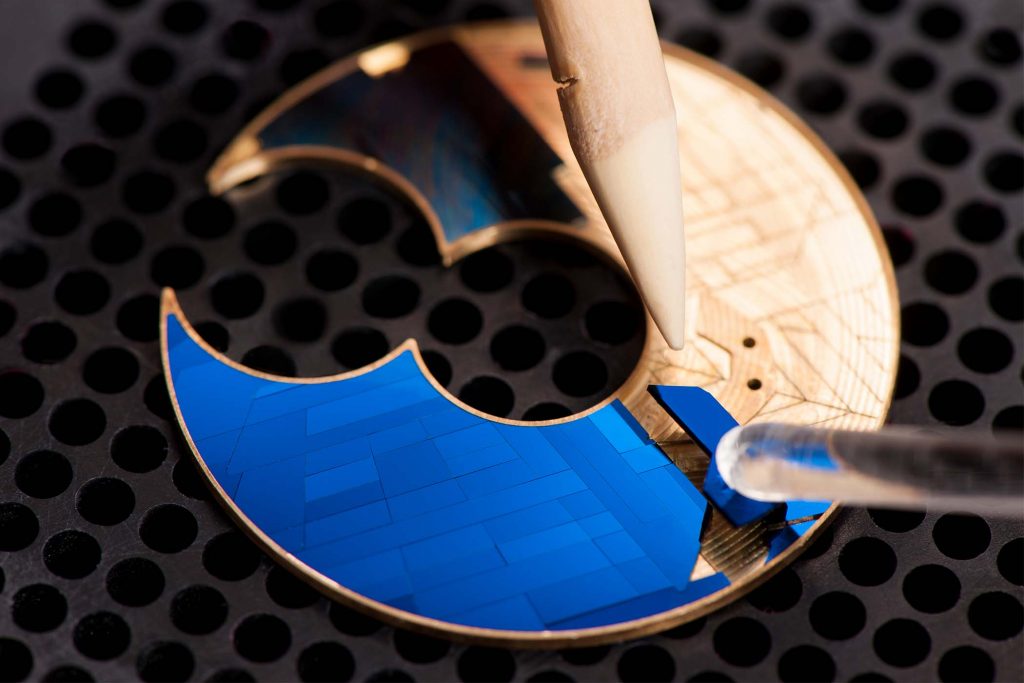 A totally new revelation in the world of watchmaking, silicium marquetry involves assembling wafers of silicon cut into segments with a plasma accelerator. Think of it as a jigsaw puzzle the watchmaker has to solve and put together. Except this time the jigsaw is technically your dial. All the subtlety of this technique lies in the craftsman’s dexterity, given that the silicon used is extremely flaky and fragile when moved. Slightly superimposing the segments one on top of the other, rather than interlocking them, will be enough to chip their edges. It thus represents a veritable feat of “technological craftsmanship”, assembling by hand a collage of the roughly 120 segments needed to create these astonishing mosaics. The end result has a unique impact, as the eye is dazzled by the glittering marquetry, resembling a bevy of interacting laser beams. 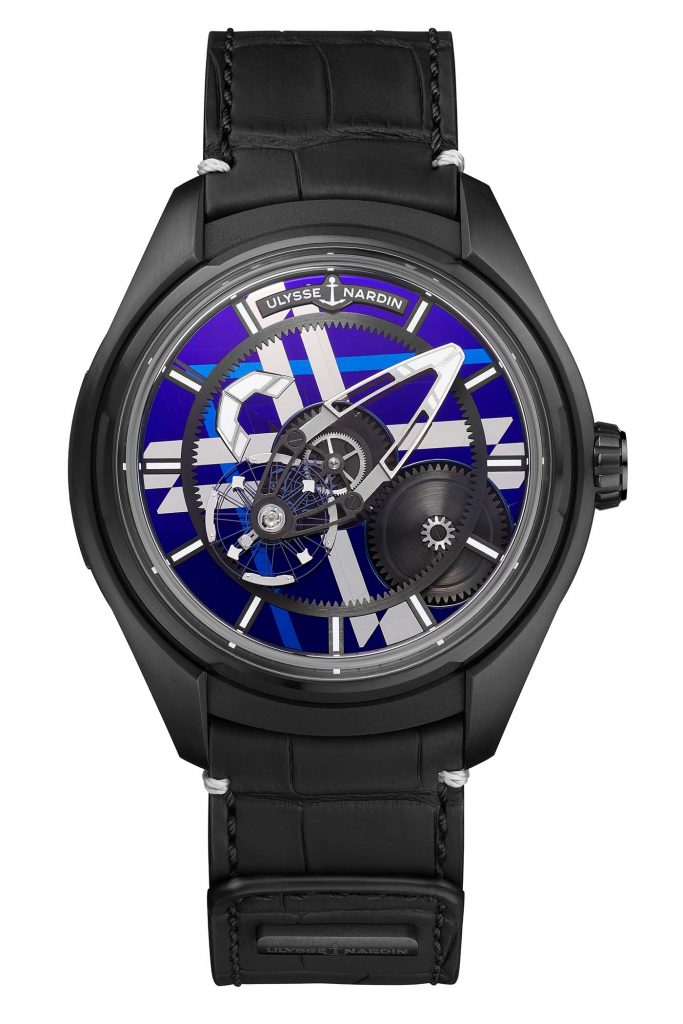 The marquetry dials of these two new versions of the FREAK X watch, a gilded “X” on a cameo of shades of blue in the one case, and a silvery “X” on a purplish-blue background in the other, are both extremely reactive to light. Silicium marquetry offers a spectacular display of reflections of unmatched brilliance, with some 120 fragments of different sizes and shades illuminated as the light sweeps around the dial like the beam of an X-ray! 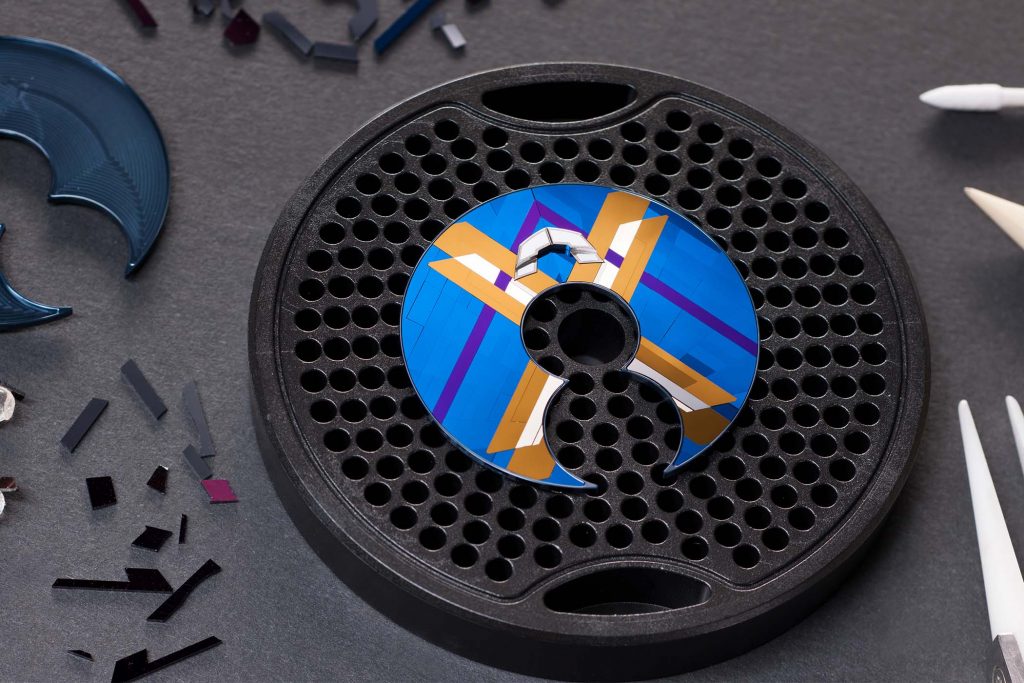 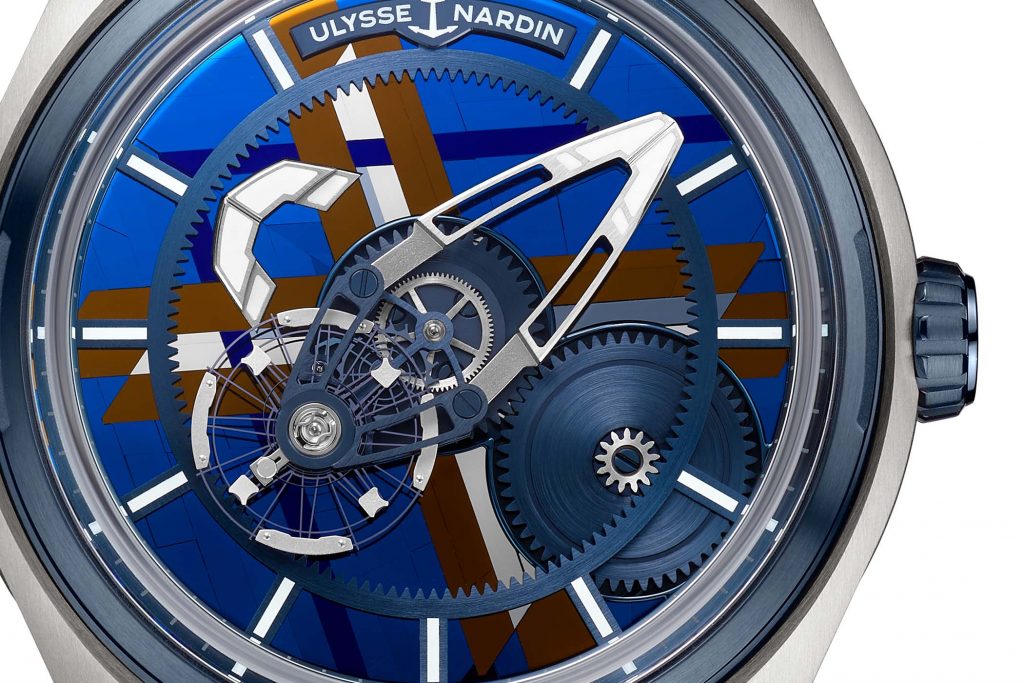 The Freak X Silicum Marquetry comes in a tighter package of 43mm instead of the usual 45mm. This in no way compromises the easy of operating the timepiece and the visibilaty of the dial. Infact, the 43mm, being more compact, is set to please more of wrists. The traditional “baguette” style movement is still a carousel, turning once on itself every hour to indicate the time. It is simpler, bolder, and has fewer wheels. It has no dial and no hands – the central bridge acts as a minute hand and one of the wheels indicates the hours.

Inside and clearly visible beats one of the most outstanding innovations: a super-light balance wheel in silicon, extra-wide, with nickel flyweights and stabilizing micro-blades. The new UN-230 movement boasts an impressive 72-hour power reserve making it an ideal weekend watch. The case, as expected, has nicely rounded with curved lines, is wholly new, and seriously transformative. 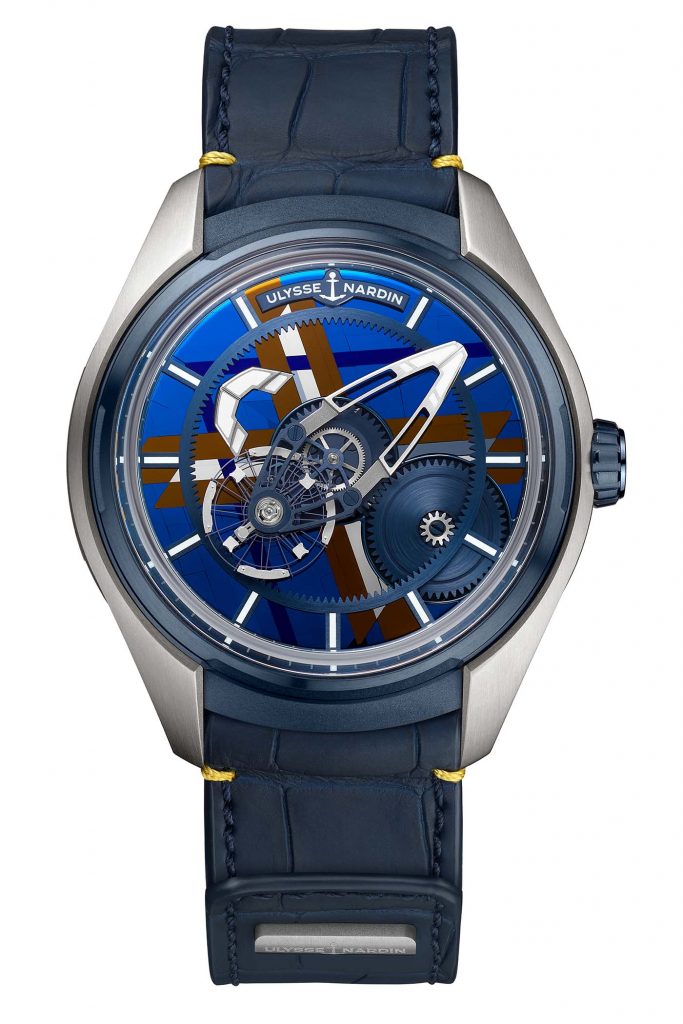 The norm-breaking, artistic Freak X is available in either a titanium blue PVD or a black DLC titanium case and will be appropriately paired with either a complimenting blue or a black alligator strap respectively. The price for the Ulysse Nardin Freak X Marquetry is Euro 29,500. Visit Ulysse Nardin here.