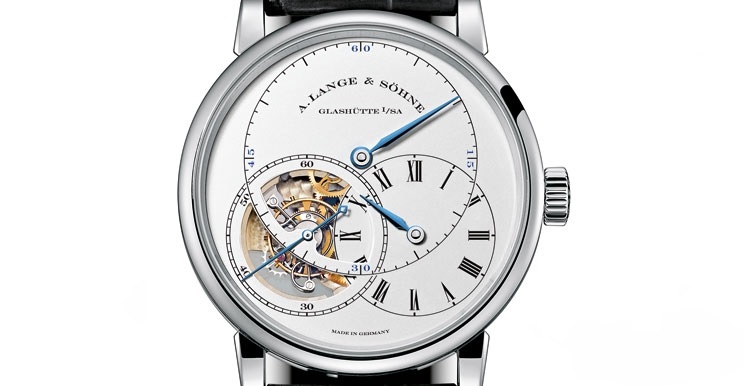 I have a real cracker for all of you WristReview readers out there today. I’m staying in the realm of A.Lange & Söhne with my complex watches, however, today’s subject features a tourbillon. It’s in white gold and part of the dial moves to reveal the tornado in motion behind it. By the way, tornado is English for tourbillon.

Starting with aesthetics and we can see that immediately Lange’s got it right. They’ve based their design off of Johann Heinrich Seyffert’s Chronometer No.93 design where all three parts of the time are speed out into their own overlapping dials rather than all being placed on top of each other. One of Johann’s chronometers accompanied Alexander von Humboldt on his 5 year expedition across the USA. For those scuba divers and marine biologists out there, that is the man that the Humboldt squid is named after.

I digress. The top ring on the dial has the blue minute hand in, the blue basically shows it’s a white gold piece rather than platinum. It’s the largest of the three rings, probably because minutes are generally the most important part of time keeping. Bottom right is the smaller hour ring, it’s got a smaller lancet hand than the minute hand and features roman numerals orotund the inside edge. It overlaps the seconds and minute ring. Left of the hour ring is a hole and a spinning thing with the seconds hand connected to it. That’s the tourbillon through there, all 0.25g of it.