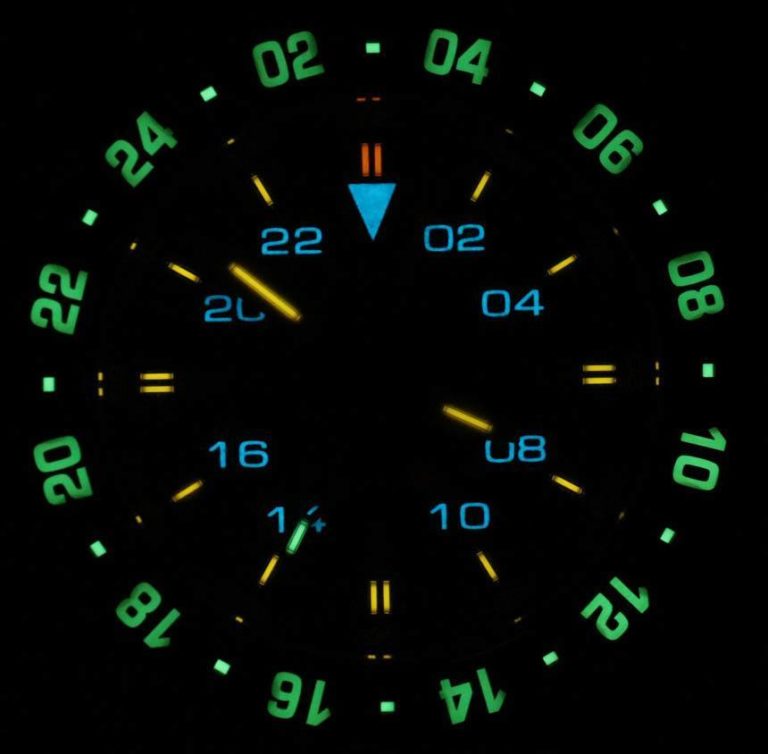 The BALL Engineer Hydrocarbon AeroGMT Reference DG2016A-SC-BK was revealed to the public during BaselWorld 2015. Although the Hydrocarbon range by Ball is extensive, the AeroGMT is the first to have tritium gas tube illuminated bezel. What makes it even more remarkable is the fact that the AeroGMT has a whopping 43 tritium tubes. 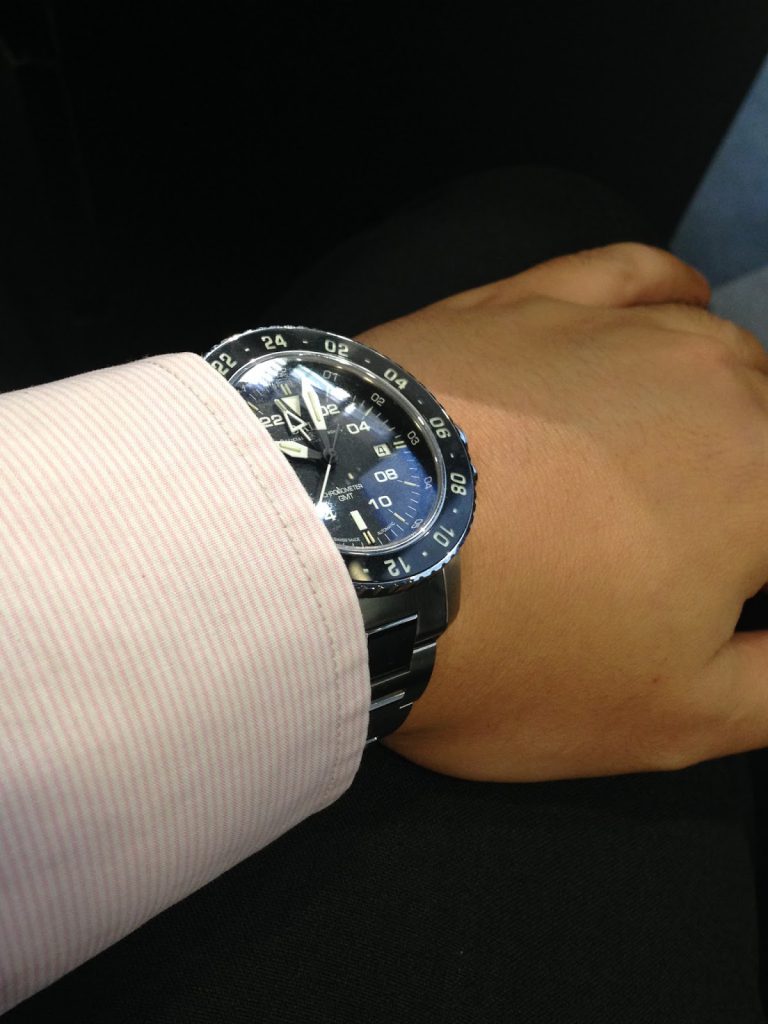 Let me start with some general observations about the watch. This watch has most of the things that I like: a GMT, domed sapphire crystal, sapphire bezel and bright illumination. It is not too wide, only 42 mm across. Nevertheless, it is rather tall and has a height of 13.85 mm. The use of the domed sapphire crystal for the dial as well as the thicker-than-usual bezel (to incorporate the necessary space to attach the micro gas tubes) all adds to the height. Coupled with the broad lugs, this watch feels much bigger. The crown protector, located at the traditional 3 o’clock position, also augment the bulkiness.

Visually, this watch has a simple black and white colour scheme. It was created under the genre of a pilot watch instead of the diver style common under the Engineer Hydrocarbon series. Nevertheless, you will still find the robustness expected under the Engineer Hydrocarbon series such as the screw-down crown and the 300-meter water rating. Made out of stainless steel, the surfaces are polished and brushed.

Having looked at the dial, I came to a conclusion that it does look a bit busy. Using a slightly small font size for the main Arabic numbers could have alleviated this perception somewhat. Also, I don’t think it is necessary to have all six lines of text on the dial. I feel some of the text is irrelevant. Also, the location of the date window in a position that is not balanced by the rectangle marker on the opposite side makes the dial look out of sync. If I could give an input, BALL engineers should try placing the date window at the 6 o’clock position instead. This is more visually pleasing. 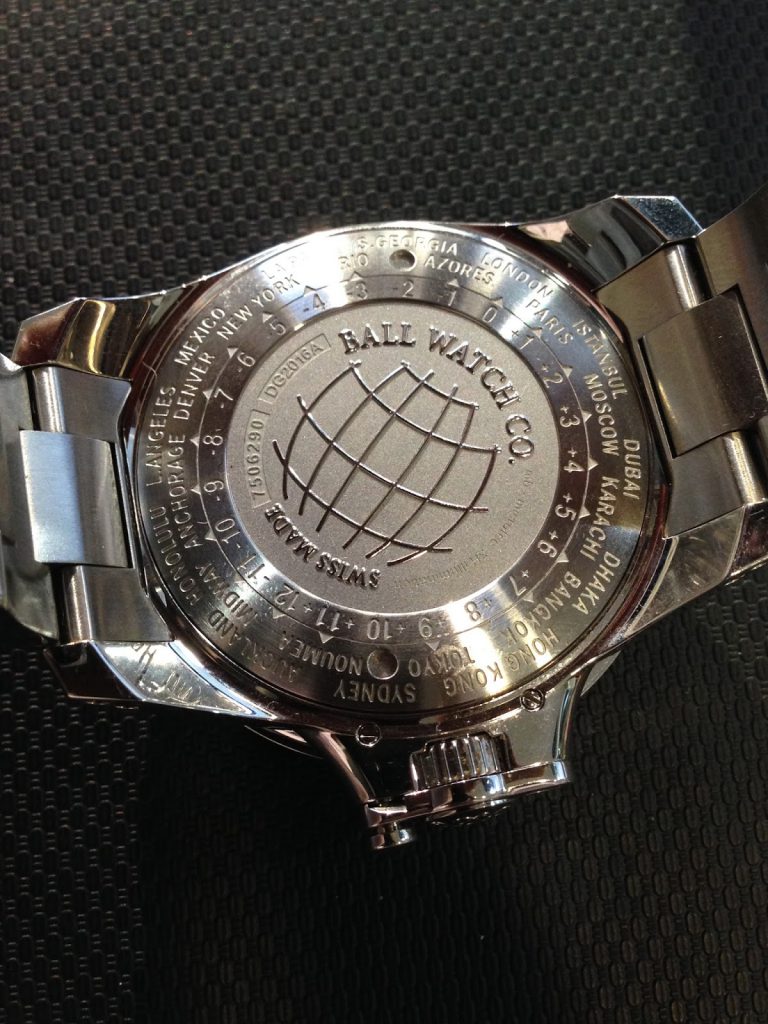 The back of the watch is also equally interesting. Ball has decorated the steel screw-down caseback with a line drawing of Earth’s longitudinal and latitudinal lines. Around the circumference are cities with corresponding GMT time reference. This is a great reference to have as it makes this watch a sort of ‘World Time’ watch as well.

The watch is powered by the automatic Ball RR1201-C which is a COSC chronometer certified movement. It beats at 28,800 VpH or 4 Hertz and has a 42-hour power reserve. A GMT movement with 21 jewels based on the modified ETA 2893-2. This GMT movement does not feature the “quick hour” setting that allows you to change time zones without hacking the watch. 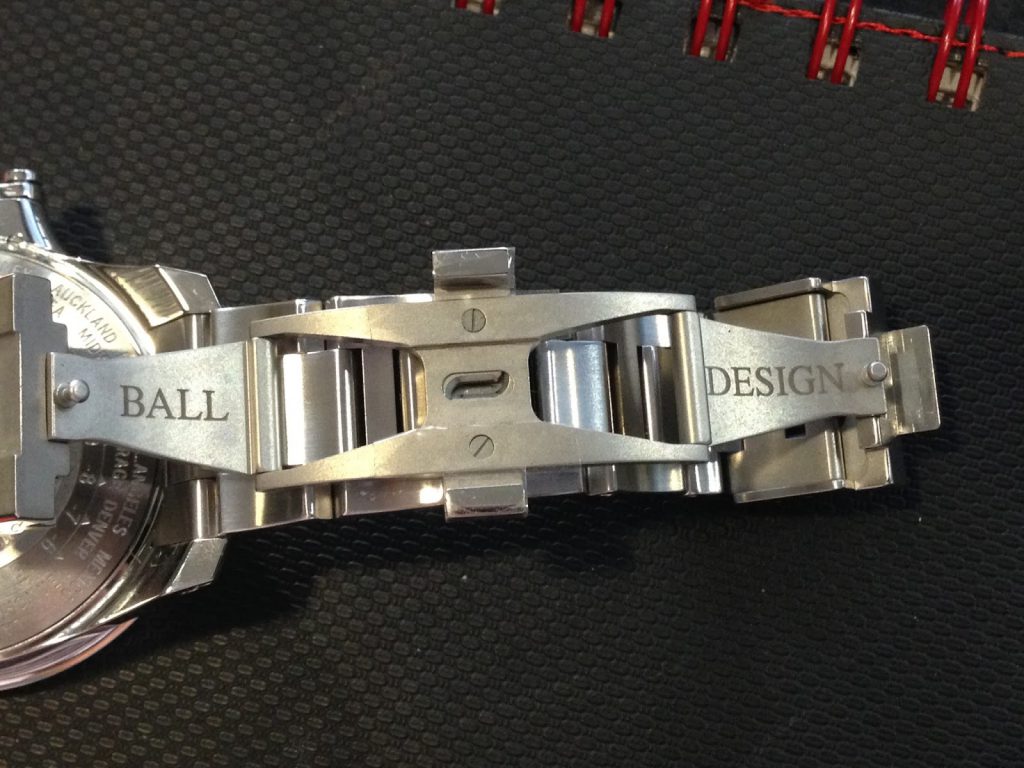 The bracelet on this AeroGMT is first class. The butterfly style clasp is forged from a single block of steel. The bracelet itself not only comes with half links on either side of clasp but also has a diver’s extension on each side of the clasp.

Although the AeroGMT is touted as a pilot watch, the watch is more diver-like in appearance due to the sharing of the Engineer Hydrocarbon base design. As such, it carries a lot of weight and bulky. For a wearer that appreciates a pilot watch, he or she will have some issues with this watch on the mass and size aspects. It is, therefore, important for anyone wishing to buy this model to understand the history and spirit of the design so as not to be misunderstood. 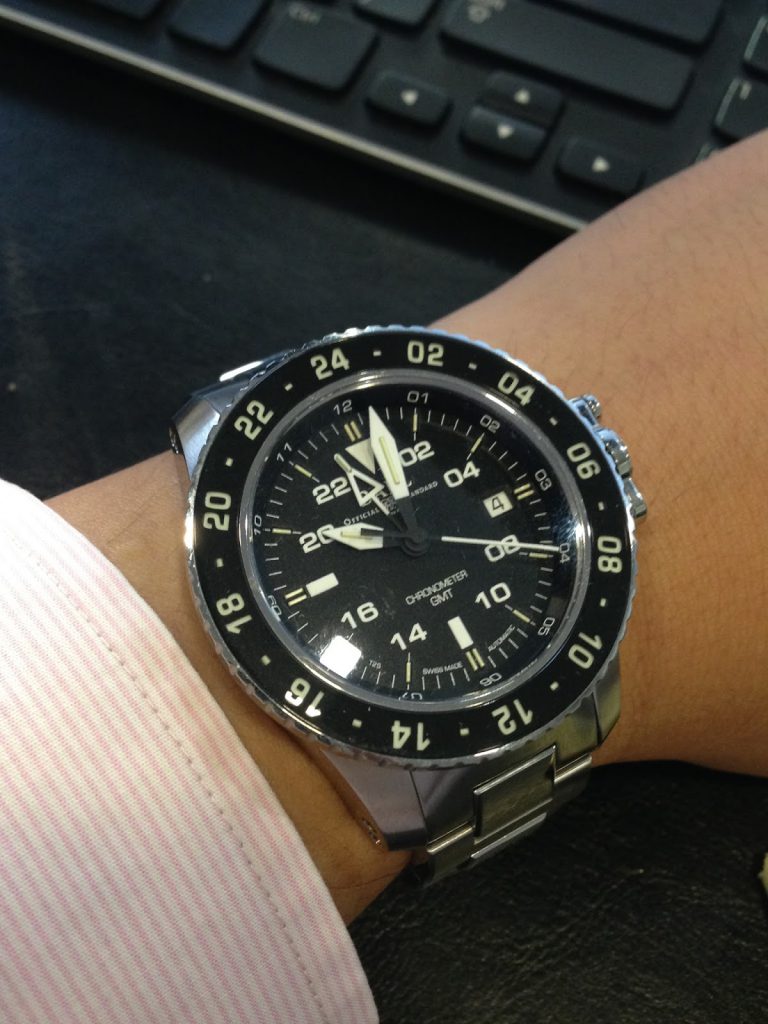 The AeroGMT has an excellent wrist presence. If ever you want to impress, this watch does it. Despite its height, it is still possible to wear this watch with formal wear.

There are sharp edges to the watch. A common problem I find with the watch is during the wearing process. Just before you get the watch to sit just right on the wrist, it tends to pinch my skin near the hand side of the casing. The extended crown protection system also can create a painful experience if you were to wear the watch too close to the hand. As such, this watch should be worn tight on the wrist instead of loose. 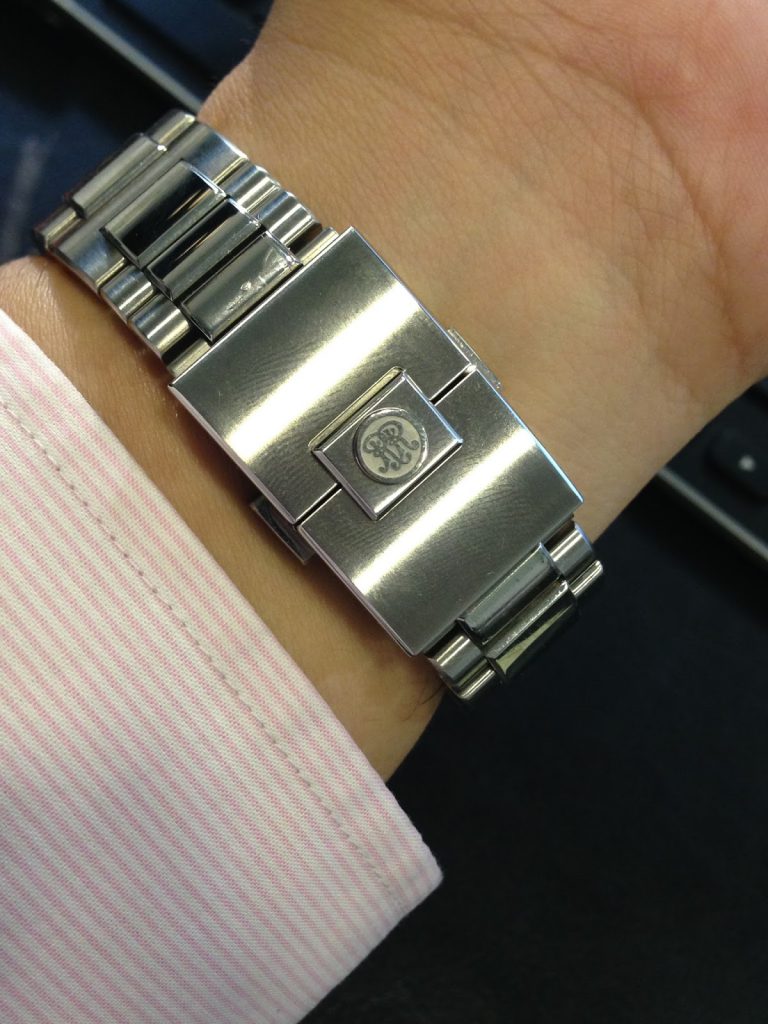 Unfortunately, the polished bracelet and casing are scratch magnets. The thick clasp is generally where you will find your first scratch mark as it is the surface that comes in contact with other objects especially if you are a desk diver such as me.

After two weeks, these issues were easily forgotten as one gets accustomed to the watch. I was actually surprised that these were non-issues after a while. It could only mean that the original design was sound and just requires familiarization to make it work effectively. 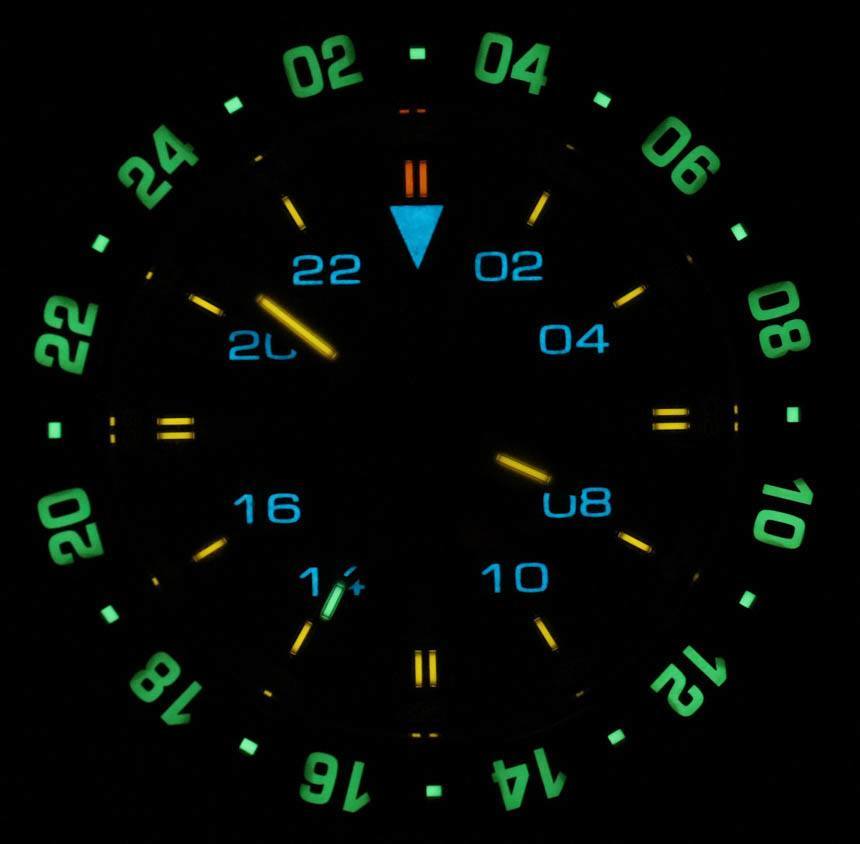 This watch comes alive in the dark. I relish every time there were opportunities to be in such an environment. The tritium tubes are like magic in the dark. The illumination is just spectacular. The AeroGMT has 43 tritium tubes. Not only on the dial (18 tubes) but for the first time ever, Ball has applied tritium gas tubes to the numbers on the GMT bezel (25 tubes). Unfortunately, I could not get a perfect picture of the illumination with my camera. However, the photo below which I got from the internet reflects what I see on my watch. In the light, the AeroGMT is just black and white; in the dark, it becomes a multicolour tool with blue, green, orange and yellow.

Overall, a good tool watch for people who like something substantial on their wrist. For more info, please visit ballwatch.com