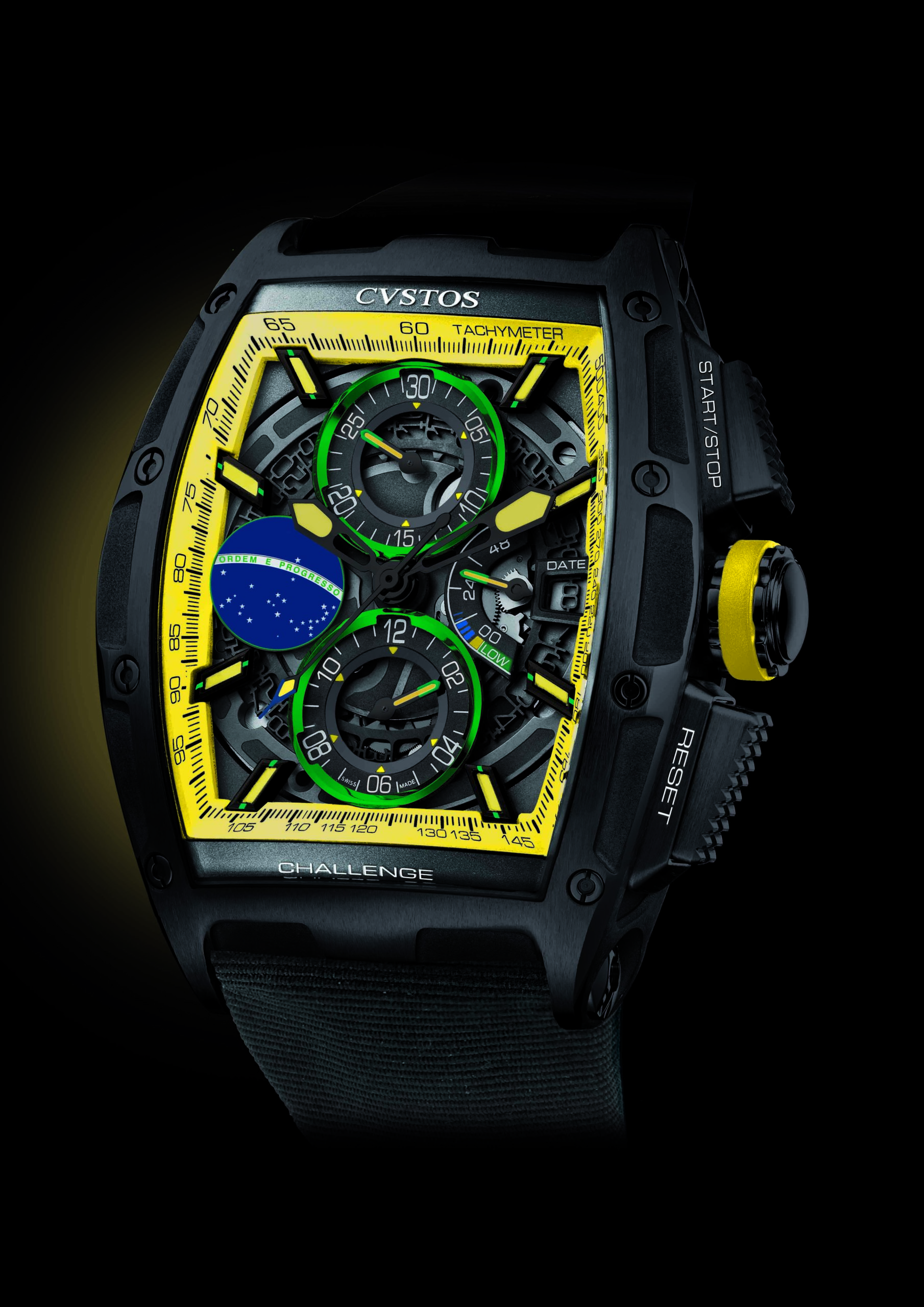 In great tribute to the great sites and rich heritage of Brazil, CVSTOS has released a brand new timepiece. Honoring the beautiful cultures of cities in Brazil such as Sao Paulo, Rio de Janeiro.
CVSTOS has really outdone themselves with the spectacular design of this watch. The watch itself is a tribute to the nation itself, the watch is designed to showcase the nation itself. The colors of the watch are vibrant, putting on display the colors of Brazil’s nationality. The yellow surrounds the piece representing the gold and the wealth of Brazil, the shadowing green represents the natural beauty and hope of this great nation, the dark blue symbolizes the night sky and rivers of the country, and the white embedded within the piece stands for peace. The backdrop of the piece and the hands on the piece are colored black for clarity. 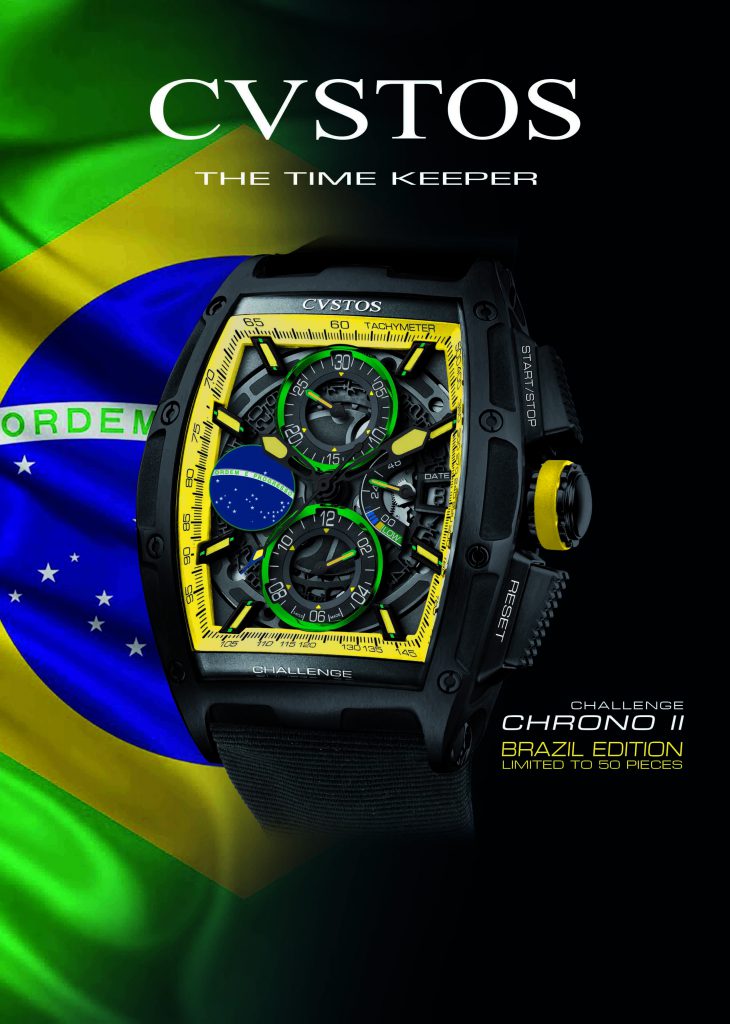 The outside of the piece is surrounded in yellow and encases a tachymeter scale used for tracking speed in a set amount of time and distance. Along with the tachymeter, the piece features eight chronograph counters along with the various hands in this same yellow. Green rims are put around the various gauges on the watch, as well as found on the chronograph counters. The dark blue is only found on the tip of the second hand and on the sky orb, or the blue disk night sky, the same symbol found on Brazil’s national flag. The white is used sparingly on some of the numbered meters, and in the sky orb. The sky orb contains the motto “Ordem & Progresso” and 27 white stars. The motto translates to order and progress, while the 27 stars represent all of the Brazilian Federal States.
Yellow Super Luminova lighting with green dots are featured on the hands of the chrono and the blackened background as well to bring a vast amount of clarity to the dial. Located on the right-hand side of the piece, near the bezel the Power Reserve Indicator can be found, which tells the wearer of the piece how much power is left. This indicator is accented with Brazilian’s national colors to continue further the tribute to the great country.
The Challenge Chrono II Brazil- Limited Edition is built from CVSTOS’s highest technological demands. The movement of the watch comes from an oscillating mass. The watch is constructed of black steel, tungsten 88 and titanium and in its movements, follows the basic physiological rules of the pendulum. In essence, the watch powering parts inside of the piece swing back and forth to create momentum, speed, and movement to power the watch. The case of the watch is 53.7mm x 41mm, which is best to encompass the overall size, shape, and feel of the piece, keeping the piece fairly practical and comfortable on the wrist of the user. Titanium serrated pushers are placed on the case of the piece, helping the user find an easier grip with the watch on their wrist. 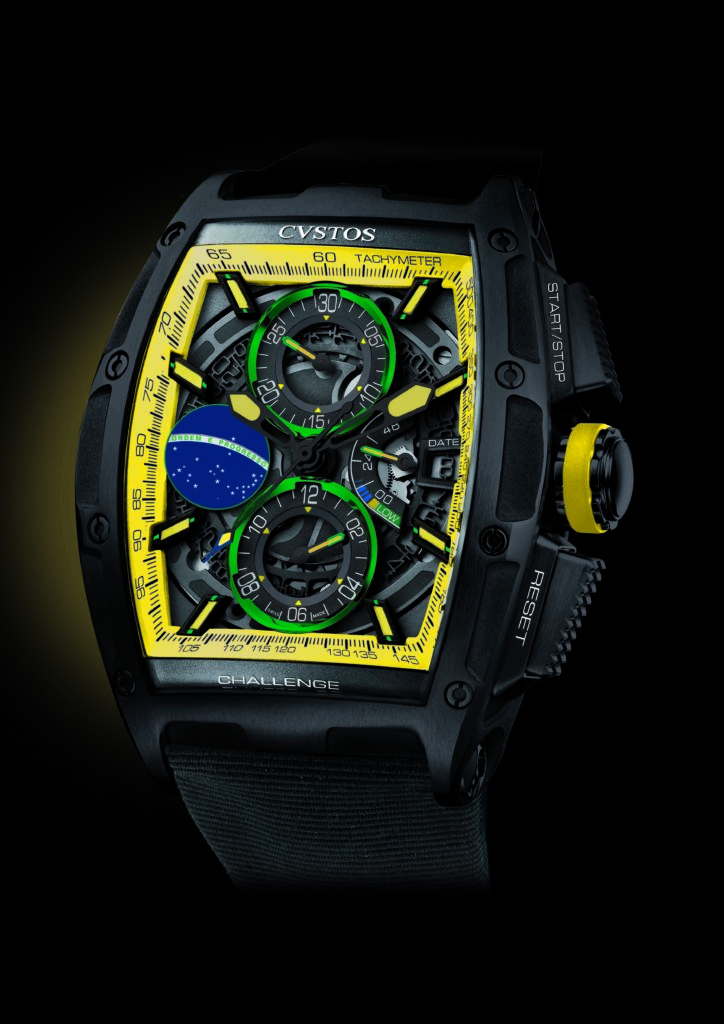 The black nylon strap encompassing the chronos is fitted for the users wrist, providing more comfortability and stability. The piece also features subdials on the face for a 30 minute counter, and for the date and is water resistant up to 100 meters. This beautifully designed Swiss watch is a limited edition; CVSTOS is selling only 50 pieces for a price not yet named. Get yours while you still can. For more info, please visit cvstos.com