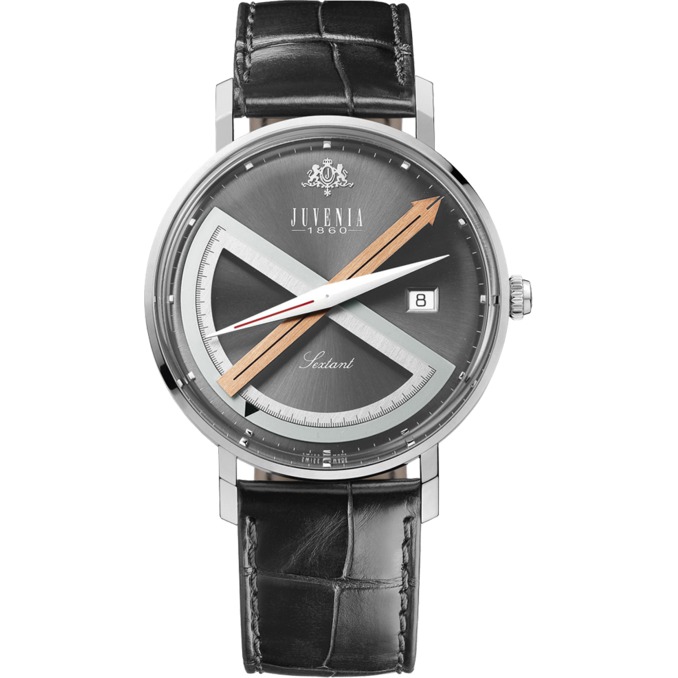 Focus of the day on a watch that I really love. It’s the Sextant by Juvenia Manufacture.

So, for those who don’t know this brand, I’ll begin by a little story.
Currently Juvenia is a quiet house . However, this brand has a great story, and produces watches, particularly elegant and with a perfect finish.

Juvenia was created by an alsatian horologist (Yes a French lol): Jacques Didisheim who opened a watchmaking workshop in 1860 named « Juvenia » in Saint-Imier, Switzerland. Endowed with a great sense of vision and hunger for success, he finally moved to la Chaux-de-Fonds where he found the ideal environment to let his imagination flow. Under his management, Juvenia progressed and applied for several patents in 1910 after manufacturing a range of products in watchmaking and jewelry.

The heirs of the Didisheim family didn’t wish to continue the adventure and is Ebel who took over the business around 1982. Nevertheless, at that time, there was no clear strategy, which is why less than 10 years later, the company was again for sale.

In 1991, it was then taken over by a Chinese group from Hong Kong : Asia Commercial. For information, Asia Commercial is an important undertaking, which manufactures both in private label or under the brand Accord and distributes watches of different brands. In the 90s, Asia Commercial , created in China a chain of stores , multi-brand distribution , called Time City. With the purchase of Juvenia, it allowed the group to have its own brand of prestige,and of course ” swiss made “.

In 2003, creating Juvenia Hong Kong , which provides big distribution to Juvenia watches, and not only through Time City stores. After that, a great event occurred for the company, with the opening of the first store exclusively Juvenia in China. And today there are at the number of 5 (2 in Beijing, 1 in Shanghai and 2 in Shenyang )… Moreover, Juvenia is represented by 40 Retailers in Greater China (Hong Kong, Taiwan, Macau).
That shows the power and presence of the brand in the Middle Kingdom.
Although times change, Juvenia has stuck to its artistic colors, creativity, elegance and outstanding manufacturing traditions. So actually, the brand continues to share these values.

The brand is focused on the Asian market, that’s probably why we don’t really know it. Nevertheless, and luck for watch enthusiasts, Juvenia starts its expansion in France … and probably elsewhere soon, as the products are interesting.

Well we will not either rewrite history, and now we’re going to look at the watch…

To begin, I’d like to make a historical point of this watch (Yes, because we discovered it, but in fact the concept existed for about 70 years).

The SEXTANT watch was created back in the 1940s. It was offered, at Le Corbusier, in homage to the amazing architect that he was. Not to mention that her favorite things, was the protractor, the ruler and the compass needle. 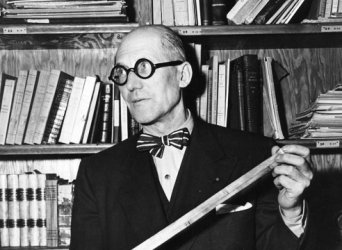 Juvenia is established since 1860, in La Chaux de Fonds, where Le Corbusier was born:

“Charles-Edouard Jeanneret-Gris”, (his real name), was born on October 6, 1887, in La Chaux-de-Fonds, Canton of Neuchâtel, Switzerland, and died on August 27, 1965, in Roquebrune-Cap-Martin in France. He’s best known under the pseudonym of “Le Corbusier”, and was a famous architect, planner, decorator, painter, sculptor and writer, Swiss by birth and naturalized French in 1931. 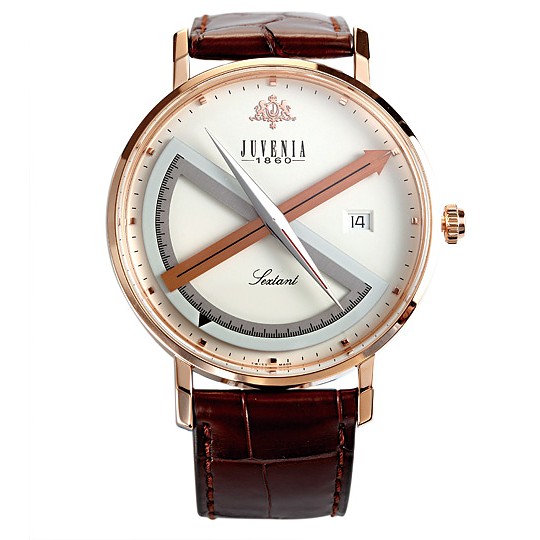 My first reaction about the Sextant was “Wow – what’s that ?”. That’s an extraordinary watch that has distinctive hands like no other.
And indeed this watch is often called the Protractor or the Architect, in reference to the protractor-shaped hour hand, golden ruler minute hand, and a second hand that resembles a pointer in a vintage magnetic compass. So I asked myself  “How does it works ? What’s in this watch ?”.
This watch has a Self-winding mechanical movement, based on ETA 2892-A2 (which is not bad at all), and that gives it an additional argument. 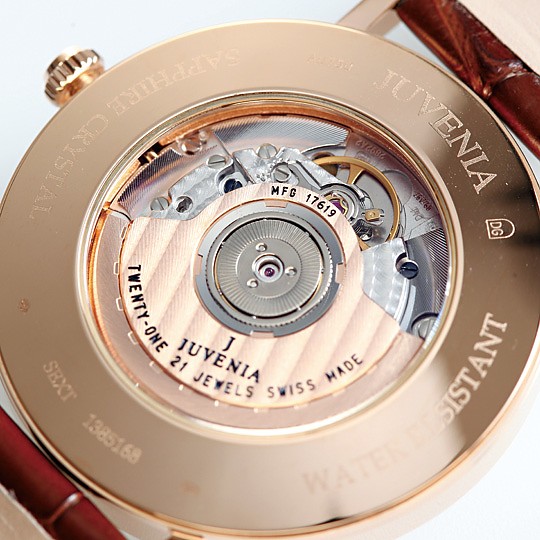 For my part, I’m not a big fan of the mix, red gold and brown strap. But it gives a very classy look, which goes well with a suit and tie.

I would really fall in love with it if it came with a platinum case, white dial, and the hour hand in blue, gray for the minute, and a white and blue second hand, with a black croco strap… even with a black dial. A good idea for a limited edition, or customization. Well, I’m not the product manager of the brand, but it could be fun. 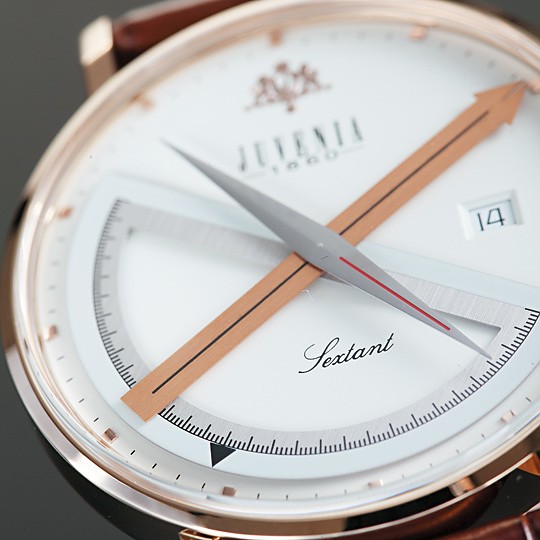 So, lets now stop talking and take a look at the technical characteristics of the Juvenia Sextant.
MOVEMENT : 11’½ J015 (base ETA 2892-A2) 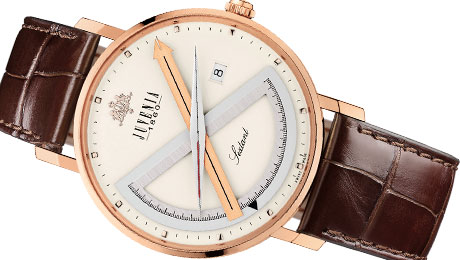 The watch comes in different versions, red gold, stainless steel, and with white or “gray” dial, and the price will be approximately 9.550 € for the red gold, and 3.700 € for the stainless steel version – which will be their bestseller for sure. Not that bad for a classy and unusual timepiece!! For more info, please visit juvenia.ch 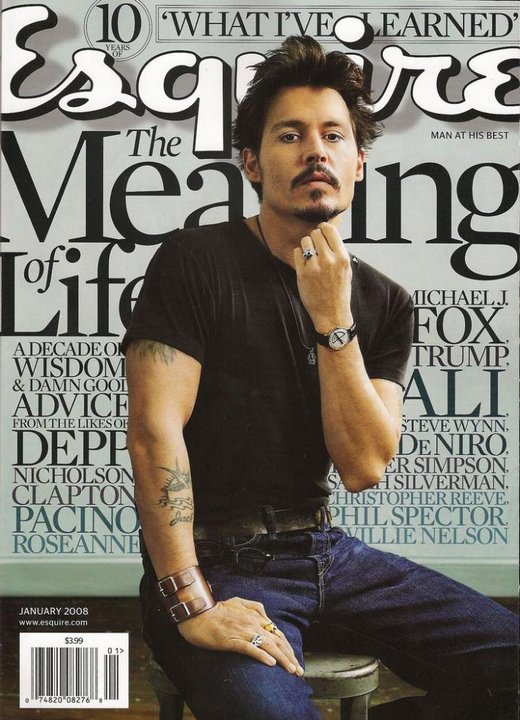 Johnny Depp in Esquire Magazine with a Juvenia Sextant on the wrist.