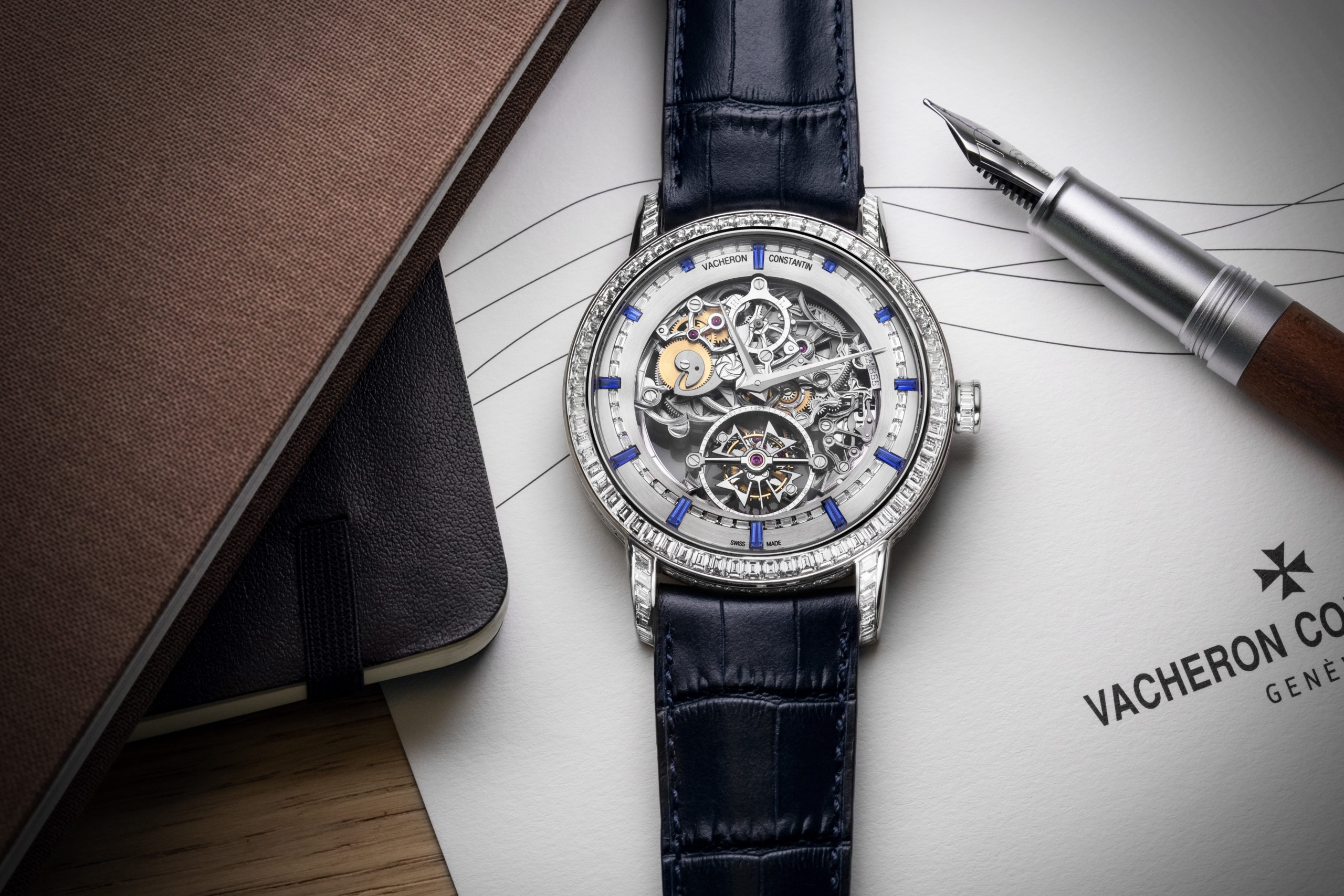 The minute repeater is a particularly rare complication. Due to its high complexity, often being dubbed the hardest complication to make, the minute repeater is seldom seen in the watch world and is reserved for the elite watchmakers. It’s rather unusual for a brand to have more than three or four minute repeaters at any one time, so, for Vacheron Constantin to introduce loads of them all in one go, we know something’s going down behind the scenes. Perhaps they’re striving for domination of the 2020 GPHG contest? 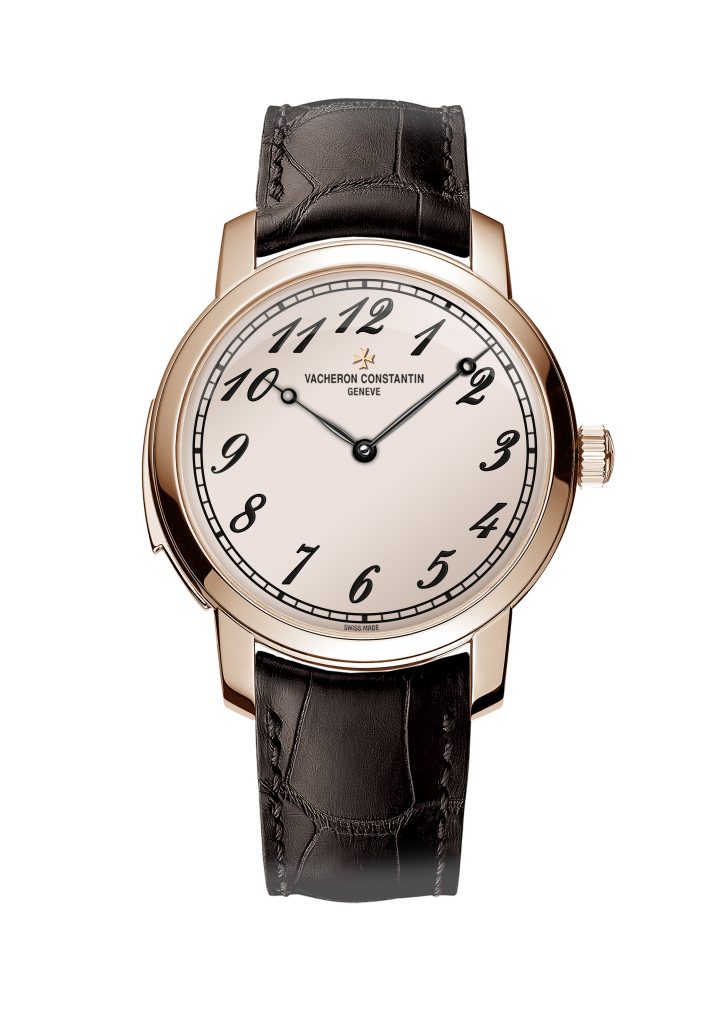 Let’s start with what is probably my favourite of the new watches, the ‘La Musique du Temps’ version of the new minute repeater collection. It’s subtle in its 41mm rose gold case with charismatic italic Arabic numerals on the dial. They’re quite similar in appearance to the numerals found on the Historiques American 1921 watch, but longer instead. The movement inside is calibre 1731; it’s 3.9mm thick and has a 65-hour power reserve. Also, the sound of the minute repeater has been recorded and certified by Abbey Road Studios, which has captured the exact sound the minute repeaters create. This connection with Abbey Road Studios extends across the entirety of the new line of minute repeater watches.

A pair of his and hers watches makes up the ‘La Musique du Temps’ range of watches, too. Both watches have an eggshell-coloured enamel dial that has markers made of set rubies, and the ladies watch, measuring in 2mm smaller than the gents piece, also has a diamond-set bezel too. Both watches also use the same calibre 1731 movement as the previous watch, displaying its versatility across a range of watches.

Also in the new ‘La Musique du Temps’ range of watches comes this charmer, the Sixth Symphony watch contains three complications in one. As well as having a minute repeater like the other two watches we’ve seen so far, it also includes both a grande and petite sonnerie. You might have confused these terms before, but it’s essential to know that both forms of the sonnerie are different from a minute repeater, though a grande sonnerie includes a repeating function. In a grande sonnerie, the watch strikes the time at the hour, and every fifteen minutes it strikes both the current hours and the current quarter-hours. A petite sonnerie does this too, but it doesn’t strike the hours at every quarte-hour, so when it’s six-thirty, for example, it will only tell you that it’s two-quarters past an hour, but you’ll need to look at the watch to learn the hour. A minute repeater strikes both hours and quarter-hours on demand, activated by the wearer. The calibre 1860 inside this watch is the same as we saw in their ‘Les Cabinotiers Symphonia Grande Sonnerie 1860’ watch from SIHH 2017. Also, the sides of the case are decorated with an engraving of an excerpt of the score to Beethoven’s Sixth Symphony.

Four different versions of the ‘Four Seasons’ watches appear in this collection, each one both demonstrating Vacheron Constantin’s artistic ability with dials, but also their technical expertise in terms of movement making. The dials of these watches all display carp swimming at different times of the year, the four seasons. Each dial uses champlevé enamelling as the base, with gold used to separate each section of the dial. Fifteen individual firings create the deep and vibrant colours seen on these watches, with a tourbillon fitted with the Maltese cross sitting at 6 O’clock.

A more restrained variant in the ‘La Musique du Temps’ range of watches comes with a more straightforward dial that has been offset. At first glance, this guilloché-dialled watch appears more restrained than the enamel watches we’ve just seen, at least upfront. Around the back is where it gets more interesting, though, as the calibre 2755 TMRC features a sky chart. It corresponds with sidereal time; thus, it makes one rotation every 23 hours and 56 minutes and has been decorated beautifully. Vacheron Constantin has also pointed to its 250th-anniversary piece, the Tour de l’Ile as inspiration for this new watch.

Two watches make up this entry into the new minute repeater collection, one in white gold and one in pink gold. There’s no tourbillon here. Instead, we find a perpetual calendar put inside these pieces. Along with the minute repeater, you’d think this perpetual calendar watch would be quite hefty, but the Swiss don’t tend to do big and heavy watches unless they have no choice. These watches have cases measuring 42mm in diameter and 10.44mm thick, with the calibre 1731QP movement inside the cases measuring a quite incredible 5.7mm in thickness. 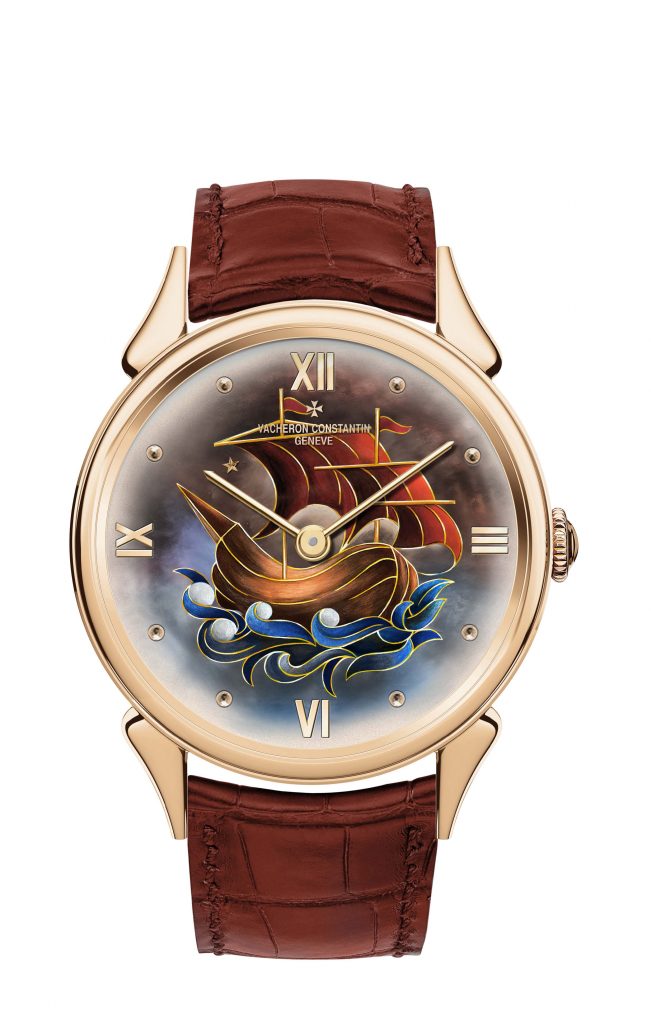 Now we find ourselves moving aware from the ‘La Musique de Temps’ range of watches, but sticking with the ‘Les Cabinotiers’ line of exceptional watches. This one uses the 1950s case style that Vacheron Constantin has been putting to good use recently, the horn-style lugs give this watch a unique appearance, as does the dial. Made of fired enamel, the dial of this watch represents a Portuguese caravel ship, used by Portuguese explorers. This watch does not contain a minute repeater, but the calibre 4400 is no less striking (I’ll get my coat). 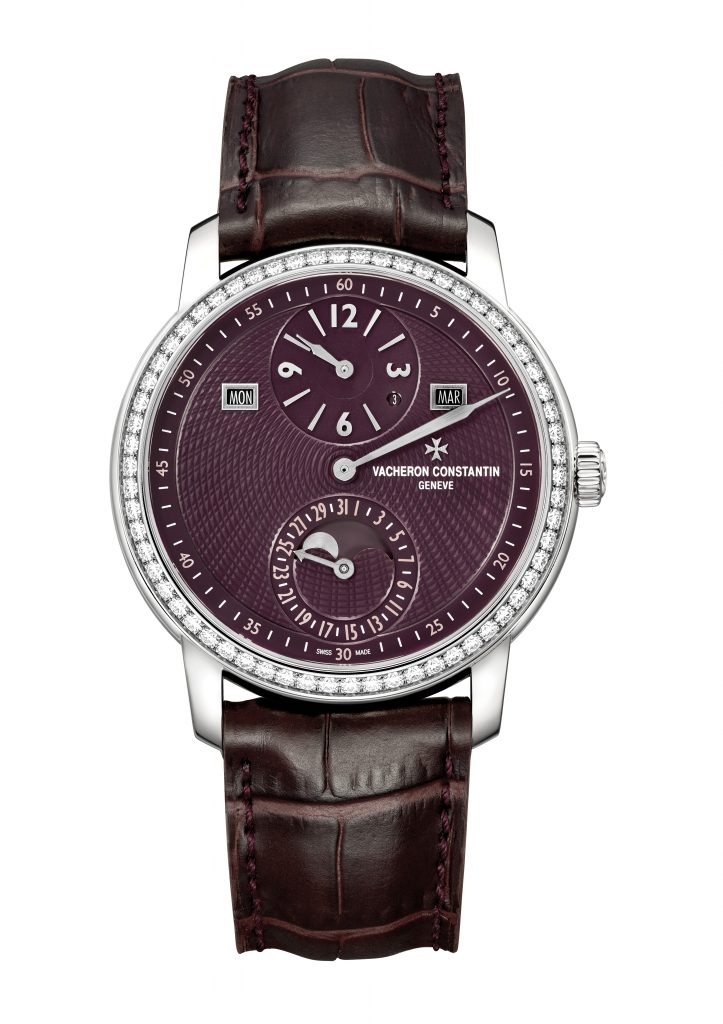 The regulator is perhaps one of the more unusual forms of displaying the time, but that’s an old saying that I’ve used countless times before. Regulator clocks were used as the primary timekeepers in the 17th and 18th century, in fact, right up until the digital age took over. They were highly accurate, as they set the reference time, the minutes taking priority and therefore having the entirety of the main dial to themselves. The plum-coloured guillocheé dial on this watch is no different, though it has a few peculiarities. I like the hours subdial, with the Arabic numerals that are oriented towards the centre, except for 6 o’clock for obvious reasons. This watch hides most of the complexity of the 2460 RQP’s perpetual calendar very well, and the 62 brilliant-cut diamonds are sure to distract even further. An odd choice of colours, in my opinion, but balanced very well here. 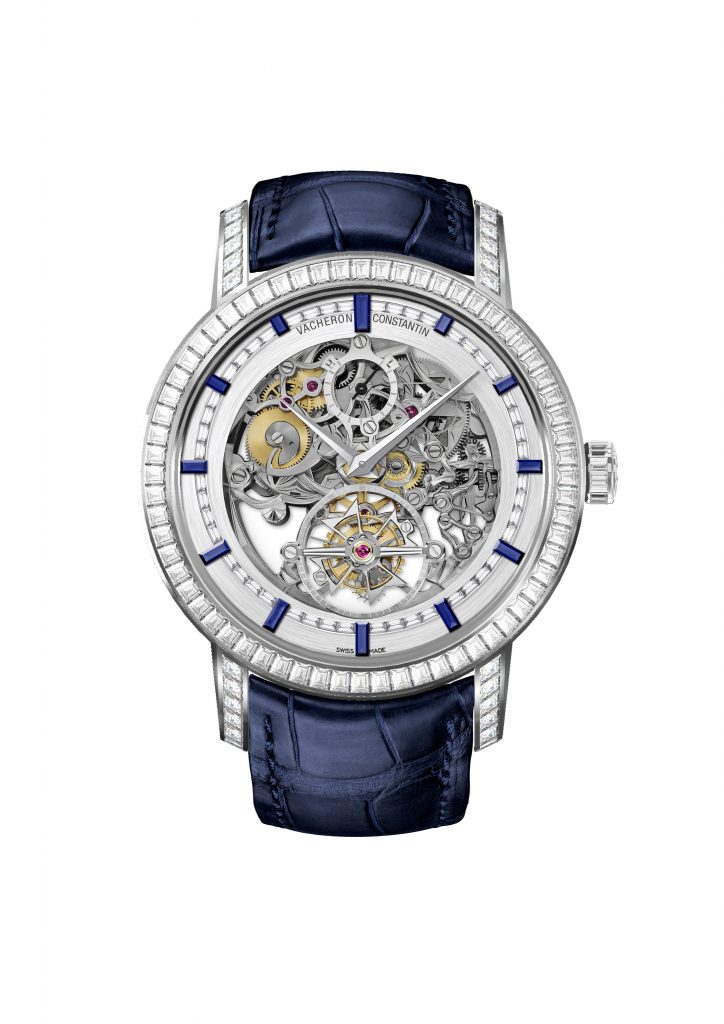 The next entrant into the ‘Les Cabinotiers’ lineup is this exceptional piece. Featuring a diamond-set bezel, crown and chapter ring as well as skeletonisation, polishing on the skeletonisation and a tourbillon this watch presents something of a visual maelstrom for the eye. The movement is the manually wound calibre 2260SQ, which has a 14-day power reserve. The white gold case is large, measuring at 46mm in diameter. It has 238 baguette-cut diamonds on the bezel and lugs, 20 diamonds on the crown and a further 48 baguette-cut diamonds on the dial itself as well as jewels marking the hours. This is extraordinary in the opposite manner to most watches on this list, which purvey their skills through quiet sophistication. This one uses diamonds, which are also excellent in their own way. 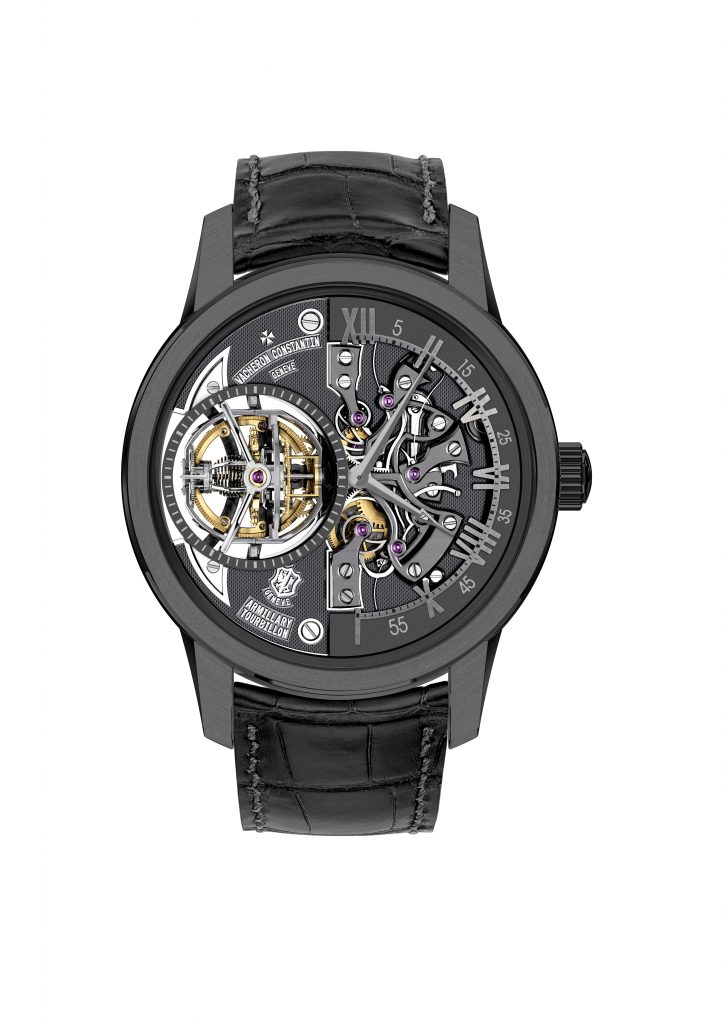 For a long time, Jaeger-LeCoultre has set the bar of high-end for watches with unusual mechanics in the Richemont group with the Duomètre range. Now, Vacheron Constantin is joining them with their ‘Les Cabinotiers Armillary Tourbillon’ watch. The right-hand side of the watch is devoted to telling the time with the hours and minutes hands set as retrograde indications. A beautifully finished set of springs and gears can be seen below the dial which demonstrates the techniques used by Vacheron Constantin to make the display possible. The name Armillary comes from the armillary sphere, a set of rings positioned around a sphere that represents either the Earth or the Sun. The rings represent the positions of various celestial bodies and has been around since the times of the Ancient Greeks, who developed an armillary sphere entirely separately of the Ancient Chinese who did roughly the same. The bi-axial tourbillon in the calibre 1990 uses a cylindrical balance spring, it gives the balance a better rate of isochronism as it lacks a terminal curve of conventional springs, the escape wheel is made of silicone, and the pallets are diamond which helps to improve long-term durability. The case is 45mm in diameter and is also 20.10mm thick, and it’s made of grade 5 titanium as well to make the movement components stand out. I get really excited when companies that most see as old and stuffy make genuinely modern and exciting timepieces that are suited for a younger generation, a wealthy younger generation no doubt.