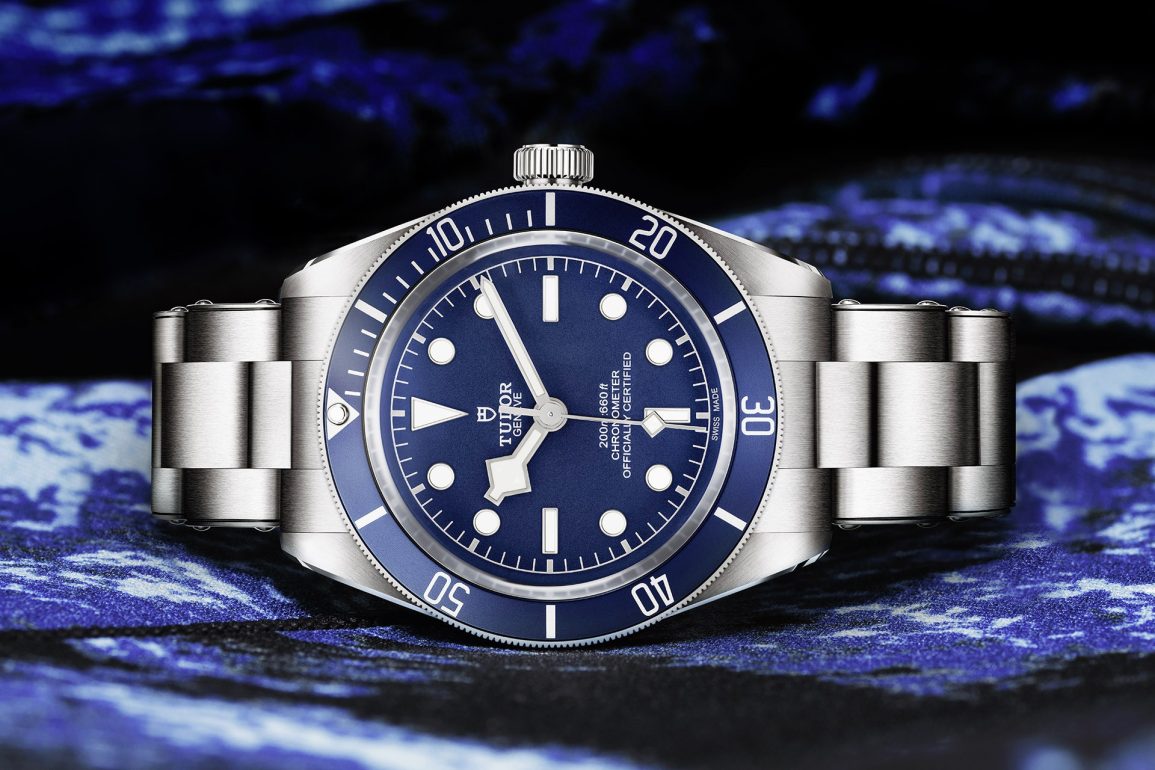 Here is a quick look at our favorite Tudor watches.

Tudor is a brand that has experienced a meteoric rise in the past decade. And, while the brand has released quite a few intriguing dressy timepieces in recent times, it is their sports watches that have resonated the most with the average watch enthusiasts out there. Today, we take a quick look at our current favorite top five Tudor sports watches. 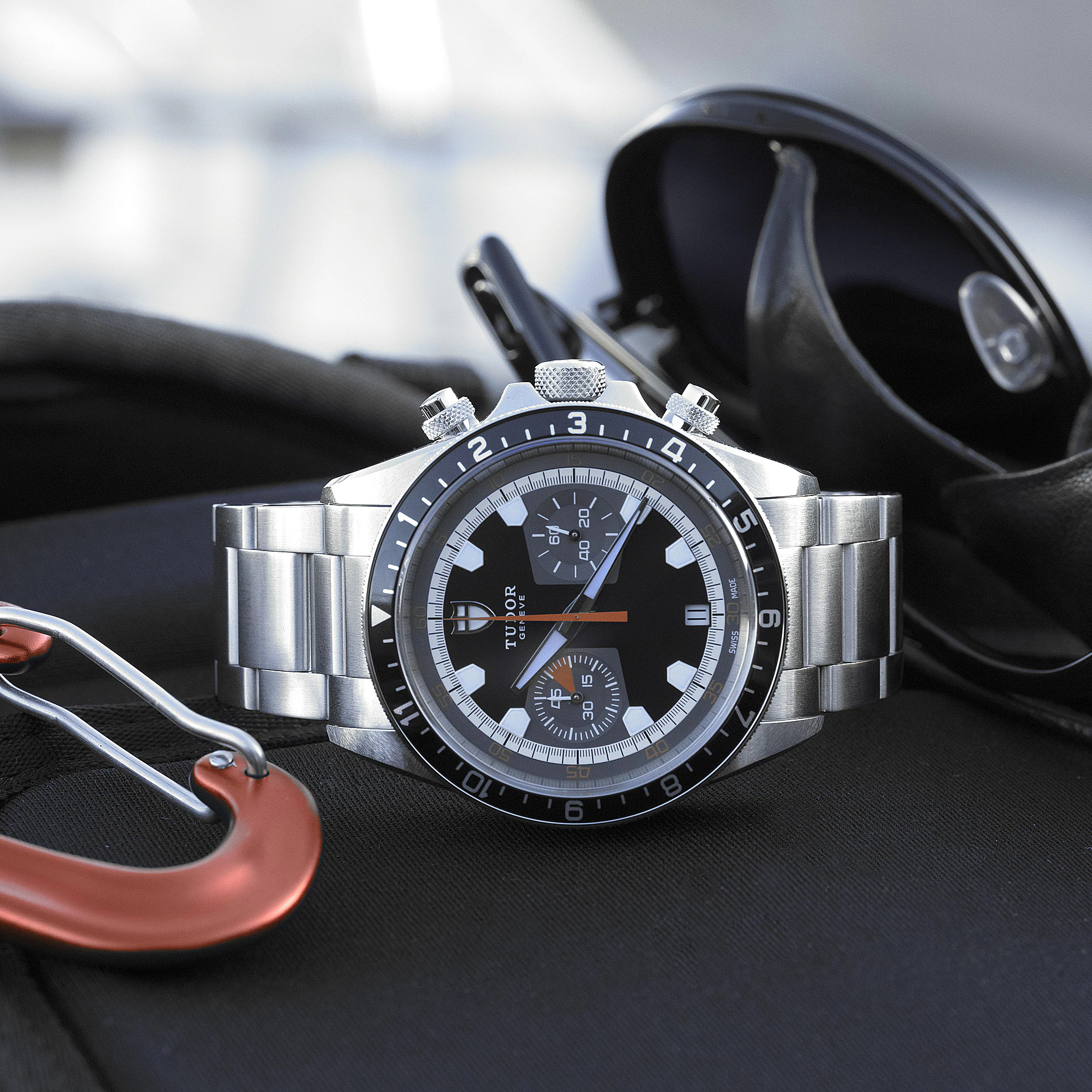 For those who thought that Tudor produces just one chronograph, please dig a little deeper in the brand’s catalog, and you will discover this gem. While the Heritage Chrono is also a vintage-inspired watch, there are quite a few interesting details that separate it from the Black Bay Chrono. First and foremost is the case, which comes in at 42mm and is just 13mm thick thanks to a slimmer modular automatic T401 chronograph movement inside. Also, the case on this watch is water-resistant to just 150 meters compared to the 200 meters of water resistance on the Black Bay Chrono. The dial still features a bi-compax layout with a date at 6 however, it is much more colorful with a grey base and bright orange highlights. Even the five-sided indices and faceted hands look quite different compared to its black bay cousins. Overall, the Heritage Chrono is a fun and underrated watch. This one retails for CHF 4,000. 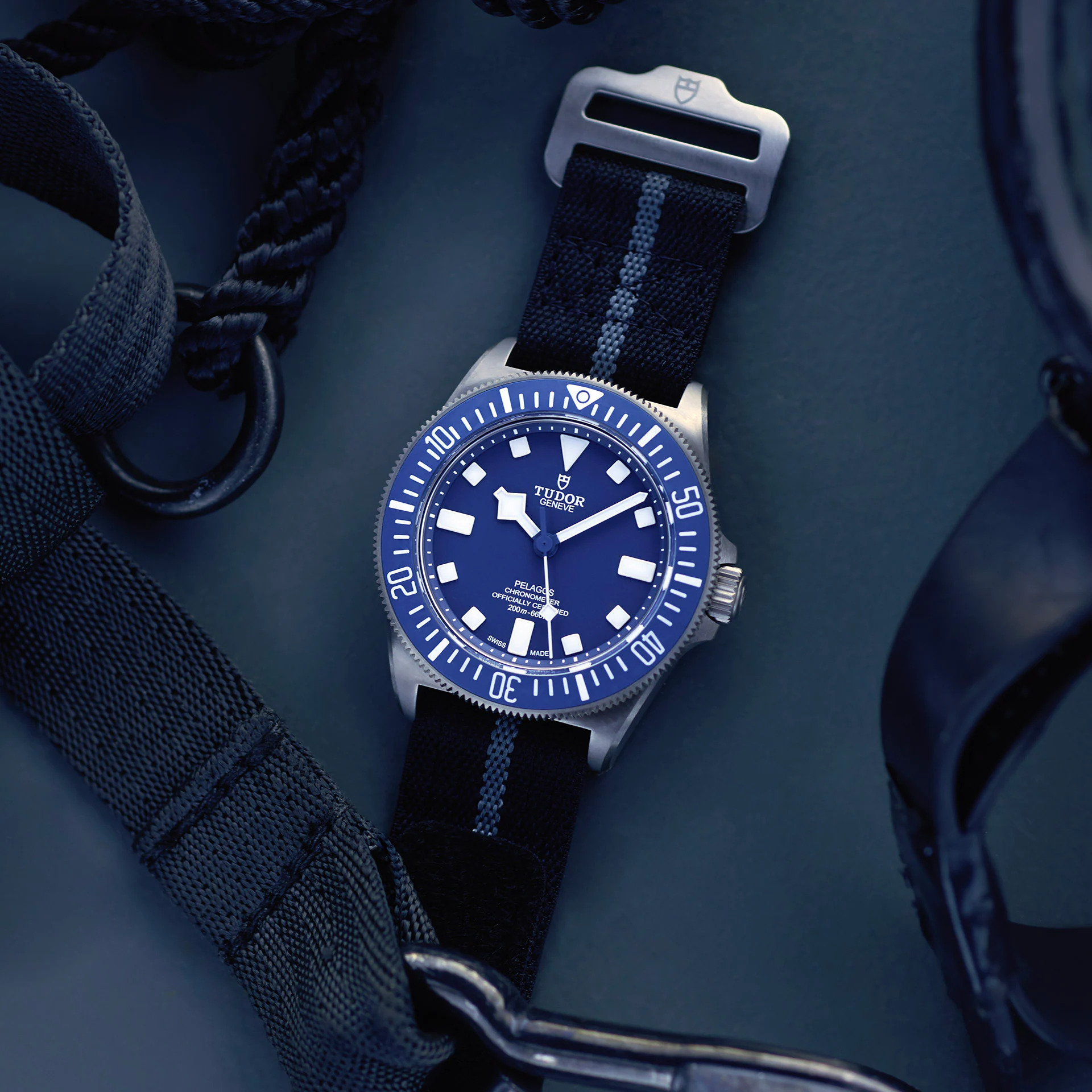 While the Tudor Black Bay line gets all the love from the community for its vintage charm, the Tudor Pelagos is the modern tool watch to beat. Featuring a Titanium case with a fully lumed bezel, an awesome titanium bracelet, and even a helium escape valve, the Pelagos is built like a tank. That said, the Pelagos still features a slab-sided construction and has a large footprint, and fans had been long waiting for Tudor to release a baby Pelagos. And Tudor seems to have heard some of its fan’s pleas, and the result is the Pelagos FXD, a new dive watch Created in Collaboration with the French Marine Nationale. The Pelagos FXD still measures 42mm in diameter, is powered by a 70-hour automatic movement, and comes with a deep blue dial like its older brother. However, there are a few noteworthy updates here. It comes with a fixed lug bar setup, a bi-directional bezel, and more importantly, is just 12.5mm thick, which should make it much more comfortable compared to the original Pelagos. The watch retails for CHF 3,700. 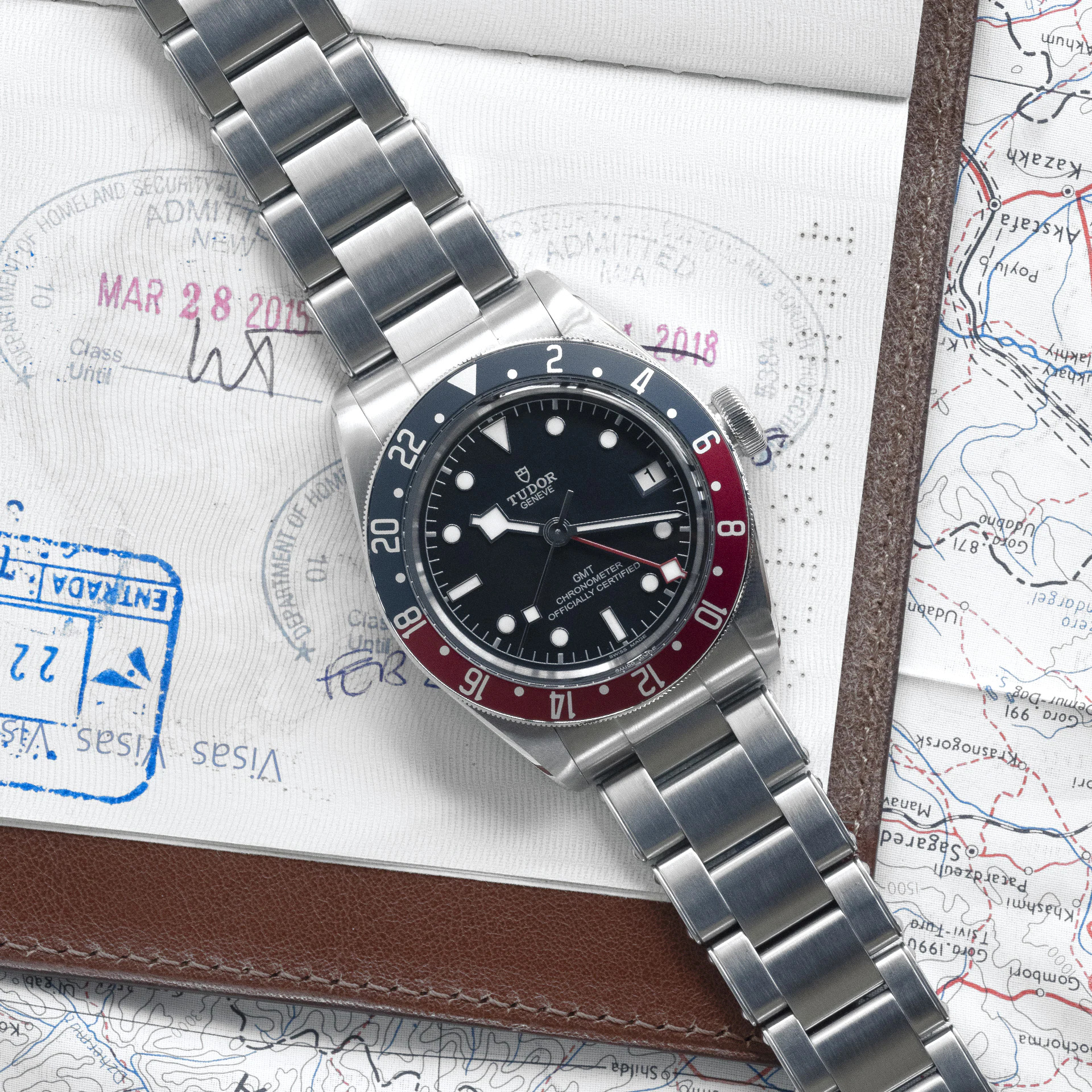 If there is one name that immediately comes to mind when thinking of Tudor, it is the Black Bay. The Black Bay GMT is a more functional and colorful variation of the Black three-hand model. Released in 2018 at the Baselworld watch fair, the Black Bay GMT features a familiar 41mm stainless steel housing that is water-resistant to a healthy 200 meters. Placed on top of the case is a bi-directional blue and red aka Pepsi bezel with 24-hour markings that can be used to track a second-time zone using the snowflake style red GMT hand. The lightly textured black dial comes with applied lume filled indices and also present is the snowflake handset along with a date window at 3. The watch is powered by the in-house COSC certified calibre MT5652 that ticks at 4 Hz and offers a power reserve of 70 hours. The watch retails for CHF 3,400 on a strap and CHF 3,700 on a steel bracelet. 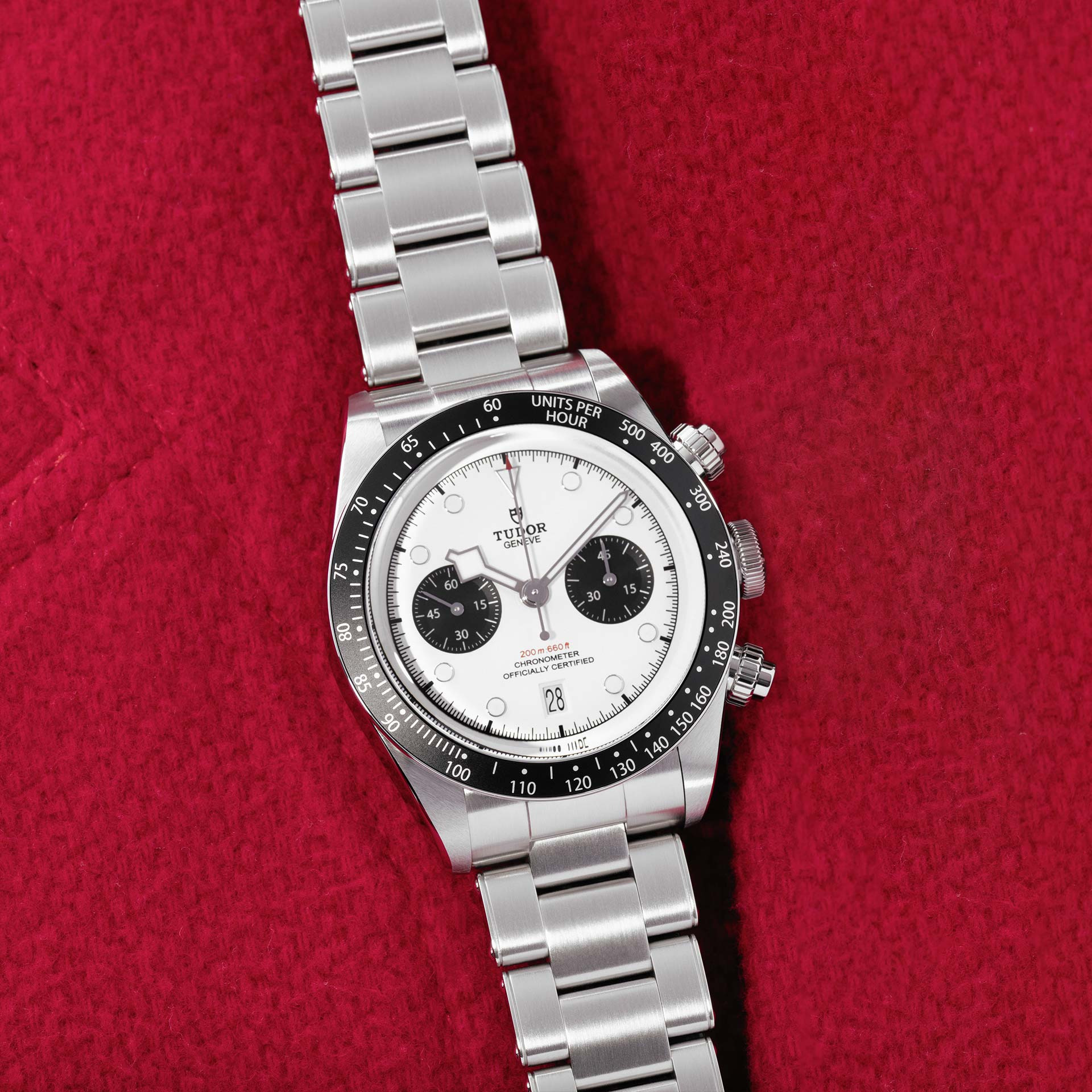 Tudor released the Black Bay Heritage Chrono in 2017. Featuring a familiar 41mm housing, a twin register layout with snowflake hands, screw-down pushers and crown, and a modern COSC certified column wheel-based movement developed by Breitling, the Black Bay Chrono became an instant hit. Last year Tudor released a slightly updated version of the Black Bay Chrono in two visually enticing colorways: Reverse Panda and the Panda (pictured here). The latest iteration of Black Bay Chrono features a 41 stainless steel case with a black aluminum bezel instead of steel and a slightly thinner profile for enhanced wrist comfort. That aside, everything remains the same, making this one of the most compelling chronographs in the town. The watch retails for CHF 4,650 on a leather strap and CHF 4,950 on a steel bracelet. 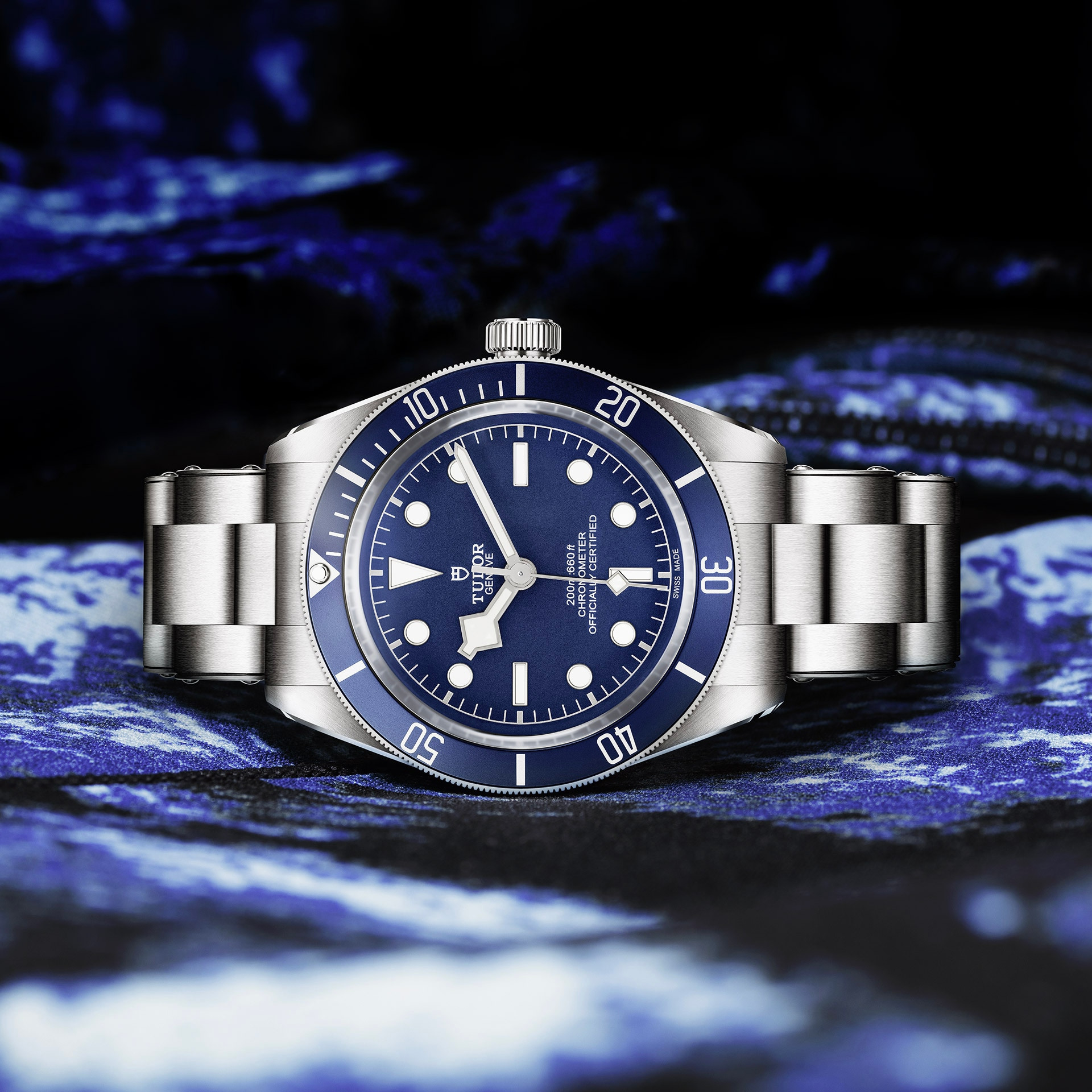 Released alongside the BB GMT, the Black Bay 58 is perhaps the most sought-after Black Bay in the market today, and for good reason. While the Black Bay Heritage and GMT models feature a modest 41mm case, the 50mm lug to lug combined with around 14mm thickness and a slab-sided case design make them a little unmanageable for people with smaller wrists. That’s where the BB58 shines. It packs the same vintage charm as its elder sibling but in a more svelte package. The case on the BB58 measures 39mm in diameter and has a thickness of just 11mm making it sit comfortably on almost any wrist. The case is still water-resistant to 200 meters and features a uni-directional bezel with a lumed pip. The BB58 comes in many different flavors and the one pictured here is the BB58 Blue with navy blue dial and matching bezel, which was released in 2020. Ticking inside this watch is the in-house COSC certified in-house calibre MT5402. The watch costs CHF 3,200 on a strap and CHF 3,500 on a bracelet.