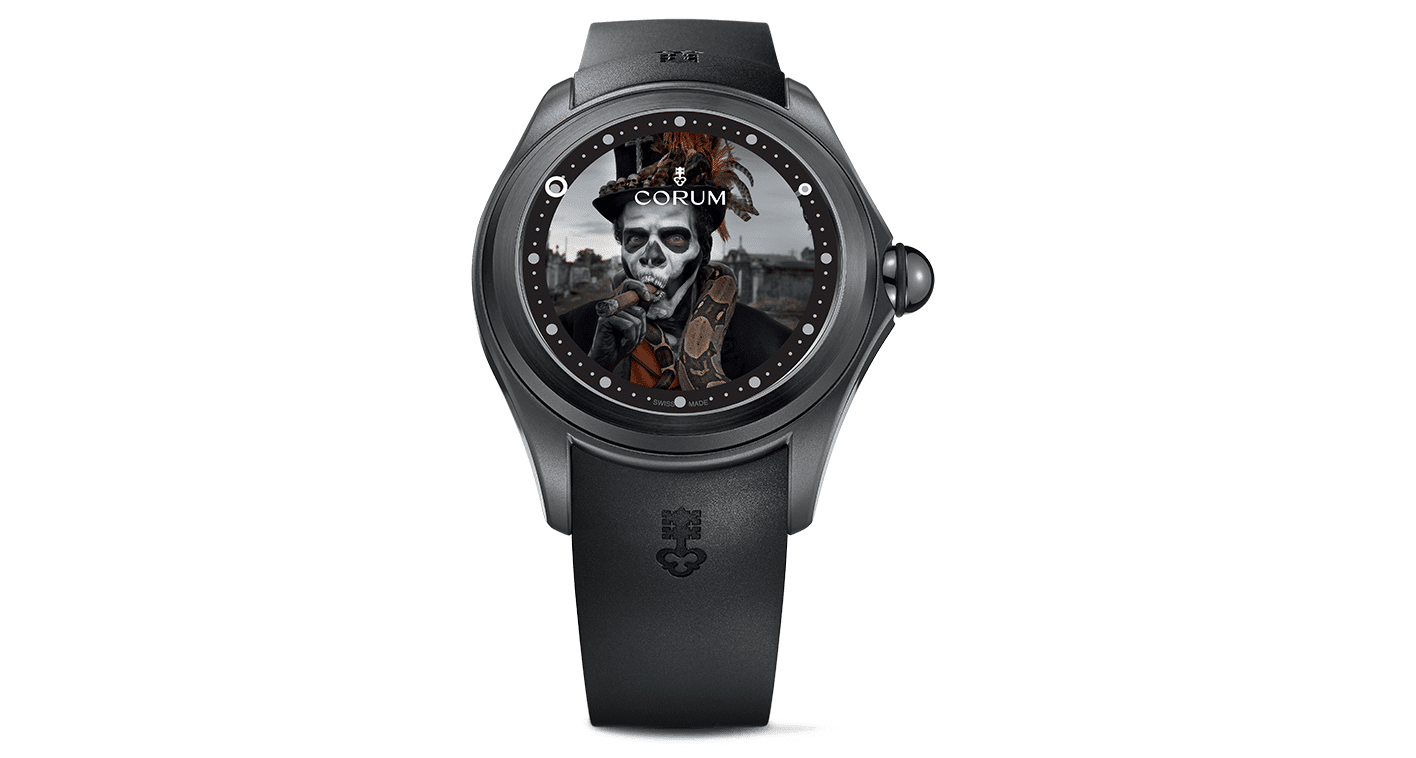 Whether you celebrate All Hallows’ Eve (that’s Halloween to most of us), Día De Los Muertos or you just fancy a go at a Pagan sacrifice ritual, we’ve got your wristwear covered. The most common themes for this time of the year include skulls and colours, which are more or less reflected in the watches on our list. So, sit back, dim the lights, grab the blanket and remember, whatever you do, don’t fall asleep. 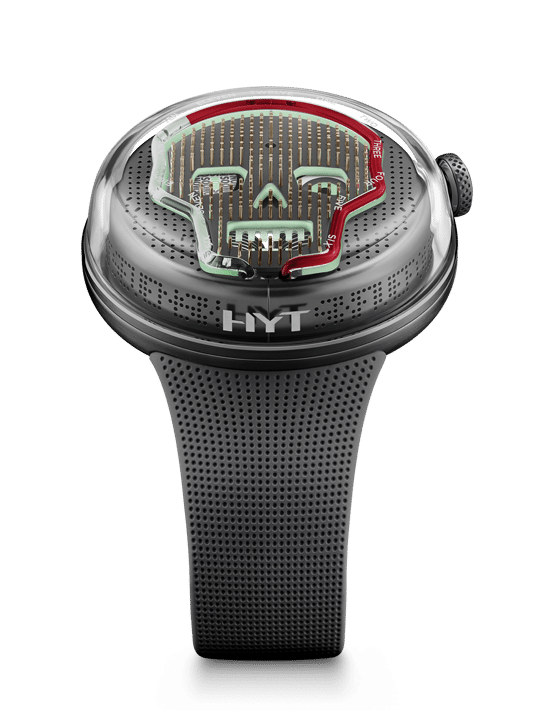 Starting off the list, we have the limited edition HYT Soonow watch, particularly the silver/black/green version. They have the crazy colours, the skull and the weird pointy bits on the dial, what’s not to love? This watch only uses the fluid to tell the time. There’s no minutes hand, so you have to guess the time, or live in the moment and use it as a simple reference for the hours. The big crystal that wraps around the movement like an upturned bowl allows for a clear view around the edges of the Soonow, though there’s more of the same circular cutouts as you find surrounding the skull dial. I’m not sure if the fluid itself is luminescent, but if they haven’t done that yet, they totally should. 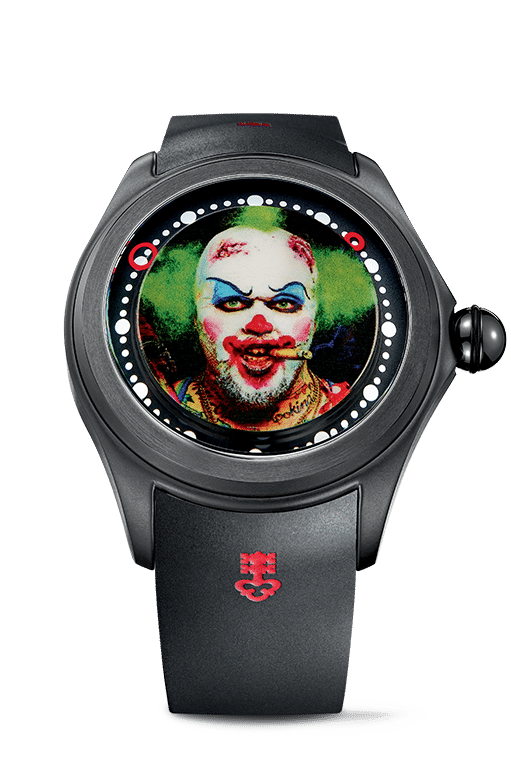 Corum Bubble watches are known for their, well, their huge bubble-like crystal that magnifies and distorts everything. It also provides a blank canvas to make something exceptional or downright unnerving in this case. Corum teamed up with Canadian photographer Matt Barnes to create this edition which uses a creepy clown as the main feature of the dial. Given that the It series of films has recently been revived and is proving to be popular, spooky clowns are bound to make a return. I wonder if Killer Klowns from Outer Space is due for a revamp? Inside the sizeable 52mm case sits an automatic movement, which is practical, the time is read by two small red dots on the edge of the dial, presumably distorted by the bubble crystal. 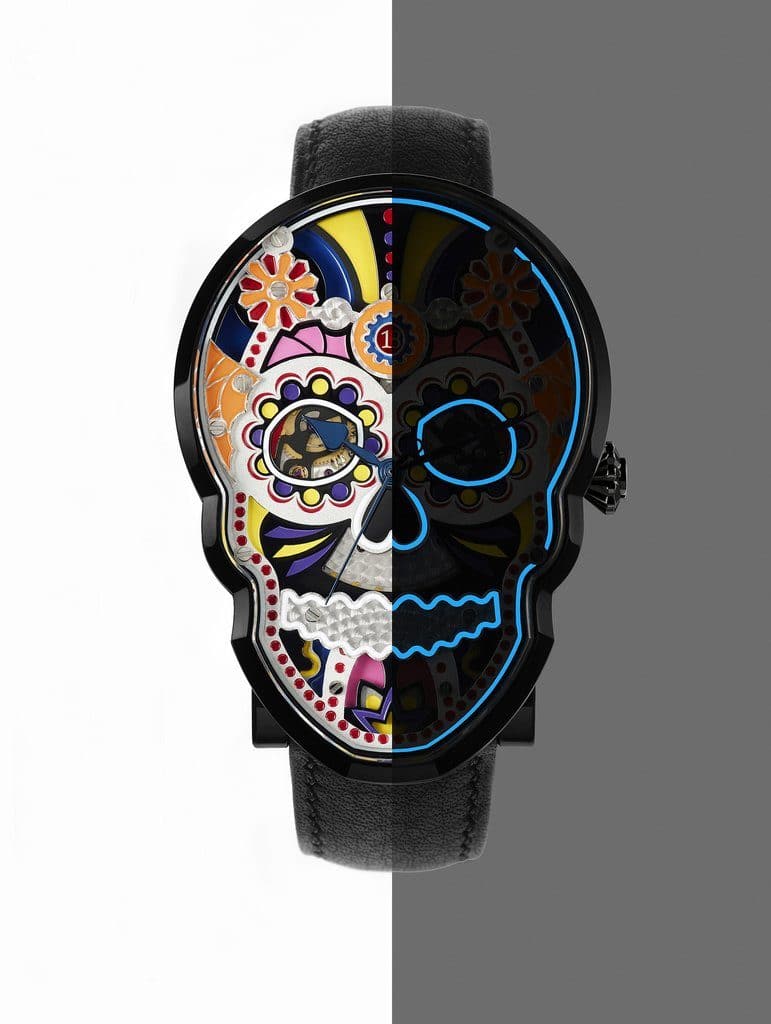 Now, I know that the pedants among the audience will be wondering why I included a Día De Los Muertos (Day of the Dead) themed watch, as traditionally it is seen as a celebration of the spirits of the deceased who return to Earth. Mourning the dead was considered disrespectful by the people in and around the Mexico region, where this UNESCO recognised celebration occurs. Think of it as the bright side of death, where people come together and celebrate in the streets day and night and celebrate this rich historical tradition. Fiona Krüger watches are perhaps the best representation of the Swiss Watch Industry’s recognition of Día De Los Muertos. The colourful Calavera (skull) dial follows the shape of the case and the edges of the skull even glow in the dark. The movement may be based on a Technotime ebauche, but it’s all about that decoration, I can’t think of another watch that takes on this theme so well. 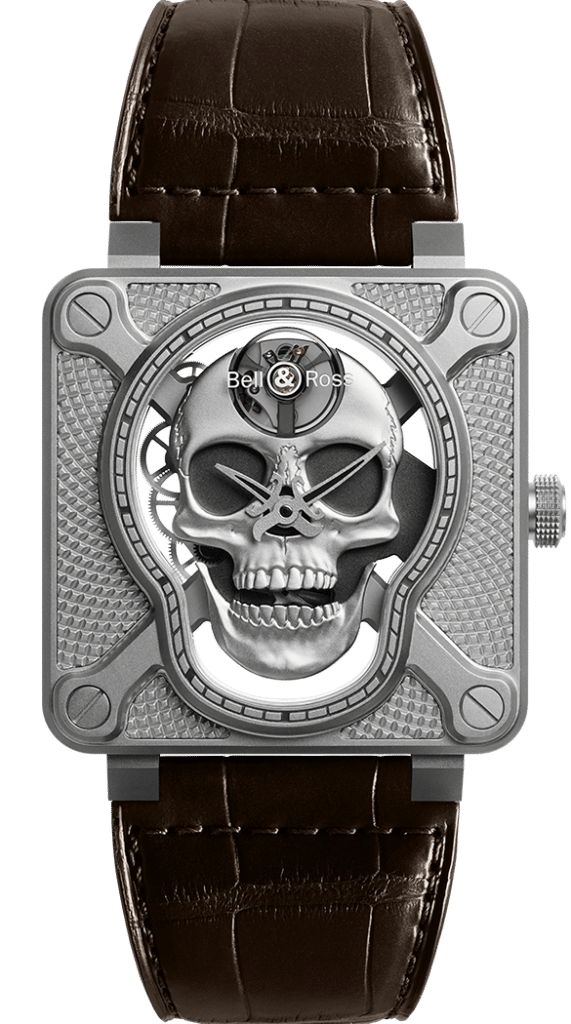 Having handled a different variation of Bell & Ross’ eponymous skull watches, I can at least attest to the sturdiness of the design and the case. It features the square case that we have come to know from the brand, but instead of black PVD and instrumentation motifs, we instead see the micro-blasted steel case receive a clous-de-Paris finish and some crossbones of course. That’s because the time dial is shaped to be a creepy silver skull, laughing at you for reasons unknown. Maybe he’s been driven mad by the escapement ticking away where his brain would have been, who knows, but what I do know is that these things are incredibly cool and are always fun to see out and about. 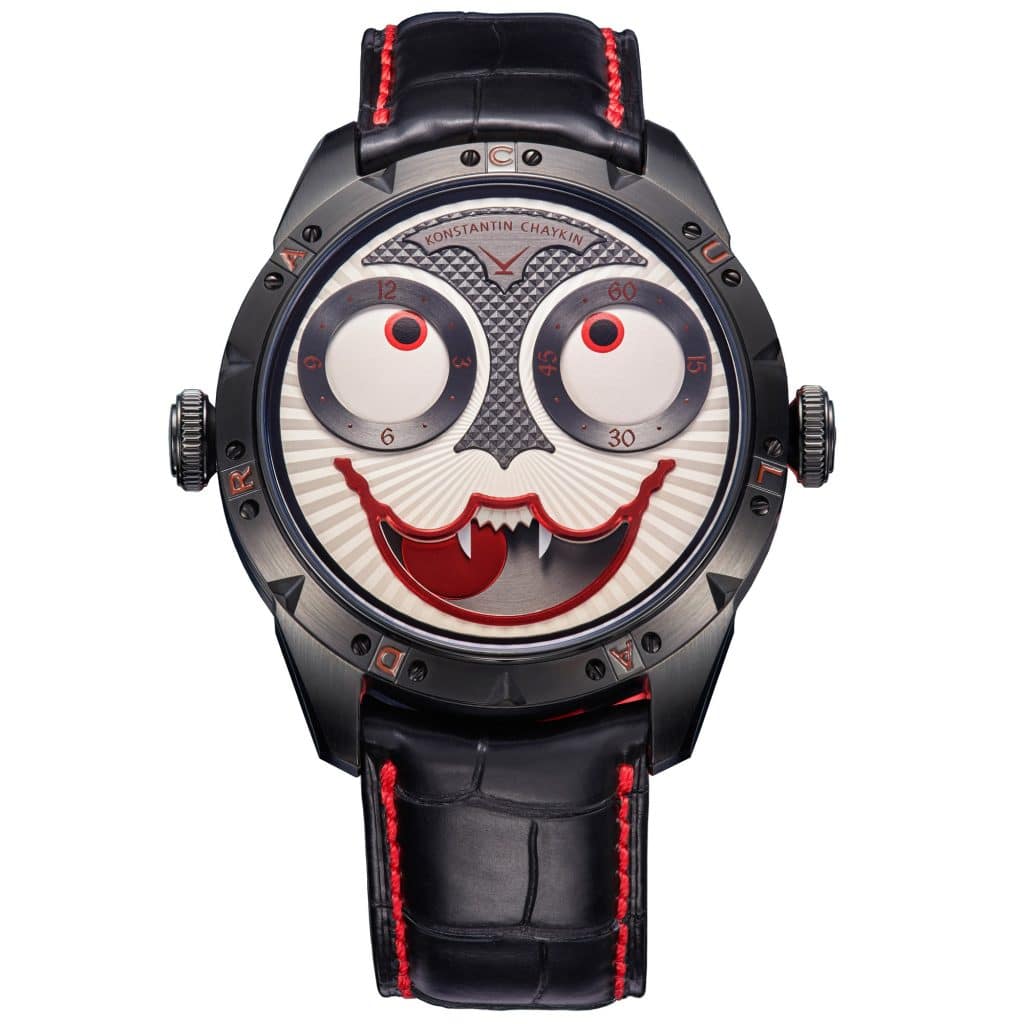 Dracula has to be one of the most iconic horror movie villains of all time, and though we all have our favourite portrayals of him (there’s only one, though, and it’s Christopher Lee. Sorry), the image never changes much. Black and red clothing, a freakish smile with googly eyes in this case, and fangs of course. These are the hallmarks of this vampire, and they can be found on Konstantin Chaykin’s new adaptation of their Joker watch. The Joker layout stays the same with the Dracula watch, the eyes rotate around as if he were possessed, but in doing so, they also indicate the minutes and hours. The mouth is still the moonphase, with a red moon depicting a blood-coated tongue. However, for this watch, they went one further. After 10 PM you get into Vampire hours, and the pointy teeth reveal themselves, before disappearing again from view at 6 AM.

So, whether you are going trick-or-treating or up into the countryside for a night of… whatever it is you do, these watches should help you go along with the mood, they mostly come at night. Mostly.