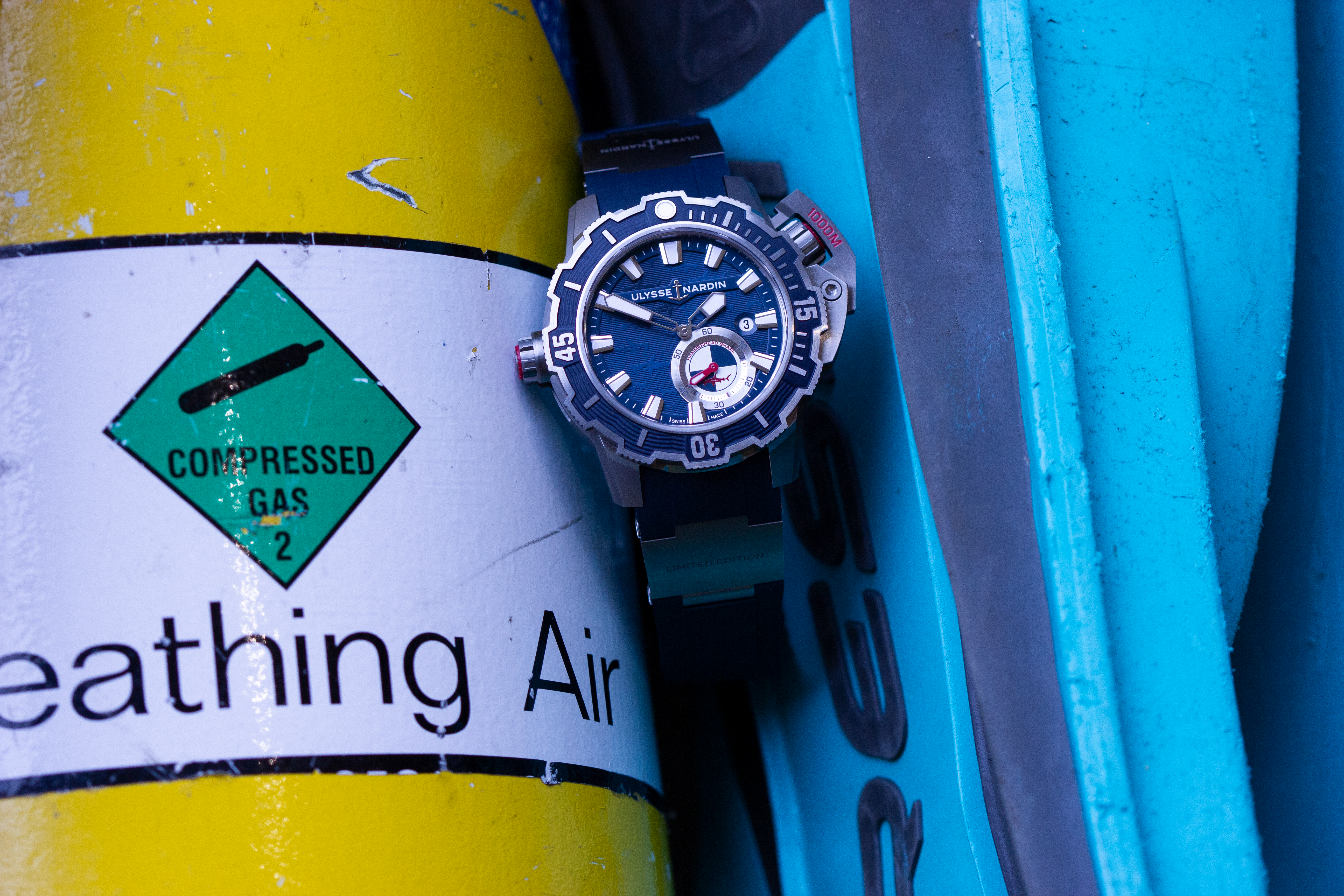 A Fortnight Review: 2 Weeks On The Wrist With The Ulysse Nardin Diver Deep Dive Watch

For those of you who love your respectful and classy watches of 36mm, look away now as the watch I’ve been getting to grips with over the past two weeks is anything but subtle. Welcome one and all to the Ulysse Nardin Diver Deep Dive Hammerhead Edition, new for 2018. We were surprised at how quickly this all came about, considering that the Hammerhead was only revealed to us back at SIHH in January. The reason for this is simple; this watch is not the finished product, it is, in fact, a prototype piece. It’s pretty much the finished piece but with a few edges here and there which we’ll go over when we come across them. 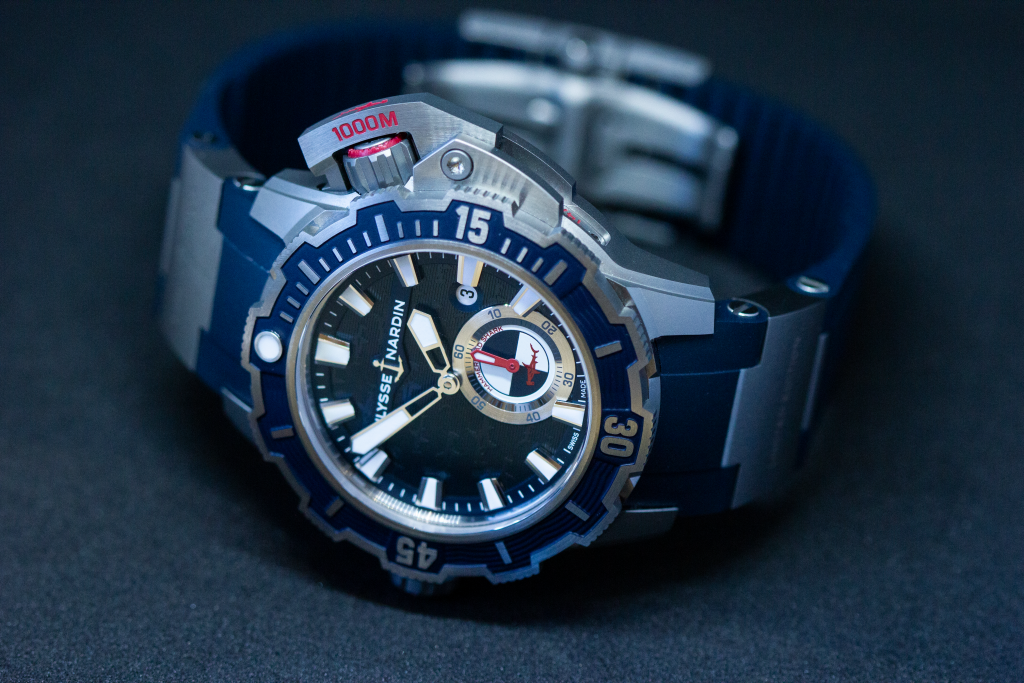 Since its inception in 1846, Ulysse Nardin has been closely associated with the waters of the sea, despite being based in Switzerland, a landlocked country. The most notable works of Ulysse Nardin are the very respected marine chronometers made by the company namesake, which ended up on the ships of over 50 different navies. By 1904, the main customers of Ulysse Nardin were the admiralties of the Russians and the Japanese, following their war, the Japanese stepped up their orders and became a key client. This strong tie in with the maritime industry is the reason for the nautical themed logo, and of course, the awesome diving watches. 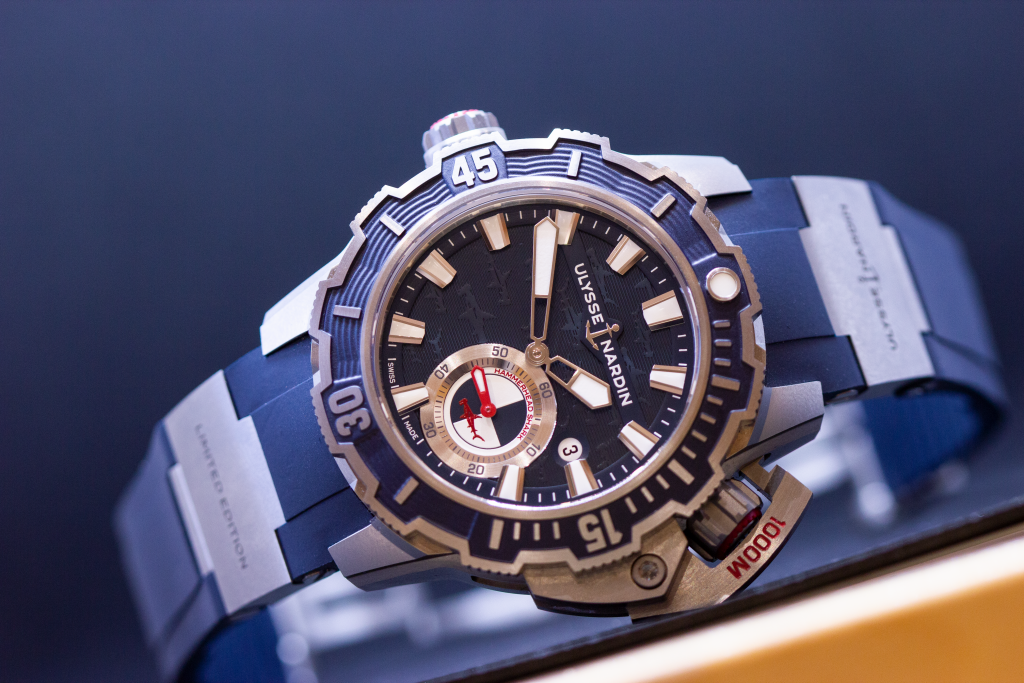 The Hammerhead pulls no punches when it comes to the size department, as you may have already guessed. Across the case diagonally, the size of the watch is 46mm, but it comes with a few scuba diving related features which push this size upwards when on the wrist. Those who have smaller wrists will struggle with this piece, not only because of the vast size of the watch head, but also thanks to the way the diving extension is built into the strap (something I’ll come onto later). The two chunks of titanium built into the strap do not allow for much room in the way of flexibility, so don’t expect them to come all the way downwards without a reasonable amount of force, something I wasn’t about to try out for myself. 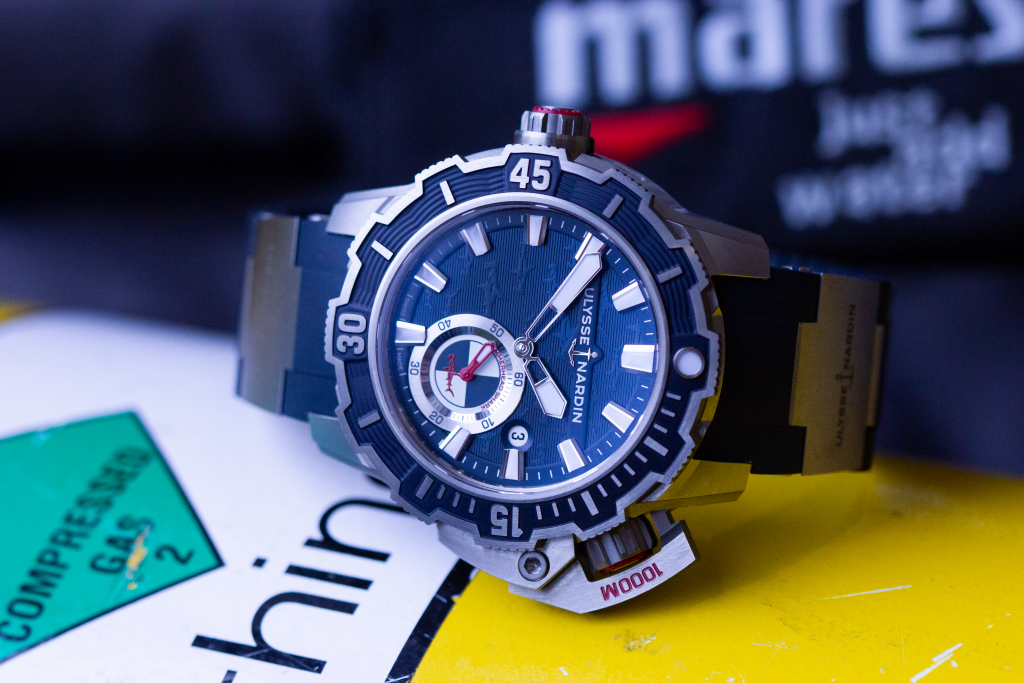 Of course, this watch could easily become overbearing and suffer from a few mass related issues. Luckily, Ulysse Nardin has thought of that; the case of the watch is made of titanium, along with all components of the strap assembly and the clasp as well. It tipped our scales at a respectable 164 grams, making it heavier than our reference timepiece, a 41.5mm SS Omega Seamaster Aqua Terra (with bracelet), by 8 grams. This weight difference is barely noticed on the wrist, though, the Hammerhead is still a light watch, especially in comparison to some other diving watches on the market. 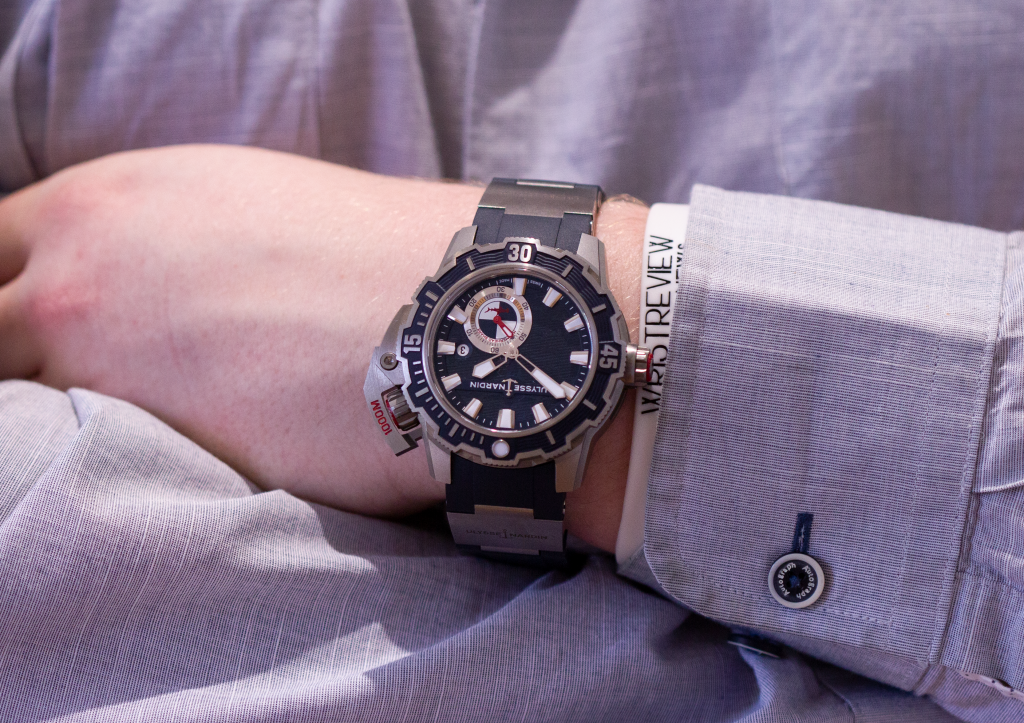 The titanium case is finished nicely, with a sandblasted appearance covering the entirety of the watch save the screws on the diving extensions and the hammerhead shark on the caseback. This aids in practicality, making the watch less of a scratch magnet, coupled with the titanium case, this watch is pretty rugged. However, the high-end finishing of Ulysse Nardin’s watchmakers has not been lost on this watch, just severely reduced. For example, the hour markers on the dial have been polished, along with the hands and the chamfered edge inside the seconds subdial. When you move the watch around it still has a bit of sparkle to it, but make no mistake this is anything but a dress watch. 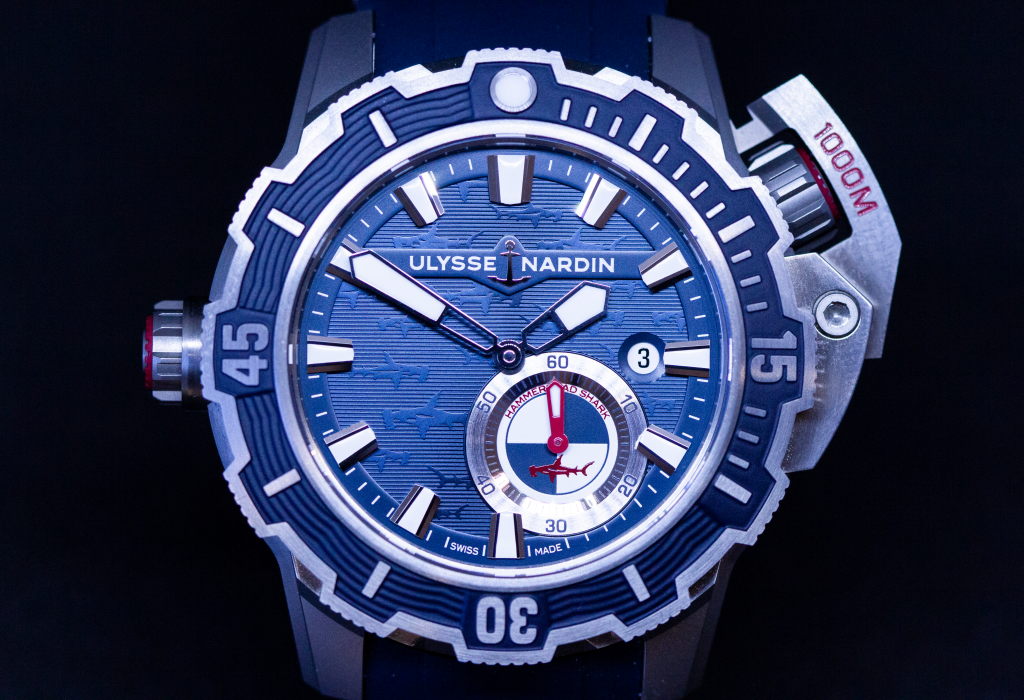 The dial is clear and legible, both in the daytime and during the night. In the former, you can clearly see the time at a glance thanks to those fat, sword-shaped hands. What I like are the hammerhead sharks which have been stamped onto the dial, though, their shape is a little hard to make out with the naked eye, lucky there’s a red printed one in the subdial. What’s not so easily observed is the red seconds hand, positioned inside a subdial. When testing this watch, it made little difference to me and ended up as an indicator as to whether the watch was running or not. Remember, seconds indications aren’t vitally important for scuba divers, who are most likely thinking a couple of minutes in advance anyway. Nevertheless, the small seconds hand also receives the same blue lume as the markers, hands and the pip on the bezel. This lume lasts for a good few hours and is very easy to see at night, if I had one comment about it I’d say it doesn’t look to be quite precise on some of the markers, you’d need to zoom in on one of the dark photos to see what I mean. 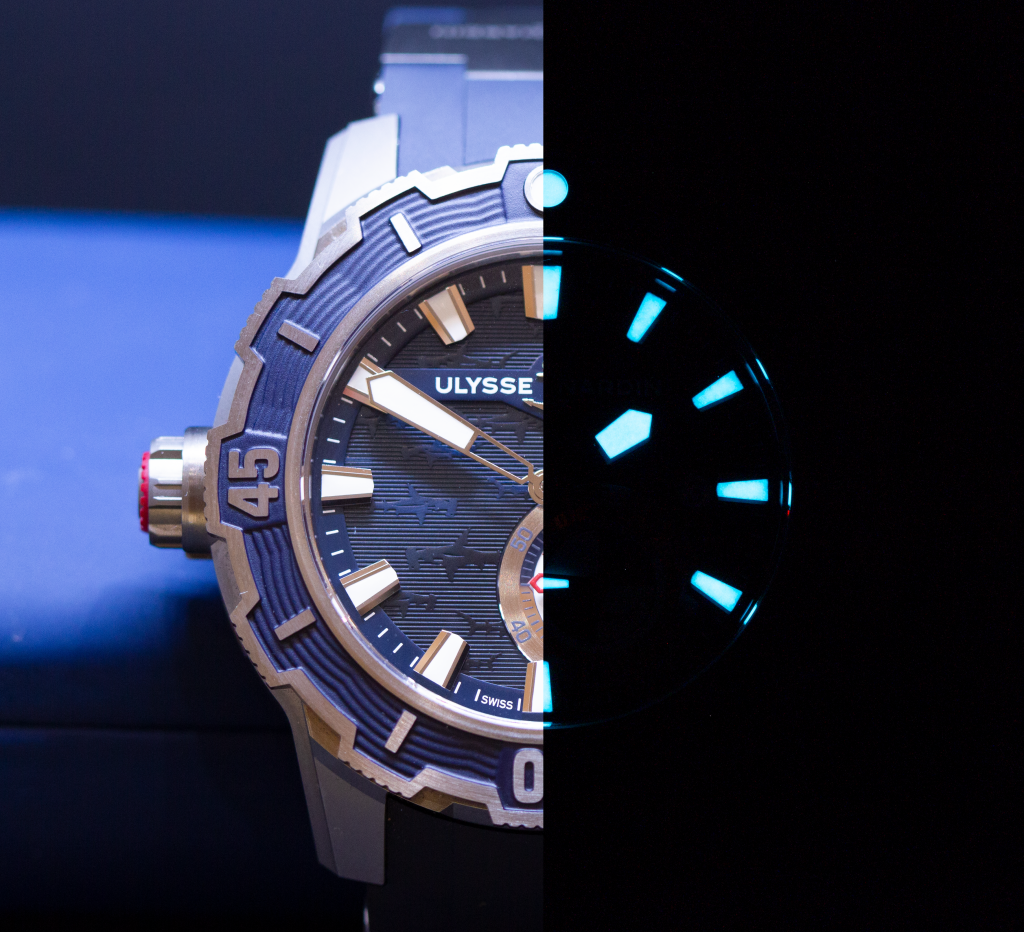 Coming onto the diving features of the watch it’s hard not to be impressed by something on it, everything feels spectacularly well made, but it’s also light like it has an aura of finesse that a Rolex Deepsea is lacking. The bezel has strong clicks when you turn it, but it’s not a fight to get it into place, mainly because of the 12 big chunky grips which also have grips on them to ease turning. The same blue lines that you find on the dial also appear on the top of the bezel, but they are much larger and have a waviness to them. 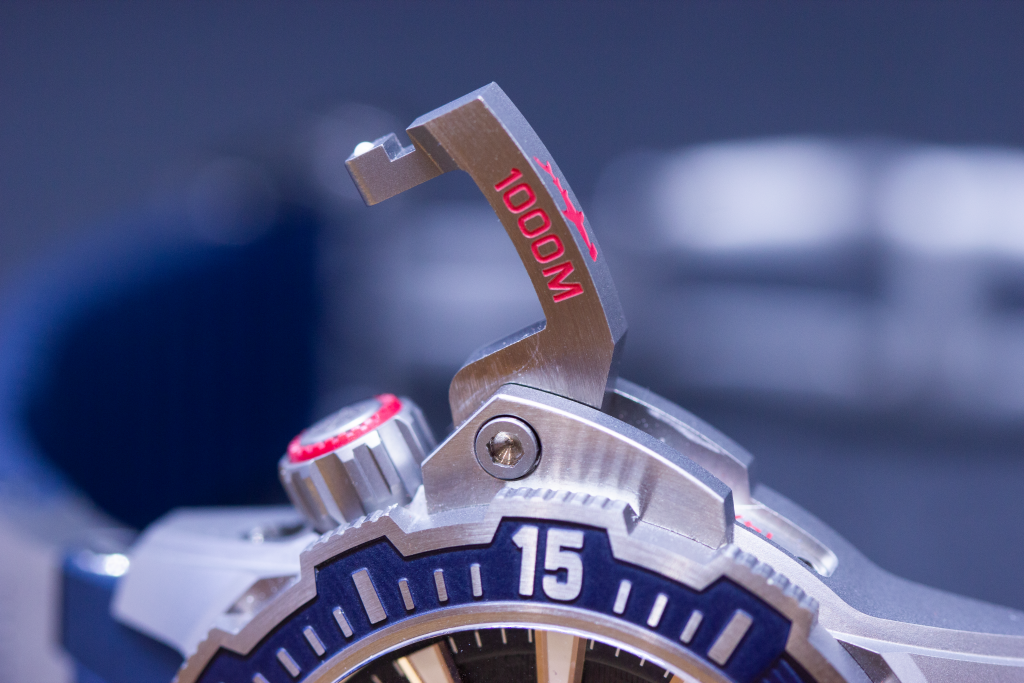 The guard over the crown is unique looking, and offers extra protection for the crown and stem from underwater knocks. It’s easy to operate and feels nice to touch. There’s a small ceramic bearing which holds the guard in place, but it’s easy to open nonetheless. This is not like the iconic guard on a Panerai; the crown isn’t connected to the guard in any way. There’s a 1000m inscription on the top, and on the side of the guard is another red hammerhead shark. I like the positioning of the crown, placing it at two O’clock gives the watch an asymmetry which compliments the expansive case and bulky bezel, also if it were in the usual position this watch would look like it had ears. Some have complained that this guard has sharp edges to it from machining, but I didn’t notice anything unusual here. 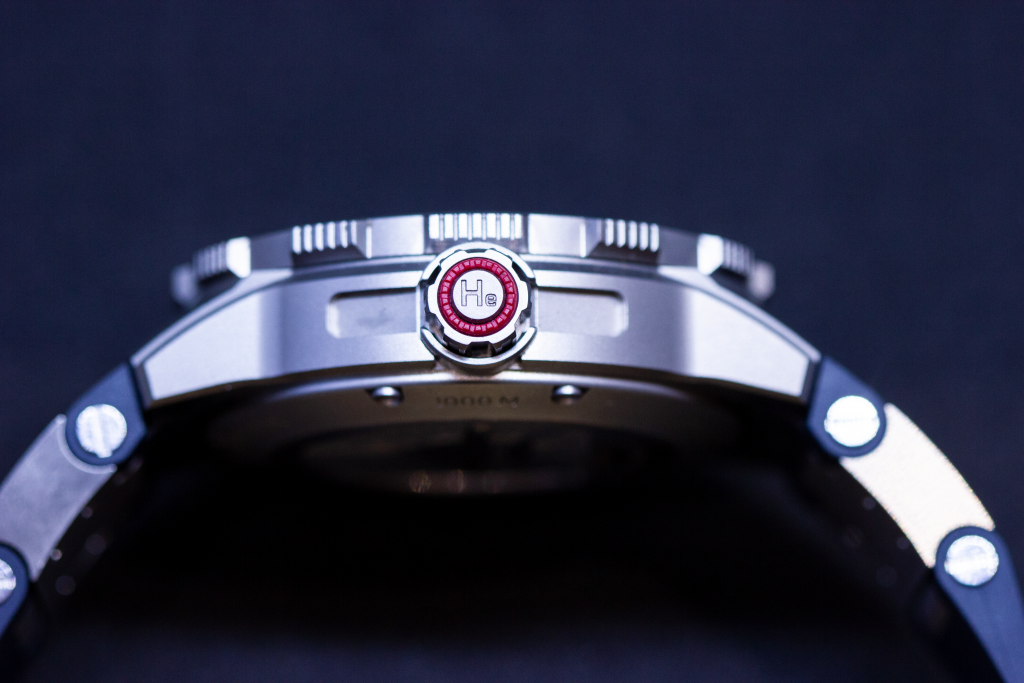 What I didn’t much care for was the operation of the helium escape valve. This is one of the parts which Ulysse Nardin has informed me will be changed for the final production run of the watches. Needless to say, after the initial loosening of the screw down crown, there was no resistance offered by the crown, making it feel cheap. 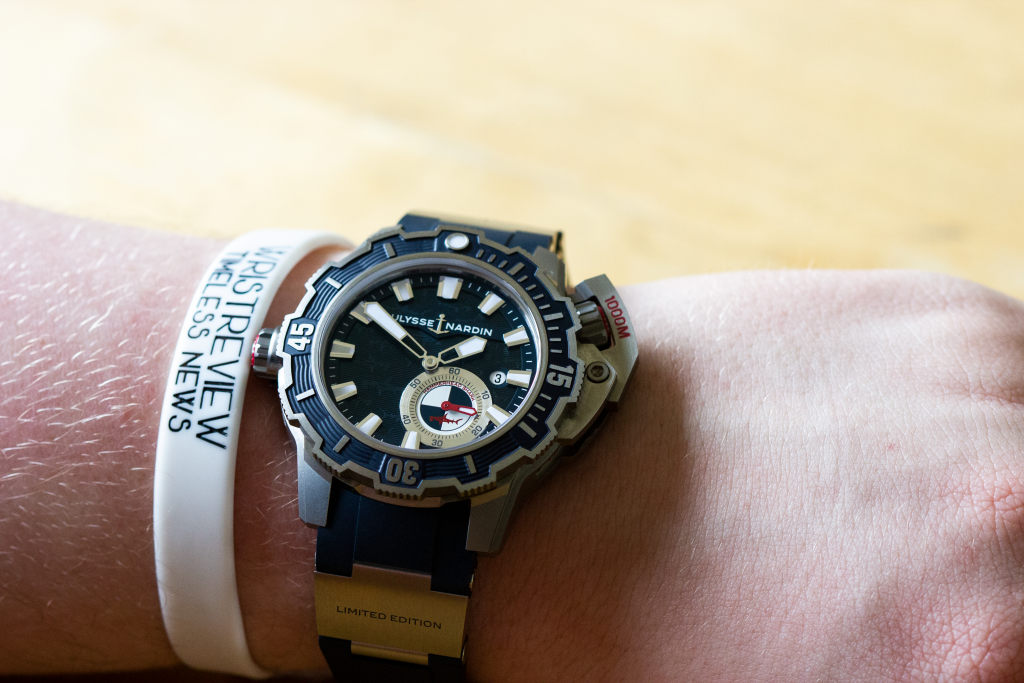 The rubber strap is high quality in both appearances and to the touch. While smooth when you touch it, the appearance leads you to believe that it’s quite coarse. Regarding overall quality, this sits somewhere between the strap you’d find on a Panerai diver and that of a Royal Oak Offshore from Audemars Piguet. There is one downside which dogged the entire review of this watch: the strap has to be cut to length. Like on Patek Philippe’s Aquanaut, you must cut this strap down to length to fit it properly to your wrist. For me, this was an issue as this is a tester watch which will be sent off to someone else for a review, so it was not possible to size the watch appropriately on my wrist. We made it work for the review, but for someone looking to buy this watch pre-owned in a few years time, you have been warned. 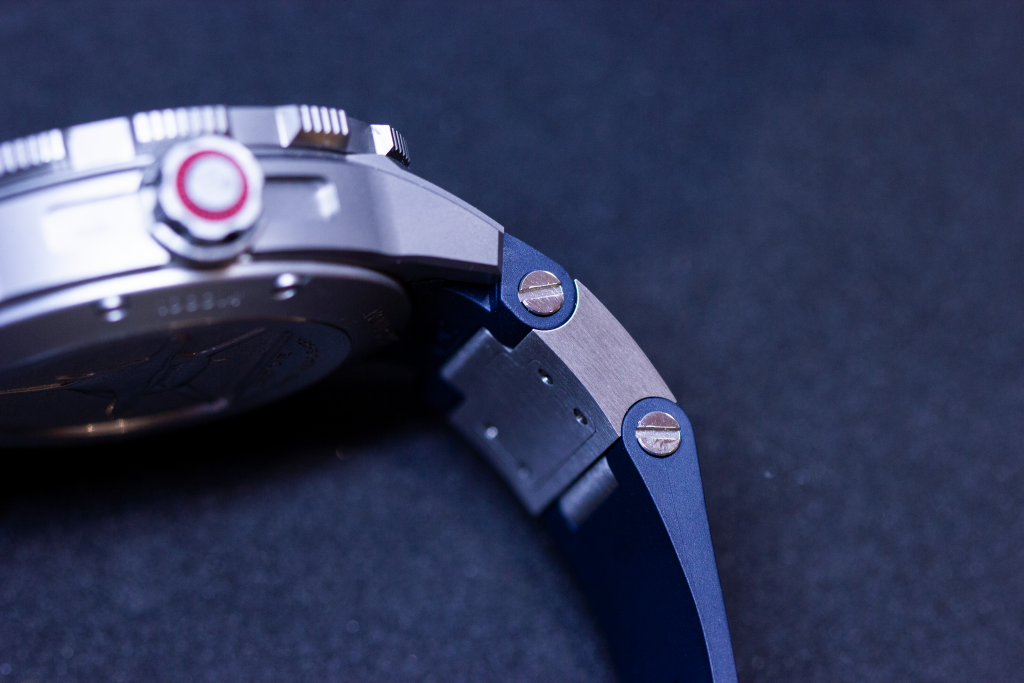 Happily, it’s not all bad news with the strap. Apart from feeling great, it’s also got a couple of unique tricks up its sleeve. I was previously unaware of this, but this watch does have a diving extension, in fact, it has two. Built into the titanium chunks in the strap are spring loaded extenders, which when pulled allow for an extra couple of centimetres of room so that this watch can go over a drysuit for scuba diving. This also means there’s an uninterrupted strap which connects nicely to the solid titanium folding clasp. 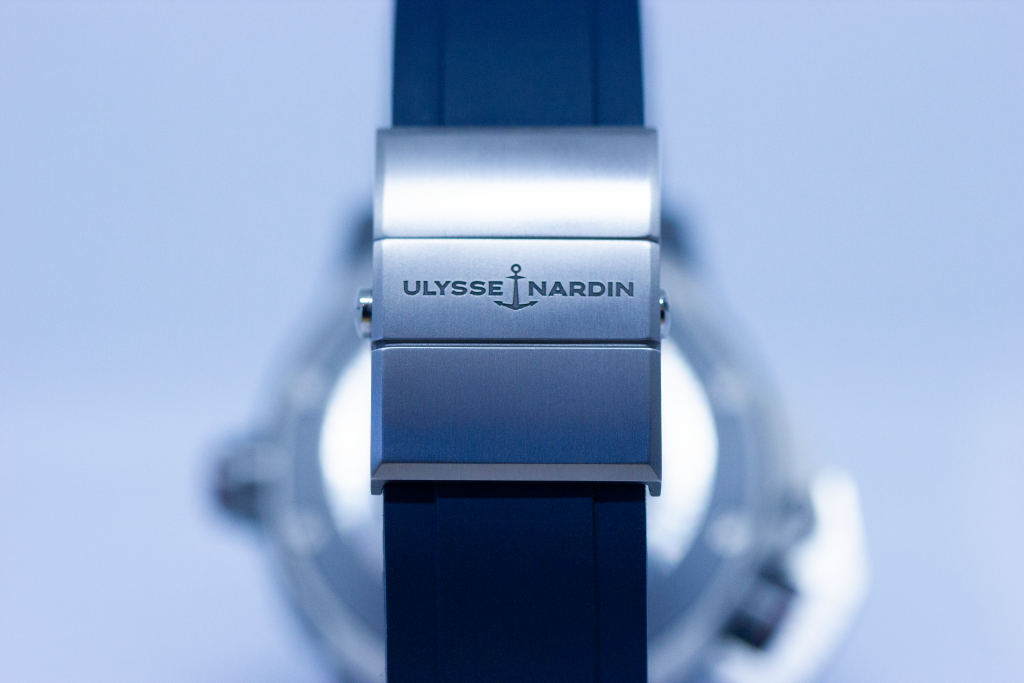 This is a butterfly clasp, like on most high-end sports watches. That means that instead of one big up-and-over movement when closing the clasp, it’s two halves which are pushed together one after the other, reducing stress on the thin parts of the clasp.  This is the second part which gave us trouble. After just over a week of use the clasp seemed to jam up and wouldn’t close flush with the fixed end of the clasp, so it looked a little wonky. Also, a lot of resistance from the clasp occurred when I tried to fold it closed, so I decided to wear it a little less often in case damage occurred. This is a real shame as it’s not expected of an expensive watch from a high-end manufacturer like Ulysse Nardin. Hopefully, this can be fixed before production. 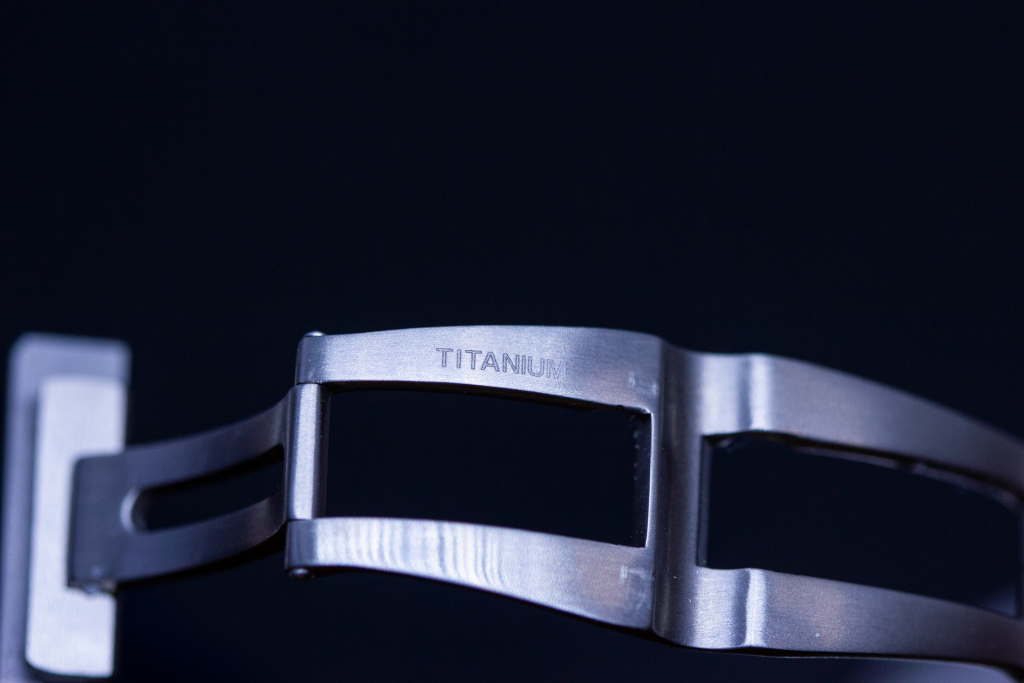 Before we venture into the case to go over the movement specifics, I want to take a minute to look at the caseback. This watch is a part of a limited run of 300 watches which have been covered in little hammerhead sharks, so it’s appropriate to use the blank canvas that is the caseback to put a big engraving of a shark on it. It looks awesome in person, and it’s evident that someone spent a lot of time going over it in detail. There is one downside to this prototype caseback; there is quite a sharp edge on the inside of that ring around the hammerhead engraving as if it hasn’t been finished after being cut by a CNC machine. That edge is the other part that Ulysse Nardin has assured me will be smoothed out before production. 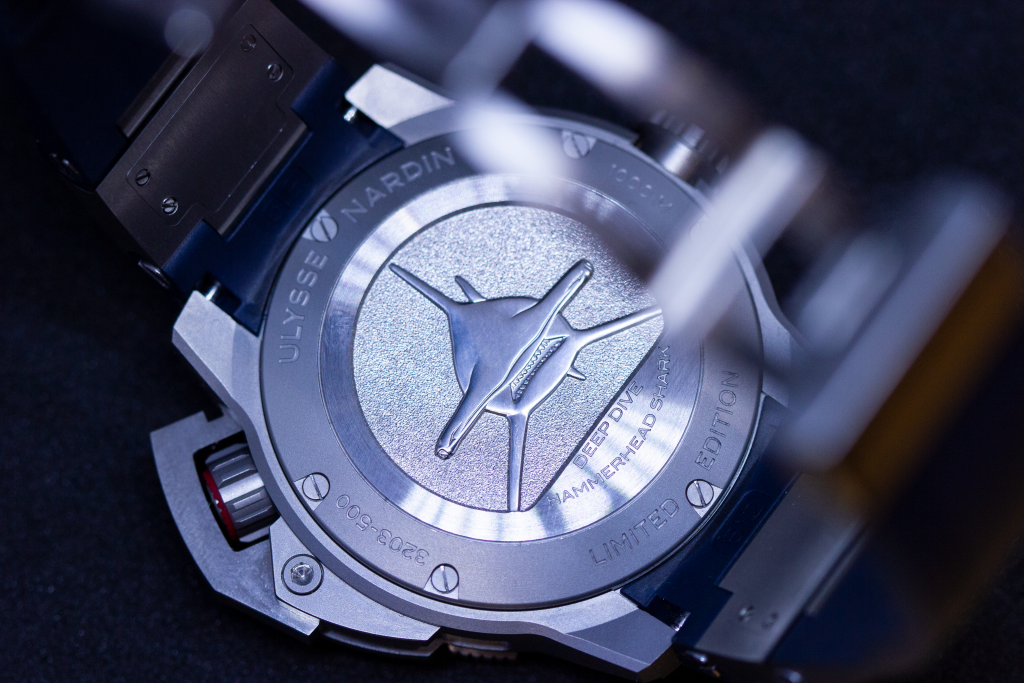 I’d like to give a special mention to the construction of the caseback. As you might have noticed, the caseback is held on with screws, 6 of them in total. Usually, diving watches with substantial depth ratings, like this one, prefer to use the ‘screw-down’ caseback, where the entire piece screws in as one unit. It’s quite uncommon to see such a rating with a watch caseback that’s held in by individual screws, so it’s a mark of quality in my books. See our Lexicon page for more information on water-resistant casebacks. 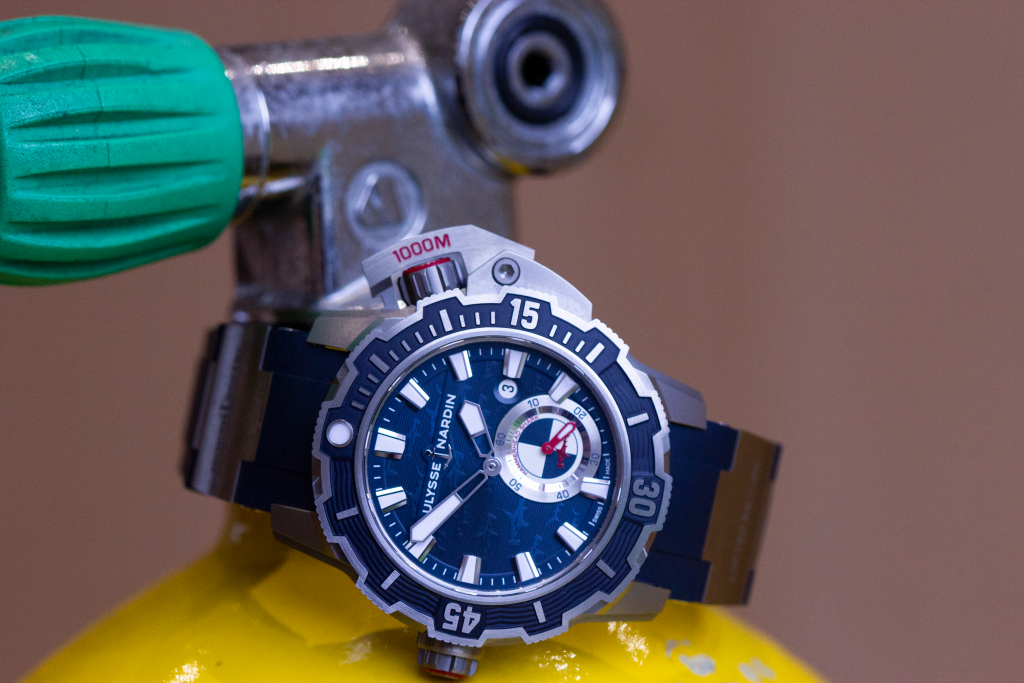 Inside the watch is the automatic winding Ulysse Nardin calibre UN-320. It’s made in-house by the company and is reasonably well decorated, while it’s not on display here there are a few watches which have an open caseback with this movement in. The spiral and anchor are made of Silicium, as expected considering Ulysse Nardin pretty much pioneered this technology for its watches. The beat rate is 4Hz, and the watch is quoted to run for 48 hours, which is about what I got over the two weeks. 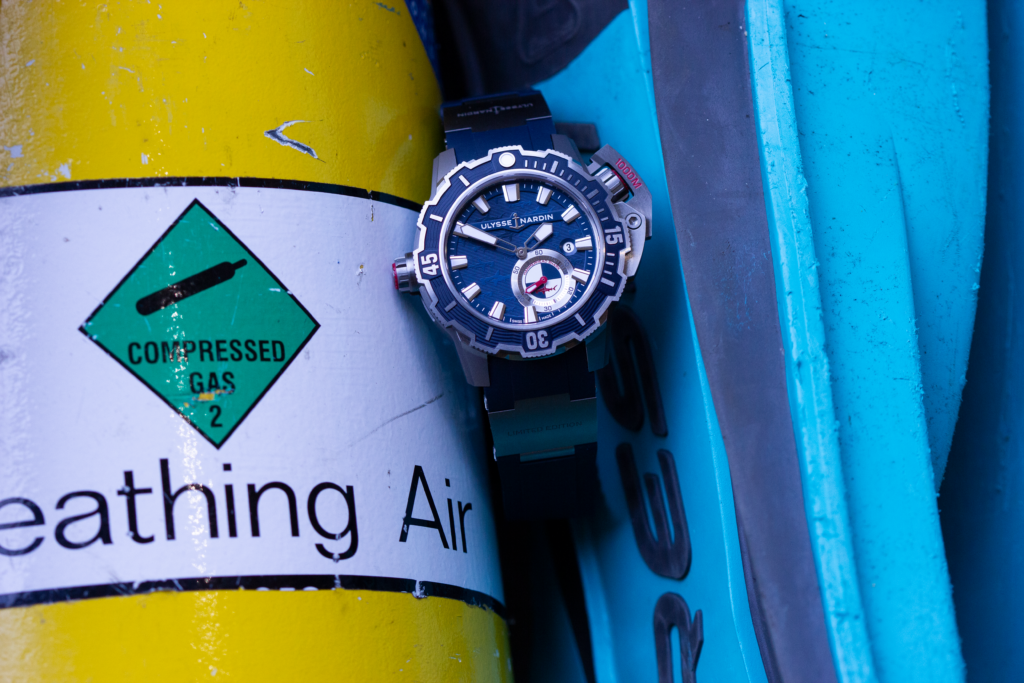 Drawing this article to a close will be interesting. This watch has several practical features which help it excel to the front of the big diving watch pack, but this particular tester marred the experience with a few prototype related issues. I do not doubt that the eventual owners of the 300 watches will enjoy them very much, they are fun to wear around and quite cool to see on the wrist. It’s also nice for those who want something with a little sophistication but have rather large wrists. This watch wouldn’t be ideal for daily wear, but I can see it being an excellent weekender for the collector who wants something both unique and robust.

The pricing for such a watch is actually quite good. The retail price is £10,900 or CHF12,000, which gets you a lot of watch (both horoligcally and literally) for your money from a very well respected, but perhaps a little unappreciated, brand. For more info, visit Ulysse Nardin online.