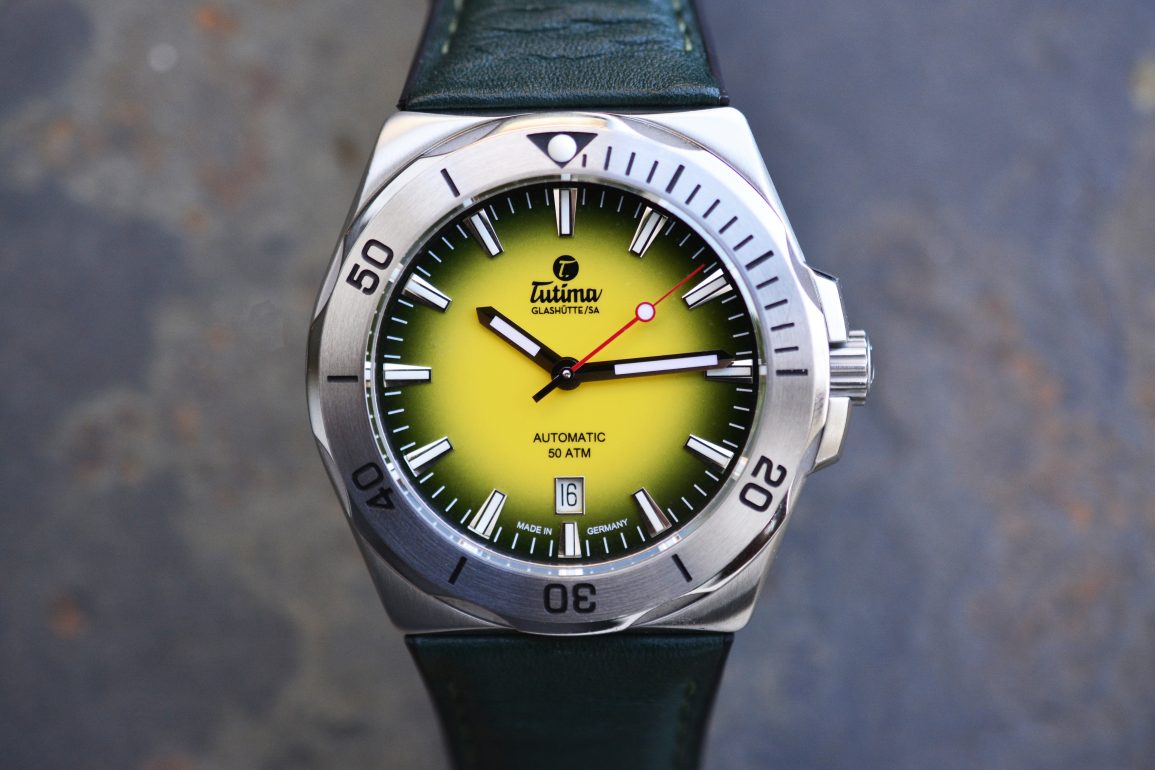 A gradient yellow dial highlights a stylish and very capable diver from Glashütte.

Independent (established) brands are somewhat of a rarity these days, especially in Glashütte. If you’re not familiar with Tutima, it offers midrange, mechanical pilot and chronograph models with a few exceptions, such as dressier pieces and a platinum minute repeater. The M2 line includes time/date watches, dedicated divers (this one) and chronographs, and the new stainless steel case is a departure from titanium used for other M2 Seven Seas models. This M2 Seven Seas “S” variant is also sportier with a simple date window, unlike day/date dials from non-S watches. Tutima is in the same general class as another independent Glashütte brand, Nomos. Other than price, however, they have very different portfolios. 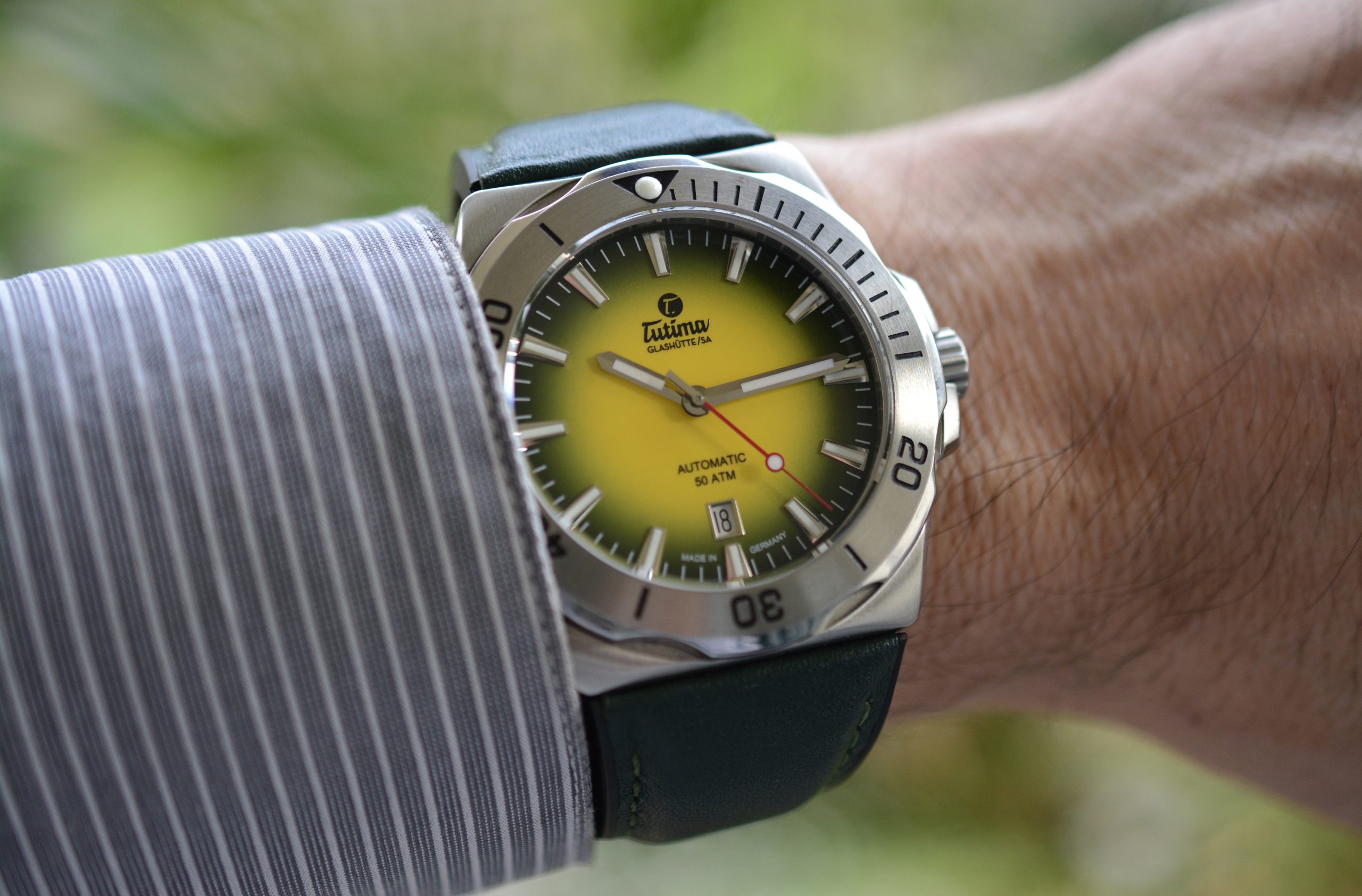 Tutima goes back to 1927 with two companies, Uhren-Rohwerke-Fabrik Glashütte AG (UROFA) and Uhrenfabrik Glashütte AG (UFAG), which reestablished the watch industry in Glashütte after a financial collapse from World War I. The name “Tutima” was initially a designation of the finest pieces from those brands and watches were competitive with Swiss counterparts by the 1930s. In 1941, the now legendary Flieger Chronograph was introduced for the war effort with a total production of around 30,000. Following World War II and the general destruction of the German watch industry, Russian Flieger Chronographs were produced with extra German parts and then new manufacturing. What was left of UROFA-UFAG was nationalized in 1949 with the formation of East Germany, but original founder Ernst Kurtz relocated to West Germany and continued watch production. The Tutima name reappeared on watches by the late 1950s and is an excellent example of independent German watchmaking today. Models from the Grand Flieger collection are faithful to the classic wartime models from the 1940s. 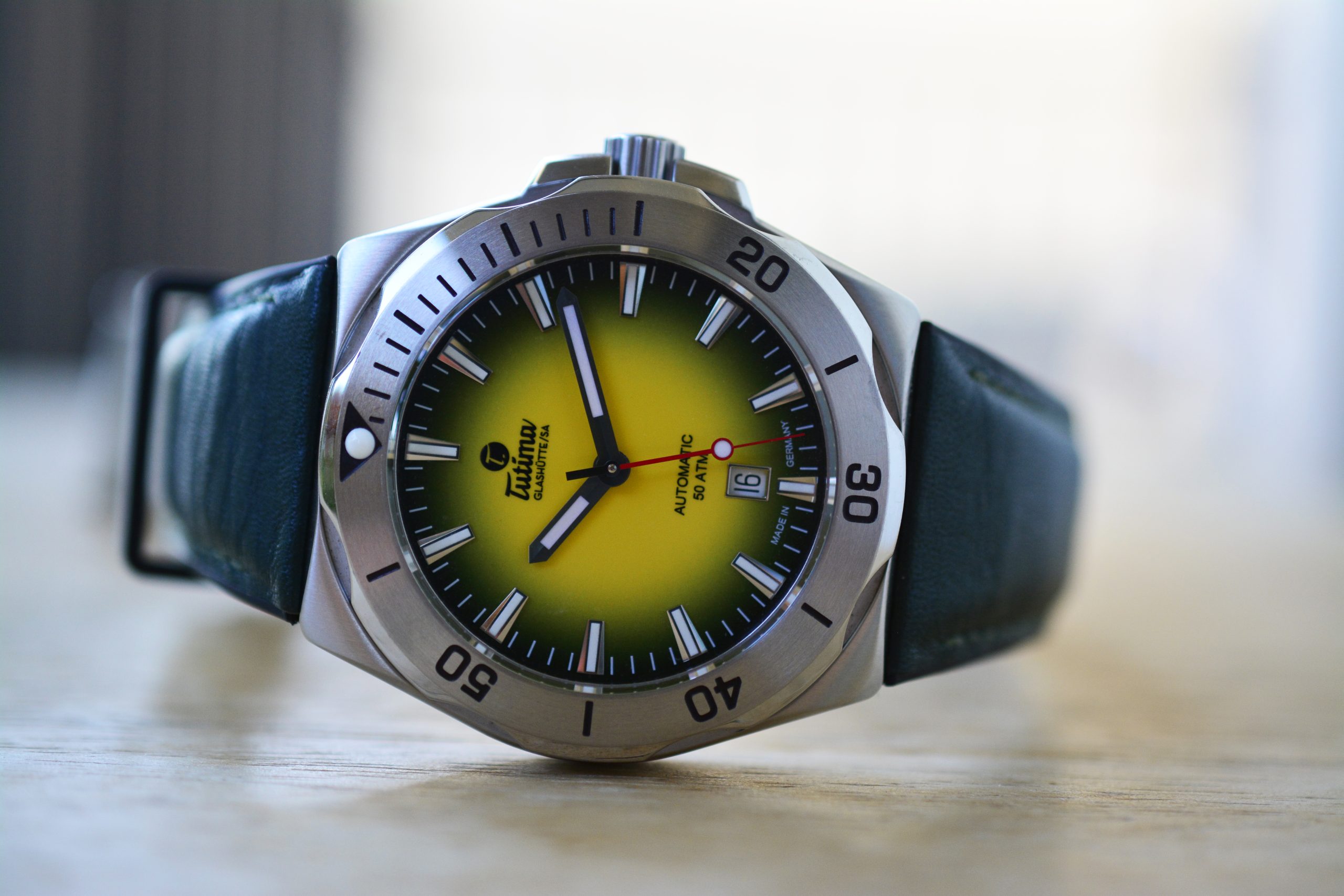 The latest M2 Seven Seas S 6155-09 is truly modern compared to the vintage portfolio sporting rotating fluted bezels and a simple red marker. The stainless steel case is large at 44mm in diameter with a thickness of 13mm, but the size adds to overall functionality for diving. The unidirectional rotating bezel is also steel with a 60-minute scale and detailed 15-minute section. 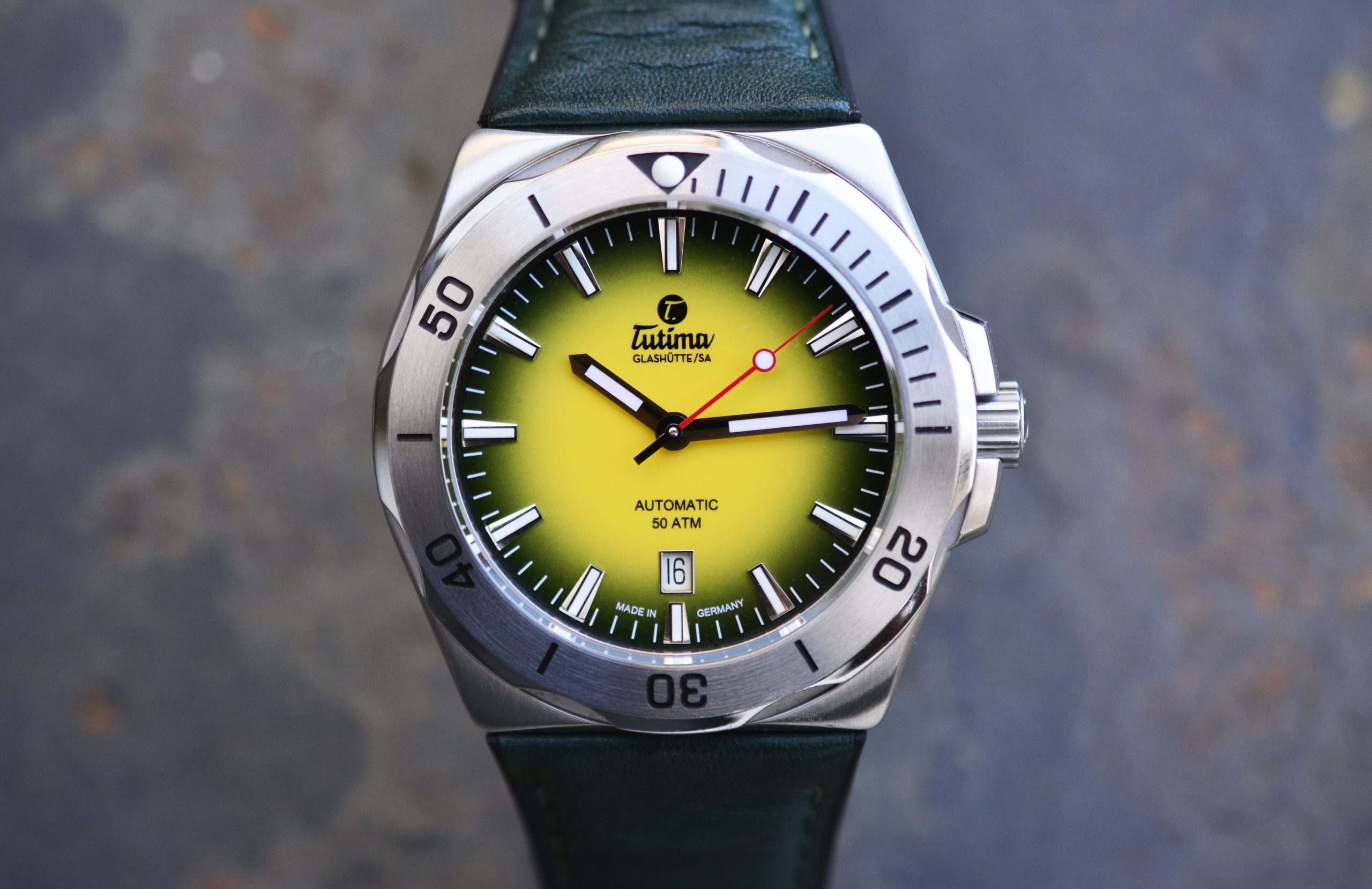 It has a contemporary aesthetic with indentations for the thumb and fingers in lieu of traditional knurling. There aren’t frontal lugs as the strap attaches within notches on the back (via standard spring bars), so the watch wears a bit smaller than the 44mm diameter suggests. 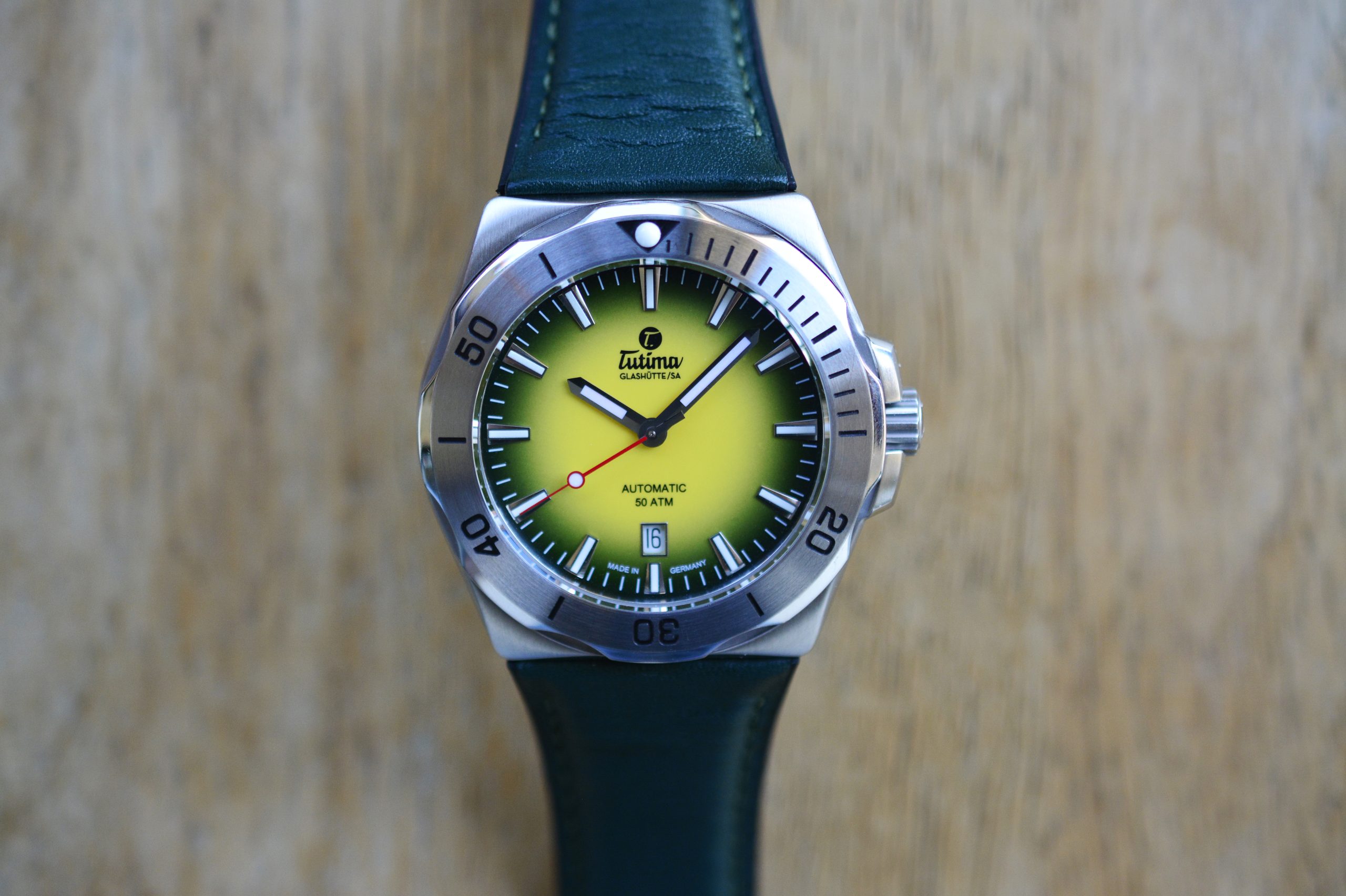 That said, sizeable guards protect the screw-down crown, adding bulk to the right side, and the case is a bit heavy as well. Titanium would’ve helped with the latter, but there’s nothing wrong with a substantial diver. The case back is solid with an embossed depiction of an old sailing ship, while a 3mm AR sapphire crystal protects the dial. It also comes with an impressive 500-meter water resistance rating. The strap is a green leather/rubber hybrid with yellow stitching and folding buckle, while an integrated steel H-link bracelet is also an option. At less than EUR 200 extra, I’d opt for the bracelet. 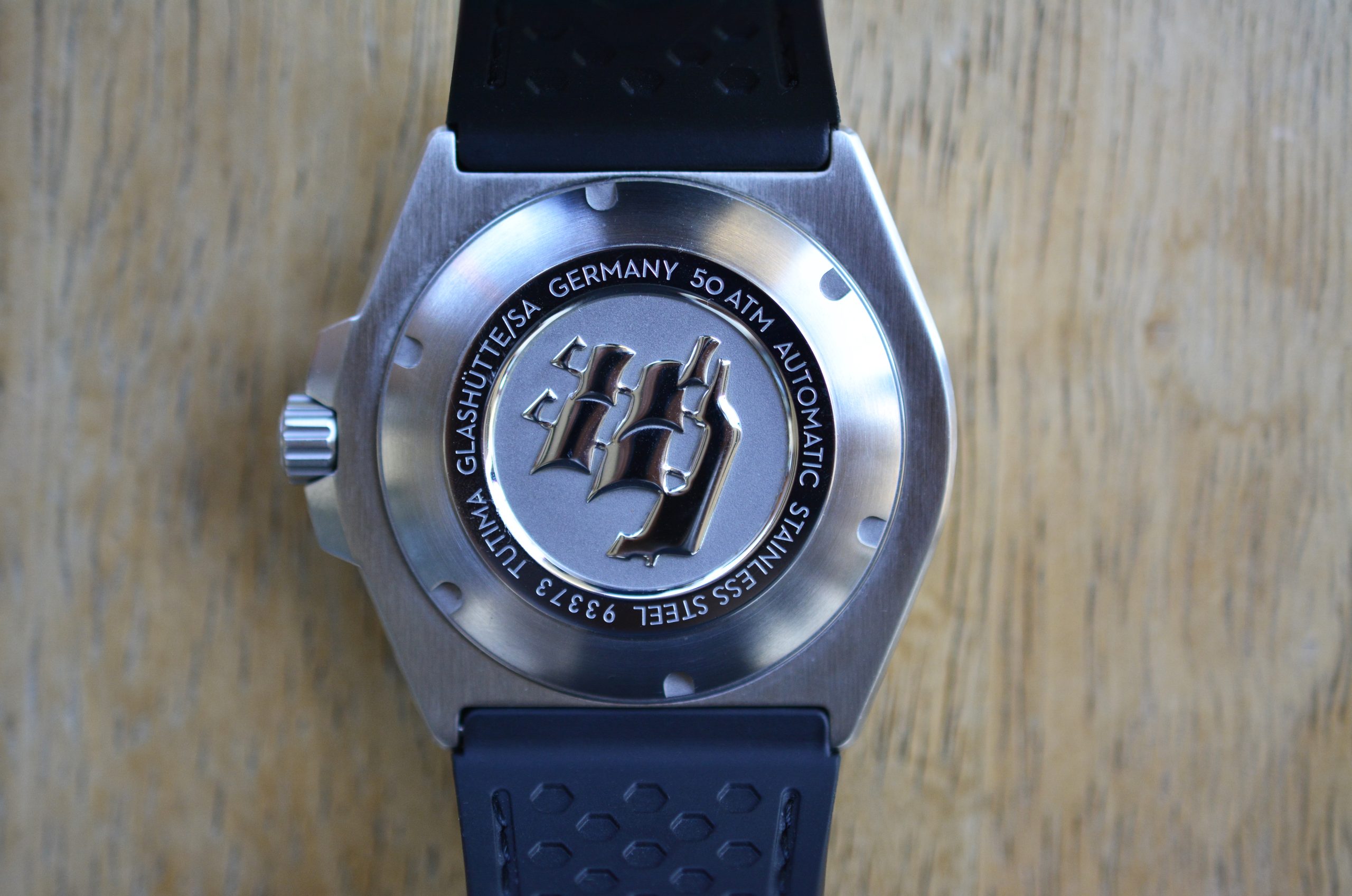 So far, the watch has a bit of a TAG Heuer Aquaracer vibe, but the dial steals the show. It has an unusual yellow gradient effect, fading into a greenish hue before ending in black at the outermost perimeter. It’s different, very legible and a refreshing change from the diver norm. A darker gradient green dial is also available. Large, applied silver indices with Super-LumiNova inserts surround the dial, while silver hour and minute hands also have lume. They don’t pop quite as much as silver against a black background, but everything is clear above and below the water. What does pop is the red lollipop seconds hand with a lume insert. A framed date window tastefully sits at 6 o’clock. I honestly could’ve done without it, but it works well with the dial. 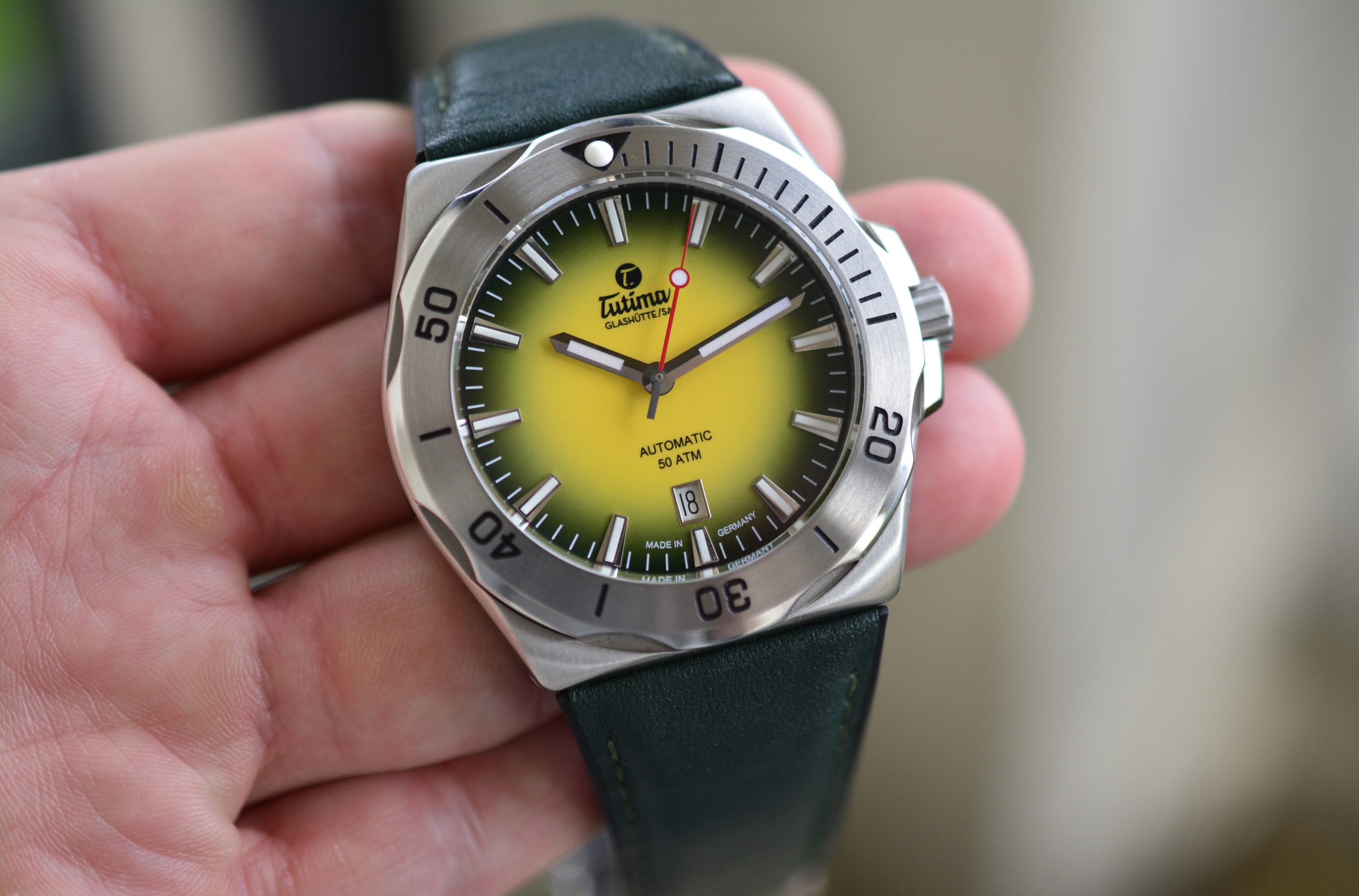 Keeping the lights on is Tutima’s Caliber 330, which is based on the ETA 2824 automatic. It’s not in-house, but you’re getting a proven Swiss workhorse with 25 jewels, a frequency of 4Hz and a 38-hour power reserve. That’s respectable given the price, although it’d be great to see some in-house movements comparable to Nomos offerings. From an accuracy and reliability standpoint, I have no complaints. 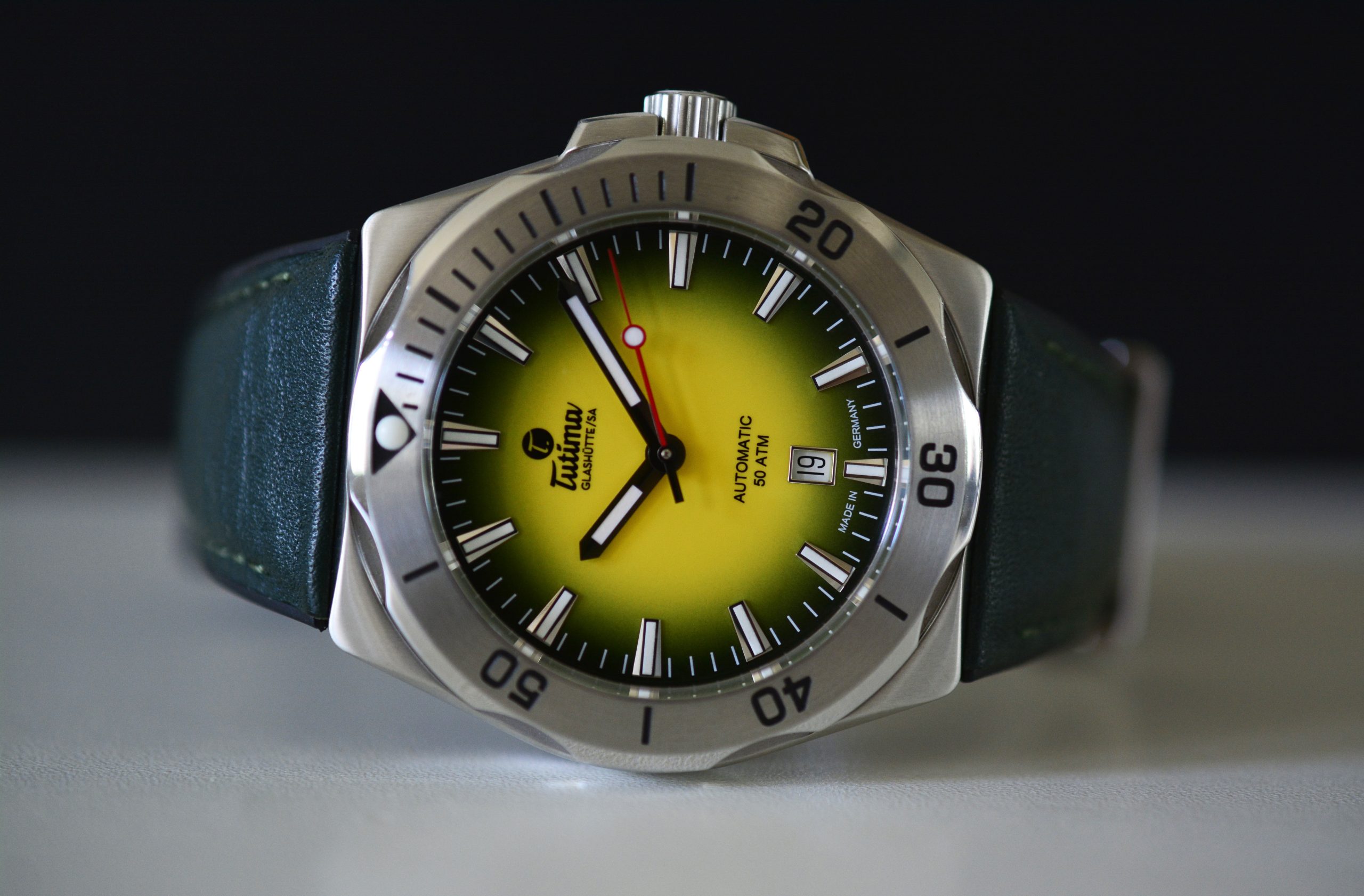 I think Tutima has a winner with this stylish and very capable diver. Anything with a 300-meter depth rating is enough for all recreational and even pro divers, save for the most hardcore saturation divers. The M2 Seven Seas S (ref. 6155-09) goes down to 500 meters, so unless you’re trying to visit the Titanic, the watch is probably up to the task. 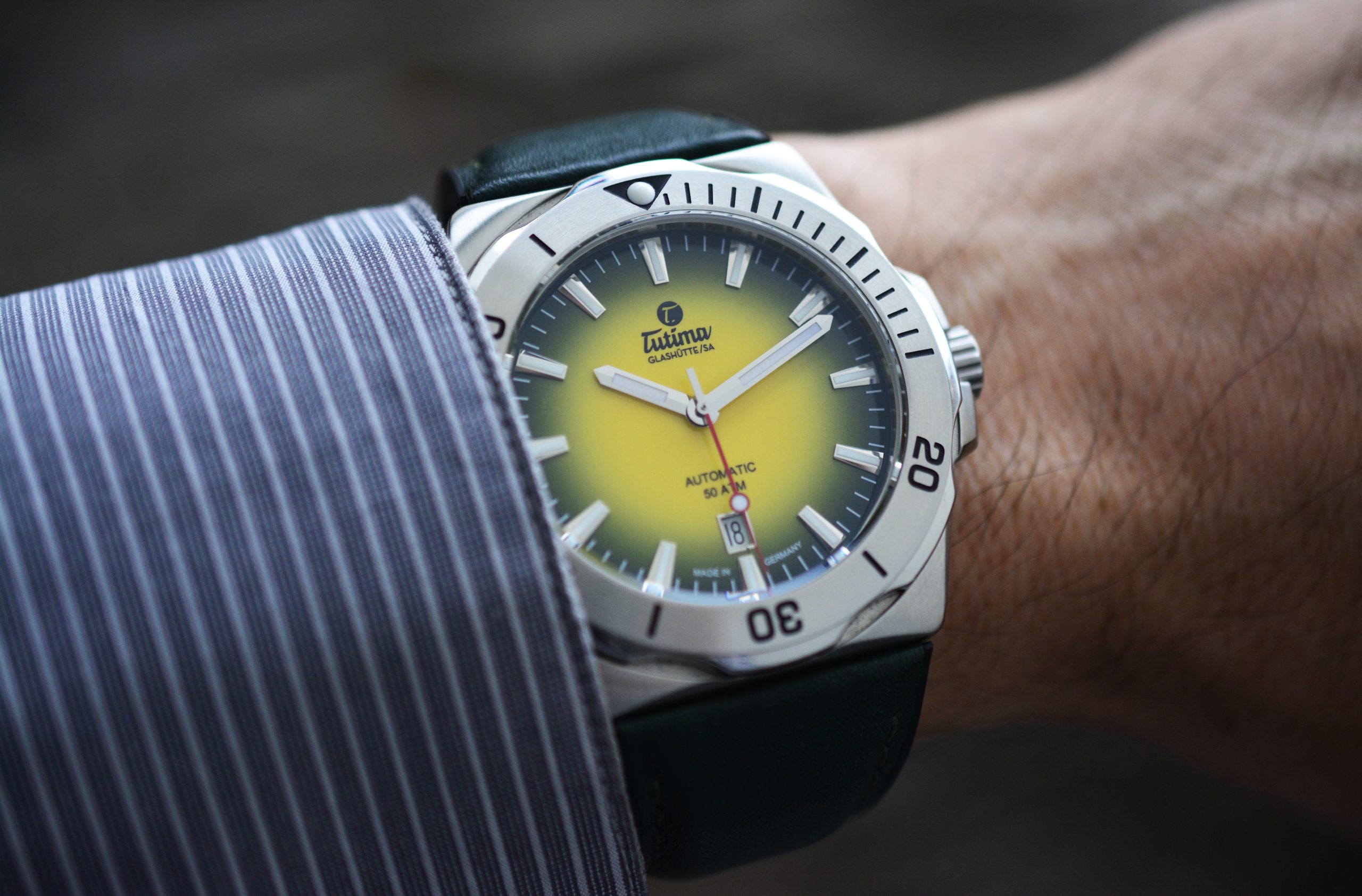 The yellow gradient dial is both cool and legible, and let’s be honest, most buyers won’t be diving with it. It’s stylish for the office or a night on the town, and isn’t a more common Tag Heuer or the like. At only EUR 1,650/USD 1,900 for the strap or EUR 1,830/USD 2,300 for the steel bracelet, it’s also well priced. Tutima might not be the most familiar brand, but it has a long history as a German watchmaker and remains independent with an intriguing, diverse portfolio.