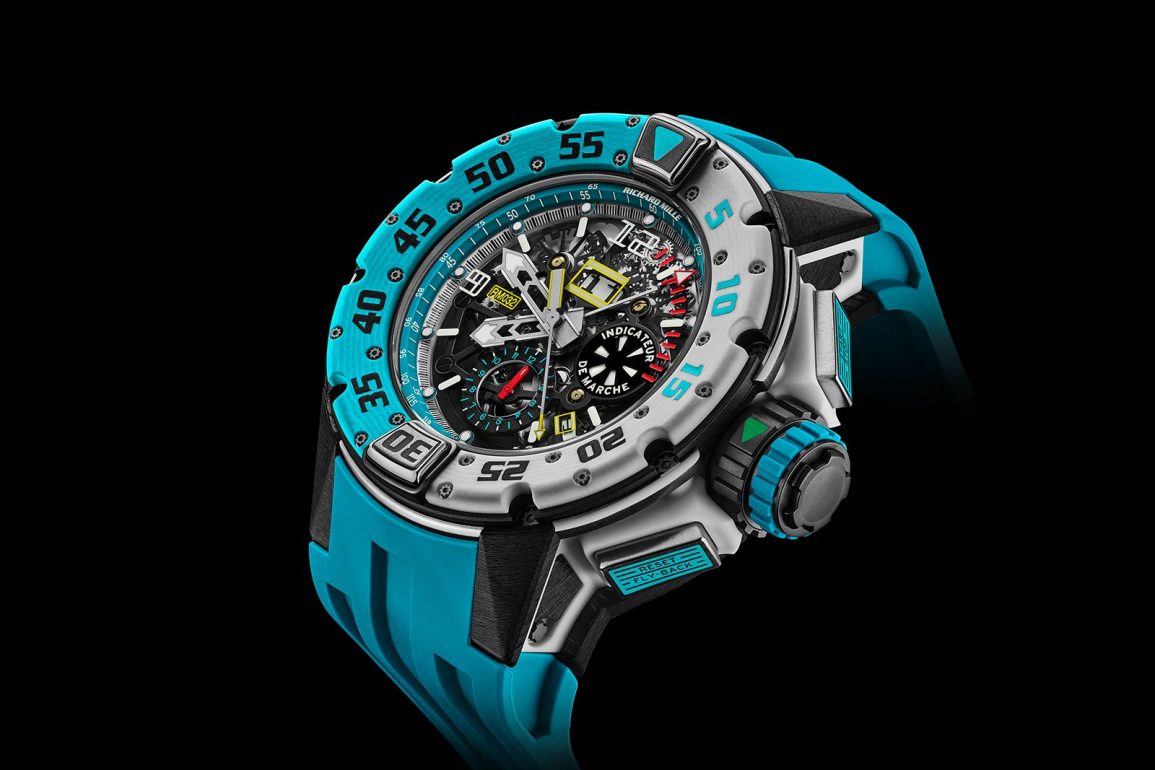 A radical dive chronograph that celebrates the return of Les Voiles de St. Barth, one of the world’s great regattas.

The Covid pandemic created extended disruptions and delays around the globe, and one of the great regattas was paused for two years, Les Voiles de St. Barth. The event’s 11th run was held between April 17th and 23rd, and had 71 teams and 700 sailors race Maxis, Super Maxis, Multihulls, Spinnakers and Melges 24s. Richard Mille has been a main sponsor since 2010 and launched the RM 032 Les Voiles de St Barth to celebrate the regatta’s return. It’s another radically designed and executed piece (diver/chronograph in this case) that backs up its looks with performance, and it’s certainly polarizing. It may not be for everyone (if you can afford it), but it does have an exotic appeal. 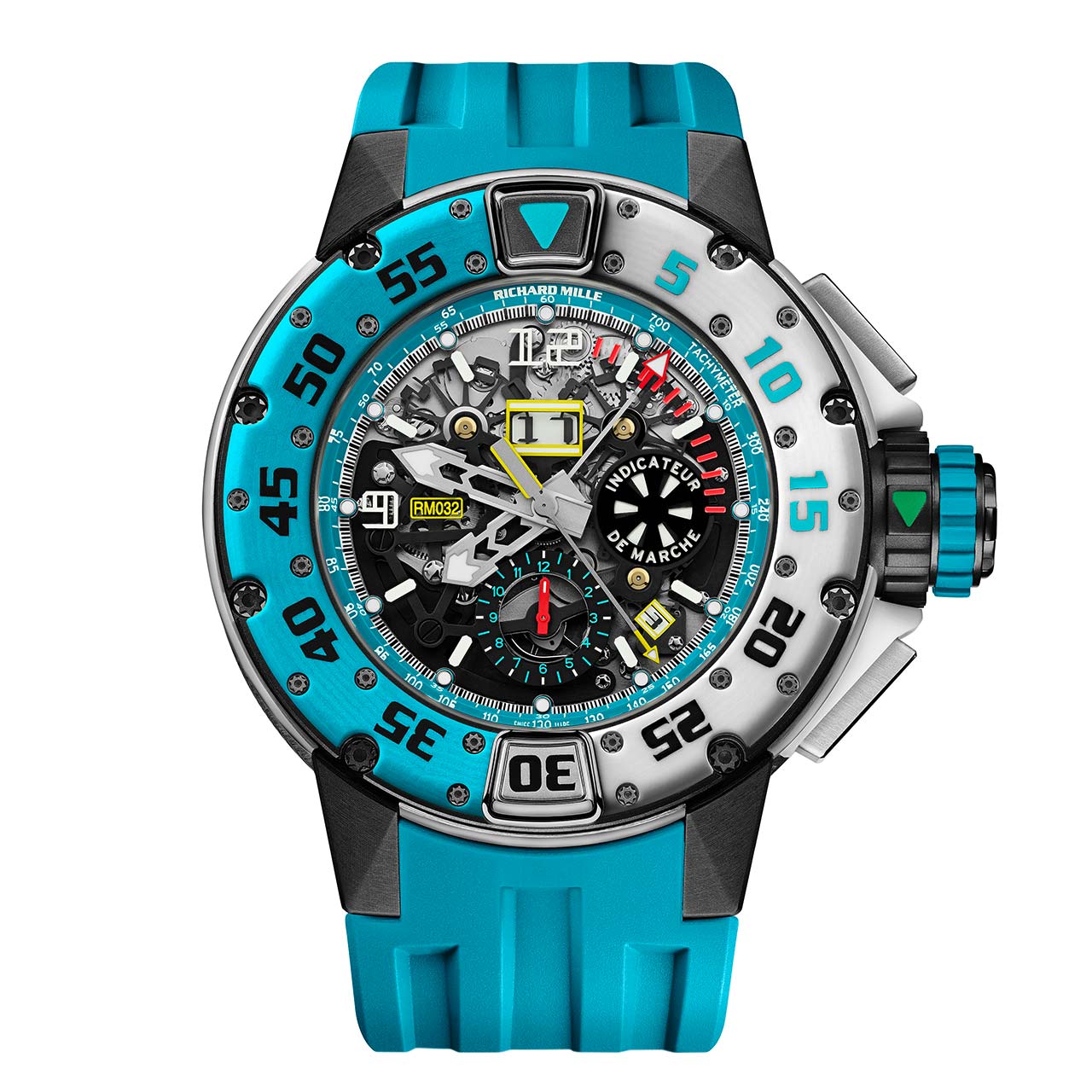 For starters, it’s a huge watch by any standard. At 50mm in diameter and 17.8mm thick, small wrists need not apply. The case materials help keep this behemoth light with a grade 5 titanium case middle and Carbon TPT case back, lugs and inserts. Other than size, Caribbean colors really stand out with an aqua rubber strap, left bezel half (with aqua numerals on the right half for the 15-minute scale) and ring on the crown. White, yellow, red and green are also seen throughout the case and dial. This is an unusual aesthetic for sure, but we know Richard Mille does its own thing (and successfully). 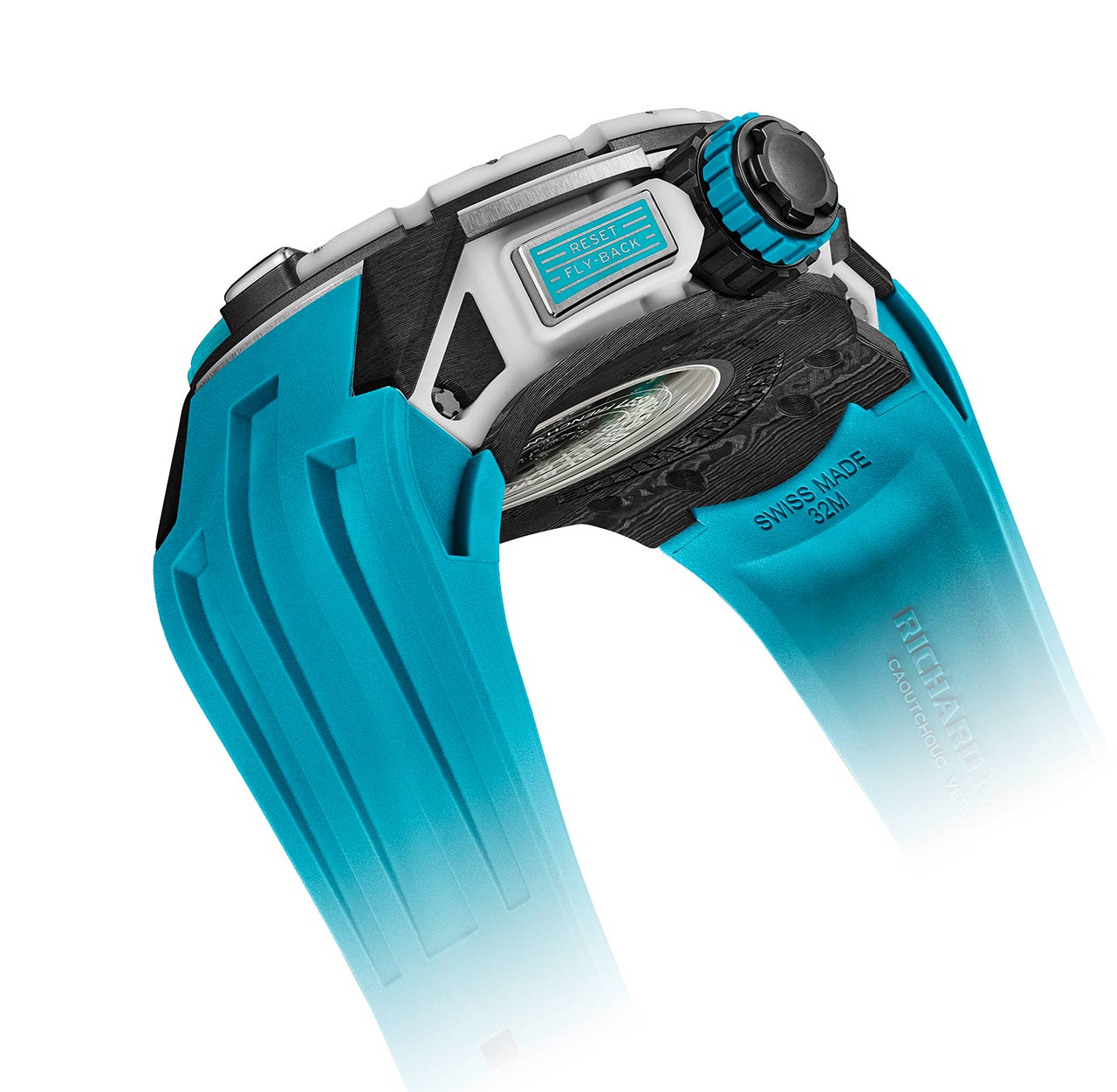 Flat titanium pushers at 2 and 4 o’clock operate the flyback chronograph with the bottom pusher stopping, resetting and restarting the counter with one push. The function is even engraved on the end of the pusher, while START/STOP is engraved on the top pusher. The crown is interesting with the ability to lock both itself and the pushers with the twist of a ring. A colored index indicates the position – green is unlocked and red is locked. The pushers will also lock the unidirectional rotating bezel. There are sapphire crystals front and back, and water resistance is rated at 300 meters with an ISO 6425 rating for dive watches. 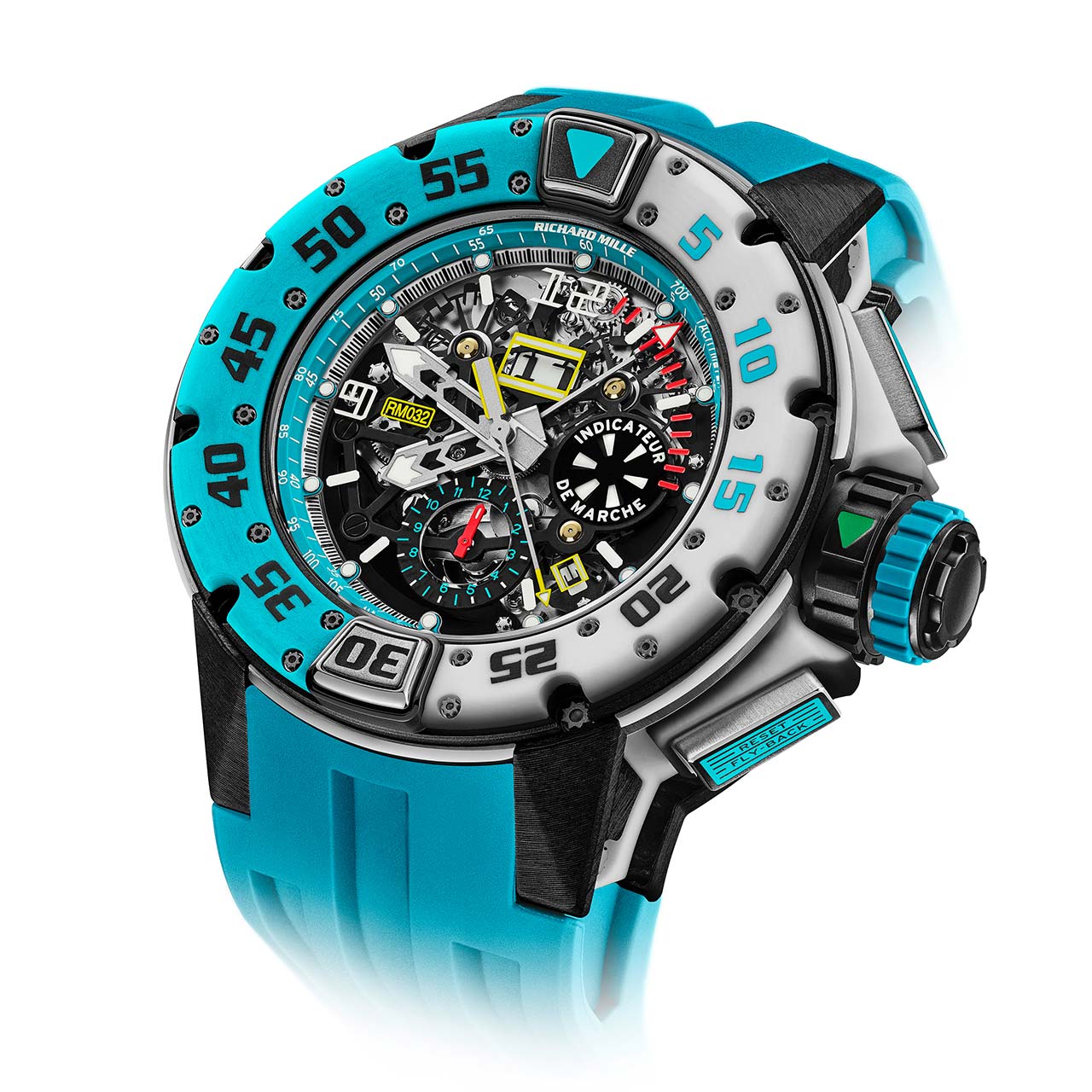 The dial is mostly skeletonized with PVD coated titanium bridges and plates. There’s a series of red lines under the glass to emphasize the 15-minute diver’s scale, and the white indices and 12/9 Arabic numerals seem to be floating just under the crystal. The sword(ish) open-worked hour and minute hands have lume inserts, along with the chronograph seconds and minute hands. Along with being a flyback chronograph, it’s also an annual calendar with the big date under 12 o’clock and month at 4:30. A 12-hour counter sits at 6 o’clock and there’s an “indicateur de marche” at 3 o’clock that rotates at 2 rpms to show that the movement is running (in lieu of a seconds hand). The entire watch is busy, bold and very Richard Mille. 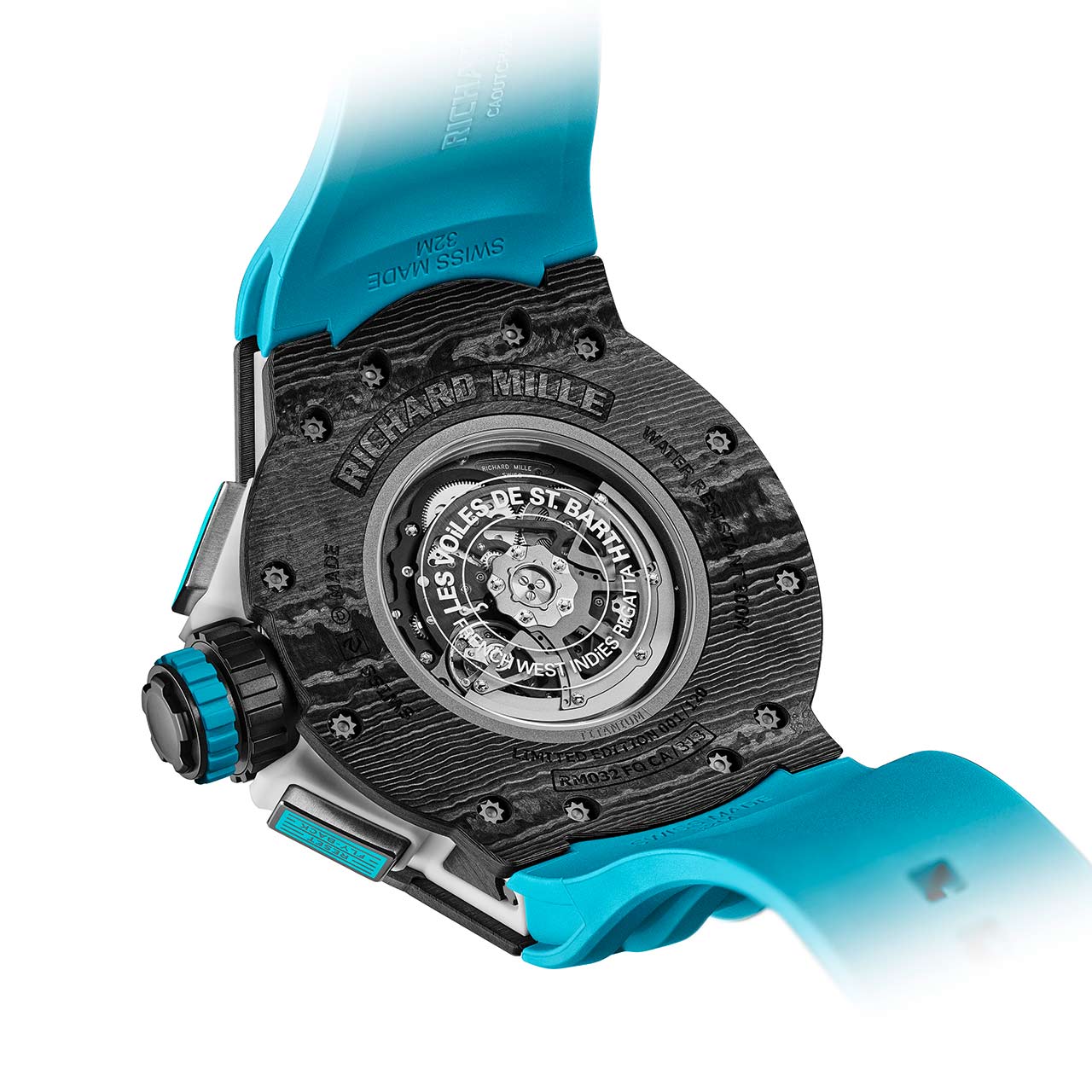 Powering this machine is the automatic RMAC2 Caliber, which has been seen in many Richard Mille models with similar (and different) overall aesthetics to the watch here. It has 62 jewels, beats at 4Hz with a 55-hour power reserve via twin barrels. A real standout is the rotor, which can transform itself much like the sweeping wings of an F-14 Tomcat. This variable-geometry rotor has two open-worked “wings” at the end that can fold into the rotor in six positions, allowing it to spin faster (for casual wearing) or slower (for active sporting events). The case back must be opened for this as it can’t be done on the fly, so it’s not quite user-adjustable. A free-sprung balance with variable inertia also provides greater shock resistance and reliability. 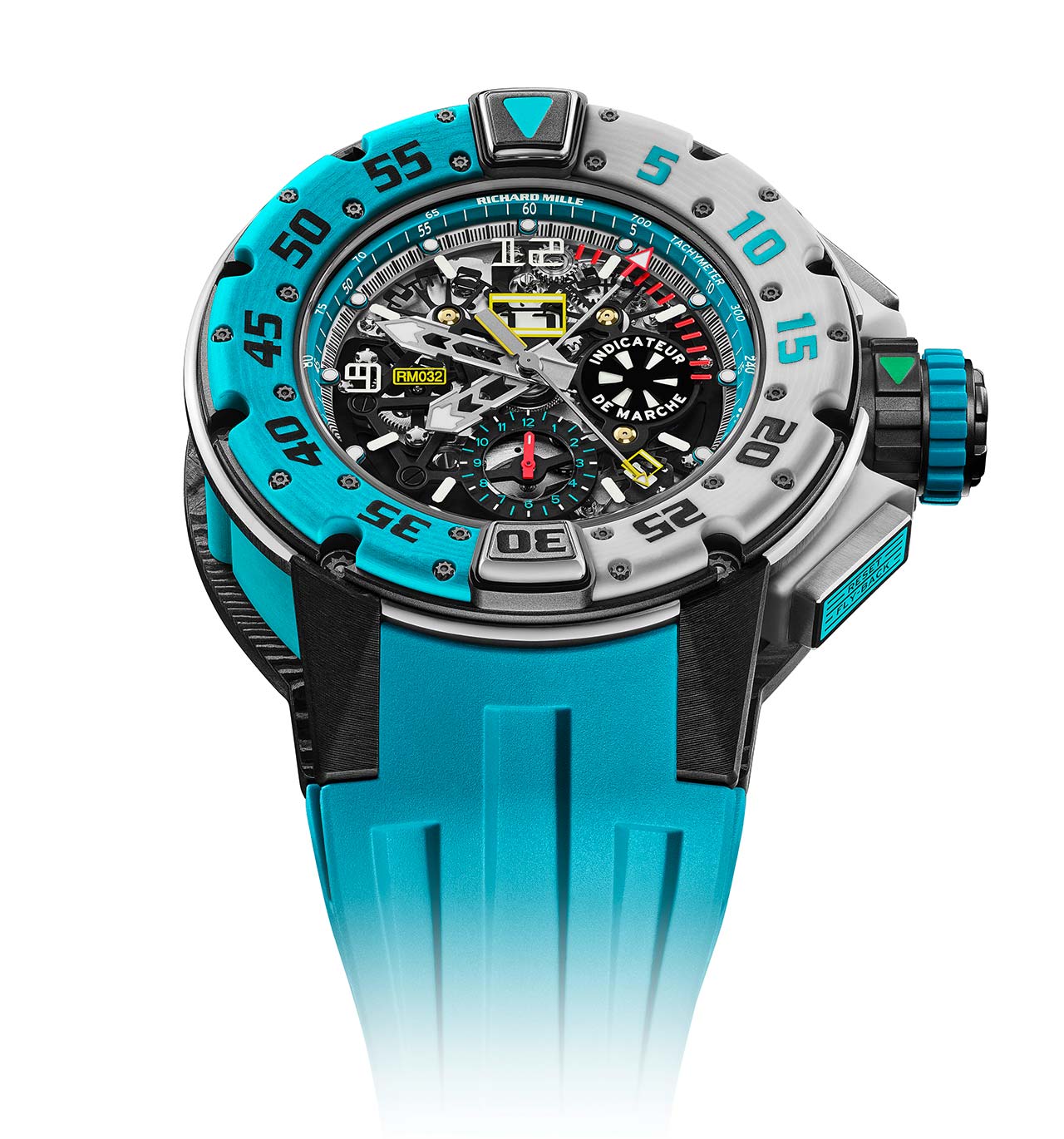 The Richard Mille RM 032 Les Voiles De St. Barth is predictably expensive at EUR 225,000/USD 245,000, and it’s limited to just 120 pieces. So, you might have to sell your Lamborghini if you want one, but it’ll certainly make a statement.