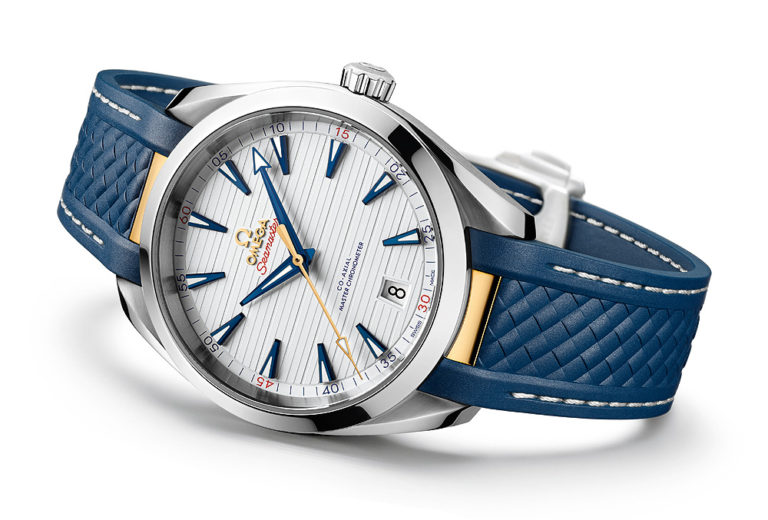 Before we get into the details about the Ryder Cup, let’s go over the Aqua Terra watch base that’s been used. I own an Aqua Terra, a 2014 model, and I can attest to the design and build of the watch. Sure, the design has changed a bit, the teak concept dial is now striped horizontally, and the crown no longer has any shoulders for knock protection, but it’s still the same watch with the similar proportions to mine. As excellent as Omega straps are, their bracelets are even better, and the butterfly clasp is a high-end feeling piece of engineering. The Aqua Terra recently came in first place in our Top 5 Smart Casual Sports watches article for its sporting credentials coupled with restrained design. 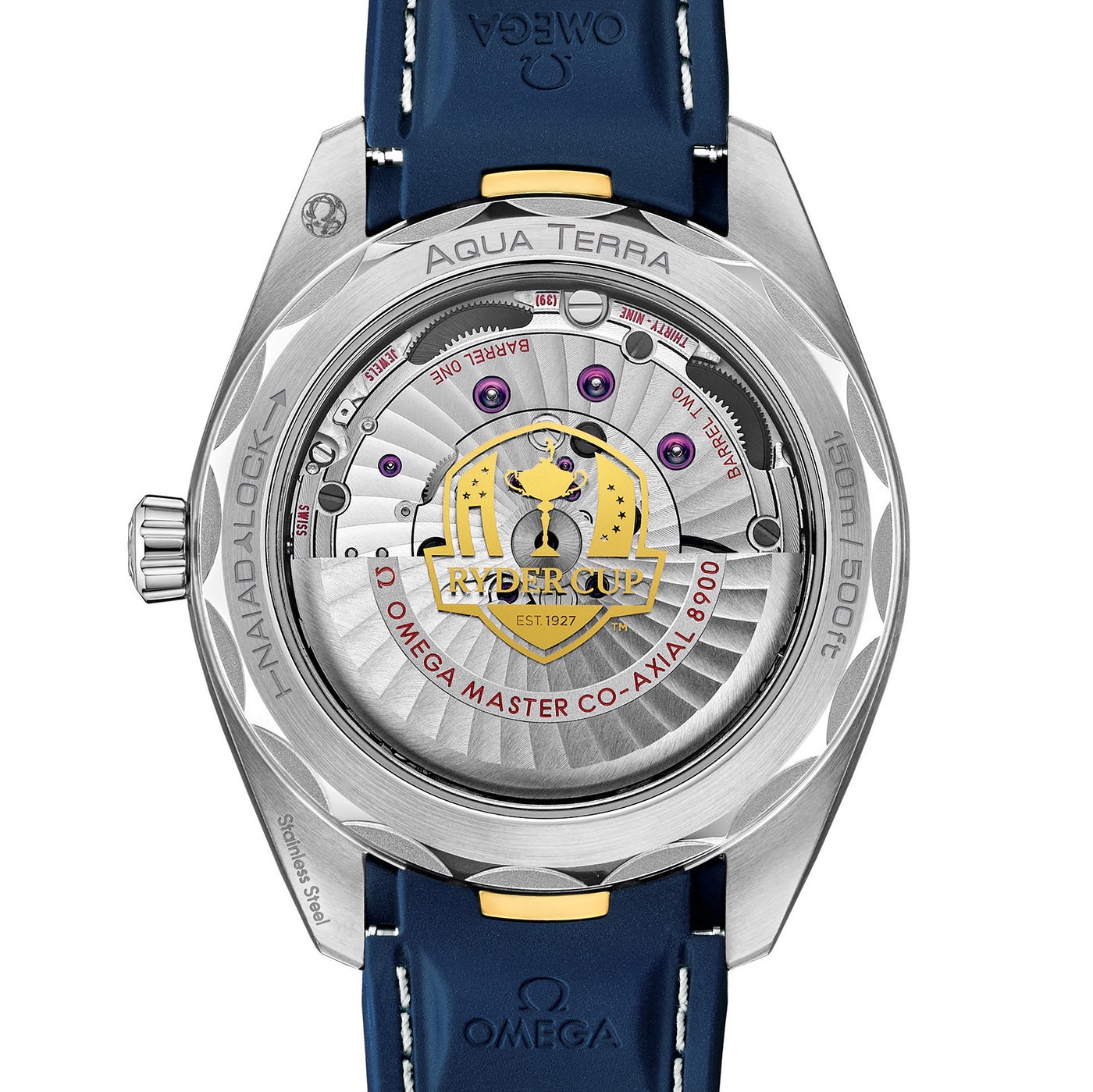 The movement inside the watch is worth a mention as well. In my watch, there is the superb Calibre 8500, but in the new Aqua Terra watches there’s the even more magnificent Calibre 8900. That’s the latest generation of movements from Omega, and it’s on the cutting edge of technology. For example, each watch movement holds a certificate from METAS (Swiss Federal Institute of Metrology), stating that it has met the requirements of the Master Chronometer title. As well as performing to stricter tolerances than an ordinary chronometer, the type issued by COSC, it also includes things such as anti-magnetism, specifically to 15,000 Gauss, Omega is currently the only watchmaker able to make a movement which can withstand that much (you can read more about it in our Jargon Buster article). The more standard specs include a 3.5Hz operating speed, 29 jewels and a power reserve of 60 hours, but the watch is also automatic, so it’s unlikely to run down at all. 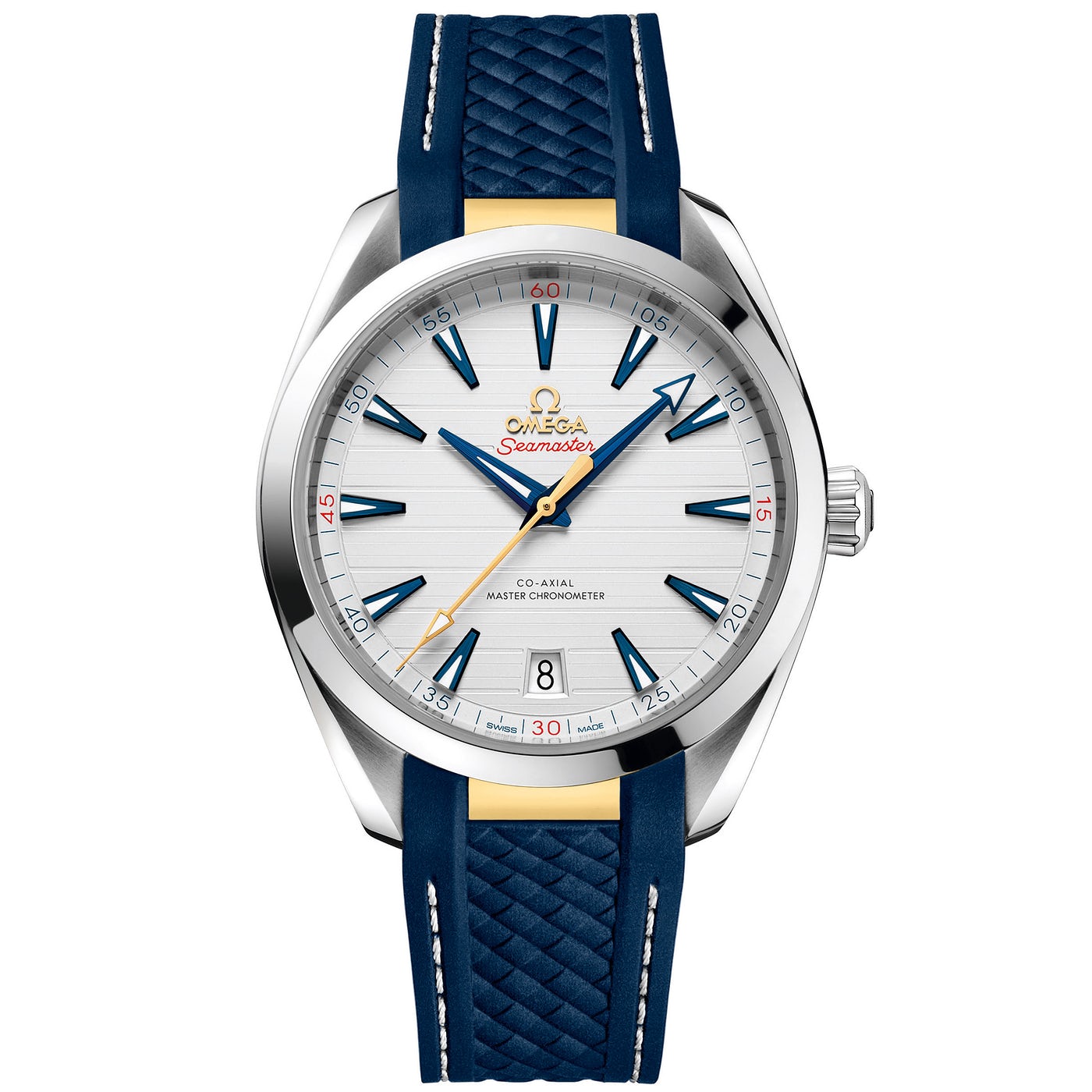 The Ryder Cup is a golfing competition played between teams from Europe and the USA; it’s played every other year and alternates between American and European courses. Omega sponsors a lot of sporting events, most notably the Olympic games, and is also the sponsor for the PGA Tour of America, and it’s the watch chosen by the US team. Through trade deals, Omega also sponsors the Ryder Cup, which this year starts off at the Albatros Course of Le Golf National in France. The colours of this Seamaster reflect those of the Ryder Cup: the white dial makes it quite an elegant piece, the hands are blue along with the strap, and seconds hand, applied Omega logo and strap end links are solid 18K yellow gold. There’s also a 24K gold applied rendering of the Ryder Cup logo on the caseback, something which is understandable that I’m not a fan of all the same.

I’m thrilled to see the Seamaster Aqua Terra has been chosen for this special edition. It’s a classy sports watch that can be used as a dress timepiece if you put it on the bracelet (which this one comes with, as well as the blue strap). Consider that the retail price is $5950 that gets you the watch with a strap and a bracelet, it’s not a bad deal. Visit Omega here.